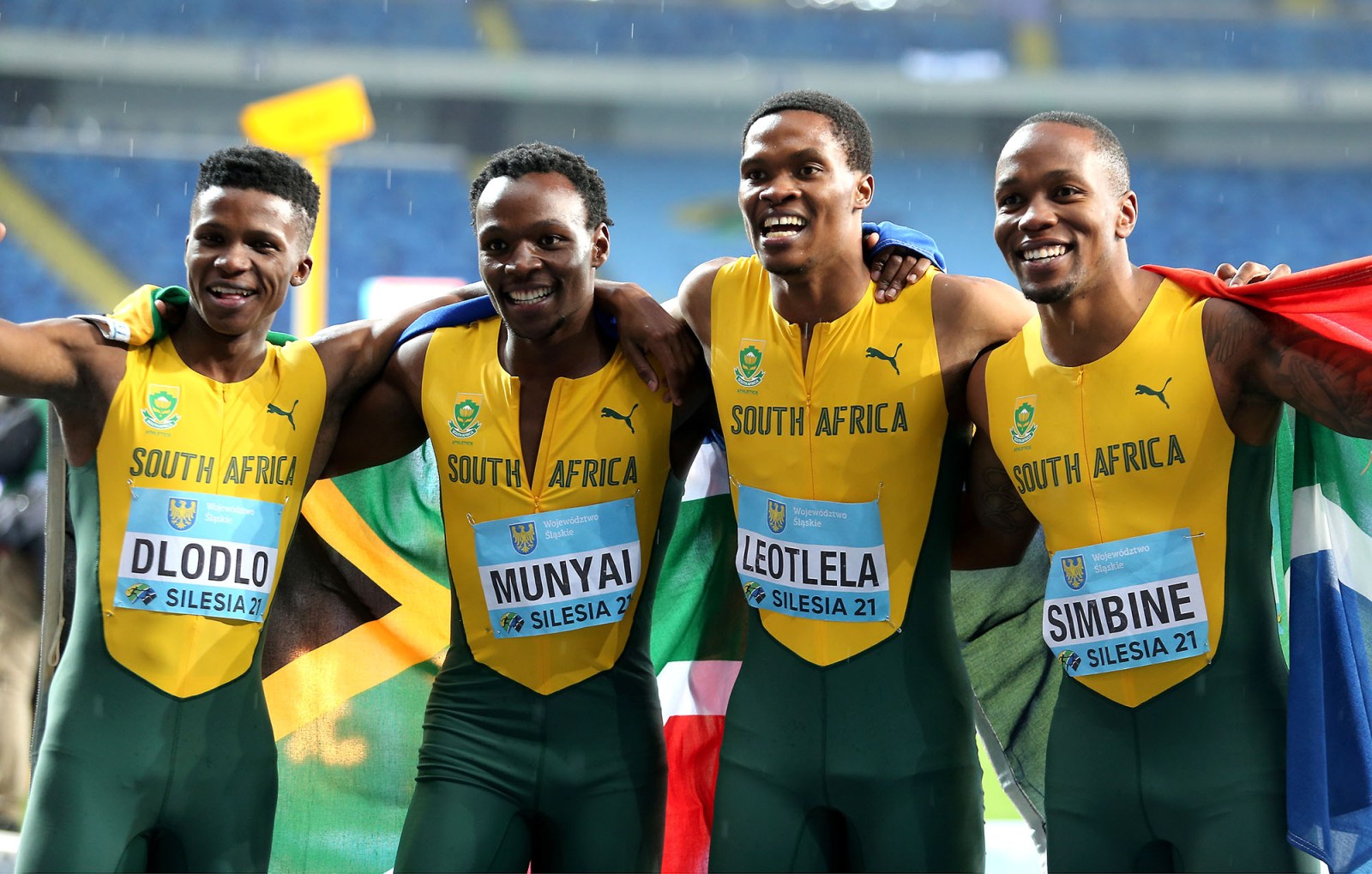 Members of the South African relay team celebrate after competing in the men's 4x100m relay final of the World Athletics Relays Championships at the Silesian Stadium in Chorzow, southern Poland, on 2 May 2021. (Photo: EPA-EFE / Andrzej Grygiel)

Athletics South Africa is introducing a new regime, similar to the way the US runs its track and field programme, in an effort to improve performances at important international events.

With the Covid-19 pandemic seemingly here in part to expose our true colours, there’s a 2020 story that goes a long way towards explaining what the previous Athletics South Africa (ASA) regime was all about.

Athletics was one of the first sporting codes to be given the green light by the government to return to competition, but ASA – probably without a return-to-play plan – politely thanked Minister of Sports Nathi Mthethwa and decided not to have a season that year.

Forget being proactive, this wasn’t even reactive.

Having made similarly positive noises to their predecessors on taking over in May last year, the new bosses at Athletics House – led by president James Moloi – have needed a lot less prompting to get going on their new programmes.

After revealing that it was taking steps to officially align the 100-plus South African athletes studying in the US collegiate system and competing in NCAA events, ASA introduced National Trials, National Relay Championships and a multi-events championship to this year’s calendar.

According to Jean Verster, chairperson of ASA’s Track and Field Commission, the National Trials – scheduled for late May in Durban and taking place about a month after the National Championships – have been put in place to address an age-old problem.

“For years there has been a feeling that our National Champs are too early,” Verster explained. “You select a team in April and they have to compete in August, which is not always ideal because we’ve seen a lot of athletes peak too soon, run well at the SA Champs and, by the time they get to the championships, they are selected for they’re usually out of shape, over-raced or injured.

“In those cases the trials will determine who’s going or staying.”

Verster was at pains to emphasise that the introduction of the trials takes nothing away from the National Championships, which have always doubled up as the event at which athletes could gain national selection.

“We can’t change the National Champs because it’s not just for the select few who make teams or go overseas. It’s based on our summer season. Looking at our juniors, you can’t change it because a lot of our athletes also participate in winter sports like rugby, netball and hockey.

“So, the decision was made to leave the SA Champs where they are and use them for teams that need to be selected by that period, which this year is the African Championships in June, because the team needs to be picked by April.”

Although still missing final details, because ASA will run it past the athletes in a meeting on 22 January, Verster had a stab at explaining how the trials will work: “To qualify for the trials you have to compete at the nationals, so you can get an invite to the trials.

“If you’re in the US [such as Wayde van Niekerk and Shaun Maswanganyi] you’ll have an exemption [due to travel restrictions] but you have to compete at the trials.

“We haven’t decided exactly on the numbers, but let’s say the first eight to 12 at the National Champs get invited to the trials.

“So you’ll be invited to the trials … obviously there are other factors like IAAF [International Amateur Athletics Federation] qualification standards, but in events where we have depth the trials will be used to make sure we select the right people. But the first year is going to be a bit of a trial, if you’ll pardon the pun.”

“We’re not going to invite athletes to the trials if they skip the SA Championships. The only thing that can get you an invite if you don’t turn up is a medical or Covid reason,” he said.

“We don’t want to water down the National Champs, so your SA Champs’ performance will determine if you go to trials or not.

“We also want to get the culture of winning the National Championships being an honour back. There will be no medals for winning at trials, just team selection.”

The decision to introduce the National Relay Championships is a strategy aimed at engineering “cheap” medals and avoiding lack-of-practice issues such as dropping the baton in the Olympic heats, as Team SA did in the 4x100m last year.

“We need to establish a culture of relays in the country,” Verster explained. “Relays are not easy, but the Polish have proved to us that you can work at them, and South Africa has huge potential in that regard.

“We have depth and, if we can develop our relay squad as a squad instead of a bunch of individuals, the sky’s the limit.

“When I ran in the US they had a culture of relays and that’s proved by how well they’ve always done in them.”

Verster said the idea was to start a relay culture from the bottom up by getting the provinces to buy into the vision, sending teams to the National Relay Champs and building depth over the next few years.

“We heard that, going forward at the next Olympics and World Championships, there’ll be more and more relay events, instead of just the 4x100m and the 4x400m, so relays are going to be an opportunity for us to win medals there.

“I’m not saying it’ll be easy, but it’s definitely easier to medal in a relay than it is in an individual event.”

He pointed out that the raw materials were already in place for South Africa to be a heavyweight in relays: “If you look at the 4x400m women’s relays, we’ve got a helluva chance to make it to the World Champs and do well because several women have run in the 52-53 second range in the 400m.

“We’ve also done well in the men’s 4x100m [in which the team won gold at the World Relay Championships in Poland last year] and even in the juniors we won by a world record.

“We now sit with a team that’s won the world relays and are medal candidates – obviously you don’t win by dropping the baton – so we have to capitalise.

“We could be one of the superstar nations if we put a lot of effort into the relay.”

Verster added that the thinking behind the Multi-Events National Championship, which will be held the same day as the Relay Champs in Mpumalanga and involve both juniors and seniors, was to give those athletes an opportunity to participate in their best events at the National Champs.

“By kind of giving the multi-events their own championships, like the relays, they get a bit more limelight, as opposed to almost filling the gaps at the National Championships proper.

“We don’t have all the answers or have a miracle plan. But we can’t sit around and not try things.”

ASA’s new managers may not have all the answers yet, but at least they’ve shown more innovation than the previous regime managed in all its time in office. DM168