With the Federal Reserve intending to withdraw stimulus from the market, riskier assets the world over have suffered. Bitcoin, the largest digital asset, lost more than 12% Friday and dropped below $36,000 to its lowest level since July. Since its peak in November, it has lost over 45% of its value. Other digital currencies have suffered just as much, if not more, with Ether and meme coins mired in similar drawdowns.

Bitcoin’s decline since that November high has wiped out more than $600 billion in market value, and over $1 trillion has been lost from the aggregate crypto market. While there have been much larger percentage drawdowns for both Bitcoin and the aggregate market, this marks the second-largest ever decline in dollar terms for both, according to Bespoke Investment Group.“It gives an idea of the scale of value destruction that percentage declines can mask,” wrote Bespoke analysts in a note. “Crypto is, of course, vulnerable to these sorts of selloffs given its naturally higher volatility historically, but given how large market caps have gotten, the volatility is worth thinking about both in raw dollar terms as well as in percentage terms.” 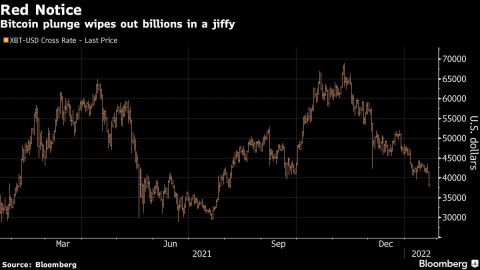 With the Fed’s intentions rocking both cryptocurrencies and stocks, a dominant theme has emerged in the digital-asset space: cryptos have twisted and turned in nearly exactly the same way as equities have.

“Crypto is reacting to the same kind of dynamics that are weighing on risk assets globally,” said Stephane Ouellette, chief executive and co-founder of institutional crypto-platform FRNT Financial. “Unfortunately for some of the mature projects like BTC, there is so much cross-correlation within the crypto asset class it’s almost a certainty that it falls, at least temporarily in a broader alt-coin valuation contraction.”

Crypto-centric stocks also dropped on Friday, with Coinbase Global Inc. at one point losing nearly 16% and falling to its lowest level since its public debut in the spring of 2021, Bloomberg data show.

MicroStrategy Inc. tumbled 18% while the Securities and Exchange Commission said the company can’t strip out Bitcoin’s wild swings from the unofficial accounting measures it touts to investors. The enterprise software company’s pile of Bitcoin has effectively made its shares a proxy for the digital asset.

Meanwhile, the Biden administration is preparing to release an initial government-wide strategy for digital assets as soon as next month and task federal agencies with assessing the risks and opportunities that they pose, according to people familiar with the matter.

Read more: Crypto Diehards Are About to Find Out If It Really Was a Bubble

Antoni Trenchev,, Nexo co-founder and managing partner, cites Bitcoin’s correlation to the tech-heavy Nasdaq 100, which right now is near the highest in a decade.

“Bitcoin is being battered by a wave of risk-off sentiment. For further cues, keep an eye on traditional markets,” he said. “Fear and unease among investors is palpable.”

Take also the correlation between Bitcoin and Cathie Wood’s ARK Innovation ETF (ticker ARKK), a pandemic poster-child of speculative risk-taking. That correlation stands at around 60% year-to-date, versus about 14% for the price of gold, according to Katie Stockton, founder and managing partner of Fairlead Strategies, a research firm focused on technical analysis. It’s “reminding us to categorize Bitcoin and altcoins as risk assets rather than safe havens,” she said. 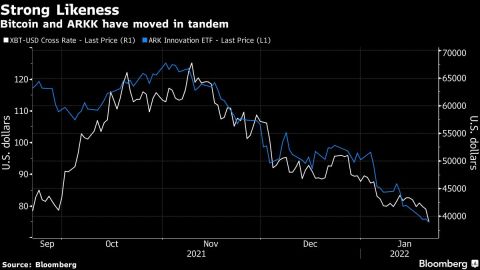 Meanwhile, more than 239,000 traders had their positions closed over the past 24 hours, with liquidations totaling roughly $874 million, according to data from Coinglass, a cryptocurrency futures trading and information platform.

Though liquidations have spiked, the numbers are relatively muted when compared to previous declines, according to Noelle Acheson, head of market insights at Genesis Global Trading. Acheson points out that Bitcoin’s one-week skew, which compares the cost of bearish options to bullish ones, spiked to almost 15% on Wednesday compared to an average of about 6% in the past seven days.

“This flagged a jump in bearish sentiment, in line with overall market jitters given the current macro uncertainty,” she said.

Kara Murphy, chief investment officer at Kestra Investment Management, said cryptocurrencies have a life of their own but that the recent slump is rational.

“It makes sense as people start to retrench a little bit, look for something that’s a little bit more solid, they’re gonna move away from crypto,” she said. “On the margin, with folks becoming more risk averse, crypto will suffer from that.”

–With assistance from Justina Lee, Emily Graffeo and Ed Ludlow.