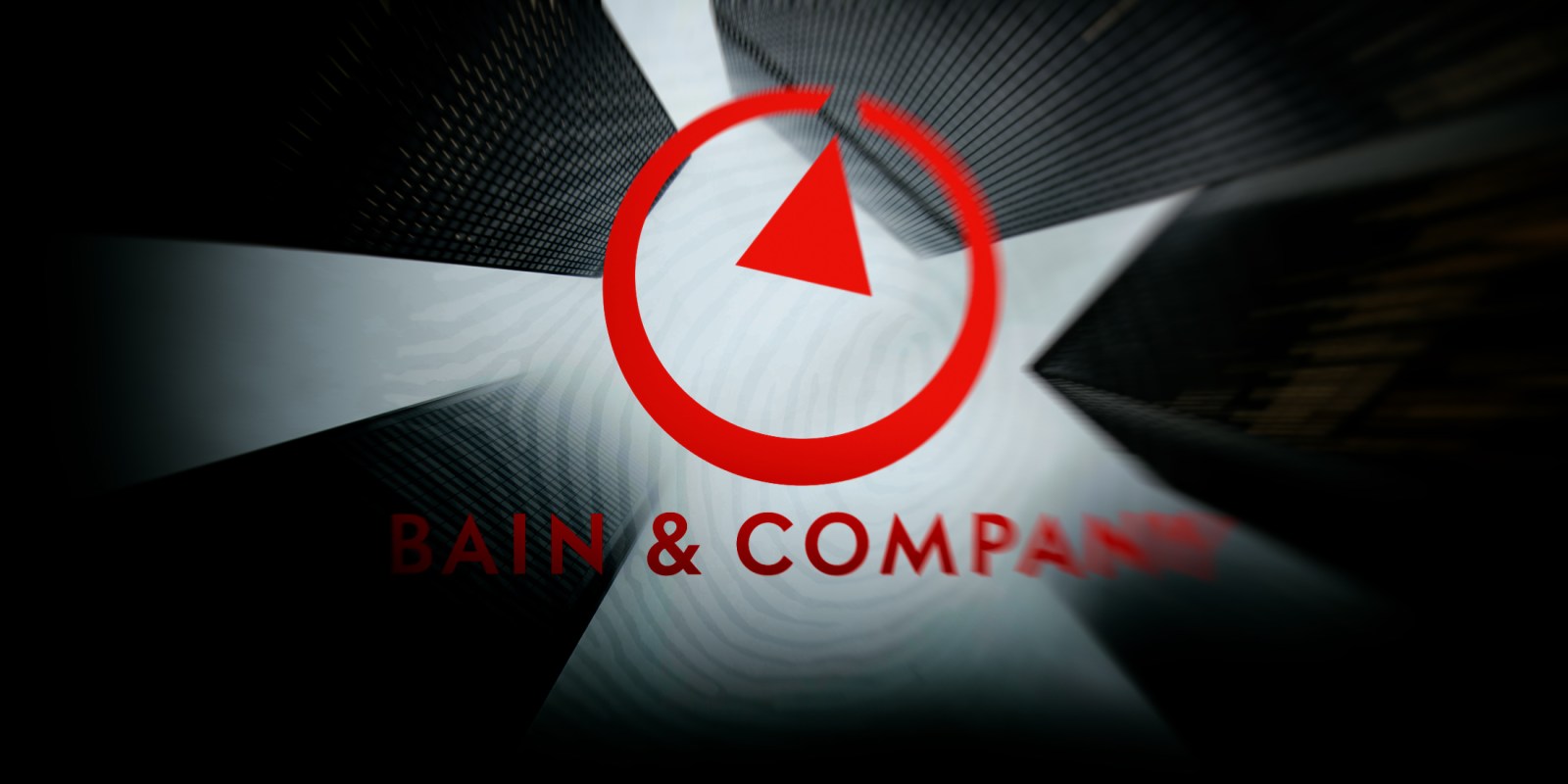 Bain, a serial offender, has outlived its reason to exist. It is everything that is wrong with crony capitalism. It stoked a destructive scorched earth policy of corruption to fill its coffers.

John le Carré would be licking his lips. This is Dante’s hellish inferno wrapped in a perverse spy thriller, with its twisted secrecy in the shadowy black ops world of intelligence agencies that nearly imploded South Africa’s economy and democracy in the country. Perhaps Deon Meyer can step in now that Le Carré has died.

Following three years of testimony and hundreds of witnesses, acting Chief Justice Raymond Zondo issued the first of a three-part report concluding that the state was “captured” during former president Jacob Zuma’s rule, with top government officials and the private sector colluding to loot taxpayer funds.

The damning report fingered leading global consulting firm Bain, based in Boston, Massachusetts. It shows that Bain’s entire existence is based on corporate opportunism of relationship consulting. An army of thousands of consultants in a veneer of silky lingerie seducing our spineless leaders saw a marionetting spider web of corruption that sought to gut not only the heart of our state, the SA Revenue Service (SARS), but also to restructure powerful sectors of our economy to feed its coterie of accomplices.

And the report confirmed what was already known and exposed in a previous judicial commission of inquiry into SARS headed by Judge Robert Nugent.

Bain, a serial offender, has outlived its reason to exist. It is everything that is wrong with crony capitalism. It stoked a destructive scorched earth policy of corruption to fill its coffers. And then it rolls out its apparatchiks to pretend there is no smoke. Worse. That there is no fire. And that they are white knights of renewal and ethical governance. Lying when the evidence is in broad daylight.

Bain’s dirty fingerprints are all over South Africa’s “State Capture Project”. Its hijack strategy nearly robbed us of our victory over racial hate and the painstaking efforts of countless generations that sacrificed so much, their lives, their families and their careers.

No. Let them sweat in the dock of public opinion, alongside the “Rogues’ Gallery” that has paraded before Zondo’s Commission of Inquiry into State Capture.

All evidence points towards their guilt. Paying back their ill-gotten gains does not absolve them or erase their insidious crime that has led to the destruction of so many state-owned companies delivering vital basic services to millions and causing thousands of job losses.

What we need is the truth. For Bain to come clean. For its global leadership to take responsibility. And as for Business Leadership South Africa (BLSA), the problem does not disappear. Business cannot glibly argue “the work the firm undertook to redeem itself ultimately satisfied the board that it qualified to be readmitted,” which it claimed when it was readmitted. And stepping down from BLSA does not absolve them.

Bain should not get a free pass out of jail just because they returned stolen cash. A bank robber does not get off scot free because he returns the cash. In our country’s history of distorted economics, at the core of apartheid was a cheap labour system that empowered a white minority to grow wealthy on the back of black oppression. How different is it now? Predominantly white companies protecting their own is how the overwhelming majority of black people see it. And global companies like Bell Pottinger, McKinsey, SAP and KPMG were also complicit in exploiting those festering wounds of our past.

Company executives paying fines in the hope of exonerating themselves are unethical and fraudulent. In damaging SARS, Bain robbed us of vital resources to tackle the enormous economic, hunger and social crisis arising from the Covid pandemic.

Zondo has called for all of Bain’s work in the South African public sector to be re-examined and investigated. And this must go back to the opening of the Bain offices in Johannesburg in 1997 and its role in South African Airways (SAA) and the bringing in of Coleman Andrews to run SAA.

The government needs to immediately disclose if there are any other contracts it has signed with Bain, and to demonstrate seriousness in taking up the investigative and prosecutorial steps to implement Zondo Commission findings.

If Bain wishes a different future then it has to accept full accountability and admit to its wrongdoing. Not give us spin.

“We have offered full cooperation to enforcement authorities and will continue to do so. We have since taken comprehensive action to ensure that we do not repeat our past mistakes,” it claims.

What are these decisive steps?

We know that Bain has not cooperated with the Zondo Commission. We know that they offered Athol Williams, the outspoken whistle-blower, huge sums of money to buy his silence and complicity – an offer he rejected.  Zondo acknowledged this as the type of courageous whistle-blowing that will restore credibility, good governance and ethical leadership in SA.

We know that the former Bain South Africa boss, Vittorio Massone, a prominent puppet mastermind of State Capture, has landed a top job in Milan, Italy, as executive director of Alkemy, an Italian-listed digital marketing company, despite being the mover behind the management consultancy’s capture of SARS.

So what should SA do?

We should demand full disclosure, and charges should be brought against Bain in SA. The National Prosecuting Authority needs to do the job it was set up for and with the SAPS investigate and prosecute all officials implicated by the Zondo report without delay.

And our government needs to use the US Foreign Corrupt Practices Act passed in the US Congress in 1997, which targets bribery of foreign government officials by publicly traded corporations or US persons, to start legal proceedings in the US. The law’s main provisions include, anti-bribery, and it states that “Individuals and businesses are prohibited from bribing foreign officials in order to retain or obtain business.” It also provides for the protection of whistle-blowers.

Bain is required by this law to keep books, records, and accounts to accurately reflect the transactions of corporations. Issuers are prohibited from falsifying these records. Issuers must also devise and maintain an adequate system of internal accounting controls. All of this must be subpoenaed and placed in the public arena.

There is no reason for leniency for serial offenders of corrupt business practices. The evidence is there for all to see, and it has been confirmed by detailed investigations on the part of the independent media and the most senior and competent judges in our judiciary, by whistle-blowers like Williams and scores of other eminent South Africans and diligent civil servants.

When the rich and the powerful conspire like this then all we can expect is a shattered world of broken dreams, broken spirits, broken bodies, and a broken country.

An emergent nexus of control, rising authoritarianism and profiteering on an unimagined scale is what is leading to failed states, an environmental apocalypse and the dimming glimmer of hope in our world.

It’s the CEOs of these companies that need to go to jail – to restore the credibility of democracy, the rule of law and the end of hypocrisy and double standards of corporate governance in relation to these oligarchic global companies. DM

Jay Naidoo is founding General Secretary of Cosatu, a former minister in the Nelson Mandela government and is a Board member of the Mo Ibrahim Foundation.