All political parties must desist from inflaming xenophobia against migrants 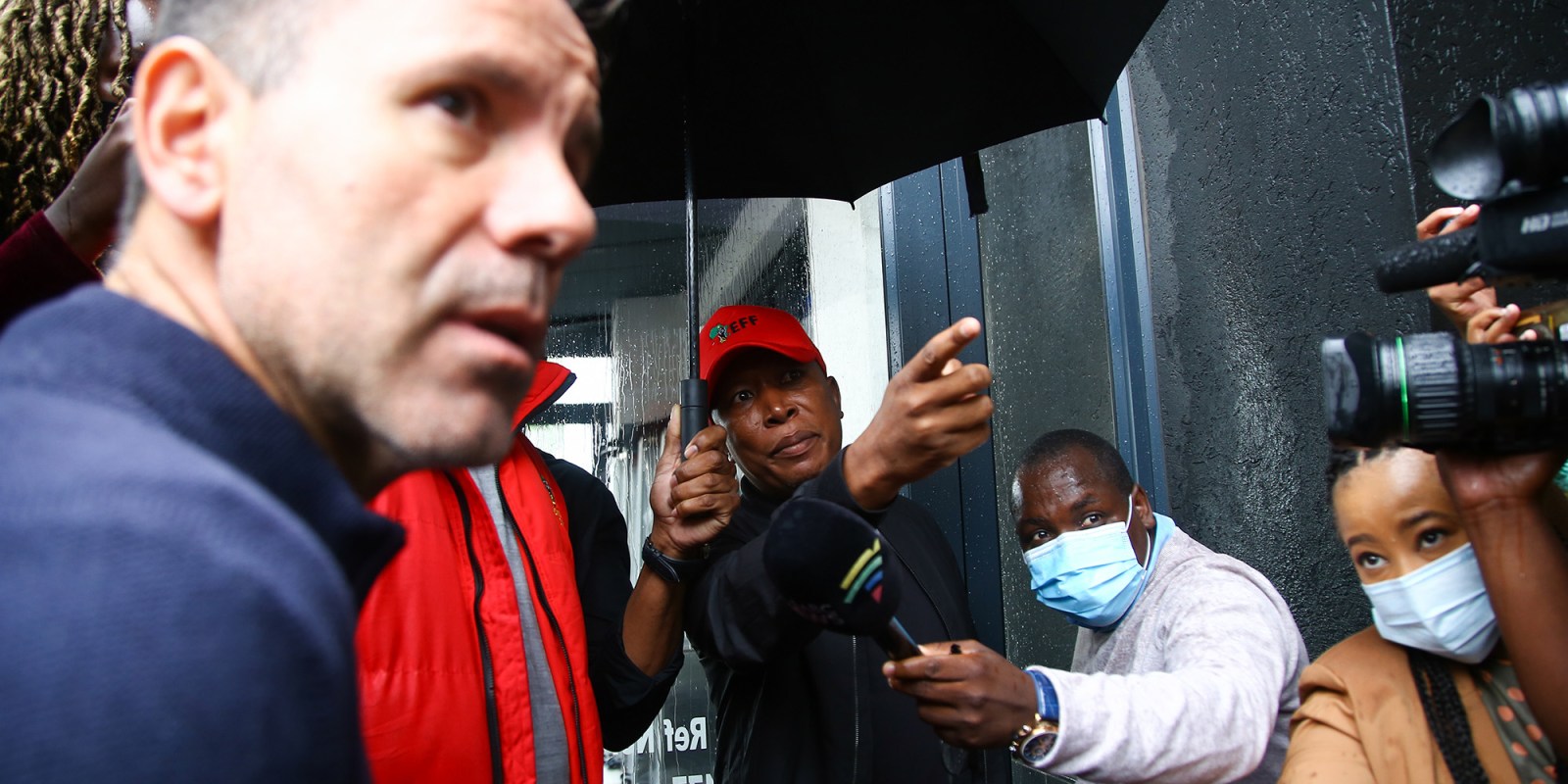 EFF leader Julius Malema the party's visit to restaurants at Mall of Africa on 19 January 2022 in Midrand, South Africa. The purpose of the visit was to check and assess the employment ratio of locals to foreign nationals. (Photo: Gallo Images / Luba Lesolle)

The flagrant disregard for the human rights of migrants, the rule of law and the Constitution is something that requires immediate intervention by law enforcement, the government and leaders in all sectors of society.

We, the undersigned organisations, are gravely concerned at the recent targeting of migrants in their homes and at their workplaces.

The calls made by several political parties and community activists to forcefully remove migrants from their homes, and to count the number of foreign nationals employed in South African restaurants, is profoundly disturbing. Actions such as these can easily escalate into the widespread xenophobic violence we saw in 2008 and in subsequent years.

This year marks seven years since Mozambican tuckshop owner Emmanuel Sithole was stabbed to death in Alexandra, pictures of which made our front pages. Yet it seems as though this recent past is lost in our collective memory, along with horrific scenes of Ernesto Alfabeto Nhamuave being set alight by a mob in Ekurhuleni. It must be remembered that in 2008, 62 people – 21 of whom were South African – were killed in the brutal xenophobic violence.

Despite this, we continue to see xenophobic sentiment actively being fuelled, with little to no sanction for those behind the inflammatory vitriol and the recurring attacks.

The flagrant disregard for the human rights of migrants, the rule of law and the Constitution is something that requires immediate intervention by law enforcement, the government and leaders in all sectors of society, including Chapter 9 institutions, and the South African Human Rights Commission.

We note the plight, particularly of young people, who queue tirelessly in meandering lines to submit CVs for job opportunities with no success. We are also mindful that the unemployment crisis has been made worse by the pandemic. Yet, the belief that migrants are “stealing jobs” intended for South Africans provides an easy “scapegoat” for the country’s problems.

This shallow view overlooks the systemic issues of corruption and capture that dismantled our economy. It ignores the ongoing failure of the state at all levels to provide hope and economic opportunity for the majority of South Africans.

It also overlooks the reports of corruption and the inefficiencies of the Home Affairs Department in processing migrant, asylum and refugee documents; and the role of the state in creating an environment that values human rights, integration and the dignity of people irrespective of where they are born.

Blaming migrants for our country’s woes is not the answer. We call on all political parties to desist from inflaming xenophobic tension. Similar to what we saw during July 2021, we are repulsed at how poverty, inequality and existing social tensions are weaponised to gain political clout. We call on communities to refuse to be party to accepting and spreading xenophobic sentiment.

We must ask what gives private citizens – including politicians under the guise of conducting oversight work – the right to search private property – be it homes or businesses – looking for migrants, conducting head counts, checking ID documents, or removing people and their belongings. These acts are somewhat reminiscent of the implementation of pass laws used during apartheid, where African workers were constantly harassed, intimidated, belittled, jailed and controlled through the hated “dompas”.

There is a slippery slope towards accepting and normalising vigilantism. What this means is that today, targeting migrants becomes “acceptable”, but tomorrow – when we are done with migrants – will it be a particular ethnic, tribal, racial, linguistic, religious, class or other group who we then blame and attack? The South African Police Service must uphold the law of democratic South Africa and act against those involved in vigilante activities.

The campaign supports calls made by the South African Council of Churches and other civil society groups for the government to intervene swiftly and prevent violence and possible death. We also support the call for a national dialogue on the issue, and place emphasis on the need for education and awareness campaigns that counter narratives that seek to dehumanise migrants. Our National Action Plan to Combat Racism, Racial Discrimination, Xenophobia and Related Intolerance cannot simply be sitting on a shelf and gathering dust – it must be implemented.

We note that anti-migrant sentiment is a global phenomenon, fuelled by populist right-wing racism and fascism. In recent years, we have seen children displaced from their parents crossing the US-Mexico border, the bodies of migrant children and parents washed up on the Aegean, and horrific scenes of people from various countries crossing the Mediterranean in rickety boats and in squalid conditions.

As we enter an era where the effects of climate change cause environmental devastation, and where heightened political instability persists in many countries, the issue of migration will require a new approach, one that should be guided by our common humanity and unflinching commitment to human rights. DM

If you wish to endorse this statement as an organisation, or in your personal capacity, please click on this link.

THIS STATEMENT IS ENDORSED BY: