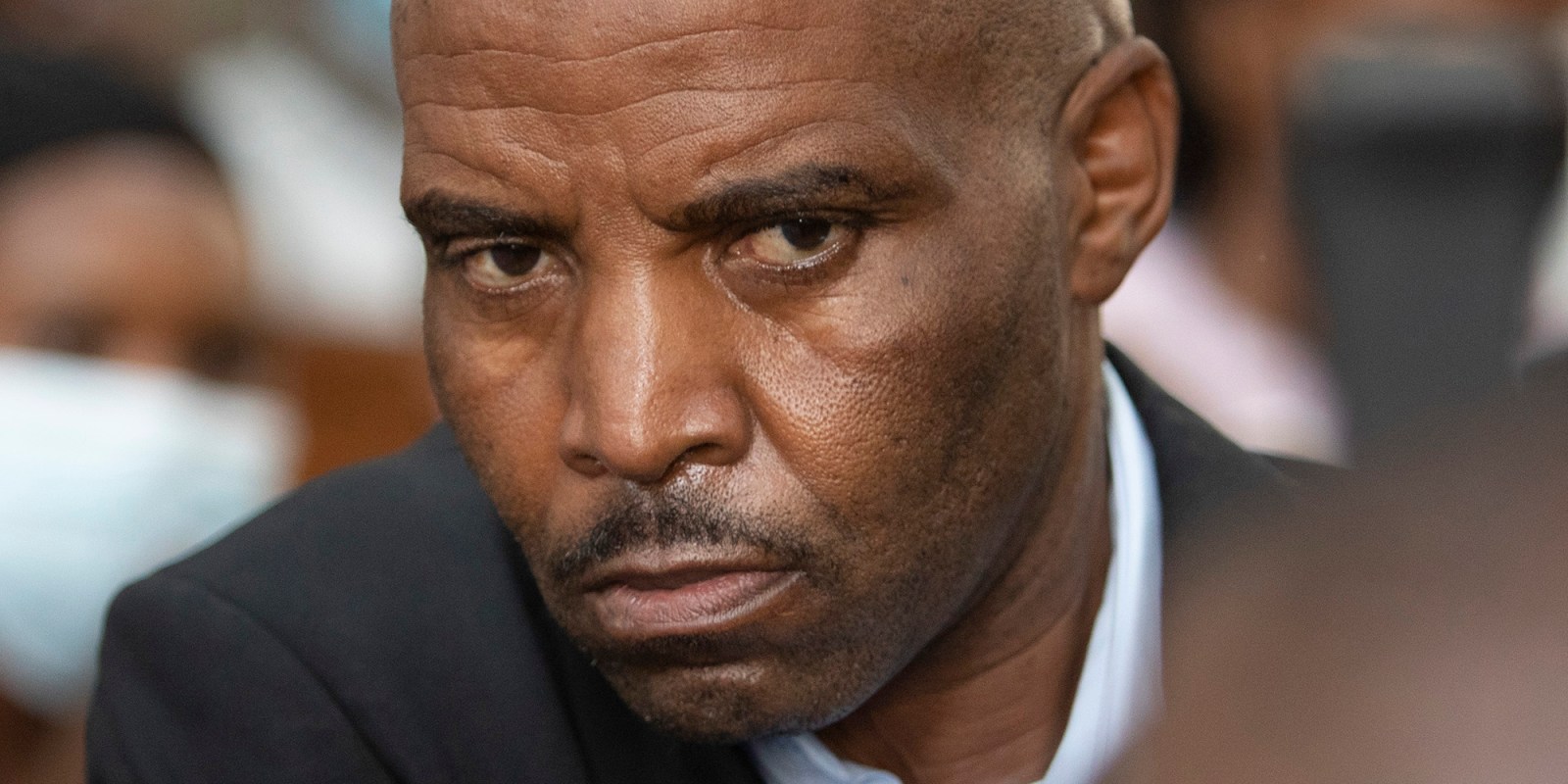 The last time the state was anxious to write off a man who had struck at the heart of government was 1966 when communist Dimitri Tsafendas stabbed Prime Minister Hendrik Frensch Verwoerd to death in the National Assembly.

On 2 January 2022, a fire, set at dawn, gutted part of that very same Old Assembly as well as the new National Assembly.

He was found sleeping on the streets of Cape Town and taken in by the Directorate for Priority Crime Investigation (the Hawks) for questioning after CCTV footage allegedly placed him at the scene of the crime.

Mafe appeared in court shortly afterwards, unshaven and visibly startled. Representing him pro bono was lawyer Luvuyo Godla (later to be joined by advocate Dali Mpofu, also pro bono) who maintained his client was a “scapegoat”.

Godla added that Mafe “rejected the charges” which, at that point, did not yet include “terrorism”.

Later, on 11 January, Mafe was charged with violating the Protection of Constitutional Democracy against Terrorist and Related Activities Act No 33 of 2004, which was added to five other charges, replacing a lesser charge of contravening the National Key Points Act.

It was at this hearing that magistrate Zamekile Mbalo ruled that Mafe be sent for psychiatric observation for 30 days after a district surgeon who had examined Mafe diagnosed him as a “paranoid schizophrenic”.

Tsafendas was neutralised by the same diagnosis by a district surgeon, an assessment that historian Harris Dousemetzis, in his 2018 biography of Tsafendas, “The Man Who Killed Apartheid: The Life of Dimitri Tsafendas”, has shown was used to cover up a serious security breach which led to Verwoerd’s assassination in full view of his colleagues and Parliament staff.

The author found that a Dr Ralph Kossew, Cape Town district surgeon at the time, had arrived at Caledon Square Police Station in Cape Town to examine Tsafendas shortly after the assassination and had found him of sound mind.

Tsafendas had answered all questions guardedly, did not appear to be confused and Kossew did not notice anything “wrong” with his mental state.

In 2022, the grinding of the wheels of justice for Zandile Mafe takes place against a bitter and explosive political backdrop of heated contestation of the rule of law and the Constitution within the governing party, the ANC.

The “attack” came two days before Deputy Chief Justice Raymond Zondo handed Part One of the State Capture report to President Cyril Ramaphosa on 4 January. The fire was set in Parliament on 2 January.

First and fearlessly out of the RET starting blocks was Minister of Tourism and ANC legacy fetish, Lindiwe Sisulu, who penned a vitriolic pamphlet attacking the Constitution and accusing the country’s judges of being colonised.

At least one prominent legal mind in South Africa, however, is regarded as beyond the reach of such spineless mental slavery: Western Cape Judge President John Hlophe.

A judge who has been found guilty by a judicial conduct tribunal of gross misconduct and who faces impeachment. This for attempting to improperly influence two Constitutional Court judges hearing a matter involving Jacob Zuma of Nkandla. He who sits in the heat in this current game of ANC thrones holding the country hostage.

Enter Mafe. The Mysterious Mr Mafe, who allegedly opted to target the physical symbol that represents our constitutional democracy: the National Assembly buildings.

On 3 January as the flames licked the night sky, Jacob Zuma’s daughter Duduzile, as well as EFF MP Mbuyiseni Ndlozi looked with bliss at the beautiful spectacle and tweeted up an RET storm.

Public Protector Busisiwe Mkhwebane, who also faces impeachment, looked up from reading Zuma’s just-published “autobiography” just long enough to call out (on social media), alongside the EFF, that it was time for Parliament to relocate to Tshwane.

On Wednesday in the Western Cape High Court Mafe’s legal team applied and succeeded in having Mbalo’s order, that the accused be sent for 30 days’ psychiatric observation, set aside.

Hlophe, handing down the ruling, said that the district surgeon’s assessment of Mafe’s state of mind had been flimsy and that she had brought no evidence of his apparent paranoid schizophrenia or of  “paranoid delusions”.

The doctor had hardly spent enough time to make such a diagnosis, opined Hlophe, making his own diagnosis in agreement with Mafe (who was not present at the hearing) that he was not insane and that “he knew what he was doing”.

This was after submissions by Mafe’s lawyers that their client was absolutely not insane.

What is peculiar about Hlophe’s comments is that he could have simply set aside the botched order without proclaiming that he believed the accused “for now”, without a shred of evidence to confirm this view. Mafe was not even in the court.

Hlophe attacked the lower courts for their treatment of Mafe, saying that he had not even been greeted when he had appeared and that Mbalo could have just asked a few questions of Mafe to determine whether or not he was of sound mind. Instead, he said, Mafe was bumped out of the bail queue. The entire process, he added, had been “grossly irregular”.

And so say all of us. We agree. We cannot have Mafe being subjected to unconstitutional procedures or being scapegoated.

Mafe is now being held in isolation in Pollsmoor Prison as he has tested positive for Covid-19.

On Wednesday there was agreement, including from the State, that the original order for Mafe’s hospitalisation had been irregular and should be set aside.

In this instance, unlike with Tsafendas, the state is not attempting to “hide” Mafe from public view.

Conspiracy theorists have been quick to suggest that the state may make some sort of attempt to make the Mafe matter “go away” and thus not “expose those behind it”. (The other faction in the ANC).

Prosecutor Mervyn Menigo, who skilfully negotiated the stiff political undercurrents at the proceedings, said the State would be opposing bail for Mafe.

His state of mind, added Menigo, would still have to be determined prior to the bail proceedings.

It would be a miscarriage of justice, Menigo said, if Mafe were unable to understand or follow the trial, this despite his legal team’s assurance that he was compos mentis.

In Tsafendas’ case the state would rather have had the good citizens of the country believe that Verwoerd’s killer was insane.

Apartheid security heavies at the time of Verwoerd’s assassination, led by the feared General Lang Hendrik van den Bergh, would have been left utterly humiliated by the political defeat of a communist penetrating a cordon of security and killing a prime minister in the very seat of government where apartheid laws were made.

Mafe, his state of mind and his alleged treason, could turn him into a RET hero or a martyr, the poor everyman rising up against the unjust state.

Or it could just reveal a poor man living on the streets of Cape Town with residual pyrotechnic expertise.

Whatever the truth of Zandile Mafe, it will begin to emerge at his bail hearing, as the State is bound to place in public what it knows.

This is not an illegitimate state.

It is the Constitution and the rule of law that will now protect and judge Mafe based on facts that will be placed in the public realm. DM