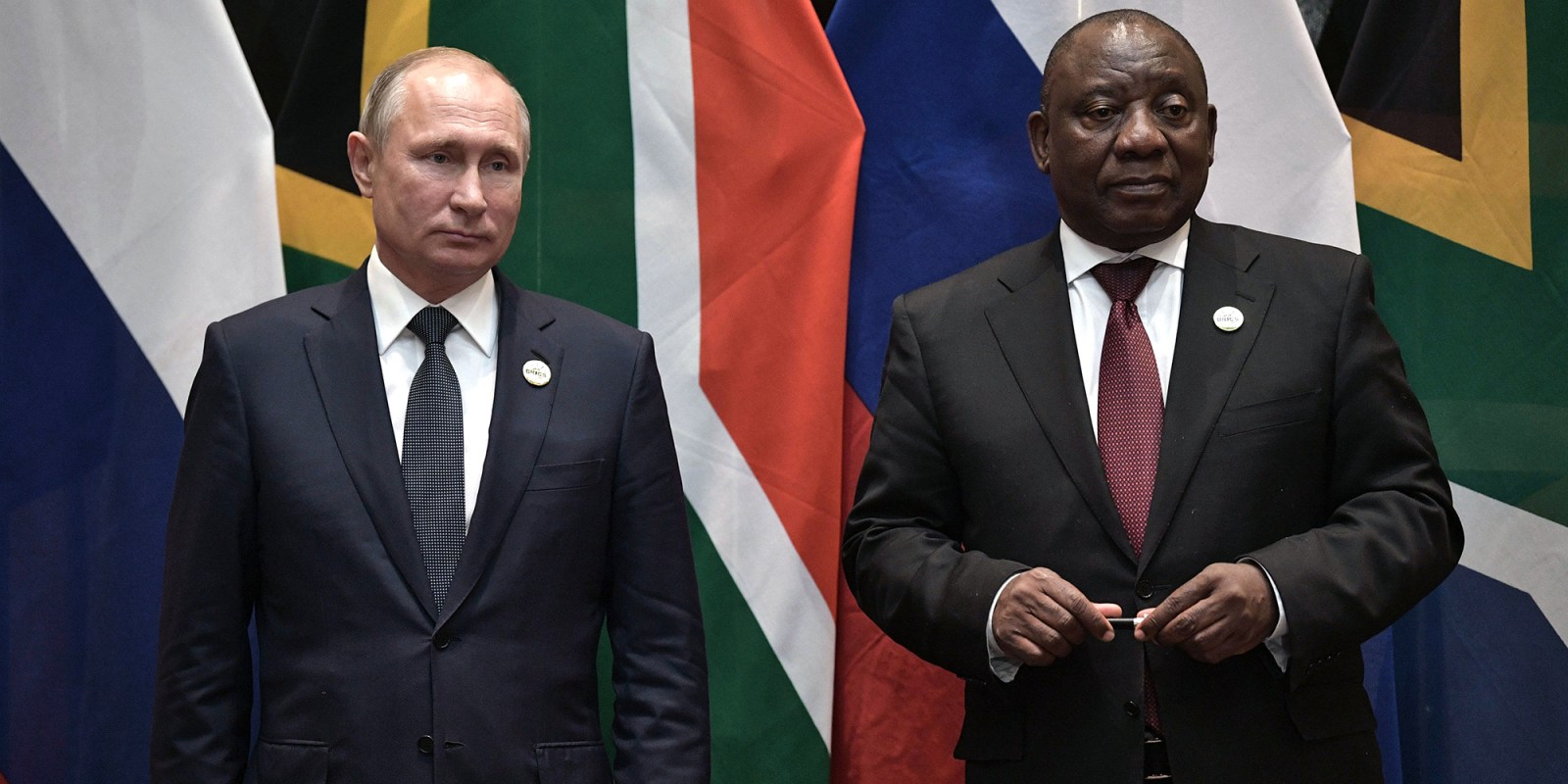 Ukraine’s ambassador is dismayed by Pretoria’s lack of response to fears about a Russian invasion. But the SA government seems to have made a decision to keep a watch on Ukraine because of its strategic position in relation to Russia.

Ukraine’s ambassador to South Africa, Liubov Abravitova is dismayed and disappointed that the government is not even prepared to talk to her country about its fears of an imminent invasion by Russia.

She told Daily Maverick that she had requested a meeting with officials from the Department of International Relations and Cooperation (Dirco) some time to urge it “really engage with Russia to deter the Kremlin from military action and aggression”.

But she didn’t get a reply, she said. “So it seems like the South Africa side is not really ready to talk about it.”

Ambassadors of other countries say they understand that South Africa is close to Russia – including through their joint membership of the BRICS bloc (comprising also Brazil, India and China) – so they have tried to engage with Dirco to ask South Africa to use its influence to dissuade Russia from an attack on Ukraine that many countries and foreign policy analysts believe may be imminent.

But they also say they have received no response to their requests.

“It is very critical for us today that we really see the international community really engage with Russia to deter the Kremlin from military action and aggression,” Abravitova said. Her aim was to provide information about what was really going on in Ukraine.

“The troops are concentrating and it looks – and is – very threatening.  We’re trying to get any reaction or support from the countries where we are accredited. And it is very unfortunate that the interest towards it is very low.

“We would encourage any engagement with the Russian authorities to convey the urgency of the situation from the South African side. “

She said the US and some European countries had also sent messages or démarches to Dirco, without getting feedback.

The European Union embassy in Pretoria had raised the issue of Ukraine in the joint ongoing political dialogue with South Africa, EU embassy spokesperson Frank Oberholzer said adding, “We have kept our counterparts at Dirco informed of the situation and EU position”.

Abravitova said she believed that Ukraine, as the biggest country (by area) in geographic Europe deserved more attention from South Africa, such an important country which had to be a leader in Africa. Ukraine especially expected more attention from Pretoria this year when the two countries were marking 30 years of diplomatic relations.

She said she understood that South Africa tried to maintain a neutral posture in international relations. “But in order to stay neutral, I strongly believe, you have to be aware of the situation and gather information from both sides. So the communication must be from both the Russian and the Ukrainian side.

“To take a clear view, because now there are open aggressive moves against Ukraine.”

Neutrality would become impossible if Russia invaded Ukraine, she suggested, as everyone at that point would only be able to take sides.

Abravitova suggested that South Africa should be doing what some European countries were doing: sending diplomats, experts, analysts and journalists to Ukraine to examine the situation for themselves. One thing they would see was the “passportisation” of eastern Ukraine where Russia was issuing passports to Ukrainians. “And then in a couple of months they will say these are the Russian people and they will come to defend their citizens.” She said this had happened in other places close to Russia such as Georgia and Transnistria.

She expressed disappointment that there was little interest in Ukraine’s plight in South Africa, not only from the government but more widely, for instance, in the media. “Even though we have a very strong violation of international law and annexation of Crimea. I know the problem of African countries where the rest of the world doesn’t recognise their problems but now it’s the other way round where Africa doesn’t really care about some other regions.”

Asked if South Africa was trying to use its influence with Russia to dissuade it from invasion, or whether it should at least say something, Dirco spokesperson Clayson Monyela said, “We are monitoring and following developments closely. But South Africa is always careful to avoid speculation or preempting actions of others.

“It’s a practice that is frowned upon in diplomacy as it could potentially be costly if what you’re prematurely reacting to doesn’t materialise.

“As a matter of principle, South Africa believes in and advocates for a peaceful resolution of any  political challenge/conflict globally, anchored on respect of the territorial integrity and sovereignty of nations.”

Elizabeth Sidiropoulos, national director of the South African Institute of International Affairs said, “I don’t think SA will have much influence in the debate between Nato and Russia on Ukraine.

“But that doesn’t mean we shouldn’t make a statement, focusing on the fact that it could be dangerous to keep upping the ante as this is the way crises get out of control.

“Russia sees this as existential to its security to have Nato on its border. But Nato, quite rightly, says that each country should have the right to decide what and who it wants to join.

“Having said that though, the big powers do need to reflect on how far they are willing to push their respective positions. Has either the US or Nato provided any openings on some of the issues Russians are raising? And vice versa?

“We should be focusing our statement on defusing the situation. And emphasising the role of diplomacy, even if that requires patience.”

Arina Muresan, a researcher at the Institute for Global Dialogue said, “It’s not in South Africa’s best interest to say anything at the moment. It’s not in their interests to get involved in Eastern European issues, because SA has dedicated resources to other issues,” she said.

This was in part because Dirco was already under-resourced, she added, stressing that she was offering her own opinion. But Muresan noted that despite the fact that South Africa had less trade with Ukraine than with its neighbours Romania and Belarus, it had recently closed its embassies in the last two countries, but had kept open the embassy in Ukraine.

This indicated that Pretoria had made a decision to keep a watch on Ukraine because of its strategic position in relation to Russia.

One Western diplomat said it came as no surprise that South Africa was not interested in getting involved in the standoff between Russia and Ukraine – and the US and Nato – because it never really involved itself in conflicts that were not between the North and the South, or which involved decolonisation or Africa.

Likewise, Western countries would be disappointed but not surprised if South Africa said nothing if Russia invaded Ukraine. “There will be disappointment and then we’ll move on and in a few years we will have forgotten about it. It won’t disrupt our relations.” DM