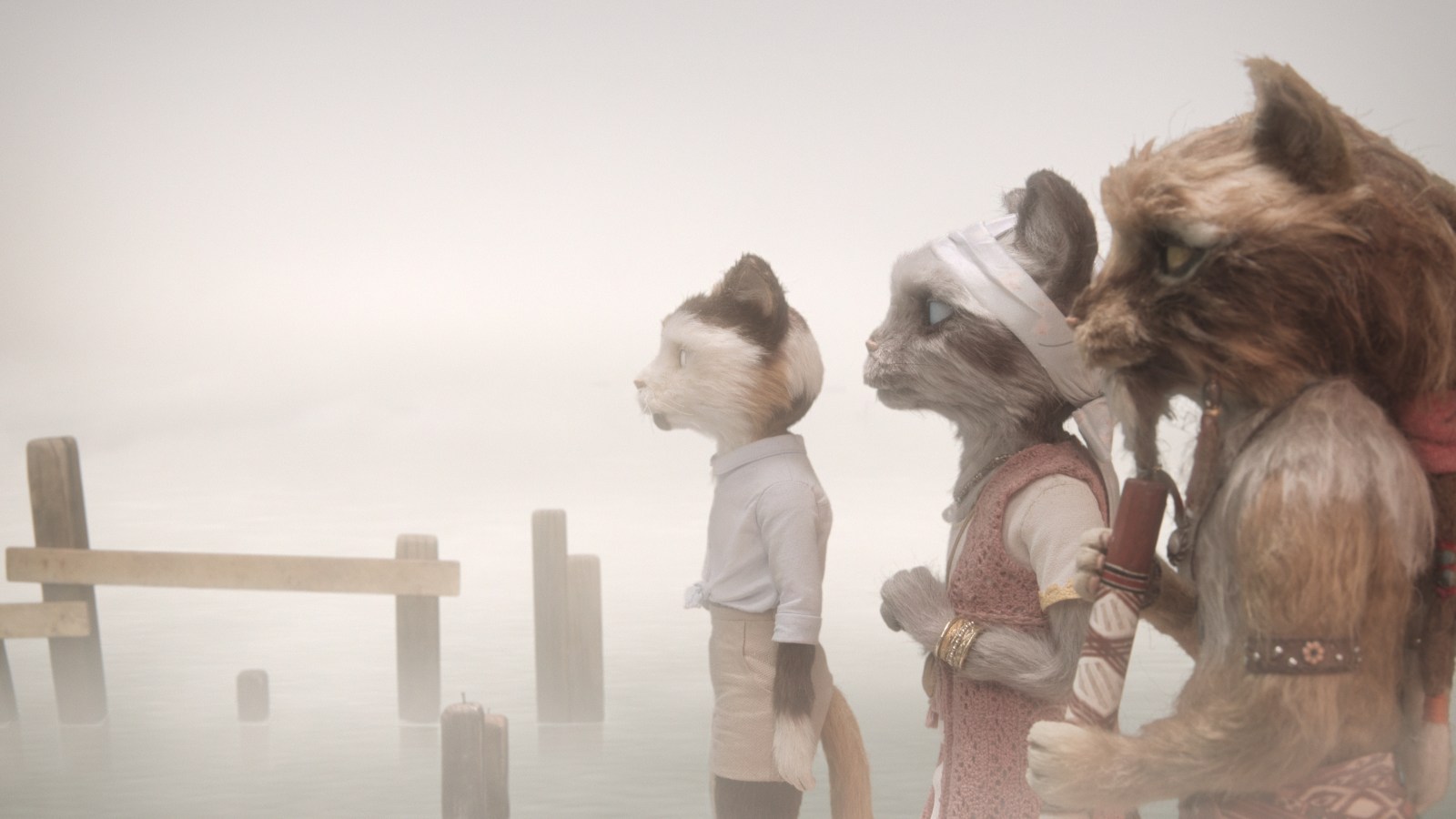 (L to R) Susan Wokoma as Rosa, Helena Bonham Carter as Jen, Paul Kaye as Cosmos in "The House". Image: Courtesy of Netflix © 2021

‘The House,’ now streaming on Netflix, is a creepy, intricately animated anthology with three surreal half-hour fable-like stories of the same building across periods of time.

Written by Irish playwright Enda Walsh, each chapter of The House is directed by different filmmakers in varying styles of stop-motion animation. Overall, it’s a pretty freaky piece of work, to be watched by viewers who will appreciate the craftsmanship of its animators and its elusive symbolism and social commentary.

The film opens with a 2D black-and-white animation of the house moving and morphing like a living creature. There is a mysterious potency about the structure – in each tale, it represents hope for the protagonists and cautions some moral involving material attachment and decay.

A note of caution: Absolutely do not watch the first two chapters of The House with children.

The stories get lighter, and the third one would be appropriate for kids (although much of its symbolism might be inaccessible), but the first chapter in particular (by far the most memorable and peculiar) is almost guaranteed to frighten sensitive or younger viewers.

And heard within, a lie is spun is a suspense horror animated by Emma De Swaef and Marc James Roels, whose distinct gothic-felt style is terrifying enough regardless of what it’s used for.

Set in the early 1900s, Mabel is a young British girl who has recently moved to a cottage in the countryside with her parents and baby sister. Her father’s pompous aristocratic relatives come to visit and humiliate him, and he is ashamed by his modest home, so when a renowned architect offers to build them a mansion on top of the hill, free of charge, he agrees without hesitation.

Mabel’s parents become almost entranced by their new luxury, oblivious to the dark portents around every corner. This chapter is a stylised retelling of the trope of “a bargain struck”, whether it’s with the devil, a demon, or something even more viscerally disquieting.

Other fable tropes skulk about in the shadows as well – the overlooked child alone in her recognition of danger, and the haunted house that swallows those lured in by its beauty. The menacing tale is reminiscent of The Brothers Grimm, and cautions a familiar lesson about greed, and that nothing in this life is free.

The characters are unnerving with their plump, pale faces, tiny, beady eyes and jittery puppeteered movements. And of course, their crawling fabric skin. De Swaef and Roels’s visual style evokes the discomfort of the grotesque, but not as a means to indicate wickedness – Mabel and her baby sister are just as malformed as the antagonists.

In animation, attractiveness and ugliness are often used as an indicator of good and evil, a simple (objectionable) visual cue that equates appearance to value. Just as the ornate mansion is misleading in its grandeur, De Swaef and Roels implore the audience to look deeper than the surface to derive goodness.

Although the characters are not cute, at any moment, particularly in wider shots, pause to take in the delicate sets of fabric objects. If you become comfortable with the furry aesthetic, you can appreciate the creativity and versatility of the material, like the way that the fiery red wool comes to life in the house’s hearth and the dramatic lighting that can only be achieved with real sets, as opposed to CGI.

Then lost is truth that can’t be won takes place in a modernised world, but one populated by anthropomorphised rats. The main character is a property developer (voiced by Jarvis Cocker) who’s invested years into refurbishing the house to sell.

Yet again, the house represents excess, and is intended for the sort of rats who say things like “Chamonix has become terribly plebeian now”. Just when the house is looking modern and complete, a day before the viewing, the developer is revolted to discover an infestation of fur beetles that he cannot get rid of. The viewing goes terribly but two strange, wealthy rats insidiously insist that they are “extremely interested in the house” and refuse to leave.

This chapter is pretty icky, but it’s playful, with a dry and dynamic humour a bit like Roald Dahl’s Revolting Rhymes. The entire thing is a parable of the financial elite being parasites who live off others. It’s ironic that the rats are so disgusted by the “vermin” bugs, but the comparison goes deeper.

Listen again and seek the sun is the most charming of the three despite being set in a post-apocalyptic flooded world. A landlord cat named Rosa is trying to refurbish the house yet again, which now sits precariously in the mist, just above expansive waters.

Rosa’s two oddball tenants, voiced by Helena Bonham Carter and Will Sharpe, never pay their rent, so Rosa is battling to keep the house together. With the water still steadily rising, it becomes clear that her obsession with the house is not just about wanting to carve out a comfortable future for herself, but also clinging to a past that has already set sail.

This chapter deals with material attachment, but it also approaches materialism from the opposite angle as the other two, and with more empathy. It comments on an extreme position of antimaterialism, an ideological standpoint requiring privilege and relying on the kindness of others. This chapter is less memorable than the first two, and its message is ethereal. It ends the anthology on a cheerful, contemplative note.

Even though the stories are so tonally distinct, they are thematically linked, and frequently reference one another. In the first scene of chapter 1, Mabel plays with toy rats; chapter 2 opens with Mabel’s mother’s sewing machine in the garbage outside the house; and at the beginning of chapter 3, a fur beetle scurries along the underside of a floorboard.

It is intriguing that the chapters become less dark and grotesque as they become less human, and as time goes on. This trend may reflect Walsh’s misanthropy, but it may also be interpreted as vaguely optimistic about the potential of the future.

If one were to condense the messages of each chapter into a single narrative it might be something like this: our parents made a deal with the devil that has left us riddled with corrupt, parasitic elite, but even while their greed brings the planet to ruin, there is still hope for a better future if we can let go of the systems of value on which their reign was built. DM/ML

The House is available in South Africa on Netflix.