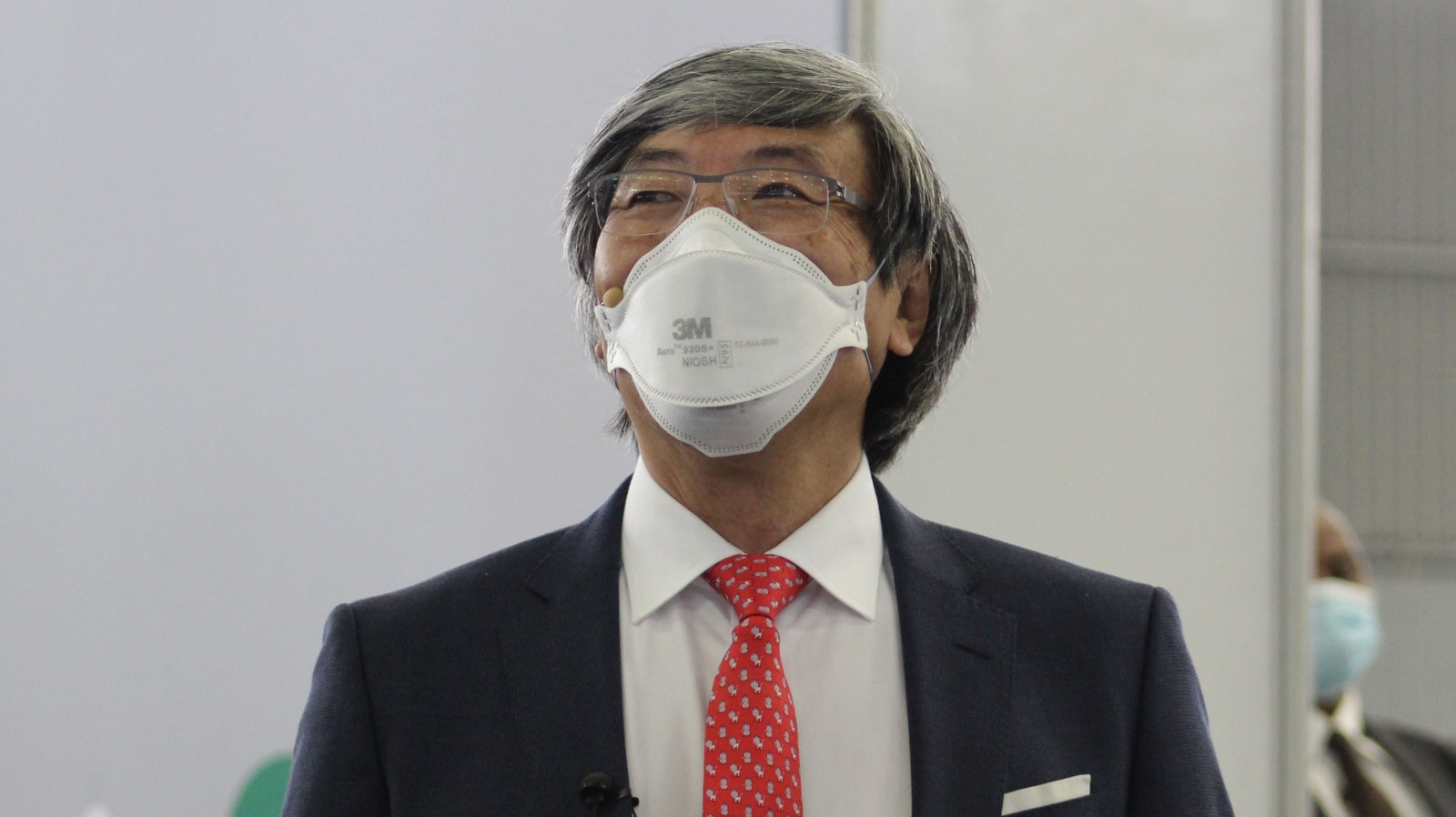 Dr Patrick Soon-Shiong addresses representatives of government, academia and the biotech industry at the launch of the NantSA vaccine manufacturing campus at Brackengate on 19 January 2022. (Photo: Tamsin Metelerkamp)

The launch of the Nant South Africa vaccine manufacturing campus on Wednesday marks the inception of the first facility on the African continent where vaccines will be produced from scratch.

The long-standing inequities in vaccine development and access have been thrown into sharp relief by the course of the Covid-19 pandemic. Now more than ever, South Africa supports vaccine manufacturing in Africa to ensure that the continent becomes self-sufficient and sheds “those colonial chains” that have previously bound it.

These were the words of President Cyril Ramaphosa as he stood beneath the harsh lights of a vast and yet-to-be outfitted facility at the launch of the Nant South Africa vaccine manufacturing campus in Brackengate, Cape Town, on Wednesday.

“Africa should no longer be the last in line to access vaccines against pandemics. Africa should no longer go, hat in hand, to the Western world, begging and begging for vaccines that they just want to drip off from their tables,” said Ramaphosa. “We will stand on our own. This we are determined to do and this facility is proof of that.”

Nant South Africa, along with NantAfrica and Nant Botswana, was established in 2021 to participate in a coalition of organisations for the advancement of health in Africa. Their founder, the billionaire scientist and NantWorks CEO Dr Patrick Soon-Shiong, described the launch of the vaccine facility as one of the most momentous moments of his life and a “homecoming”. Soon-Shiong was born in Port Elizabeth, and trained in South Africa before emigrating to the US.

“I have the privilege of being trained as a doctor, obtaining amazing opportunities in the United States, and the idea is to bring it home so that we can create self-reliance in our country,” said Soon-Shiong.

Other speakers at the launch included Dr Corey Casper, the CEO of the Infectious Disease Research Institute; Dr Glenda Gray, the president and CEO of the South African Medical Research Council; and Blade Nzimande, the Minister of Higher Education, Science and Technology. Virtual addresses were given by Dr Matshidiso Moeti, the Africa regional director of the World Health Organization; and Dr John Nkengasong, the director of the Africa Centres for Disease Control and Prevention.

The event also marked the launch of the Africa’s Access to Advanced Healthcare Coalition. The coalition is a collaboration between biotechnology and pharmaceutical companies, government agencies, non-profit organisations and academia to enable domestic production of pharmaceuticals, biologics and vaccines in South Africa, according to the coalition’s information booklet.

“I think the guiding principle [of Africa’s Access to Advanced Healthcare Coalition] is, from compassion and collaboration comes change. So, I want to share with you today not aspirations, but actual action,” said Soon-Shiong.

One of Africa’s Access to Advanced Healthcare Coalition’s aims is to see the new Nant South Africa facility produce a billion doses of Covid-19 vaccines by 2025, with Soon-Shiong expressing his hope that the first doses will be completed within a year.

“So that’s why we’re moving at lightning speed. The architectural design has already been completed,” he said, adding that the development of the facility will cost at least R3-billion as “the ambition is large”.

Soon-Shiong estimated that between 400 and 600 South Africans would be employed at the facility to ensure the manufacturing of a billion vaccine doses, from drug substance to finished product​​. The Nant South Africa campus will be the first facility on the African continent to produce vaccines from scratch, as opposed to other facilities where the drug substance is manufactured elsewhere and brought to the region for “fill and finish”, said Ramaphosa.

“Our responsibilities here are to build core capabilities. Core capabilities is not eventual packaging and saying, ‘We’re going to send you product’. [With] core capabilities, you’re actually building the drug from scratch, from the ground up,” said Soon-Shiong.

The goal in South Africa is to cover the entire vaccine production value chain by upgrading existing capacity and bringing new capacity on board, emphasised Ramaphosa.

“Emerging African manufacturers need technology partners to develop their skills and to assist the technology transfer that is so necessary in this technology-driven industry,” he said.

Global health organisations have indicated that Covid-19 will more than likely not be the last global health threat, said Nzimande. As such, he said, the South African government believes that it is important to better prepare for a future marked by new kinds of zoonotic and climate-driven health threats.

“This requires massive public and private investment in a whole range of predictive diagnostic surveillance that is equipped in health management capabilities. In addition to averting the next public health disaster, such initiatives will also make it possible to address neglected diseases that have plagued Africa for centuries, such as, for example, malaria and tuberculosis,” said Nzimande.

The focus of Africa’s Access to Advanced Healthcare Coalition is on the production of “second-generation” vaccines, not only for Covid-19, but for other diseases that plague the African continent, according to Soon-Shiong.

“We have now developed this S+N T-cell vaccine as a second-generation [Covid-19] vaccine, and we want to manufacture this in Africa for Africa, and export it to the world,” he said.

Work is currently ongoing to have the new vaccine approved under Food and Drug Administration and European Union standards, said Soon-Shiong.

“We’re doing the same trials in the United States. We’re also about to launch trials in Australia, trials in Botswana, and a trial here in South Africa,” he added.

“I’m working very closely with Sahpra [the South African Health Products Regulatory Authority], and it’s important not only for Sahpra to approve it, but for us to get it at a standard level so that it could be exported… because our goal is to build a sustainable industry, not a product.”

The development of a robust biotechnology and life sciences industry in South Africa not only requires the cooperation of scientists, but that of technicians and those holding bachelor’s and master’s degrees, as well as PhDs, said Soon-Shiong.

As such, the Chan Soon-Shiong Family Foundation has committed R100-million to “educate and create a skilled workforce to work anywhere in the country”, he said. Together with Gray and the Medical Research Council of South Africa, as well as the universities of Cape Town, Witwatersrand, Johannesburg and Port Elizabeth, the foundation aims to create a “solid programme”.

“We have worked closely with Patrick [Soon-Shiong] and continue to work closely with him to validate his Covid-19 vaccines, and we remain completely committed to this endeavour,” said Gray.

Many young Africans will benefit from the R100-million endowment that the foundation has committed to the training of a skilled workforce in the biotechnology and life sciences fields, said Ramaphosa.