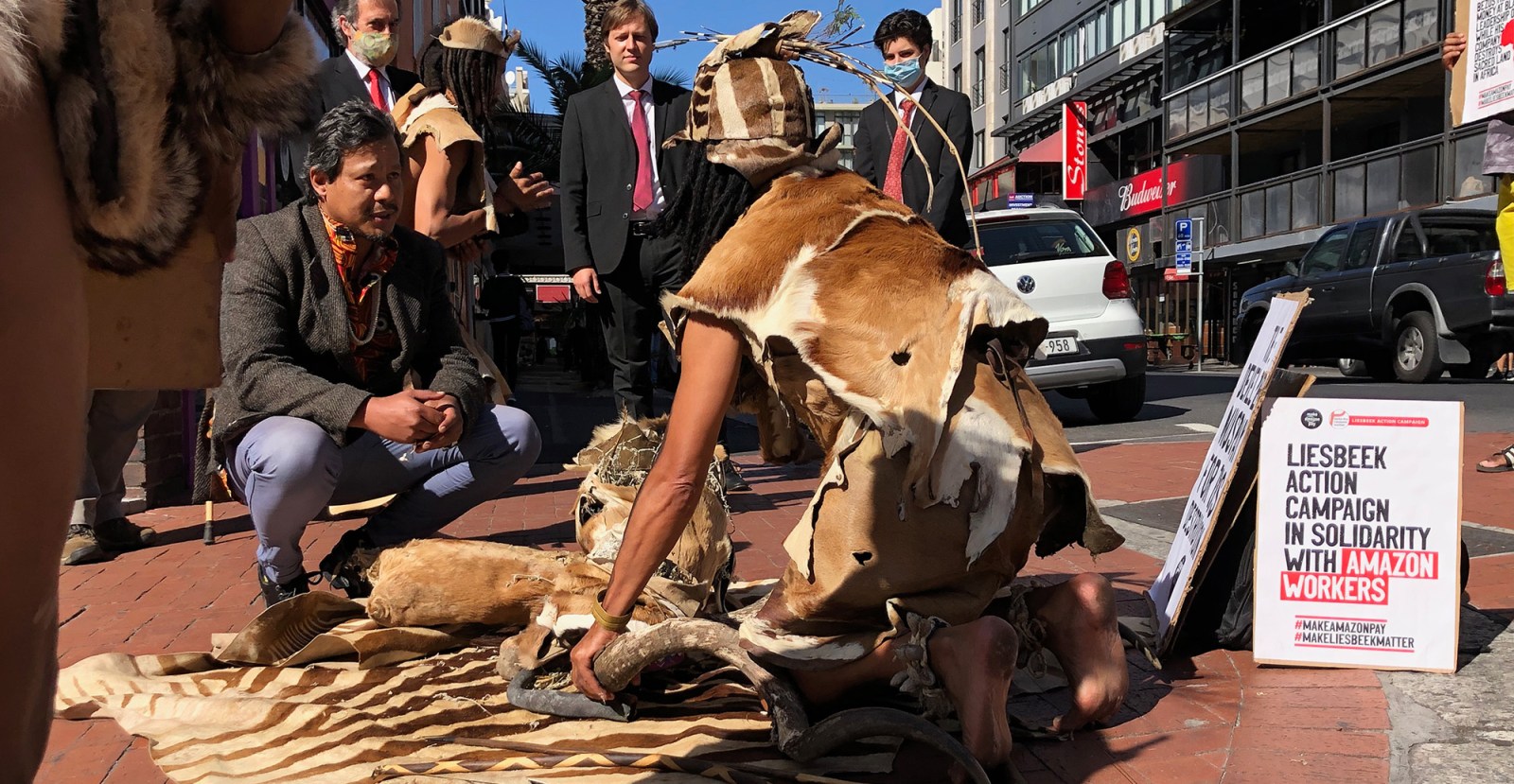 Members of the Goringhaicona Khoi Khoin Indigenous community perform a cleansing ceremony and prayer before walking to the Western Cape High Court for a three-day hearing that seeks to put a halt to construction on the Liesbeek Leisure Property Trust development that will house Amazon’s African headquarters. (Photo: Onke Ngcuka)

‘Our heritage is not for sale,’ say Khoisan members as they legally oppose the development of what will house Amazon’s Africa operations headquarters.

‘Divide and conquer” was the slogan associated with colonialism. Post colonialism, the slogan remains true among the Khoisan where two groups of the indigenous community were on opposing sides of a court hearing seeking to interdict the ongoing development in Cape Town by the Liesbeek Leisure Property (LLP) Trust where global retail giant Amazon will house its Africa operations headquarters.

The application for the interdict was brought at the Cape Town High Court by Cullinan and Associates, representing the Goringhaicona Khoi Khoin Indigenous Traditional Council (GKKITC) and the Observatory Civic Association. A separate group of Khoisan people, the First Nations Collective (FNC), supports the development that will house Amazon.

One reason for their support is the “world-class facilities where the First Nations will be empowered”. These facilities include an indigenous garden to grow traditional medicinal plants, an amphitheatre where the group can perform traditional song and dance, and a cultural media centre.

The GKKITC argued that the consultation process for the development which saw the FNC consulted in the lead-up to the development’s approval and the GKKITC excluding themselves, didn’t mean that they did not want to be part of the process.

They argued that under international law, corporations should consult indigenous communities under their own terms and conditions and not those of the corporation.

“We argue that the consultation process was flawed from the beginning, and the fact that the GKKITC did not participate in that specific consultation did not mean that they waived their right to any consultation,” Hercules Wessels, senior associate at Cullinan and Associates, one of the attorneys representing the GKKITC, told Daily Maverick. He added that a separate consultation was added to the current development’s assessment and tailored to fit the development’s needs.

Before entering the high court, the GKKITC performed a prayer ceremony, burning imphepho and chanting. A group of FNC members demonstrated opposite the group, and some members of the GKKITC shouted “sell-out” at them.

In this instance, the confluence of the Black and Liesbeek rivers in Cape Town where the LLP is constructing the development is a space of great cultural importance for the Khoisan community, but also of national significance, making it both a tangible and intangible resource.

The area is regarded as sacred, stemming from the 1510 battle between the Gorinhaiqua Khoi who killed the Portuguese Viceroy Francisco de Almeida at the Battle of Gorinaiqua in response to a Portuguese cattle raid.

The floodplain also marks the area where the first Khoi-Dutch War (1659-1660) over traditional grazing land access was sparked. The area has been identified as part of the Khoisan Legacy Project and the National Liberation Heritage Route.

The GKKITC’s legal team argued the cultural heritage and significance before Western Cape Deputy Judge President Patricia Goliath. In addition to cultural significance, the attorneys also highlighted to the court irregularities in the environmental assessments carried out by the City of Cape Town.

Wessels said the development is harming the intangible heritage associated with the indigenous community.

“The provincial minister’s decision-making in terms of giving the developer an environmental authorisation did not comply with the law because the impact assessment of the intangible heritage associated with the site… did not comply with the assessment of Heritage Western Cape. And that’s a clear requirement that the provincial minister had to comply with, which it did not. So that renders the environmental authorisation reviewable,” Wessels said.

Species including the African clawed frog, Cape galaxias (an indigenous fish) and several species of birds and insects live in and along the river.

“We considered today’s proceedings very historical because it is the first time that the San and the Khoi are in the high court pushing for the recognition of heritage that is under threat by egregious and inappropriate development; in this case, the largest company on Earth [Amazon],” Tauriq Jenkins, high commissioner of the GKKITC, said.

Currently, the development is about two stories high. “These to us are egregious crimes and so it’s important for us to be here today so that we can stop this as soon as possible,” Jenkins said.

The proceedings will continue until Friday at the Cape Town High Court, and the GKKITC plans to hold demonstrations at St George’s Cathedral and outside the high court. DM/OBP