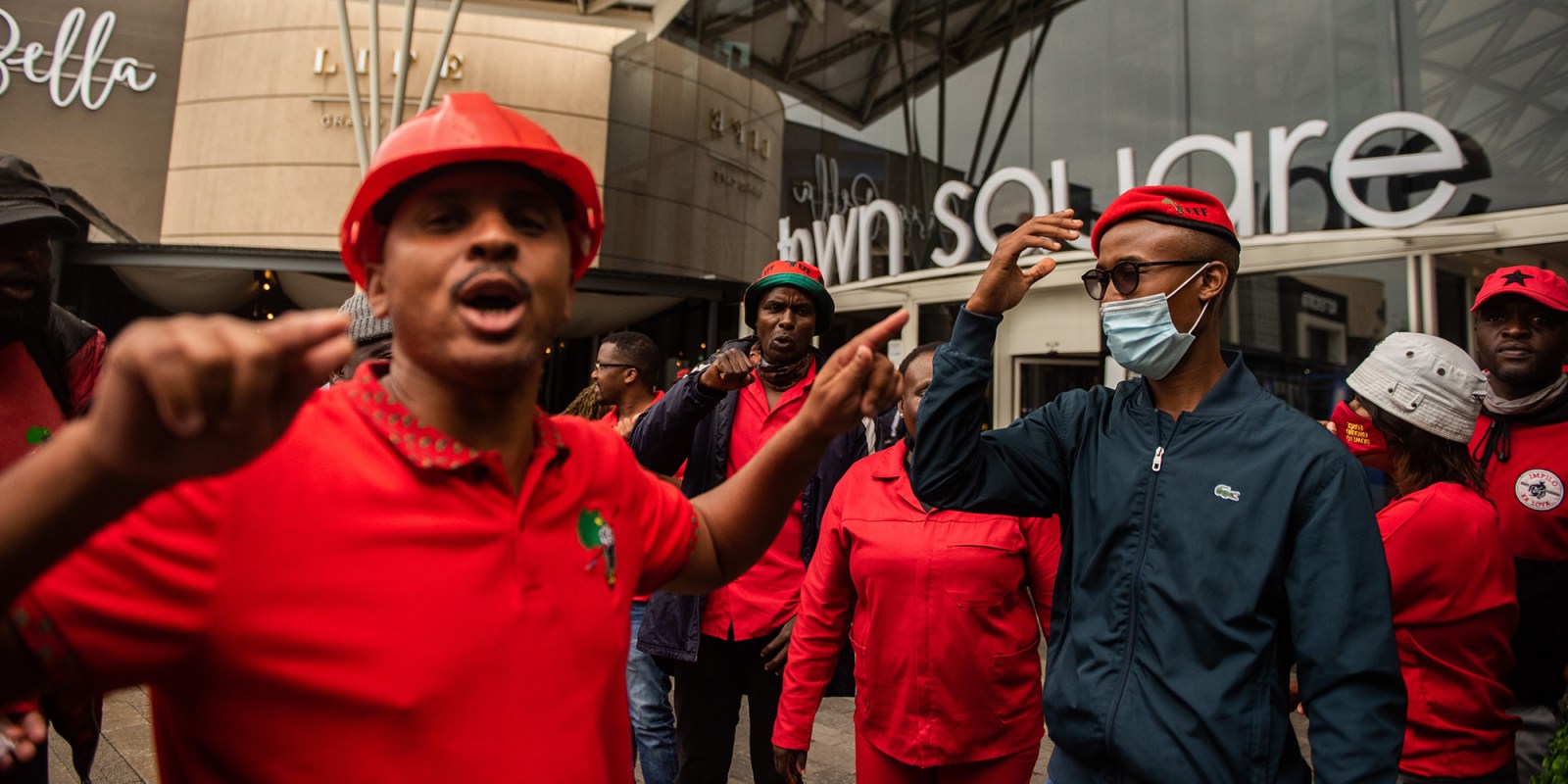 Members of Economic Freedom Fighters (EFF) visit restaurants at Mall of Africa on January 19, 2022 in Midrand, South Africa. The purpose of the visit was to check and assess the employment ratio of locals and foreign nationals. (Photo: Gallo Images/Alet Pretorius)

The party’s workplace forums and leaders now regularly encroach on shop floors often causing violence and destruction. The police do nothing.

EFF party leader Julius Malema and his henchmen say they were on a parliamentary oversight visit to inspect Johannesburg and Pretoria restaurants to check ratios of foreign to local staff.

But videos show that party foot-soldiers threatened staff, and forcibly shut down one restaurant by locking it with chains themselves. At another, a local leader said he was giving the restaurant manager two weeks to reach a staff ratio set by the EFF.

Three judgments have condemned the EFF’s actions as a quasi-trade union interfering in workplaces but the party has ignored them as it continues to use bullying tactics, often on small businesses.

In 2020, Calgan Lounge’s, a medium-sized furniture manufacturer won a Labour Court case that found the EFF had no standing at the company and said the party had helped organise an illegal strike. A high court and a labour court judgment in June 2021 ordered the EFF not to interfere in the workplace affairs of Africa-Services in Vereeniging and at the Gordon Road Spar in Johannesburg.

EFF members looted and vandalised H&M stores. In December 2018, EFF members trashed Vodacom outlets after the party objected to a speech at the Vodacom journalism awards by Mavuso Msimang. In September 2020, 37 Clicks stores were vandalised by EFF members after the party chairperson Veronica Mente called ‘Attack’ on social media. After that, 400 stores shut down in fear.

H&M did not pursue charges. Vodacom senior executives including CEO Shameel Joosub went to EFF headquarters to apologise. Clicks interdicted the EFF but did not pursue charges. The three judgments were won for two medium-sized companies and a Spar franchise.  The actions of the big retailers have left the flanks of small and medium-sized businesses exposed and the EFF workplace forums conduct small-time reigns of terror on them. The restaurant inspections only received national attention because the party announced it to the media multiple times, but the pattern is regular.

A long trail of violence

Attacks on the media have escalated from cyber to physical violence. In March 2021 and September 2020, eNCA reporters were manhandled on live television by EFF members. Numerous journalists as well as the SA National Editors Forum have taken the party to court. Professor Anton Harber and former SABC economics editor Thandeka Gqubule won their case against Ndlozi who had labelled them as Stratcom, the apartheid-era black-ops propaganda wing. The late journalist Karima Brown also won her case against the EFF when Malema put her mobile number on Twitter. She brought it in terms of electoral code of conduct rules which heighten public and political responsibility for democratic and peaceful speech.

While various criminal charges have been laid against EFF MPs, not one has been fully investigated or prosecuted.

Malema’s actions are often green-lit by institutions with a mandate to protect against violence. In March 2019, the Human Rights Commission found his statement saying the party was not calling for the slaughter of white people “at least for now” was legitimate free speech. On January 19 after Malema and other EFF members inspected restaurant staff profiles, the parliamentary spokesperson Moloto Mothapo tweeted that while he was not responding to the EFF issue directly, MPs could do inspections as part of their oversight work and to feed into parliamentary investigations. The party’s shock troops immediately seized on his tweets to legitimise the restaurant migrant worker smoke-outs even though he also emphasised there are rules governing MP’s actions.

The restaurant visits are part of a growing political push against African migrants. The campaign is not limited to the EFF, the Patriotic Alliance and Action SA but is being taken up by the government too.

In December, a Cabinet plan to cancel 200,000 Zimbabwean special permits, granted to asylum-seekers as repression grew under the last days of the late liberation leader Robert Mugabe, was narrowly averted. Home Affairs minister Aaron Motsoaledi had already alerted banks to the permit cancellation plans initially pencilled in for December 2021. The permit-holders have been given a respite to the end of 2022.

While his department is responsible for a specific set of labour inspections, Labour and Employment Minister Thulas Nxesi issued a mild statement against the EFF’s restaurant visits. The statement emphasised that the government is finalising regulations to restrict the employment of foreign workers in South Africa. DM