DOWN IN THE DUMPS

A linchpin of SA’s recycling economy, informal waste pickers should be integrated into the mainstream economy 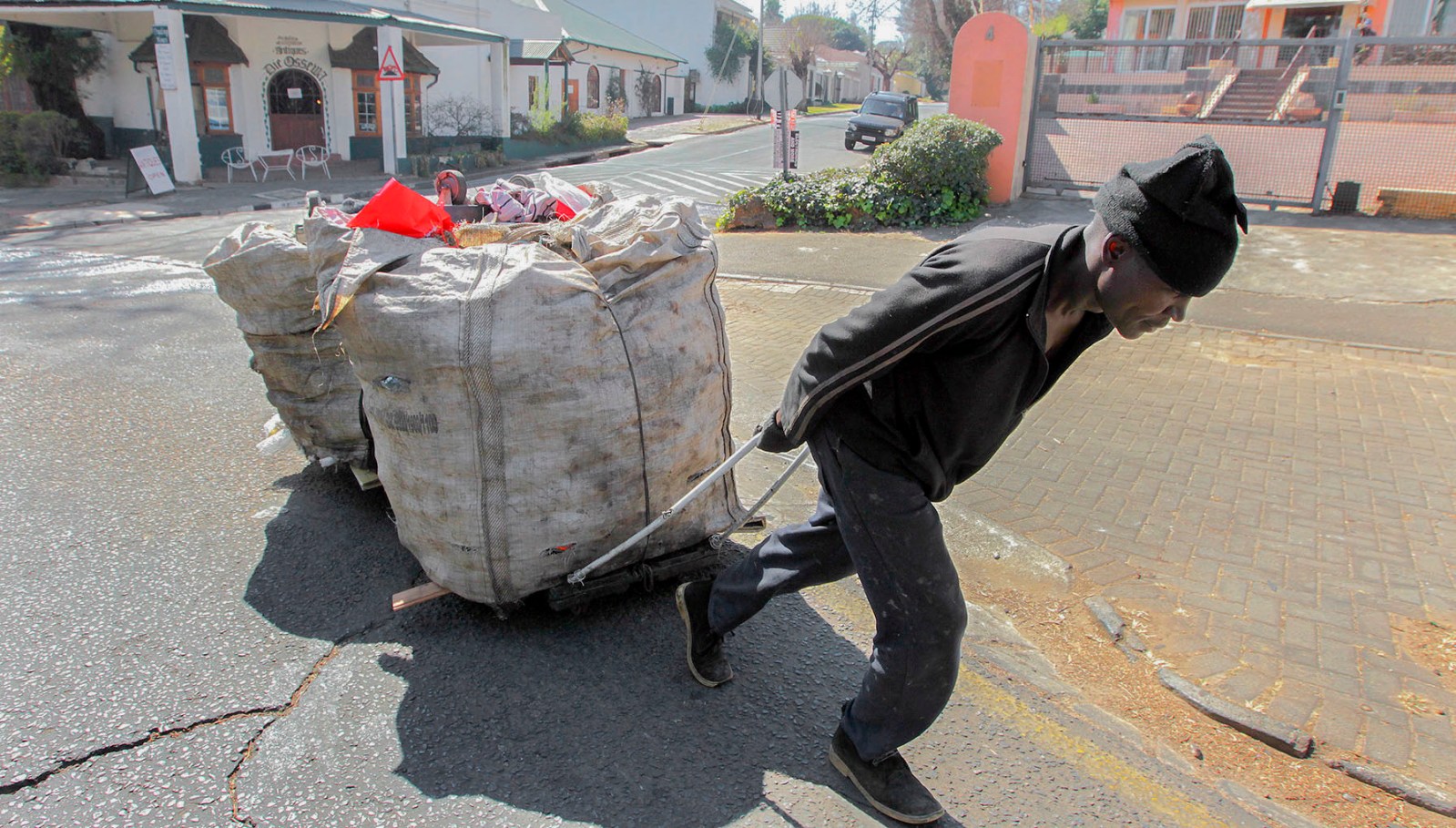 South Africa’s waste management service is in such a dire situation that informal waste pickers are stepping in to fill the gap, raising the need for their services to be integrated into the mainstream economy.

South Africa has a major waste management problem. In 2019, the Association for Water and Rural Development, a nonprofit organisation specialising in addressing issues of sustainability, inequity and poverty, reported that South Africans generate more than 54 million tons of waste a year. Of this, a maximum of only 10% is recycled or recovered for other uses, while at least 90% is landfilled or dumped.

Informal waste pickers play a vital role in the recycling and management of waste. According to the Council for Scientific and Industrial Research, informal waste pickers collect 80%-90% of all used packaging and paper that is recycled. Without them, South Africa’s recycling economy would not exist and some of the landfills would have closed long ago.

It is estimated that more than 215,000 informal waste pickers are working at the heart of the nation’s recycling economy, recovering mostly paper and packaging waste from the service chain and introducing these secondary resources into the country’s value chain.

Stefan van der Westhuizen, the director of RubiconZA, explains: “Integration starts with identifying, registering and documenting these waste pickers and their combined skills, and putting them to good use in the waste reclaiming sector, which they have constantly fed since reclaiming started getting traction in South Africa.

“This would mean some sort of public and private partnership between the waste picker groups and worker cooperatives, with a mentorship facilitation process in place that can oversee and train these workers to enable them to grow within the waste management stream.

“Instead of only reclaiming products, the idea is to support them in getting into a position where they can rework these materials into brand new proudly South African-made products that can be sold on the local market or international markets. Working your way up from just being a labourer, to being a part-owner in an industry that will just keep on growing.”

“No one has been active about bringing the integration guideline into effect. Not to disregard the efforts by the different stakeholders, but all these have been temporary solutions, more like pacifiers.

“You hear of guys given personal protective equipment, bags or bailing machines, but hardly do we hear how these make the lives of informal reclaimers any better. It is never sustainable, which is what the integration should be about,” he said.

Van der Westhuizen said, “Informal waste pickers work hard in harsh conditions, travelling long distances, mostly by foot, to get recyclable products that only earn them small change. While, on the other hand, they continue to be sidelined by the big, already established waste reclaiming companies and most of them are being exploited as free labour.”

“The informal waste pickers are continually being pushed further away from the product to the peripheries of cities where there is little economic activity, whereas the nature of the work needs you near places with high economic activity and where their clients can easily access their services — which impacts their income-earning opportunities and, ultimately, livelihoods,” said Gumbi.

The issue of informal waste pickers being moved to locations far from economic activities and the impact it has on livelihoods has been recently highlighted by the plight of the Mushroomville waste pickers, which Maverick Citizen reported on here.

Luyanda Hlatshwayo, a waste picker for 10 years and organiser of the African Reclaimers Organisation (ARO), told Maverick Citizen: “Our work is very humbling. Most of the time we move around very dirty because of where we sometimes have to dig to find products.

“So it is easy to be invisible to the world because we are often associated with doing drugs, being foreign, criminal activities and all sorts of ugly things, but the truth is we are helping and can still do more to help South Africa… minimise a wasteful consumer-driven society while creating formal jobs that can be properly measured.

“Nobody knows exactly how much waste we prevent from being dumped in the ground and contaminating the environment and no one really cares to keep track of that.

“Being integrated into the mainstream would help curb the waste management problem we have in South Africa and also change the negative perception we are often associated with.” DM/MC

A linchpin of SA’s recycling economy, informal waste pickers should be integrated into the mainstream economy