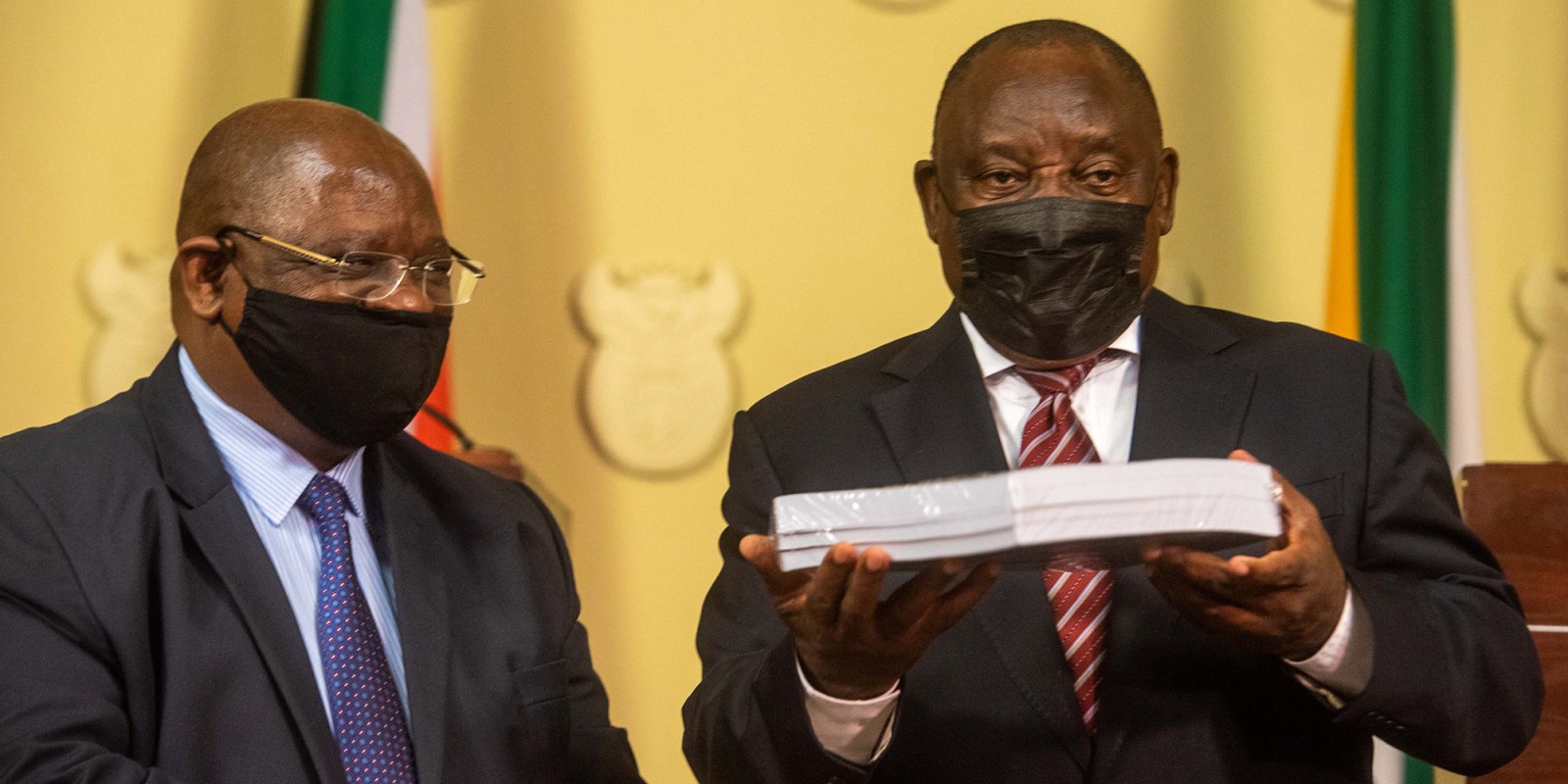 President Cyril Ramaphosa receives the first part of the report of the Judicial Commission of Inquiry into Allegations of State Capture from the Commission’s Chairperson, Acting Chief Justice Raymond Zondo on Tuesday, 4 January 2022 at the Union Buildings, Pretoria. (Photo: Alet Pretorius)

A timely recommendation in the Zondo Commission report is the call for the establishment of a single, independent and multifunctional anti-corruption agency, with a focus on public procurement.

The 856-page Zondo Commission report (Part 1) carries enormous weight, symbolically, substantively and literally. It offers a voluminous account of the political exploitation and destabilisation of state-owned enterprises and public entities that occurred during the Jacob Zuma presidency.

Attempting to wade through the enormity of the document and its legalese format is challenging. Fortunately, much of its content consists of passages from witness testimony and affidavits that had already been aired during its public hearings. The report’s summary of witness testimony and written statements are essential for constructing a narrative of the protagonists and their roles in alleged capture.

However, the essence of the report can best be drawn by distilling the commission’s own views on the persuasiveness of witness accounts and documentary evidence, what conclusions it made about the extent of capture and what recommendations it proposed.

The commission’s report conveys an overwhelming view that the state-owned enterprises and public entities (eg SAA, GCIS, SARS, Eskom and Transnet) at the centre of the probe were subject to undue and improper influence, collusion, political interference and financial malfeasance which caused these institutions significant financial and reputational damage.

The commission ultimately concluded that “capture” did in fact occur, despite there being no operational definition of “State Capture” as such, in its terms of reference. While this fact alone might feed into efforts by some to discredit and politicise the findings, this amounts to little more than a game of semantics when tested against the commission’s meticulous appraisal of the evidence.

There are many instances in the report where the commission was able to corroborate and substantiate evidence presented by some witnesses who highlighted wrongdoing, while challenging the credibility of and extracting concessions from other witnesses; and where the commission drew seemingly logical conclusions about wrongdoing in the absence of evidence or plausible claims to the contrary.

Some of these recommendations appear sensible, such as adopting a more contingent approach to the procurement of goods and services that strikes a better balance between efficiency and integrity, and clarifying the core aim behind procurement decisions to reduce confusion and mitigate the risk of abuse from competing aims outlined in regulations.

The commission also believes that there must be greater effort to professionalise the role of procurement officers in the state as a means of highlighting the consequential nature of this task, and to incentivise capacity building and integrity management. This latter recommendation is also consistent with the tabling in December 2020 of an overarching framework to promote professionalisation in the public service.

The commission makes other recommendations that, despite being consistent with its appraisal of the evidence, require more detailed reflection given what we’ve learnt about the longstanding and pervasive problem of corruption in the public sector.

One of the recommendations calls for government officials and representatives from other sectors to jointly commit to a “National Charter against Corruption”, which is intended to lend symbolic and substantive support to the fight against corruption.

It is difficult to see how yet another symbolic pledge of commitment to fighting corruption can be taken seriously by South Africans, given the apparent failure of pre-existing sets of ethical codes, strategies, charters and legislative directives to prevent capture.

This recommendation is therefore likely to ring hollow unless it is explained how equipping it with legal force will achieve what the existing Prevention and Combating of Corrupt Activities Act (2004) has seemingly been unable to achieve.

A second and more timely recommendation is the call for the establishment of a single, independent and multi-functional anti-corruption agency, with a focus on public procurement. The call for such an agency resurrects past debates about whether South Africa should adopt a single versus multi-institutional response to fight corruption.

More than eight years ago I assessed the merits of both approaches in an academic article published prior to the spectre of “capture” having taken root. In it, I referred to the unconducive and hostile political environment that has historically scuppered the effectiveness of previous corruption-fighting institutions resembling, but not fully meeting, the standards of independence called for by the commission, eg the DSO/Scorpions and the DPCI/Hawks.

Of course, one could argue that putting all of the state’s anti-corruption eggs into one institutional basket by creating a single independent super-agency outside direct executive control comes with risks — what happens if and when the agency is itself compromised, or even captured? Will it be able to appropriate sufficient resources from Parliament to properly probe procurement corruption in executive bodies? Will executive bodies cooperate with it or act with intransigence or seek to obstruct its activities?

It is unlikely that the commission’s renewed yet novel call for the creation of such an agency will shield it from these kinds of operational hazards, as the experience of other Chapter Nine institutions has shown.

But, the single versus multi-institutional response has also become something of a red herring – it is not necessarily a choice between one and many; we can and should have both.

State Capture has irrevocably changed the conditions on the ground and the tenor of the debate: executive institutions, including Cabinet departments like Treasury, have themselves become vulnerable to capture, and South Africa cannot now afford not to create a truly independent anti-corruption agency free from direct executive oversight. DM

Dr Vinothan Naidoo is senior lecturer in the Department of Political Studies, University of Cape Town.