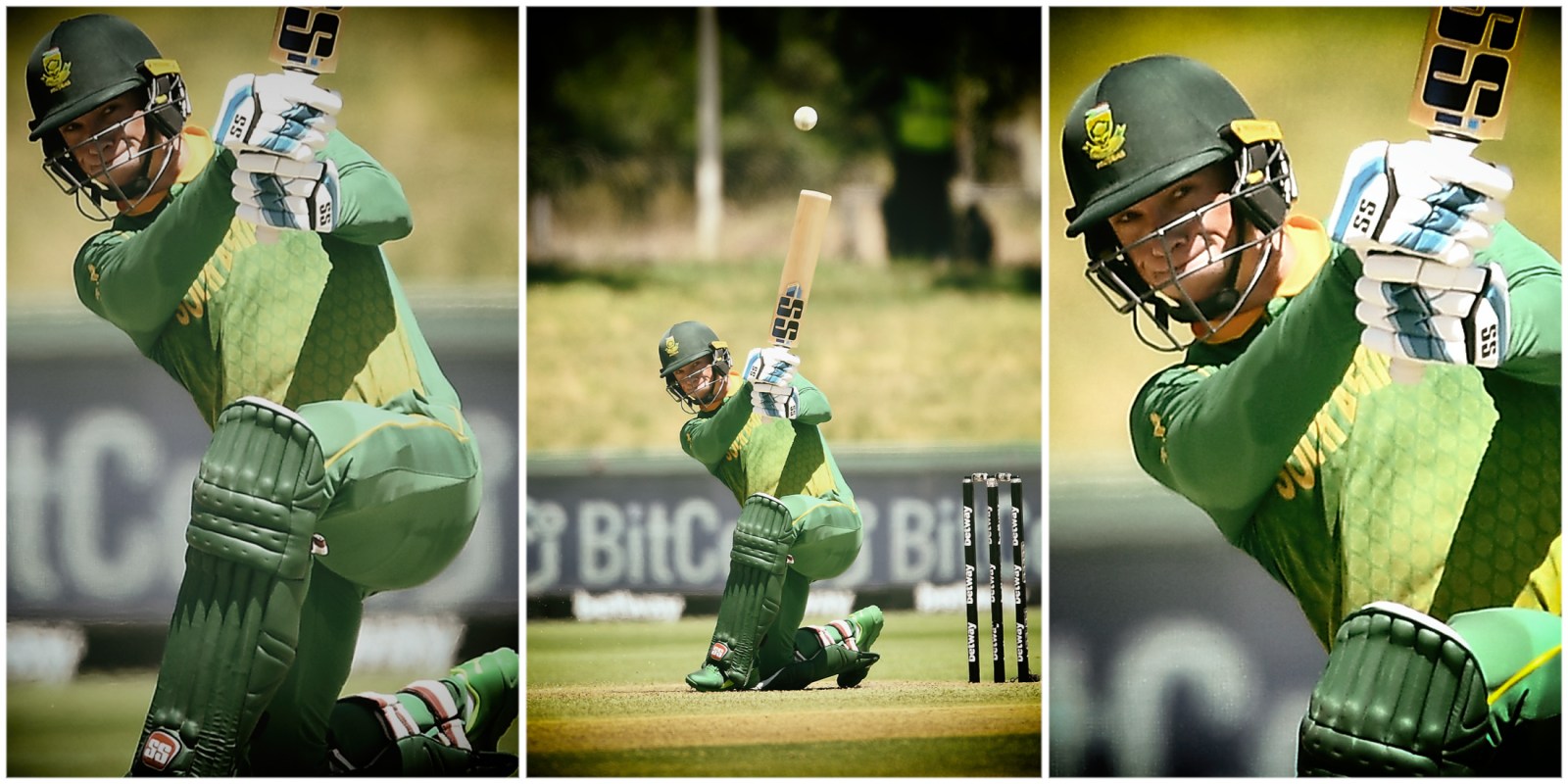 Rassie van der Dussen of South Africa reached his highest score of 129 in ODIs in the first One Day International match against India at Boland Park in Paarl on 19 January 2022. The Proteas won the match by 31 runs. (Photo: Ashley Vlotman / Gallo Images)

Two magnificent centuries by South Africa’s premier ODI batters laid the foundation for an excellent 31-run victory against India in the first One Day International match of the three-match series at Boland Park on Wednesday.

The skipper was perfectly accompanied by his Lions teammate, Rassie van der Dussen, who scored a sensational 129 not out off 96 deliveries, striking nine fours and four huge sixes as both batters raised their bats to their second ODI hundreds.

Van der Dussen brought impetus to the crease as he struck at better than a run a ball throughout his innings, displaying a wide array of attacking shots which included wonderfully timed reverse-sweeps and conventional sweeps off the Indian spin bowlers.

The pair, who have accumulated many good partnerships together at Test and domestic level, put on 204 runs off 183 deliveries today, a record ODI partnership for South Africa against India.

“We’ve played together a long time and I always enjoy batting with Temba. His running between the wickets especially is something I feed off well. I think we complement each other quite well,” said Van der Dussen, who was named man of the match.

The partnership was made even more special considering Bavuma and Van der Dussen were thrust together when the Proteas were languishing at 68-3 in the 18th over.

Bavuma bided his time at the crease as the skipper saw out a tricky period at the start of the day’s play which included an excellent display of swing bowling by Bhuvenshwar Kumar and Jasprit Bumrah in particular.

“I’ve obviously played with Temba for quite a long time in my career. He and I have sort of grown to know each other’s gameplans and mannerisms and strengths and weaknesses… There’s certain things I know Temba does when he’s playing well and I do when I’m playing well so it’s a matter of reminding ourselves of that,” Van der Dussen said.

“It was very hot out there today and when Temba got to about 70 or 80 he started to feel the heat a bit and he constantly asked me to remind him to keep the intensity up and to stay in his game plan and stay disciplined.

When Bavuma was eventually dismissed, trying to accelerate the run-rate, the Proteas were on 272 for two in the second-last over of the innings. The Proteas skipper struck an attempted yorker by Bumrah straight down the throat of the fielder at long-on — skipper KL Rahul took a comfortable catch.

The Proteas innings, however, did not start off as smoothly as it finished.

With scorching warm conditions and a slow wicket that favoured spin bowling, India could have been excused for thinking they were playing at home.

The touring team made early inroads as Janneman Malan (6) and Aiden Markram (4) were dismissed cheaply. Markram was needlessly run out while Bumrah snatched the wicket of Malan with an excellent away swinging delivery that found the batter’s edge and was caught behind by Rishabh Pant. The unorthodox fast bowler was the stand-out among the Indians, claiming figures of two wickets for 48 runs in his allotted 10 overs.

The returning Quinton de Kock provided some resistance to the early onslaught, but was ultimately clean bowled by Ravi Ashwin for 27 runs off 41 deliveries.

The Proteas, playing without star bowler Kagiso Rabada, turned to the off spin of Markram to open the bowling — a decision that turned out to be a masterstroke by Bavuma as the finger spinner dismissed Indian captain Rahul for 12 runs off 17 deliveries, brilliantly caught behind by De Kock.

After the captain’s dismissal, India were cruising to South Africa’s total as Shikhar Dhawan and Virat Kohli put on a superb second-wicket partnership of 92 runs off 102 balls. Opening batter Dhawan brought up his 34th ODI half century before he was eventually dismissed for 79 off 84 deliveries, striking 10 boundaries.

Keshav Maharaj cleaned up Dhawan with a ball that turned prodigiously and despite a decent scorecard of 138-2 at the halfway mark, it signalled the beginning of the end for India.

India lost their next four wickets for just 50 runs, leaving them at 188-6 after 36 overs.

Kohli brought up an excellent half-century in that time before he miscued a sweep shot off the bowling of Tabraiz Shamsi and was caught at short midwicket by Bavuma.

Shamsi finished on figures of two wickets for 52 runs in his 10 overs, sharing the spoils with his compatriots as Andile Phehlukwayo and Lungi Ngidi also picked up two while Markram and Maharaj picked up a wicket apiece.

The fall of three India middle-order wickets — Shreyas Iyer (17), Pant (16) and debutant Venkatesh Iyer (2) — in the space of 12 balls was the final nail in the coffin for India’s chance of victory.

Shardul Thakur struck a quickfire unbeaten knock of 50 runs off 43 deliveries, hitting five fours and one lusty six, but it was too little too late as India finished on 265 for eight in their 50 overs.

The second ODI in the series takes place on Friday at the same venue. The Proteas will look to bottle their successful formula displayed today and use it again in two days as they try to secure an ODI series victory after their excellent home Test series victory against the same opposition last week. DM