Johannesburg: A day of hocus-pocus, theatrics and whole lot of caucuses at Tuesday’s council sitting 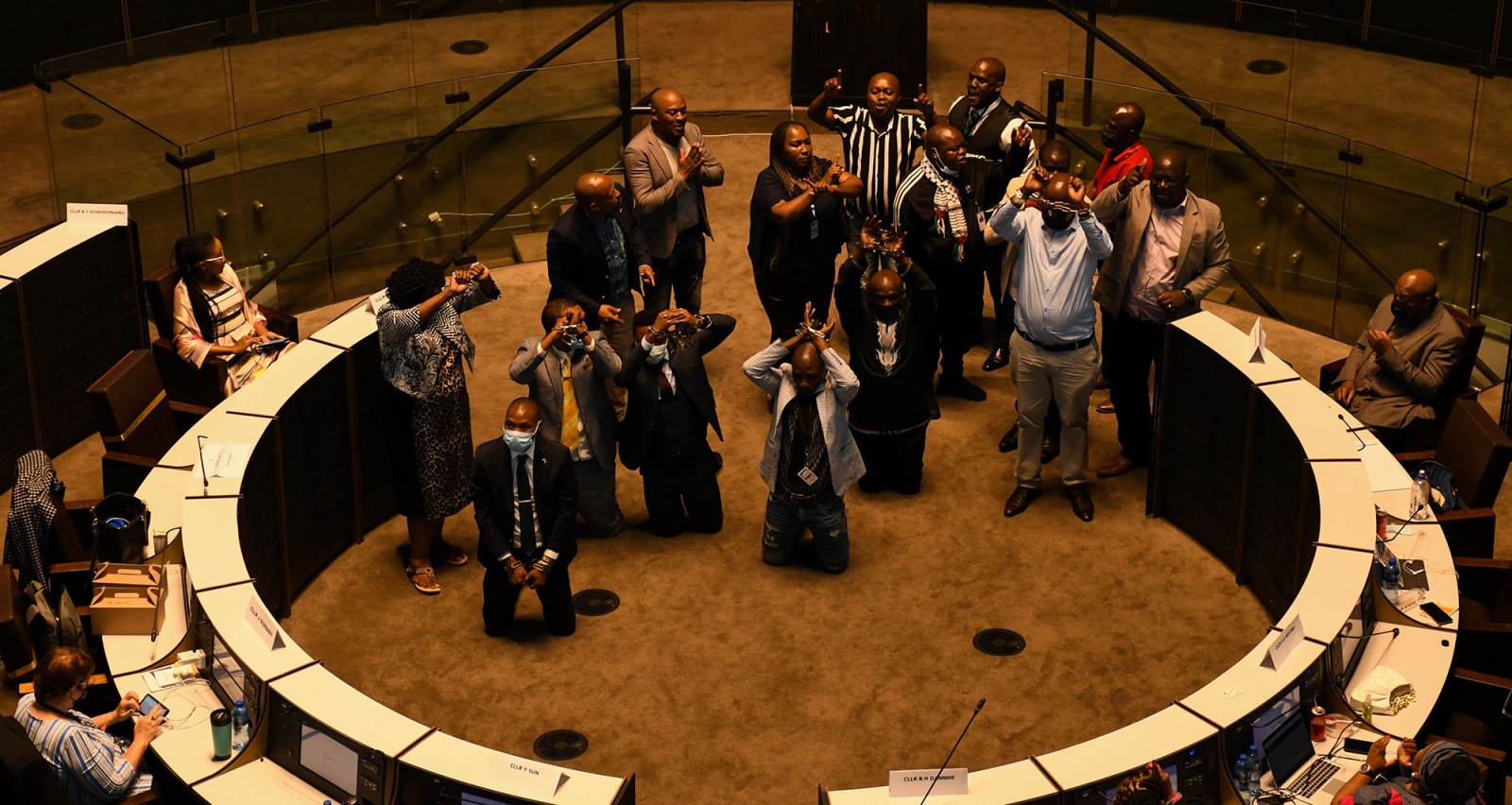 The minority opposition bloc stage a demonstration during the City of Johannesburg's resumed council meeting on Tuesday. (Photo: Julia Evans)

In a repeat of its first meeting – minus the brawling – Tuesday’s resumed sitting of the City of Johannesburg council collapsed into chaos, including much shouting, singing and dancing and endless delays through the day.

Following last Thursday’s chaotic first City of Johannesburg council meeting, during which councillors were injured, the sitting resumed at 10am on Tuesday to elect a chair of chairs and chairpersons of Section 79 portfolio committees by a show of hands.

However, again, things did not go smoothly from the start.

With Metro Police officers stationed inside and outside the chambers, along with paramedics, Speaker Vasco da Gama opened the meeting sombrely: “We ended the previous council meeting on a low, low note given the shocking and unacceptable conduct of some of the councillors in this chamber.”

“Councillors, no matter what our differences may be, there is no excuse for bad behaviour. And we can never again allow for the intimidation of councillors to occur in what is supposed to be the most sacred space of our democracy in this city.

“[I] trust that there will not be a repeat of such an abhorrent conduct in this council ever again.”

But before proceedings could even begin, the chambers were filled with the shouts of councillors complaining that they didn’t have water, prompting Da Gama to explain that water canisters were provided outside because last time councillors were injured with bottled water.

The meeting was adjourned for 30 minutes after an ANC councillor requested time to collect water. The first of many delays, it stretched over more than an hour.

“Councillors, can we continue?” asked Da Gama – a question he would ask many times throughout the day.

A whole lot of caucuses

Once bottled water arrived, the EFF asked for a 30-minute caucus break, which Da Gama granted.

DA councillor Leah Knott stood up and said any other party that wanted to caucus should use this time to do so, to which opposing councillors shouted: “No! Who are you to say that?”

After the break the EFF once again called for a secret ballot to vote for chairpersons. The minority opposition then called for a caucus break, which was refused by the speaker.

ANC caucus leader Mpho Moerane gave Da Gama his word that they would not disrupt chambers, and asked the speaker to allow the minority opposition a caucus break, which was granted.

After that caucus, the meeting adjourned for lunch, and an hour and a half later, Patriotic Alliance (PA) chief councillor Ashley Sauls asked for another caucus break. With a shake of his head, Da Gama agreed.

During this break the EFF started singing and dancing in the chambers.

The meeting resumed at 4.45pm, nearly seven hours since it began, but there was another problem.

The EFF, the ANC and opposition minority parties once again demanded that the elections for the chair of chairs, as well Section 79 committees, be held through a secret ballot, taking issue with the “questionable” method of a show of hands.

But Da Gama was resolute, which ignited an uproar from opposition councillors, after which EFF members rounded on the PA’s Sauls with cries of “traitor” after he argued a show of hands was a fair process. Sauls then drew loud applause from DA coalition members when he shouted: “The EFF does not run this city! The EFF does not run these chambers!”

This was followed by a theatrical demonstration by the minority opposition bloc (African Independent Congress, PAC, GOOD, Al Jama-ah) in the chambers foyer, their hands chained and held above their heads, which they said symbolised being prisoners of Da Gama.

Amid the chaos, and continued singing, Da Gama proceeded to the nominations for the chair of chairs.

The EFF failed to confirm the nomination of their candidate, so after more than eight hours, COPE Councillor Colleen Makhubele was elected unopposed as the chair of chairs. Makhubele’s nomination had been seconded by ActionSA’s Funzi Ngobeni at the last meeting, while the EFF had nominated Nonhlanhla Radebe, with support from the ANC.

The EFF, ANC and minority opposition decided to withdraw their nominations for chairpersons of oversight committees and the chair of chairs, saying they didn’t want to be part of a process in which the council speaker disregards the rules of council. They then exited chambers.

As more councillors left, a 50% quorum could not be met and the meeting collapsed about 7.20pm.  Da Gama postponed the meeting to 27 January.

ANC leader Moerane said afterwards they left the chamber because he did not want to go back on his word and disrupt the meeting, and reiterated that a secret ballot would ensure the process was free and fair, because when no one is watching you when you vote, “you vote with your conscience”.

The PA’s Sauls said the opposition did not leave the meeting “in the interest of the suffering residents of this city”, but because “this vote would have not served their self-interest”.

ActionSA councillor John Moodey agreed, telling Daily Maverick: “That was filibustering and that was politicking. As the speaker said, they [ANC and EFF and alliance partners] came in here with the intention to disrupt the council.”

He explained that the opposition was trying to get the council to collapse at three successive meetings, which would allow the MEC for human settlements, urban planning and cooperative governance and traditional affairs, Lebogang Isaac Maile, to put the city under administration, forcing the re-election of the mayor and speaker. DM