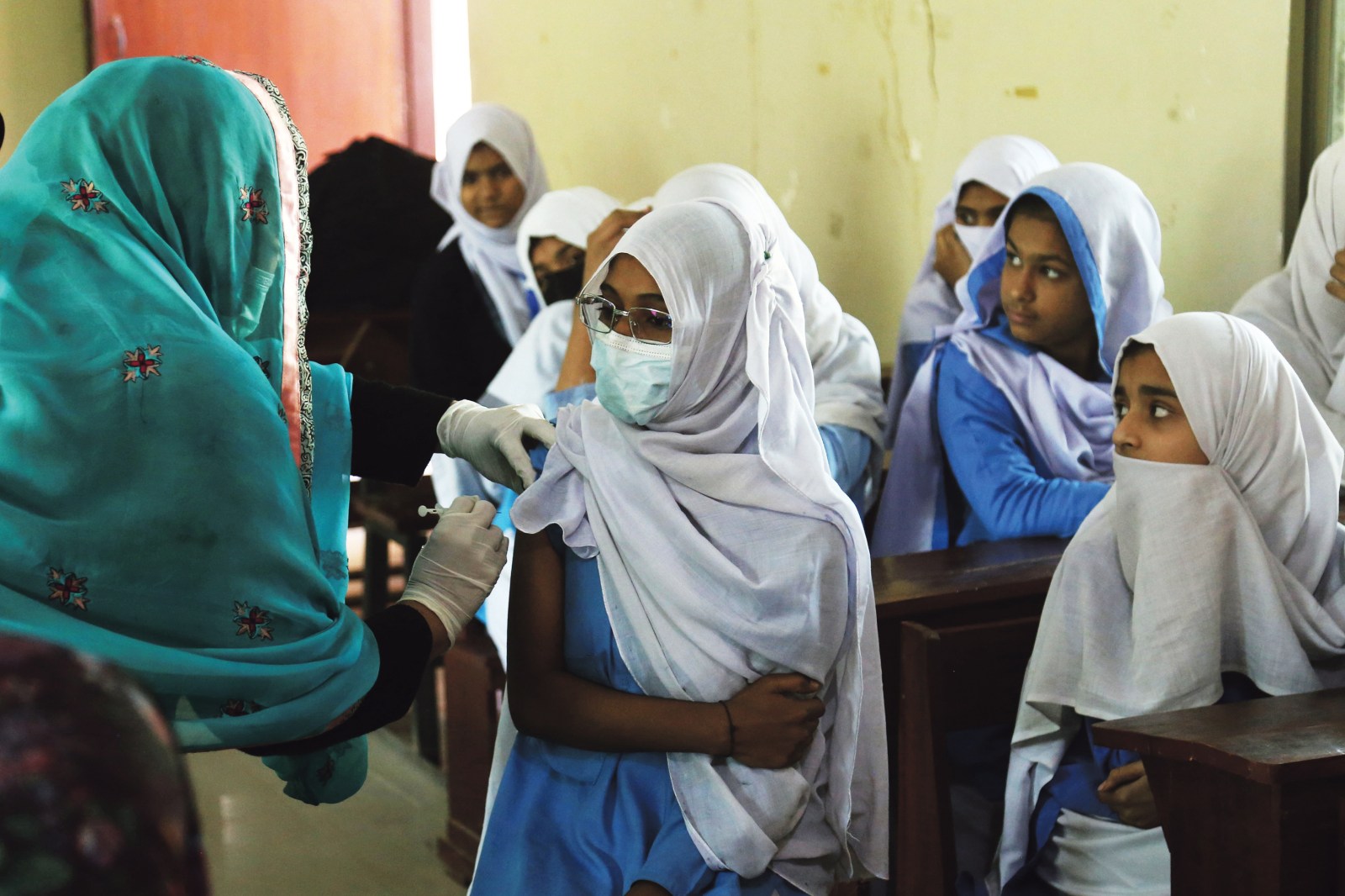 A Pakistani student receives a Covid-19 booster dose amid a surge in Omicron cases in Karachi on 14 January 2022. The Pakistan government has launched a door-to-door campaign to vaccinate women, who are lagging behind men in rates of coronavirus inoculation as the country enters a fifth wave. On 7 January it reported nearly 1,300 cases in a single day, its highest tally in two months. (EPA-EFE/Rehan Khan)

While South Africa is at the tail-end of its Omicron wave, many countries across the world have yet to reach a peak in their surges.

The countries of Europe and Asia are under intense pressure from Covid-19, having seen more than seven million newly reported cases of the disease in the first week of 2022, in many cases fuelled by the Omicron variant.

This was according to a statement issued by Dr Hans Kluge, World Health Organization regional director for Europe, on 11 January.

“Most of the European countries, as well as the US, they are yet to peak,” said Professor Shabir Madhi, dean of the Faculty of Health Sciences and professor of vaccinology at the University of the Witwatersrand.

“They probably will peak pretty soon, in the next week or so, and then it will probably be another three to four weeks – based on the projection in South Africa, as well as the rapid rate of increase in those countries – before they start going towards the tail-end of their wave as well.”

One of Kluge’s concerns is the pressure that the rapid spread of Covid-19 is placing on healthcare workers and facilities.

“It is challenging health systems and service delivery in many countries where Omicron has spread at speed, and threatens to overwhelm in many more,” he said in his statement.

By contrast, the fourth wave has placed less pressure on South Africa’s healthcare system than previous surges, according to Professor Salim Abdool Karim, the director of the Centre for the Aids Programme of Research in South Africa.

“In this instance, the hospitals didn’t really come under pressure,” said Abdool Karim. “We try [to] treat the restrictions in relation to hospital admissions, and because the hospitals’ admissions never went up to a point where we were concerned, there was no need in South Africa to institute other measures.”

Other countries have different thresholds for admitting patients to hospital, said Madhi.

“In South Africa, you’re only going to admit a patient with Covid-19 if the patient actually requires supplemental oxygen. In Europe or in the US, they might be admitting patients, as an example, just to observe them to make sure that they’re not too sick.”

Due to these differences, ICU and high-care rates, rather than infectivity rates, are a better indicator of the severity of Omicron in other regions, according to Dr Angelique Coetzee, chairperson of the South African Medical Association.

Differing age profiles can also play a role in an area’s hospitalisations, said Karim. “[New York has] got a lot more elderly people, and elderly people get more severe disease, and they also have a lot of unvaccinated people,” he said. “When you take our elderly population, we have very high vaccine coverage. It’s over 70%.”

In South Africa, many people were infected with earlier variants of Covid-19, such as Delta and Beta. This, coupled with moderate vaccine coverage, may have contributed to the country’s low rate of deaths and hospitalisations under Omicron, said Professor Glenda Gray, president and CEO of the South African Medical Research Council.

“The question is, is Omicron less virulent, or are South Africans better protected given this hybrid immunity that we’ve seen?” said Gray. The observation of other countries with differing levels of prior exposure and vaccination coverage is important in answering this question definitively, she added.

In his statement, Kluge encouraged countries that have yet to be hit by the Omicron surge to act immediately in mandating the use of masks in closed settings and supporting citizens in getting their full vaccine series.

“Omicron moves faster and wider than any SARS-CoV-2 variant that we have previously seen,” he said. DM