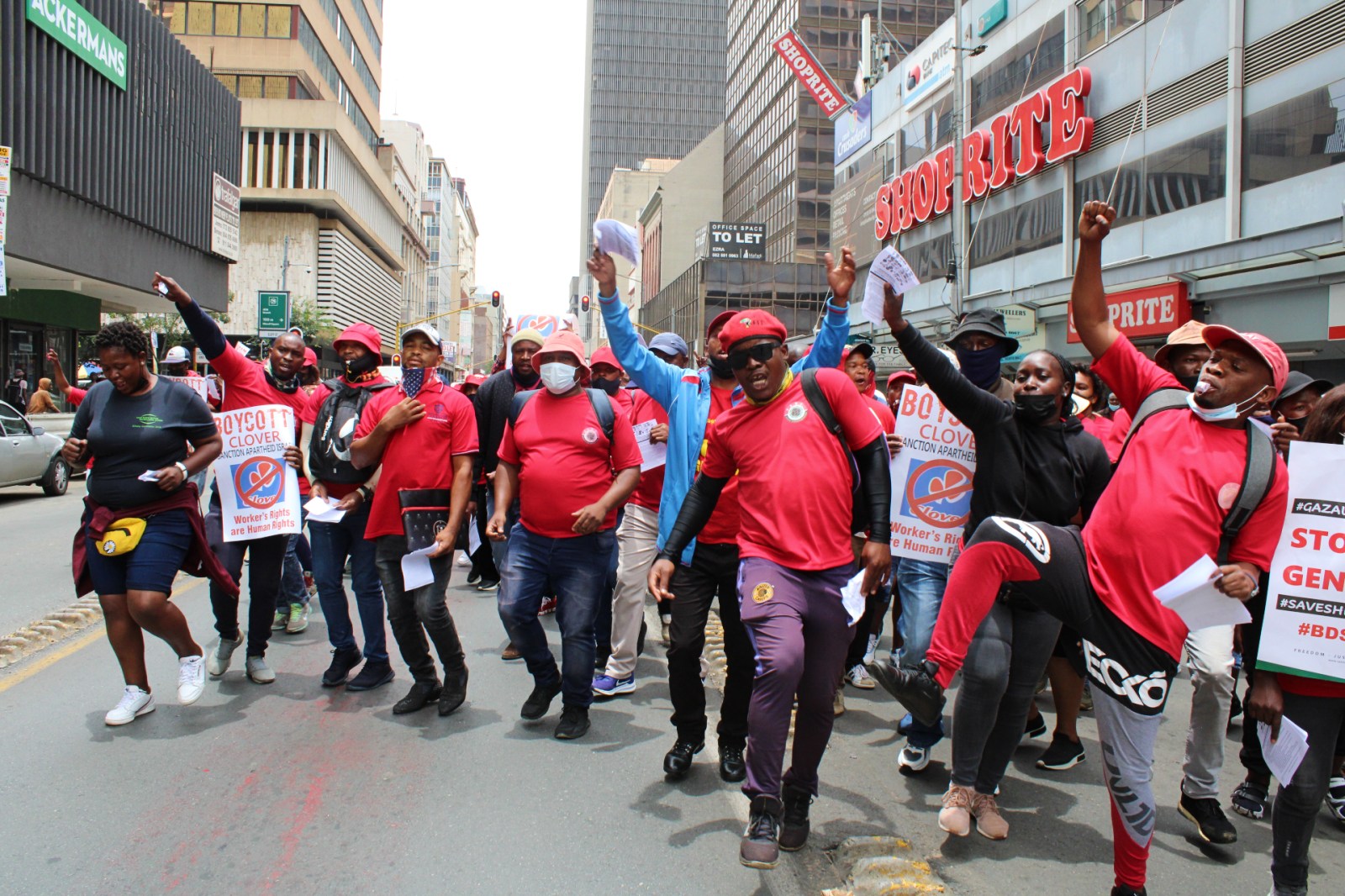 Clover workers, who have been on strike for nearly nine weeks, march through Johannesburg city centre on Tuesday, calling for a boycott of the company’s products. (Photo: Masego Mafata)

The workers are demanding that the company stop plans for further retrenchments and reinstate all workers. They also want the company to be independent of the Israeli company Central Bottling Company which owns Clover through the Milco SA consortium.

About 70 striking workers from Clover marched through Johannesburg’s inner city on Tuesday, calling on the public to boycott Clover products.

The workers, many of whom are members of the Food and Allied Workers’ Union (Fawu) or the General Industrial Workers Union of South Africa (Giwusa), marched from the offices of the Commission for Conciliation, Mediation and Arbitration (CCMA) in Marshalltown to the city centre. They went into grocery shops and removed Clover products from the shelves, leaving them in shopping trolleys.

The strike by Clover workers has entered its ninth week and workers say they won’t stop until their demands are met. They are demanding that the company stop plans for further retrenchments and reinstate all workers. They also want the company to be independent of the Israeli company Central Bottling Company (CBC) which owns Clover through the Milco SA consortium.

Last week, workers managed to secure an agreement with Clover at the CCMA that overdue bonuses would be paid by Friday, 14 January. But many workers said they had not received the full amount.

“We are confused because this is a 13th cheque and we are supposed to get paid the same amount as our salary but that has not been the case. As someone who earns R12,000 I expect to receive R12,000, not the R400 that they deposited,” said Justice Mokoting, who works at the Clover factory in City Deep.

When the workers arrived outside Shoprite in Marshalltown, security guards tried to prevent them from entering but the guards were outnumbered.

“We are not here to loot, we just want to remove the Clover products from the shelves,” said one worker to a security guard.

Inside the shop, the workers took trolleys and filled them with Clover products, leaving “Boycott Clover Products” pamphlets in some of the trolleys. The workers also handed out pamphlets to shoppers and onlookers in the streets as they marched through town.

Included in the reasons for the strike listed in the pamphlet are the workers’ opposition to “major restructuring” carried out by Clover which entails a change from nine-hour shifts to 12-hour shifts, making work compulsory on Sundays and public holidays and the introduction of a 20% salary cut.

Some shopkeepers closed their doors out of fear that their stock would be stolen and shops vandalised. Tensions flared briefly when the workers tried to break into the Boxer Superstore at the Park Central Shopping Centre near Noord Taxi Rank.

An elderly shopper, who asked not to be named, said she was scared when she heard the workers approaching.

“I didn’t know what was happening. I almost dropped the items that I had in my hand,” she said. She was able to pay for her items and leave the store.

The workers returned to the CCMA offices, where their case of unfair dismissal was heard at 2pm. Speaking to workers outside the offices, Giwusa national organiser Charles Phahla promised feedback on the progress of the case on Wednesday.

He said the unions would also approach the CCMA at a later stage to address problems workers had raised with the payment of bonuses.

Clover management had not responded to GroundUp’s questions at the time of publication. Last week, the company said trading conditions were difficult, with poor economic growth, rising costs and subdued consumer spending. Covid had added to these pressures.

“For these reasons a comprehensive strategic review of all aspects of Clover’s business was undertaken, which led to the difficult decision to restructure.” Clover said it had explored “all possible avenues” to minimise retrenchments.

During a media briefing in Johannesburg on Monday, he said Saftu would hold a Working Class Movement meeting to “look at solidarity plans and elaborate a further programme” on Wednesday. DM