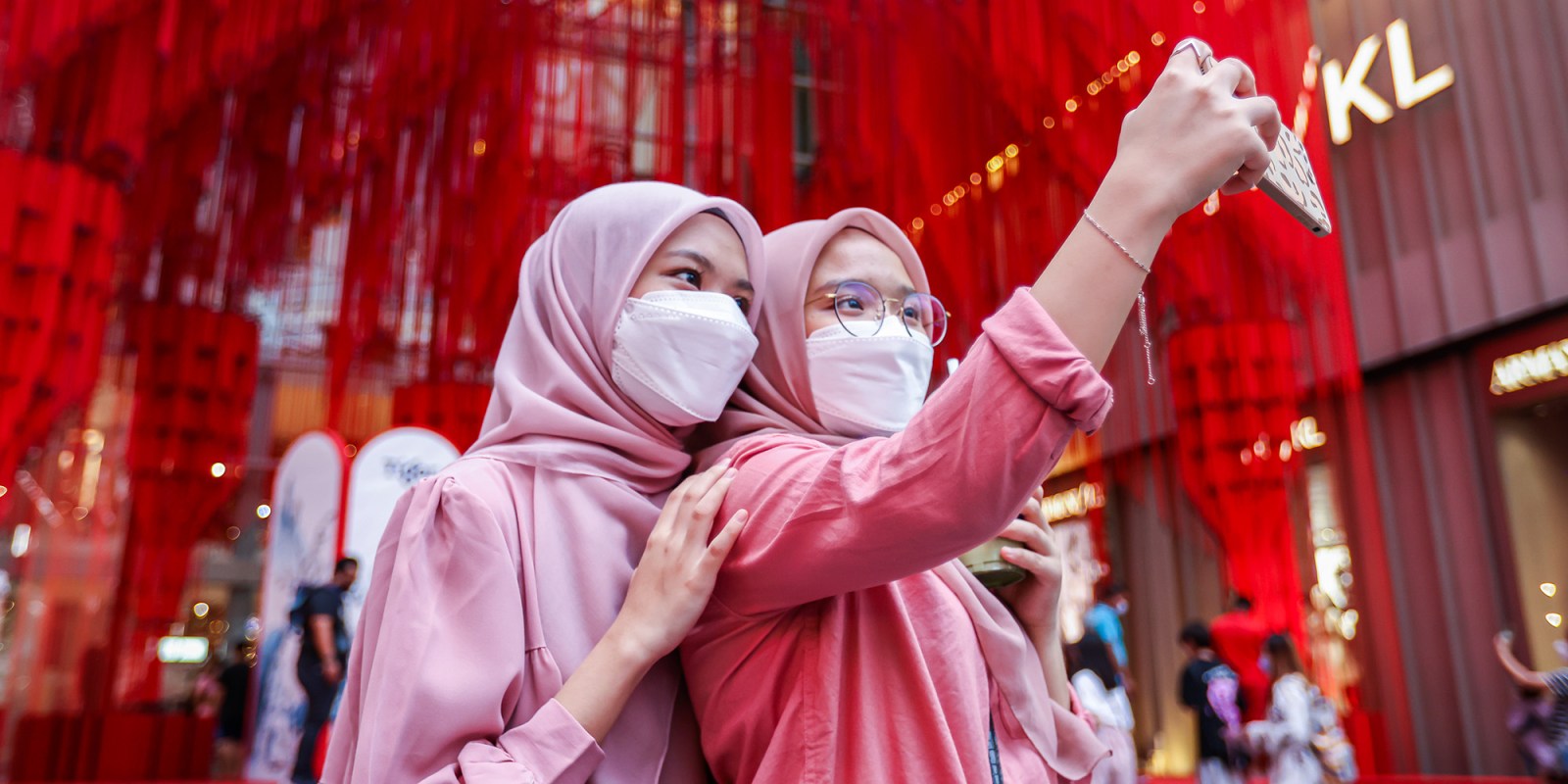 Two women wearing face masks as a preventive measure against the spread of coronavirus pose for a selfie at the entrance of Pavilion Kuala Lumpur on 15 January 2022 in Kuala Lumpur, Malaysia. (Photo: Annice Lyn / Getty Images)

China halted ticket sales to the general public for the 2022 Winter Olympics and instead will invite groups of spectators to attend the Games.

Dr Anthony Fauci, President Joe Biden’s chief medical adviser on the pandemic, said it’s too soon to know whether the rapid spread of the Omicron variant will hasten the end of the health crisis. But Pfizer Chief Executive Officer Albert Bourla said he sees a return to normal life coming soon.

France tightened rules on access to hospitality, leisure and travel, narrowing the options for unvaccinated people. In Japan, Tokyo Governor Yuriko Koike is seeking stronger Covid-19 restrictions in a bid to slow an escalating outbreak.

US General Mark Milley, chairman of the Joint Chiefs of Staff, tested positive for Covid-19 on Sunday. He’s experiencing minor symptoms and is working remotely, the Department of Defense said in a statement. 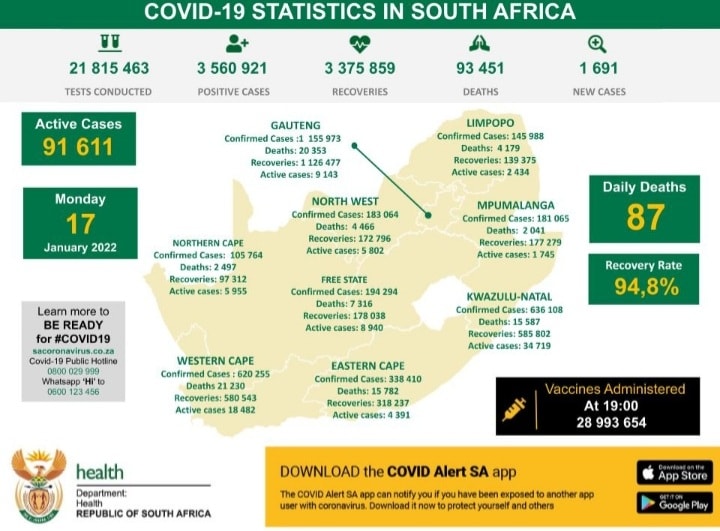 Citing the “current grave and complicated situation” with Covid-19 in China, the organisers of the 2022 Beijing Winter Games halted ticket sales to the general public.

Instead, select groups of spectators will be invited to attend. They’ll be required to obey strict virus precautions before, during and after the event, the official organising committee said on its website on Monday.

The move reverses an earlier decision to limit Olympic ticket sales to attendees from mainland China. The games are scheduled to begin on February 4.

The African Union indicated to Moderna two weeks ago that it does not want the vaccines that the company will have available for them for the second quarter of this year, Moderna Chief Executive Office Stephane Bancel said at a virtual World Economic Forum event.

“What I’m hearing from colleagues on the ground is that low-income countries struggle on how to get those shots in arms,” Bancel said.

“I don’t think the problem is access to doses any more. It’s really getting those shots into arms and I think we should be able to do more to help low-income countries to get people vaccinated.”

White House chief medical adviser Dr Anthony Fauci said it’s too soon to say whether the Omicron variant will herald a shift in the Covid-19 pandemic to endemic.

“It’s an open question as to whether or not Omicron is going to be the live virus vaccination everyone is hoping for because we have so much variability with new variants emerging,” Fauci said on Monday at the World Economic Forum’s Davos Agenda online conference.

The fact that the virus’s mutations appear to be able to evade some immune response through vaccines and infection will make achieving herd immunity difficult, he said.

Angola lifted most Covid-19 restrictions, reopening schools and gymnasiums and allowing restaurants and supermarkets to extend their trading hours.

The country reported 170 new cases on Sunday, down from more than 3,000 a day at the end of last month, the Health Ministry said on Monday. The test positivity rate is 13.6%.

The government still requires citizens, including children 12 and older, to get vaccinated to access public places such as schools and state offices. Beaches and public swimming pools remain closed and no tourists are allowed.

France’s Parliament adopted a new set of rules that will require proof of vaccination for people to eat in restaurants, attend the theatre or get on an airplane.

The changes tighten the so-called health pass that France has had in place for months by removing the option that allowed for a recent negative test. About 80% of France’s total population has received at least one dose of vaccine, according to the health ministry.

The recent surge in cases may have reached a peak, Arnaud Fontanet, a member of the government’s scientific advisory board said on France Info radio. France recorded 278,129 cases on Sunday, the lowest figure in six days and below the level reported the previous Sunday.

The International Labor Organization (ILO) downgraded its employment forecast, projecting a world shortfall of 52 million full-time jobs in 2022 relative to the fourth quarter of 2019.

The global unemployment rate is expected to remain above pre-pandemic levels until at least 2023, the ILO said.

Uncertainty created by Covid-19 variants continues to weigh on the jobs market – particularly in low- and lower-middle-income countries, the Geneva-based organisation said on Monday.

“We are well positioned to get there in the spring thanks to all the tools at our disposal: tests, very effective vaccines and the first treatments that can be taken at home.”

The Pfizer CEO – whose company manufactures vaccines and Covid-19 treatments – cautioned that evidence of the Omicron variant’s lower virulence does not mean the new coronavirus will disappear.

“We’ve had so many surprises since the start of the pandemic,” he said. “We will probably have to live for years with a virus that’s very difficult to eradicate.”

A  review of the so-called Plan B Covid curbs in place in England could come as soon as this week, Reuters reported, citing a senior figure in the UK government.

Current measures include mandatory Covid passes to gain access to venues and large events as well as requirements to wear masks on public transport and advice to work from home if possible. These are set to expire on January 26.

The Tokyo government will seek stricter measures as a new wave of infections fills up hospital beds. Japan’s Prime Minister, Fumio Kishida, is expected to speak with ministers and make a decision as early as Wednesday, broadcaster FNN reported earlier.

Governor Yuriko Koike said that occupancy of hospital beds designated for Covid patients in the city is expected to surpass 20% – a threshold she set to seek a quasi-emergency. In Tokyo about 19% of beds were occupied as of Sunday.

Japan reported more than 25,000 new cases each day over the weekend. Tokyo recorded 4,172 new cases on Sunday, more than tripling versus a week ago. Japan didn’t report any deaths on Sunday, according to NHK. DM/MC