The Day-to-Day Market for Physical Oil Cargoes Is Boomi...

The Day-to-Day Market for Physical Oil Cargoes Is Booming

The Day-to-Day Market for Physical Oil Cargoes Is Booming

Thick black oil sits on the pipe work fitting of an oil pumping jack, also known as "nodding donkey" in an oilfield near Almetyevsk, Russia, on Sunday, Aug. 16, 2020. Oil fell below $42 a barrel in New York at the start of a week that will see OPEC+ gather to assess its supply deal as countries struggle to contain the virus thats hurt economies and fuel demand globally.

The world’s physical oil market is running hot, offering a boost to bulls.

Prices for cargoes reaching oil refineries in Asia in two or three months’ time have been rallying strongly all over the world so far this year.

The time lag between when those shipments are purchased and when they’ll reach the world’s top importing region means the traders are effectively having to take a view on how the current omicron outbreak will play out, especially in China. Their upbeat outlook is further underpinned by the fact that two further demand headwinds — the Winter Olympics in Beijing and the Lunar New Year — will also be out of the way when the barrels arrive.

“The oil market is unbelievably resilient, and bulls are in full control,” said Tamas Varga, an analyst at PVM Oil Associates Ltd. “The physical crude market is way over the forward or futures contracts. It implies genuine prompt tightness.”

Demand globally has proved stronger than expected as the latest coronavirus variant inflicts a softer hit to the economy than anticipated, Fatih Birol, the executive director of International Energy Agency said Wednesday, mainly due to “milder Omicron expectations.” Supply disruptions have also helped, he said.

The resulting market strength is apparent in cargoes loaded from regions including Russia’s Far East, the Middle East, the North Sea, West Africa, the Baltic Sea and the barrels from U.S. shale producers.

Spot differentials of Abu Dhabi’s Murban crude to be shipped in March surged by more than $1 per barrel, while Russia’s Sokol crude, supplied from Sakhalin Island in the east of the country, fetched a premium of about $5.60 a barrel above its benchmark, according to traders. That’s a gain of $1.50 in the space of a month. 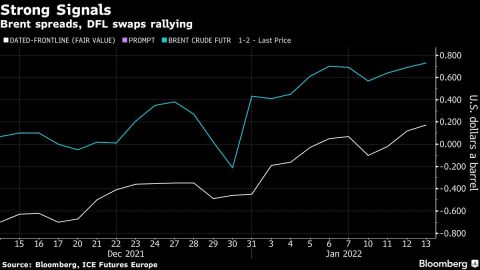 Refiners in China, South Korea and India are snapping up millions of barrels of more expensive light-sweet U.S. crude that’s due to arrive in April.

In Europe, traders are already paying hefty premiums to secure sweeter varieties that are easier to refine after Libyan supplies of such grades tightened on a spate of disruptions. Premiums for Forties, which often sets the regional Dated Brent benchmark, are at a two-year high. Ekofisk, another key benchmarking grade, is higher than at any time during the pandemic. In the U.S., North Dakota’s Bakken crude is trading at the strongest level in 20 months.

Libya was poised to restart oil exports from two key western ports earlier this week after militias ended a blockade of pipelines, but there have been disruptions to exports too.

But the strength appears to be stretching beyond the market for light, low sulfur barrels that are similar to Libya’s. Even Russia’s flagship Urals grade — which is higher in sulfur — is rallying too, and traders in Europe report strong demand across the continent.

Oil futures have climbed about 9% so far this year, fresh from its biggest annual gain since 2009 as the reopening of economies spurs global consumption despite the rapid spread of omicron.

The physical-market strength is mirrored in the futures market’s forward curve. The derivatives are in a pattern called backwardation where near-term prices command a premium to later ones.

Still, there’s plenty of risk that the bullish outlook is too optimistic. The virus is still casting a pall of uncertainty. China has locked down some cities and world’s largest importer is attempting to contain a resurgence of Covid-19 virus variants.

Back in 2020, the nation’s aggressive approach to combating the disease was a major contributor to global consumption weakening. So any significant restrictions this time around may yet hurt demand. There are multiple flight restrictions to fight omicron in different countries, and signs across Asia of thinning traffic, which would feed through into weaker prompt fuel demand.

Buying will also soon start to be affected by seasonal oil refinery maintenance, something that traditionally lowers demand.

Those concerns aren’t diminishing the physical traders’ longer-term views. At least for now.

Unipec, trading arm of China’s biggest state-owned oil refiner Sinopec Group, has been on a buying spree so far this month, grabbing cargoes from the Middle East to the U.S. and Brazil, according to traders participating in the market. Increased buying from major market players like Unipec, along with improved refining margins in the region have led to a more bullish sentiment, traders said.

Singapore’s complex refining margins were at $5.30 a barrel as of Thursday, compared with $3.20 a barrel at the start of last month, according to data from industry consultant FGE. The premium of Oman futures on the Dubai Mercantile Exchange versus Dubai swaps — often an indicator of the health of Asian spot market — rose to $2.15 a barrel Thursday from $1.46 a month ago.

Libya’s return will ease some of the market tightness for lower-sulfur crudes but it wouldn’t completely resolve the situation, said Christopher Haines, a global crude analyst at Energy Aspects Ltd.

“If you look fundamentally, there’s just not enough sweet crude around,” he said. “The only way this really slows down in the short term is if prices become prohibitive for refiners to run and they have to cut runs.”