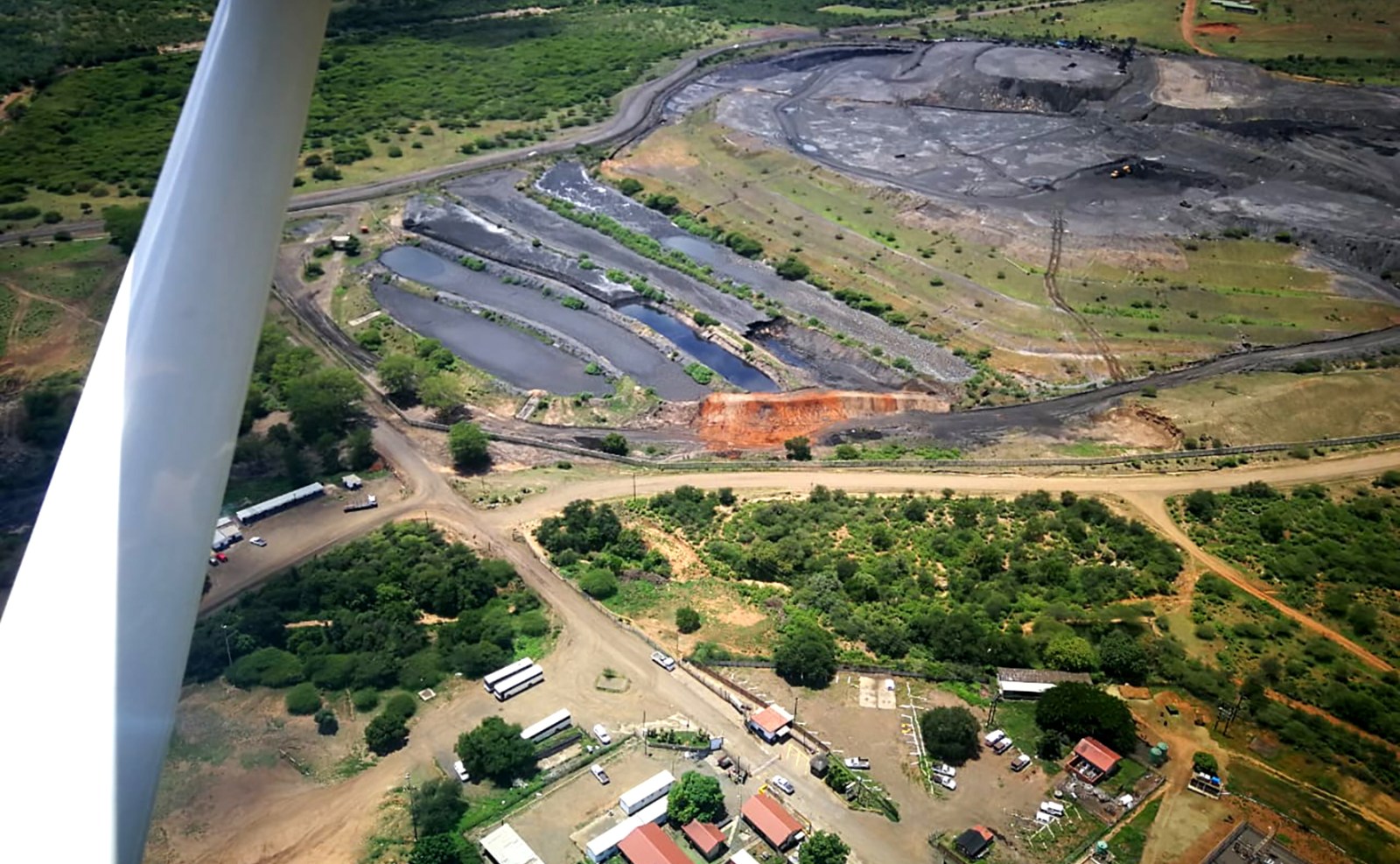 Inspectors from the Green Scorpions are visiting the Zululand Anthracite Colliery this week, hoping to shine a light on a 35-year legacy of environmental pollution and voluminous water consumption by one of the country’s largest anthracite coal suppliers.

A team of Environmental Management Inspectors (EMIs) from the national Department of Forestry, Fisheries and the Environment has been deployed to KwaZulu-Natal to boost a multi-department investigation into the collapse of a waste slurry dam at the Zululand Anthracite Colliery (ZAC) anthracite coal mine.

An estimated 1.5 million litres of liquid coal waste poured into the Black Umfolozi and White Umfolozi River system after the 24 December slurry leak, raising concern about the health of people, animals and the broader environment exposed to toxic and acidic wastes.

While the recent heavy rains have helped to dilute and disperse the pollution, the mining waste nevertheless contains a variety of several toxic heavy metals and chemical compounds that include mercury, manganese, arsenic, copper and lead.

Barbara Creecy, the Forestry, Fisheries and the Environment Minister, confirmed on Friday that her department had deployed a team of senior inspectors after she received a request for technical support from her provincial counterpart, KZN environment MEC Ravi Pillay.

“The team will support the ongoing efforts to address the impacts of the spill that is affecting rural communities and the Hluhluwe-iMfolozi Park as well as posing a risk to the iSimangaliso Wetland Park,” she said.

The mine, which opened in 1987, is located on the north-west boundary of the Hluhluwe-iMfolozi Park, one of Africa’s oldest game reserves and wilderness areas, and is surrounded by several subsistence farming communities that rely on rivers, streams and boreholes for human consumption and to water their livestock and crops.

Currently owned by the Menar group, which took over in 2016, the mine has previously been owned by BHP Billiton, Riversdale Mining and Rio Tinto. The land is owned by the Zulu monarch’s Ingonyama Trust, which receives royalties from several mineral operations across the province.

Over recent decades, the mine has come under fire from several community members, environmental groups and the provincial conservation agency (Ezemvelo KZN Wildlife) due to illegal mine expansion, pollution and the increasing volume of water consumption, especially during droughts and dry seasons.

ZAC paid a R497,000 fine in 2014 for operating three mine shafts illegally, some for nearly a decade. More recently, the SABC television programme 50/50 highlighted complaints by local communities about sinkholes, polluted water and claims that smaller rivers have dried up due to mining operations and water abstraction.

Last year, Ezemvelo also lodged a formal objection with the national Water Tribunal after ZAC was granted a new Water Use Licence, allowing it to open a new mining shaft barely 4km from the Hluhluwe-iMfolozi park boundary.

Complaining about the “untransparent and flawed public participation process” the conservation agency said critical recommendations and guidelines provided by Ezemvelo KZN Wildlife and other key organs of state appeared to have been ignored.

ZAC and its groundwater consultants also failed to demonstrate that the new Mngeni Adit would not harm water security of the Hluhluwe-iMfolozi Park and the iSimangaliso Wetland Park World Heritage Site.

“There is, we believe, evidence to demonstrate that ZAC is polluting both ground and surface water and possibly adversely impacting on the ecological reserve of the Black Umfolozi River,” Ezemvelo Conservation Services head Joe Phadima said in a letter to the Water Tribunal.

He said ZAC’s “poor track record in adhering to licence conditions” should also not have been overlooked by the Department of Water and Sanitation (DWS).

“The National Water Act grants a water right to both people in terms of a ‘basic human needs reserve’, and to the environment – the ‘ecological reserve’. The DWS cannot issue a water licence to a mine [or alter an existing one] without providing for and ensuring the adequacy of the reserve.”

While the current mine owners boast about providing piped drinking water for livestock and human consumption at “23 communal taps, at a rate of 2,5 million litres per month” this volume appears to be a small fraction of the water extracted every month from the Black Umfolozi River and boreholes for coal-washing, dust suppression and other mine operations at ZAC.

While Our Burning Planet has not been able to establish the current volumes of river and groundwater used by ZAC every month, it is understood that the mine’s water use licence allows it to extract 519,000m3/year of water from the Black Umfolozi (equating to more than 43 million litres per month).

Further, according to a new water use licence granted by senior DWS official Trevor Balzer in 2020, ZAC will be permitted to extract another 365,000m3 (365 million litres) from groundwater resources annually for the new Mngeni mine shaft.

The new water-use licence also makes it clear that ZAC is legally obliged to provide potable water to local communities and other users in compensation for water used by the mine.

For the Green Scorpions team currently visiting the ZAC mine, the immediate focus is likely to be on the most recent pollution plume; the underlying reason for the failure of the slurry dam – and also whether ZAC’s pollution control dams have been lined with an impervious layer to prevent groundwater being contaminated.

According to the Menar website, ZAC inherited a situation where most of the mine’s 28 pollution control dams (PCDs) were unlined and it would cost an estimated R90-million to rectify this.

“The purpose of a lining system in a PCD is to minimise leakage of polluted water from the dam that could result in contamination of groundwater resources. This is something that previous owners of ZAC should have done, but the burden and cost of lining now falls on us and as a responsible mining company, we are committed to fulfilling our obligations in this regard,” said ZAC.

It is not clear what progress Menar has made in rectifying the historical legacy of pollution from unlined control dams by previous owners, but in response to questions from Our Burning Planet, ZAC confirmed the slurry that spilled into local rivers last month was likely to contain carbon, antimony, arsenic, barium, cadmium, chrome, cobalt, copper, lead, manganese, mercury, molybdenum, nickel, selenium, vanadium and zinc.

The company said samples from several groundwater pollution monitoring points had been collected and further samples would be collected further downstream towards the Lake St Lucia estuary.

ZAC confirmed that it had not erected any signboards in affected areas to warn people about the potential risks of drinking or using water and soil contaminated by the spill. It said, “Community leaders were briefed on the 24th, 25th, 26th, and 28th December 2021, and 3rd and 6th January 2022. Community leaders provide feedback to communities.”

On whether ZAC believed the dam failure was due to heavy rains or faults in the design or maintenance of the slurry dam wall, ZAC said: “An engineering firm has been appointed to confirm the exact root cause of the failure of the dam wall. This investigation is currently in process.”

The company did not respond directly to queries on whether its slurry dams had sufficient freeboard volume to contain the extra water expected during the summer rainfall season, simply stating: “The dams are operated on a decant system. Highest dam decants into lower dam in a cascading system. One dam is always in a process of being cleaned to generate new capacity. This has been the system in operation at ZAC during all the seasons including the summer rainfall season.”

Creecy said the team from her department will provide on-the-ground support and assistance to the joint operations committee, which is made up of government roleplayers, including the Department of Mineral Resources and Energy, the Department of Water and Sanitation, the KZN Department of Economic Development, Tourism and Environmental Affairs and Ezemvelo KZN Wildlife. DM/OBP