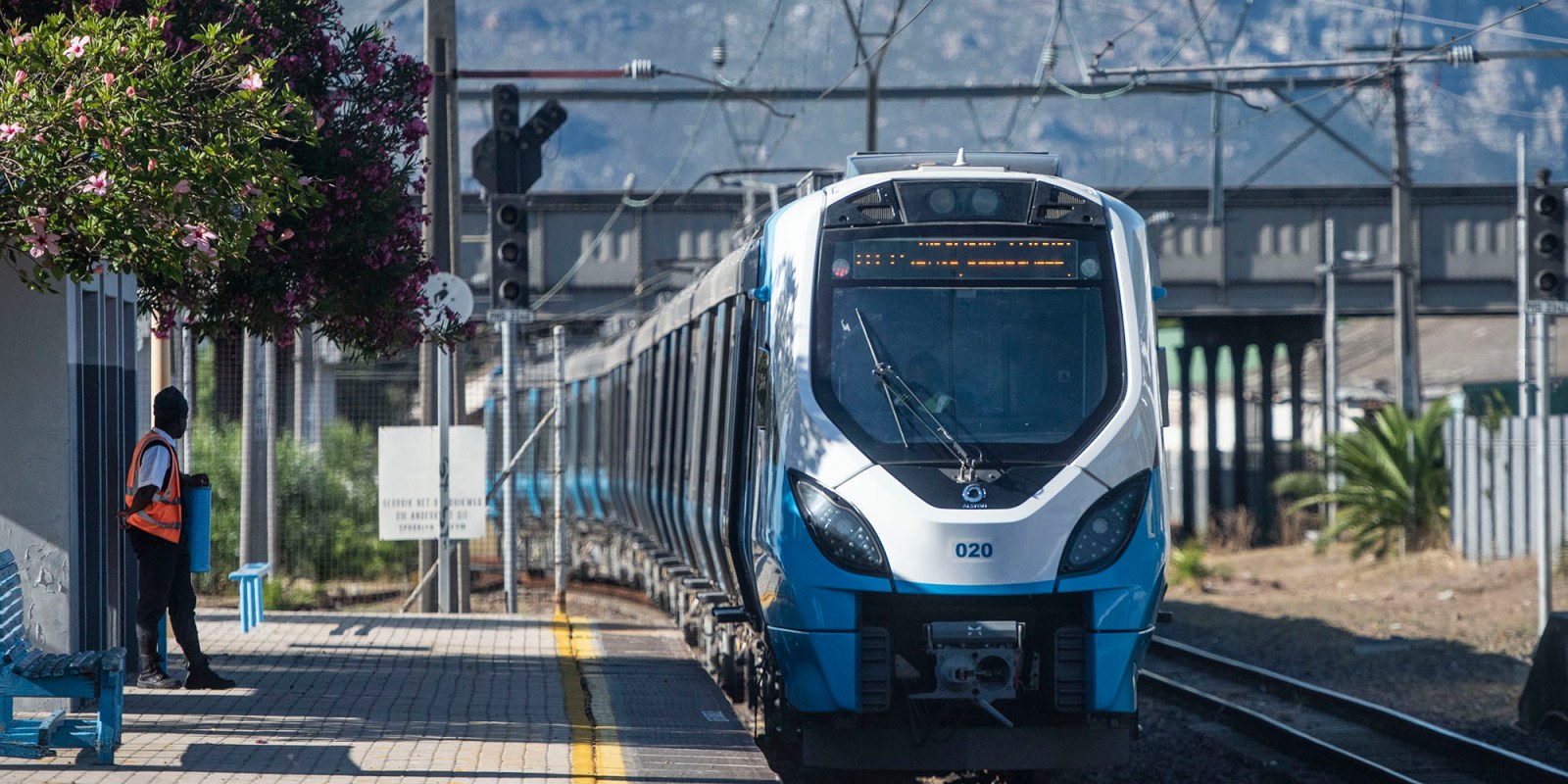 The new People's Train from Prasa, which will replace the older, yellow trains as part of the rail agency's modernisation project, on 17 January 2022. (Photo: Brenton Geach)

Transport Minister Fikile Mbalula has said that things need to get moving in fixing the Passenger Rail Agency of South Africa (Prasa). This comes as Prasa prepares to complete refurbishments to vandalised and neglected stations in Cape Town’s northern suburbs.

For the first time in two years, Cape Town commuters will see trains running from Cape Town to Bellville from March, according to Transport Minister Fikile Mbalula. During a media briefing on Monday, the minister said the service would operate at newly upgraded stations along the Cape’s Northern Line.

Along with a contingent of department officials, Prasa executives, Western Cape Transport MEC Daylin Mitchell and City of Cape Town mayco member Roberto Quintas, Mbalula took a ride on the “People’s Train” between Cape Town and Claremont before visiting upgraded stations further along the line.

The Northern Line consists of 34 stations, covering towns such as Worcester. The line to Bellville has been closed since the start of South Africa’s lockdown as a result of vandalism and infrastructure theft.

“The resumption of services on the Cape Town to Bellville and Cape Town via Pinelands line is scheduled for March 2022,” said Mbalula.

Speaking to reporters, Mbalula said “the vast majority of stations on the Northern Line are in a fair condition and this corridor has been a focus of Prasa’s station improvement programme”. However, out of 34 stations in the north, five suffered “extensive vandalism”. with Parow, Firgrove, Fisantekraal, Faure and Koelenhof stations being in a “bad state of repair”.

Before the briefing, Mbalula visited Vasco and Tygerberg stations to inspect these facilities, which have recently been refurbished. Vasco station in Goodwood has been refurbished to the tune of R12.3-million and is 95% complete. According to Mbalula, the ramps at the station still need to be built for people with disabilities.

Tygerberg station in Parow is 95% completed, with R10.1-million spent on the project. Other stations on the Northern Line that are still being repaired include Elsies River, Ysterplaat and Thornton. Athlone and Maitland stations remained a matter for concern, said Mbalula.

The return of a commuter rail service, according to Mbalula, is about the “repositioning of commuter rail as the backbone of our public transport system”.

Mbalula also spoke about the need to fix issues at Prasa.

The agency and the infrastructure under its control were devastated by corruption, looting and vandalism during the State Capture years. Prasa featured prominently in testimony at the Zondo Commission.

Mbalula said now was the time to sort out how Prasa is spending its budgets and get the agency’s capacity in order.

Mbalula said he intends looking at other transport department agencies, such as the Airports Company South Africa and Sanral, to help capacitate Prasa. He said details of these efforts would be announced by the end of the week.

Mbalula hopes to “to get things moving” by increasing the speed at which projects are implemented, as well as addressing Prasa’s financial situation and irregularities in the system.

Mbalula said he would be in Tshwane on Wednesday to inspect refurbishments on the Mabopane line. DM