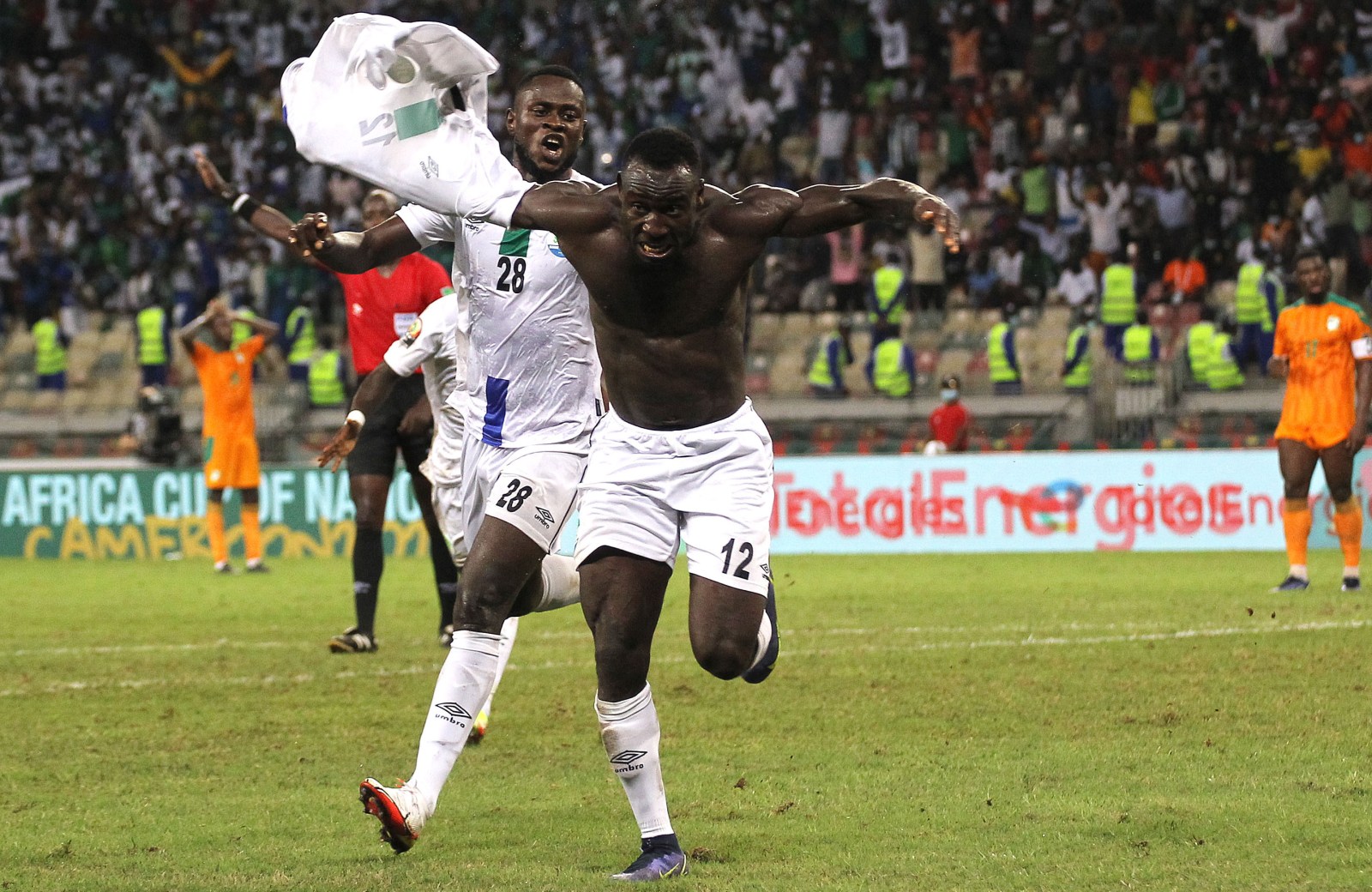 Alhaji Kamara of Sierra Leone celebrates scoring the equaliser in the final minutes of their 2021 Africa Cup of Nations clash with Ivory Coast at Japoma Stadium in Douala, Cameroon on 16 January 2022 (©Shaun Roy/BackpagePix)

It was a memorable moment for minnows Equatorial Guinea as they ended Algeria’s 35-match unbeaten run.

Group E in the Africa Cup of Nations (Afcon) is wide open after both the heavyweights in the group were victims of shock results on Sunday evening.

Algeria were 1-0 losers against Equatorial Guinea, while Sierra Leone equalised at the 11th hour to deny two-time champions Ivory Coast all three points during a two-all draw.

Algeria, the reigning African champions, were cut down to size by a resilient Equatorial Guinea side thanks to a 70th minute strike by Esteban Obiang Obono.

Obiang guided his effort past Raïs Mbolhi to beat the defending champions and in the process end their impressive 35-match unbeaten run, which stretched back to 2018.

The surprising Group E result leaves Algeria bottom of the standings and needing a win in their last group game against the Ivory Coast on Thursday to stand any chance of advancing.

Equatorial Guinea now have a chance to win the group when they face Sierra Leone in their final game. They have three points, one behind the leaders, Ivory Coast, who were frustrated by Sierra Leone during a mouthwatering 2-2 draw. The result leaves the Leone Stars on two points, while Algeria have just a solitary point.

“I am delighted with this victory against a great and beautiful team from Algeria. It was not an easy match but we managed to build our victory, said Nzalang Nacional’s coach Juan Obiang following his side’s priceless victory.

“The qualification for the next round is not yet acquired and tomorrow we will prepare ourselves for the match against Sierra Leone. The objective is to get a very good result.”

His opposite number, Djamel Belmadi, lamented the reigning champions’ rotten luck, with his star-studded team featuring the likes of Riyad Mahrez and former Leicester City forward Islam Slimani not rising to the occasion.

“It’s not the expected result and yet we did everything; we got several chances but the ball did not go in,” said Belmadi.

“We are in a situation of failure, it is a lean moment… We will fight to stay in this competition. It will be against a great team from Ivory Coast which is made up of players playing in the biggest leagues. Regarding the opponent, Equatorial Guinea, they defended with a lot of desire, determination, and we couldn’t find the opening, it’s a situation of failure.”

Algeria’s next opponents, Ivory Coast, could not finish the job against a spirited Sierra Leone despite extended periods of dominance by their lethal attack led by Ajax Amsterdam sharpshooter Sébastien Haller, as well as Premier League dribbling wizards Wilfried Zaha and Nicolas Pépé.

The Elephants were only two minutes away from bagging maximum points, but the Leone Stars capitalised on goalkeeper Badra Ali Sangaré’s error and made it 2-2 through substitute Alhaji Kamara.

“Our dressing room remained silent, heads are low, we just gave two points, as a gift. What can be done in terms of organisation on this second goal, I still do not understand what happened, I continue to search. It is also the charm of the Africa Cup of Nations,” said the Elephants’ coach Patrice Beaumelle.

“On the other hand, we must continue to work to improve our efficiency with 18 chances, it was enough to score 30% to take cover.”

Musa Barrow scored a late penalty to give Gambia a deserved 1-1 draw against Mali in Group F. The Malians had grabbed the lead through a Ibrahima Koné penalty. The result leaves both teams level on four points with one more game to play.

Tunisia boosted their chances of reaching the round of 16 after an emphatic 4-0 win over Mauritania. The Carthage Eagles dominated the game, led by Wahbi Khazri who produced a brilliant performance and scored a brace for his country to earn them their first points of the tournament.

In Group D, talisman and captain Mohamed Salah scored the lone goal to hand Egypt their first points of the tournament following a disappointing defeat to Nigeria in their opening match.

The Nigerians meanwhile booked their spot in the knockout phase with a comfortable 3-1 win over Sudan. Goals for the Super Eagles came from Samuel Chukwueze, Taiwo Awoniyi and man of the match Simon Moses. DM