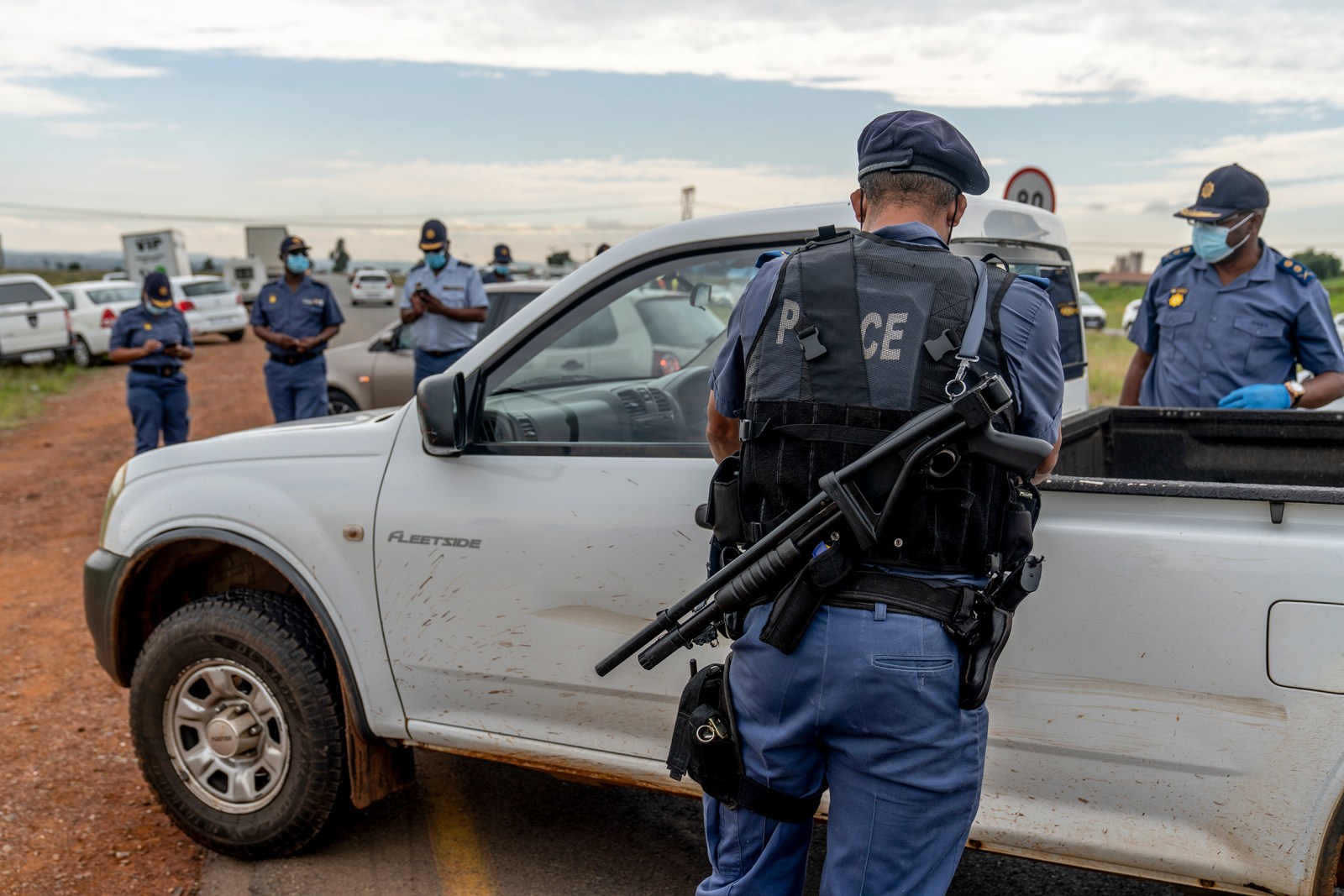 Police about to search a van on the N12 Highway roadblock on the West Rand on 13 January 2022. (Photo: Shiraaz Mohamed)

An illegal gold refinery was shut down and 211 people were arrested for various crimes, including murder, during Operation Okae Molao in Westonaria last week.

Traffic was backed up for several hundred metres on both sides of the N12 Highway outside Westonaria as the long arm of Operation Okae Molao, led by Gauteng Police Commissioner Lieutenant-General Elias Mawela, stretched across the West Rand on Thursday. Mawela and his team were joined by several other law enforcement agencies, including immigration officers from the Department of Home Affairs.

Traffic cones were set up to designate parking bays for motorists pulled over during the operation. Vehicles were searched for drugs, illegal weapons and other items.

“We want drugs, weapons and stolen cars. Watch out for the Polos,” barked an officer over a loudhailer as he instructed cops on what to look out for.

The police searches were meticulous. Some officers hunched over bonnets checking vehicles for signs of identification having been tampered with. A Tracker official lay beneath a Ford Ranger as he checked its Vehicle Identification Number (VIN) while a cop lay on his back as he stripped several panels from a VW Polo.

Police concluded that the latter car was suspected of being stolen and said it belonged to a member of the SAPS.

Fifty-four undocumented immigrants were arrested and filled several police vans parked along the highway. Among them was a man in possession of a police reflector vest who was charged with impersonating a police officer.

From inside a van, a man protested that his documents were in order and asked to speak to an immigration official. He presented his Zimbabwean passport to the official, who acknowledged that it was in order. But he remained in the van.

“He won’t be let out now. They will only let him go at the charge office,” said a policeman standing watch.

An undocumented immigrant complained that the police presence was just “a show” and asked: “Is the police commissioner here? Why are we being arrested?” He said cops did not usually bother them.

Several kilometres away, on a smallholding near Randfontein, police pounced on an illegal gold refinery. They described this bust as the highlight of the operation. Drums of carbon stood in a warehouse. Carbon is used in the process of refining gold and is said to increase yield. Nearby stood various bits of equipment used in the processing of the precious metal.

“Check the car, it might be stolen,” said an officer. A Toyota Yaris stood in the warehouse and an officer checked the licence disk using his cellphone. Satisfied the car was not stolen, the team moved to another warehouse, also used in illegal gold mining.

Said Mawela after the bust: “This is on another level. It’s not a level one type of operation where you find an operator digging. This is a level three to level five operation. This place has been monitored for a very long time. They are running a parallel business with a legitimate mining business.” One suspect was arrested.

In another raid, on a stolen-car “chop shop” in Westonaria, a street was cordoned off with police tape. A police flatbed tow truck was waiting. Vehicle body parts were stripped off as stolen cars were loaded on the truck. Three suspects were arrested. One covered his face with his palms to avoid the cameras and tears filled his eyes as he was led to a police van.

Said Mawela: “They found a lot of stolen vehicles that are being chopped down into pieces so that they can sell the parts. All these are exhibits of parts removed from the stolen vehicles. I think we did very well. All these activities you see today are part of Operation Okae Molao.”

A neighbouring panel-beating shop was also searched, but no arrests were made there.

At Westonaria Police Station, cops stood around a table covered in Mandrax tablets seized in an earlier raid. Explained Mawela: “This is another phase of the team, which was assembled for drugs. This was an intelligence-led operation. The team went to a certain address in Venterspost where they recovered 3,552 Mandrax tablets and arrested three suspects.”

Mawela attributed the success of the seizure to police intelligence operations and spoke of the scourge of drug addiction in Gauteng.

“For us, to remove this little bit of drugs from the streets, surely it will have an impact on substance abuse, which we are observing on a day-to-day basis.”

He concluded: “Congratulations to all the teams that we have deployed today. I think they have done extremely well. None of them came back empty handed.” DM