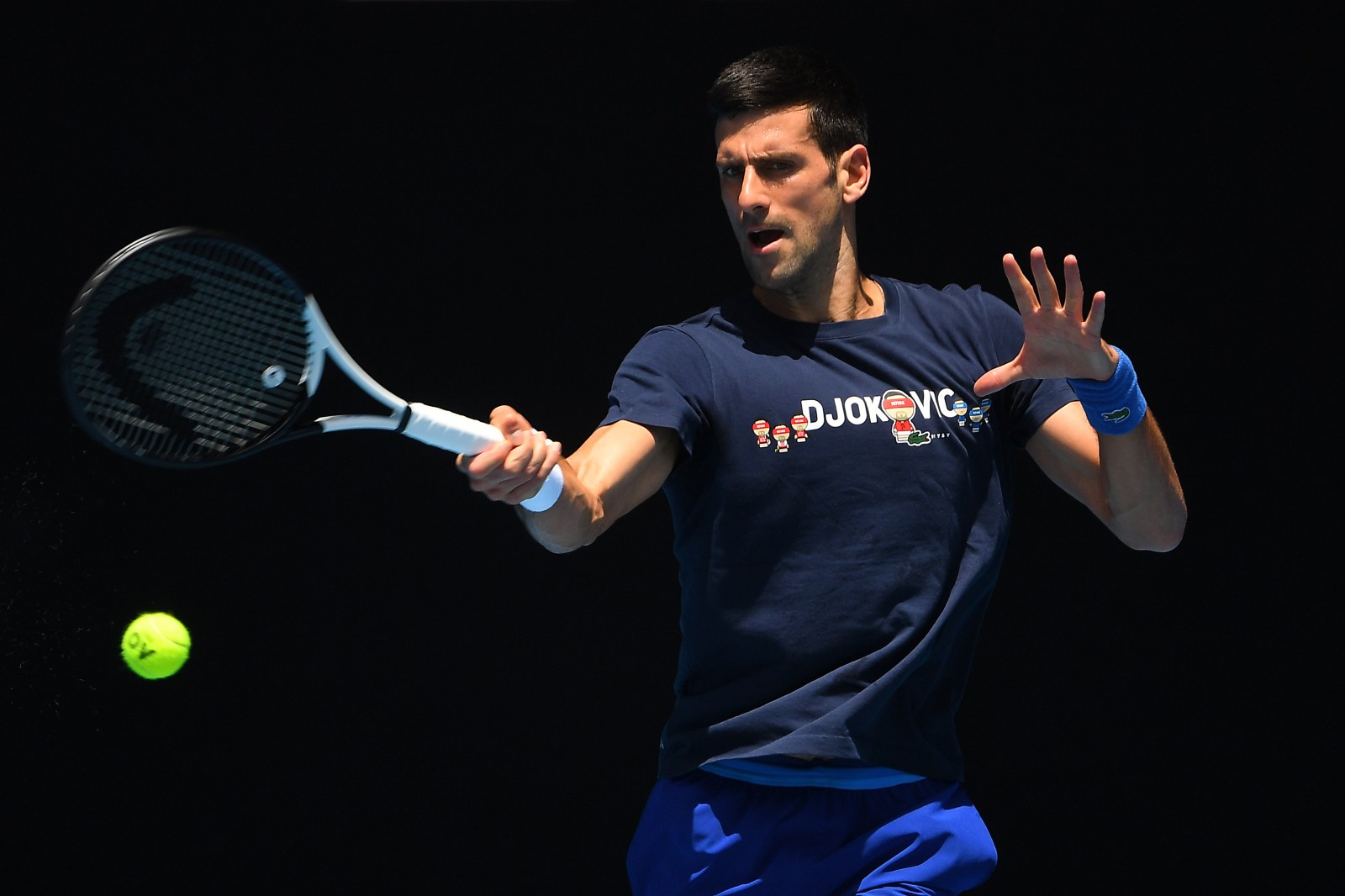 Novak Djokovic of Serbia during a training session at Melbourne Park in Melbourne, Australia, on 12 January 2022. (Photo: EPA-EFE / JAMES ROSS)

Regardless of your thoughts on Novak Djokovic and which corner you stand in about his apparent lack of awareness about his 'medical exemption' to play in the Australian Open, the one obvious theme is that this is a man who will go to any lengths to win.

The greatest athletes all share an insatiable and selfish winning mentality, often at any cost. Clearly, in the saga surrounding Djokovic’s presence in Melbourne, where he hopes to compete for a tenth Australian Open singles title, he has taken the view that any amount of reputational damage is worth a tilt at glory.

He is on a quest to surpass archrivals Rafa Nadal and Roger Federer for the most singles majors in a career. The trio are all on 20 but only Nadal is in Melbourne, and Federer is recuperating from yet another knee injury setback.

At 34 and with a battalion of emerging stars already snapping at his racquet strings, Djokovic knows that time and opportunities to win a 21st Grand Slam, and beyond, are running out. As brilliant as he is on the court, he cannot keep the pack at bay forever.

He has never publicly stated it, but given his competitiveness and desire, the Serbian has probably set himself a goal of 25 Grand Slam singles titles.

That would make him statistically the most successful player of all-time, surpassing Margaret Court, who won 24 singles Grand Slams in the women’s section.

With that thought in mind, it’s obvious that Melbourne and the Australian Open represents Djokovic’s best path to 25 Grand Slams. With an entire city and country – if polls taken in Australia are to be believed –against him, Djokovic remained unmoved by public sentiment.

The only assumption to be made from his behaviour is that his desire to win, to use the Australian Open as a path to his own personal glory, is worth every bit of hate and anger levelled against him.

Obviously, most of his fellow countrymen believe he is a victim in this, but really, all he had to do was be vaccinated and none of this furore would have occurred.

A Newscorp survey found that 83% of Australian residents wanted Djokovic to be deported, and on 14 January their wishes appeared close to being granted.

Australian Immigration Minister Alex Hawke used his discretionary powers to cancel Djokovic’s visa for a second time because he appeared to lie (make a mistake?) on his visa application and break Covid safety rules before entering Australia.

“Today I exercised my power under section 133C(3) of the Migration Act to cancel the visa held by Mr Novak Djokovic on health and good order grounds, on the basis that it was in the public interest to do so,” Hawke said in a statement.

“In making this decision, I carefully considered information provided to me by the Department of Home Affairs, the Australian Border Force and Mr Djokovic.

“The Morrison Government is firmly committed to protecting Australia’s borders, particularly in relation to the Covid-19 pandemic,” he said.

Djokovic is not vaccinated and is a vaccination sceptic, rather than a full-blown anti-vaxxer. But the difference is marginal.

For a man in his position of influence and privilege, the act of not doing something, such as being vaccinated, is as good as screaming anti-vax sentiments on his social media platforms.

Djokovic, of course, has the right not to be vaccinated but with that choice comes consequences. Australia has clear and strict vaccination policies and Djokovic tried to bend the rules so he could have his cake and eat it.

And for a while it seemed it would work. Tennis Australia and the Victorian government issued him with a travel visa with a medical exemption allowing him to enter Australia unvaccinated. Because he tested positive for Covid on 16 December last year, that was apparently grounds enough to waive a vaccination.

Yet it wasn’t, according to Australia’s federal government and he was detained in an immigration hotel on 6 January and his visa cancelled. At that point he might have gone, ‘ah bugger it, let me out of here’.

But Djokovic is not one of the greatest tennis players of all time because he backs down from adversity. This is a man who, after all, spent his formative years in war-torn Belgrade. Fighting is ingrained in his psyche.

He spent four days in an immigration hotel and fought to have his visa reinstated as public anger in Australia mounted against him. He won the first round of the legal battle and on 10 January was “released” with a legal visa to continue his stay in Melbourne and his quest for tennis history.

That quest, at the time of publishing, remained stalled though after Hawke used his discretionary powers to revoke the visa once more. Hawke’s decision was no doubt influenced by public sentiment against Djokovic, but also by an emerging list of evidence of breaches of protocols.

Another terrifying prospect also looms for the Serbian. He could still be banned from applying for an Australian visa for a further three years following this debacle, which would rob him of time and opportunities to extend his Grand Slam record run.

More than heckling, booing and social media hate, that would be a bitter blow. Djokovic has made it clear he will fight to stay in Australia and compete. He is many things – tone-deaf, obstinate and entitled among them – but he is also obsessively driven to win.

In his world view, paying just about any price is worth adding another W to his glowing record. DM168

TIMELINE OF THE CONTROVERSY

December 16: Djokovic tested positive for coronavirus, according to his affidavit to the Australian federal court.

December 17: He said he attended a charity event in Belgrade and social media posts show him maskless, handing out awards to kids.

December 30: Tennis Australia informed him that he was granted a temporary medical exemption from the country’s vaccine requirements on the grounds of previous infection. In a letter dated 30 December, Australian Open organisers said this was granted by a panel of medical experts and reviewed by the state government of Victoria, where the tournament is held.

January 1: Djokovic told his agent to fill out his travel declaration to enter Australia. The declaration stated that he had not travelled in the 14 days prior to his expected departure from Spain on 4 January. The player later admitted the immigration form had contained an error in not saying he had travelled between Serbia and Spain in the 14 days before he departed.

January 2: Djokovic was issued with a border travel permit by the Victorian government.

January 5: Djokovic touched down at Melbourne’s Tullamarine airport at 11.30pm.

January 6: Australia’s Border Force detained the tennis star in a room at the airport overnight, denying him permission to enter the country and notifying him of their intention to remove him. The Serbian president objected to Canberra.

January 7: Djokovic faced 72 hours over the Orthodox Christmas holed up in a hotel for asylum seekers after a court agreed to hear his appeal against his cancelled visa.

January 10: Djokovic was freed from detention. A judge quashed the government’s decision to cancel his visa on the grounds that  it was unreasonable.

January 11: Social media posts and eyewitness accounts to Reuters contradicted Djokovic’s immigration form declaration that he did not travel for 14 days before entering the country.

January 12: Djokovic posted a statement on Instagram apologising for the mistake on the form and for leaving quarantine to do a photoshoot with L’Equipe.

January 13: He was included in the Australian Open draw. The government was still considering whether to cancel his visa.