What Richard Griffin Did Next: A buffet for artists in cool Westdene 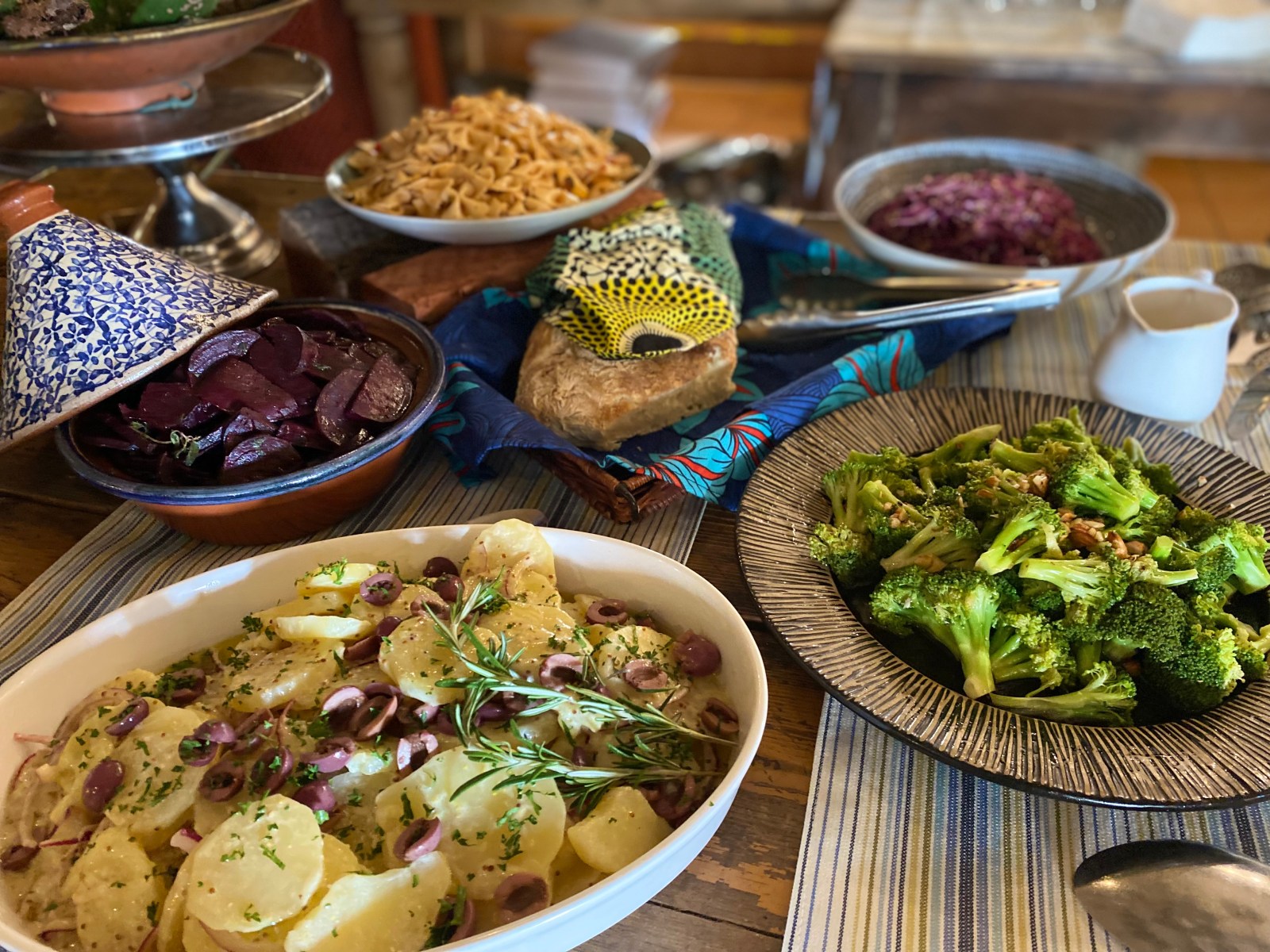 A section of the buffet set out on a long table, much of it vegetarian, some for carnivores and some for vegans. (Photo: Supplied)

At Emzini, R20 of your buffet plate goes to ‘I’m 4 The Arts’, whether you’re an artist or not. Arts workers get a discount on their buffet bill as well.

Richard Griffin is for community. All for it. He’s picked one of the most community conscious Jozi areas in which to open Emzini. And Emzini is very Richard Griffin, who is for local hearts and the arts, and for those who support the arts, and this is the yummiest way of doing it.

The Emzini buffet, presented every day between 12 and two, is known as the arts buffet. It’s a wonderful way of supporting those arts projects, those arts actions taken against corrupt arts administrators, and helping those arts people who are not otherwise supported, many of whom are from this and the surrounding communities. The people of the arts were a sector of society neglected during the pandemic.

I thought I was for the Emzini buffet today but I’ve picked the one day it’s not laid out in its culinary glory on a long table in the farm style “kitchen room”. It was the 29th of December. And Richard had guessed no one would be coming for it that day but I didn’t know that. So went along, having asked Bridget too.

I’ve seen this food buffet. On it is often a great chicken pie, Janet Telian’s famous tomato tart, a nutty and cheesy aubergine roulade, excitingly filled bowls, platters and always salads of great content and interest. I know the super quality of the chef responsible for the buffet but it can’t be helped that I am not going to have any of the food from there today. It’s not as though the menu food isn’t as lovely anyway. The chef, I’m to discover, often references other chefs: Telian, Jackie Cameron and Karen Dudley. However, Emzini’s buffet has something else that’s special about it that I’ll get to.

Westdene is known as a home for artists of many kinds and those who work in arts-related jobs. There are camera people, scriptwriters, wardrobe people, musos, promoters, agents, actresses, actors galore that I can think of. There are no doubt many more people here and in the surrounds, in support roles, the people who make productions happen in all their detail, that light them, engineer them, edit them, clean up before, during and after them. In fact, I do know that.

Westdene I also know for being the place whose community purposely turned their walls over to graffiti writers, resulting in visitors coming here to tour the area’s ever-growing art collection. Westdene’s own community consists of many walkers of life, remarkably different walkers, who get stuff done, together, exemplarily, no matter how different in ages, sexes, religions, histories, incomes and outcomes.

Richard Griffin has this welcoming food place, Emzini, a place for them all.

Judging by today, all of them like sitting on this wide and comfortable stoep. The councillor for Westdene seemingly does, with her team, as does a woman I keep seeing in TV ads, with people who look like relatives, inter alia. I like sitting out here too and have done so, even when this restaurant was a Portuguese style place called Tasca do Sol. People ate garlic or piri piri prawns here and, though the other eating wasn’t always madly exciting, there was wine and there was and is Westdene Dam over the road. The dam is filled by Westdene Spruit just above it, a tributary of Jozi’s Braamfontein Spruit.

Its grass is holidays-longish today. The wide surround of gently drooping trees look blessedly cool and the water satiny.

The restaurant building fell into a bit of disrepair a decade or so ago, sadly, given its great location and then suddenly there was a Polish guy with his national flag who marched around neatly in boots and what looked like a Polska military outfit. I know a few merry Poles but I still didn’t feel drawn to eat or drink here then.

Now I’m lounging outside on this hot day with a cold Ken Forrester sauvignon blanc and a friend who lives in Westdene. I asked her here especially because of that and, funnily enough, because of the buffet that’s missing today. We’ll order off the menu instead.

Bridget van Oerle promotes the arts and artists. I first met her with Pieter-Dirk Uys at De La Creme in Melville, the same cafe he’d return to whenever he was up from Darling. He used to live in Melville.

I look around me, astonished and amused at the changes wrought here. It’s now quirky, comfy, farmhousy in parts, bordello-ish in others, with nooks, rumination spots, happy-friends-and-family tables, deep sofas, even a TV screen in a far corner of the stoep.

Richard Griffin may well hold a record for having worked in the most restaurant kitchens in the world, some of them his own. He says he’s “always been in food”. At 13, he ran away from home, a perfectly nice one with nice parents in it, who later became business partners in his endeavours. He was “a nightmare child” and went to work in a kitchen, for comfort. “Kitchens saved me. I can express ideas and feel safe in kitchens.” That first one was Jonkershuis at Groot Constantia.

At 17, Richard was overseas, starting a career in food as a chef. Over more than the following decade, he worked over various continents. I counted four as we went, during our conversation. He worked the extremes of La Vendôme and gutsy, shady little places. At 30, he was accepted by the Cordon Bleu in England and qualified. “I fell in love and came here,” Richard says, waving in the whole of South Africa.

When did he turn into the restaurant host who is also the chef? Because, along his many-studded chef route, Richard realised that having a restaurant was more about making people feel at home and that some of the tricks are warm service and, funnily, décor. Lighting is key and so are remarkable “things” to inspire comment and conversation.

It won’t be a surprise for many to know that Richard started, ran and head-cheffed Madame Zingara, the fantastic event in a fabulously mirrored circus tent. It was all about hospitality.

I only appreciated that after I was invited to a show in the Cape Town days. I’d demurred, saying it “wasn’t me”. The boyfriend at the time said, “Oh puhlease! You may as well come for the food. That’s you.”

It was an evening full of welcome and happiness. There were four or so courses of comfort-style food with terrifically cheffy touches and surprises. Oddly, I particularly remember a dish I didn’t have. I did taste it. The boyfriend had chocolate chilli steak. It was no silly faddish plate, of excellent meat, fillet. The spiked chocolate in the sauce was fine Belgian and black, as dark as the mushrooms, soft as opposed to little crispy pieces of potato or pasta, with radicchio or other bitter leaves. That dish led me to make turkey and rabbit dishes with black chocolate, emulating the rich offset of umami that I’d tasted, delivered by the mushrooms and meat.

I am not surprised today that people, talking about Madame Zingara, remember that dish from among all the others, like a popular calamari one and a salmon and lemon aïoli too. When I compare Richard Griffin’s food as observed, just not today, on the buffet table at Emzini, I recognise the unscary comfort food bases, flourished with casual professionalism and little taste or ingredient surprises.

Instead of that buffet, today Bridget and I get a pizza, fresh from the wood-fired oven. Yes, I know, I should never have said I seldom eat them. Anyway, this isn’t that stringy-stodgy type and it is topped with artichokes and Gorgonzola, a flurry of fresh and piquant herbs from the garden. Of course it’s wonderful. We have a little helping of calamari as well, a constant Griffin fave, and one which reminds me that chef Richard makes the best reconstructed squid dish I’ve ever seen.

He likes to cook with as-local-as-can-be stuff, and decorate with very local stuff. Our salad proves everything culinary I’m saying about our host-chef.

Bridget van Oerle, lunching with me, is, of course, involved with I’m 4 The Arts, along with her other arts work. The NPO was started by opera and indigenous jazz doyenne Sibongile Mngoma in 2020 and registered last year.

Some days later, clued-up Jozi friend Kennedy Welani Tembo lets me know about a great place he’s discovered called Emzini. I say I got there before him for a change and ask what he enjoyed most there.

“The ambience,” he replies. And we in Jozi can eat for the arts now, while we enjoy it too. DM/TGIFood