THIS LAND IS OURS 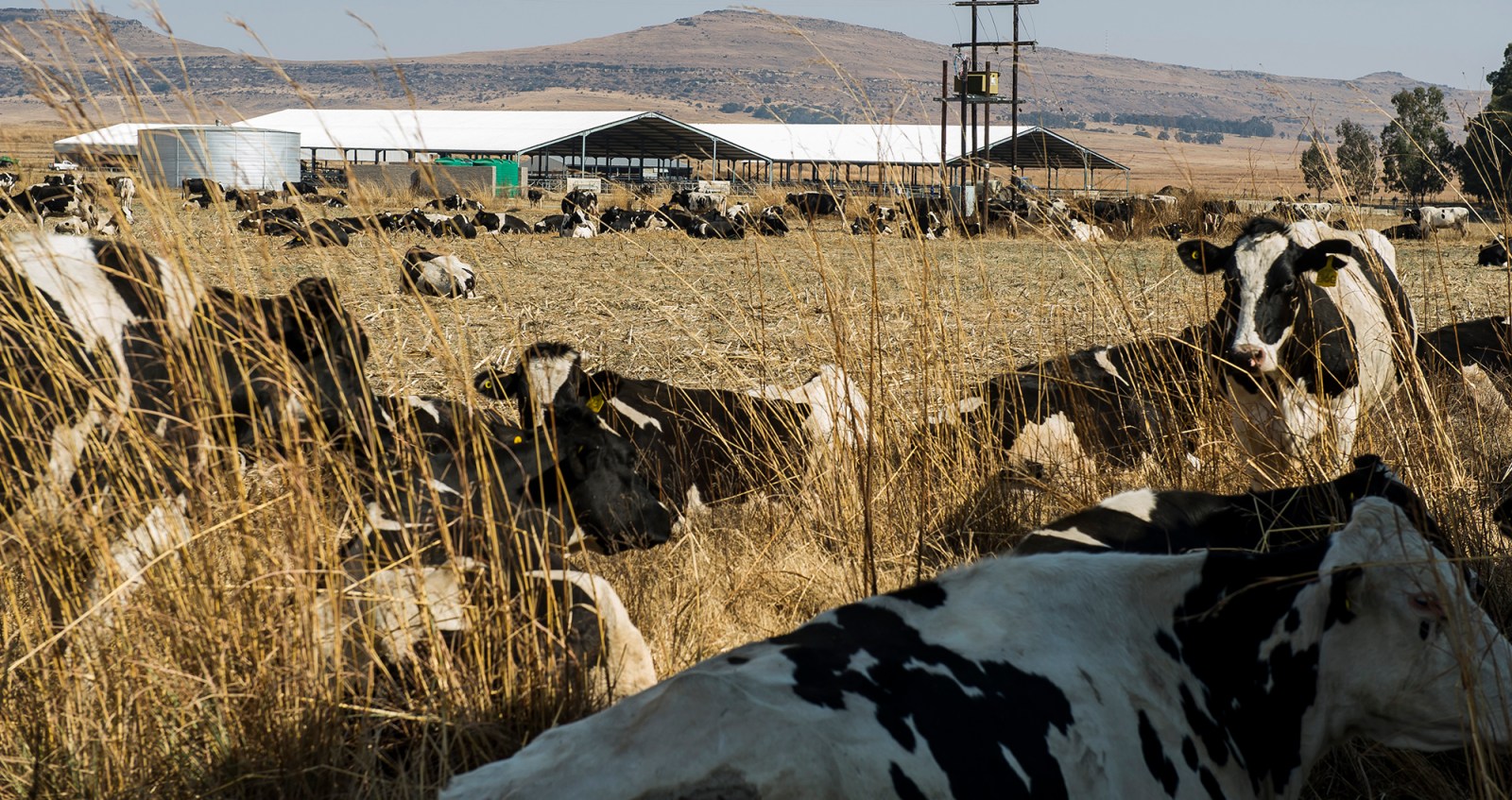 Cows at the Estina dairy farm project during Democratic Alliance (DA) leader Mmusi Maimane’s visit on July 12, 2017 in Vrede, South Africa. The farm, which was a joint private-public project between the Free State Department of Agriculture and Gupta-controlled Company, Estina is now in the midst of controversy after allegations of corruption and money laundering by the Gupta family emerged. (Photo by Gallo Images / Rapport / Deon Raath)

On Friday, 14 January 2022 nearly a decade after the project started, the Premier of the Free State, Sisi Ntombela, led the official handover of the Vrede Dairy Integrated Farm Project to the 65 verified beneficiaries, in Vrede in the Free State.

The handover was in line with Public Protector Busisiwe Mkhwebane’s recommendations in December 2020, after a report into allegations of maladministration in the Free State Department of Agriculture’s Vrede Integrated Dairy Project in 2017/18.

Daily Maverick previously reported that, “Free State DA leader Roy Jankielsohn laid the original complaint about the Vrede Dairy Farm in 2013 after becoming concerned about the high government investment in the project of R342-million – and the ‘confidentiality clause’ that protected the details of its partnership with the Gupta-owned firm Estina.”

Addressing members of the Free State legislature, executive council and mayors, and farmers and community members from the area, Ntombela said, “Today as I am standing here, I am grateful that we have the rightful owners of the project taking over the management and the implementation of this project.”

The project was established in 2012, by the provincial Department of Agriculture and Rural Development (DARD), to empower black farmers with the knowledge and skills of operating a successful dairy farming enterprise, which would contribute to the local economy and improve the livelihoods of its communities.

However, the local community didn’t end up benefitting from this project, as they should have.

Instead, “implementing agents” (third parties who take on projects on behalf of the provincial department) were awarded large contracts by the Free State DARD (during Ace Magashule’s tenure), which saw between R250-million and R340-million siphoned out of the local empowerment programme into the bank accounts of Gupta-owned companies and their associates.

The Free State government announced on 12 January that the handover of the project would be taking place in accordance with a high court order issued on 17 January 2019. The court had given the government exactly two years to conclude the handover.

“This historic day reminds me of June 1955, as 3,000 people gathered in Kliptown to adopt a very important document which became famously known as the Freedom Charter,” said Ntombela during the handover. “One of the tenets of that document is: The Land Shall be Shared Among Those Who Work It. “The struggle for land and resources is continuing, as expressed in the Freedom Charter. What our government is doing today is indeed a step in the right direction.”

Ntombela explained that the 65 beneficiaries of the project are the legal rightful owners of 51% of the project – with the remaining 49% open to a strategic partner or partners to ensure long-term sustainability of the project.

MEC for Agriculture and Rural Development Thembeni Nxangisa said that the department and the provincial government have invested over R218-million into the project – which consists of 2,094 hectares of land, 583 dairy animals, nine horses, 10 tractors and milking equipment.

“All 65 beneficiaries were elated,” said Nxangisa, “they welcomed the handover [of the] project, and they are committed to work closely with the government to make the project a success and create wealth for themselves and their children and grandchildren”.

Ntombela said she visited the project on 12 January 2022, and that these resources will enable the project to farm effectively with dairy and beef cattle, and cultivate pastures and crops, including maize, soya beans and other vegetables.

While Ntombela was impressed to see 39 youthful general workers including the two managers employed by the project, she noted that only 34% of the 65 verified beneficiaries are women and 66% are men.

“These clearly indicate that there is still much work to be done in ensuring greater participation of women in commercial agriculture,” she said.

Speaking of the Constitution, Ntombela said, “It will be difficult if impossible to achieve true reconciliation until the land question is addressed comprehensively.

“According to research the land transferred from whites to blacks between 1994 and 2020 is roughly about 11% which presents a concern for rectifying the injustices of the past.”

When asked how the beneficiaries felt about having to wait nearly a decade to be included in this project, MEC Nxangisa said, “They waited too long. And they acknowledged that it was worth the waiting, realising that we are finally handing the project to them. We are handing their wealth to them.

Nxangisa said that the department, which will work with the farmers for the next three years, providing mentorship and training on site, has undertaken to invest a further R20-million in the farm.

“We will also be approaching capable funders and other partners that would be working closely with them with their farm. [ These partners are those] who have been in business for a very long time who have got the financial muscle to support the project,” said Nxangisa.

When asked if this type of maladministration and delay would happen again for empowerment projects, Nxangisa said,“It will never happen again. We’ve set in motion tight processes”, listing the implementation of the Vrede Integrated Farming Trust, which will run the farm, and an appointed six- person executive.

The government has already appointed an accountant and a lawyer to assist the farmers. A senior manager will be sent to join the team, to facilitate and monitor productivity. The person will be reporting to the beneficiaries, the community and the government. DM