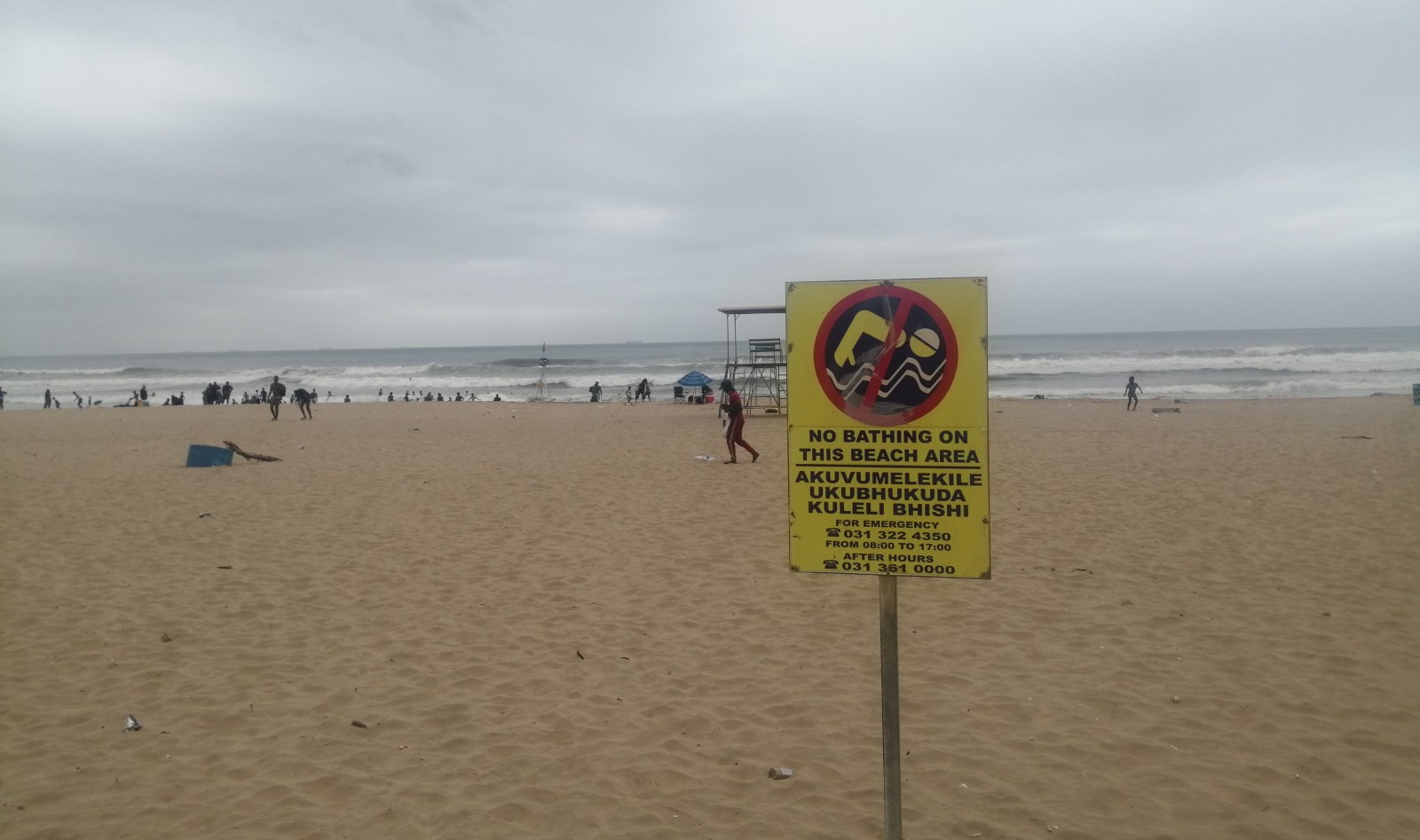 On Wednesday beach users swam at Durban’s South Beach despite signs warning the public that the ocean was polluted as a result of a recent sewage spill. (Photo: Nokulunga Majola)

Blue Flag status at risk as activists have accused eThekwini Municipality of lack of transparency over sewage spills and pollution.

Over the past few weeks, several beaches across Durban’s coastline have been intermittently closed and reopened because of serious raw sewage spills into the ocean and rivers.

Desmond D’sa of the South Durban Community Environment Alliance (SDCEA) accused the eThekwini Municipality of failing to conduct proper and regular maintenance at its facilities and pump station at Northern Water and the Sanitation Waste Waterworks Treatment Centre. As a result, approximately 15 million litres of raw sewage has spilt so far into the local rivers and the Indian Ocean, he said.

Earlier this week, the municipality announced that the E. coli levels at all of the beaches, which had been closed, are steadily decreasing. Spokesperson Msawakhe Mayisela said the closure of beaches “is a precautionary measure to guard against the public bearing the brunt of contaminated water”.

Mayisela said more water quality tests will be done. He urged beach users to be patient and only swim in the sea once it is deemed safe to do so by the City.

On Wednesday morning, GroundUp visited some of the Durban beaches including the harbour. Despite beach closures in place with visible signage, some beach goers still swam. At some beaches, council workers were hard at work cleaning because the beaches were filled with litter after the recent heavy rains.

D’sa and other activists have taken issue with the way the City has been dealing with sewage pollution.

He said sewage water is being improperly disposed of into rivers, lakes and the ocean. This has serious health impacts for people and can “lead to the deaths of rivers and seas”.

“Sewage water has some degree of chlorine or similar agents. The chlorine or other disinfectant reacts with organic matter to create different end-products such as chloroform or haloketones, which can be harmful in either the short or long term. This will inevitably kill the fish and other marine organisms,” he said.

D’sa said a similar catastrophe happened in December 2007 where sewage water was dumped into the uMhlatuzana River and ended up in the Durban Harbour. Thousands of fish and other marine life were killed, he said.

Delwyn Pillay from Greenpeace Africa said they first raised the alarm a year ago when oil and raw sewage began flowing into the bay and harbour. “No pollution incident report was ever released to the public, just a vague statement by eThekwini Municipality, stating that it is doing all it can to address pollution and sewage leaks into the harbour,” he said.

“The municipality has been instructed to lower the Blue Flag at affected beaches and increase the frequency of water quality sampling,” said Tevya Lotriet.

Lotriet is national coastal coordinator at the Wildlife and Environment Society of South Africa (Wessa) which is responsible for coordinating the Blue Flag programme nationally.

At least 12 beaches within eThekwini Municipality were awarded the Blue Flag status in the 2020/21 season. Five of these received full status and seven are pilot sites. The current Blue Flag season ends on 31 October 2022.

Lotriet explained that when there is short term pollution like a sewage spill, the flag is temporarily lowered with reasons clearly stated on the Blue Flag board. “The sampling frequency should increase to ensure the pollution event has ended. Once the water quality is within the acceptable threshold, the flag can be raised again,” Lotriet said. DM