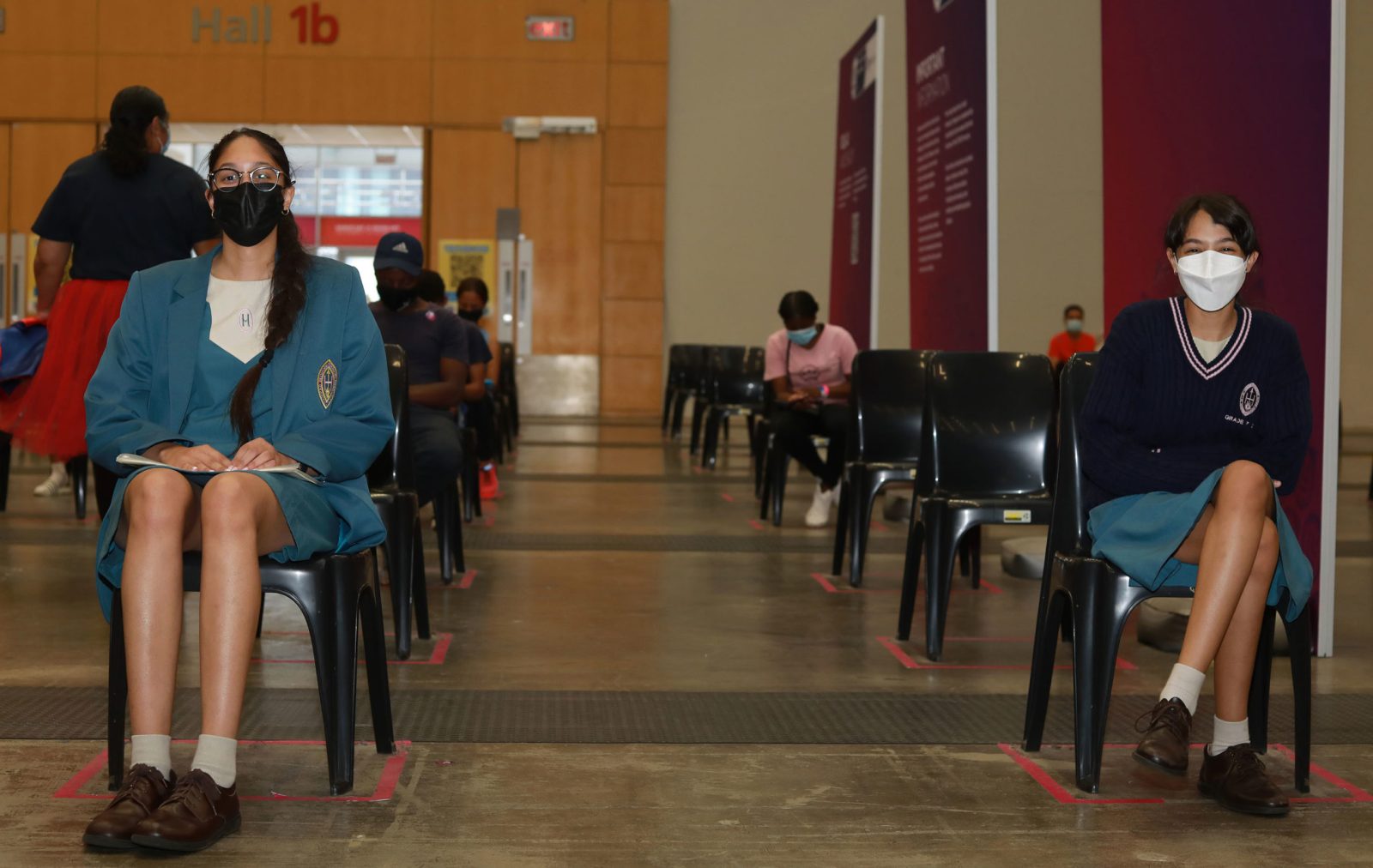 Sisters, Raabi’ah 16, and Tay-yibah Ebrahim 13, in the observation area after receiving a first dose of the Pfizer COVID-19 vaccine at the Vaccination Centre of Hope at the Cape Town International Convention Centre in Cape Town, South Africa, Wednesday Oct. 20, 2021. The vaccination of children in South Africa aged 12 to 17 against Covid-19 started today.Photo:Supplied

The national State of Disaster needs to end to allow schools to resume full-time schooling, says Western Cape premier Alan Winde while acknowledging the province is yet to exit the fourth wave of the pandemic.

Only 115,871 children in the Western Cape who are eligible for Covid-19 vaccines have received them.

This was announced by provincial health departmental head Dr Keith Cloete, during a weekly Covid-19 briefing on Thursday 13 January.

Western Cape premier Alan Winde, along with provincial health MEC Dr Nomafrench Mbombo and Cloete, used the briefing to urge those eligible — particularly teachers and learners — to get either vaccinated against Covid-19 or receive their booster shots.

He also called for an end to rotational learning and for learners to return to school full time, supporting the call of his education MEC Debbie Schäfer who on Thursday morning requested an end to 1-metre physical distancing requirements as well as the end of rotational learning for all grades.

“Quite frankly the long term effects on the youth is devastating,” said Winde about the lack of regular schooling. Earlier this week, Basic Education Minister Angie Motshekga said her department was exploring a return to normal schooling but that rotational schooling was to remain in place. This comes as schools in coastal provinces, including the Western Cape, prepare to open for the new academic year next week.

Urging learners with co-morbidities and other risk factors, Winde said: “Please go and get your vaccination as soon as possible”. While the province would be monitoring Covid-19 infections, Winde said schools “are safer” as vaccine information can be provided to learners directly and hygiene measures such as hand washing can be enforced. Looking back on previous waves, Winde said “schools didn’t stand up as a marked spreader of the virus”.

During the briefing, Cloete gave a summary of the provincial vaccination rates.

At this point, the province is focusing on unvaccinated people and those eligible for vaccination. Thus far, 19,704 people have received either a Pfizer or J&J booster shot while an additional 4,295 additional boosters were given to immuno-compromised individuals. He said it was “heartening” that of those who received their boosters, 46% had been over the age of 60.

Making his closing remarks, Winde said: “we need our schools to go back in full”. DM