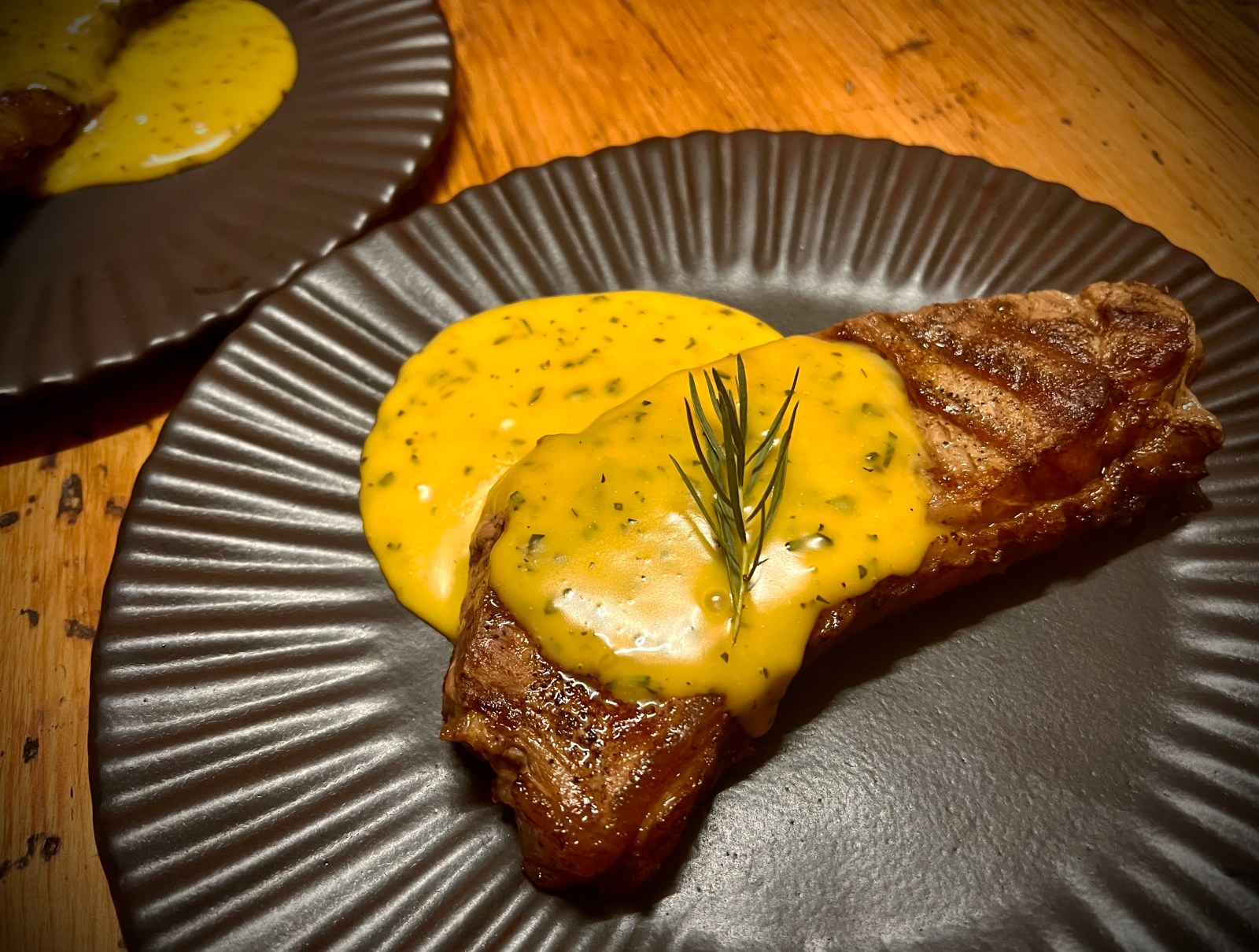 A Béarnaise sauce is all about tarragon, reduced white wine vinegar and egg yolks, as well as shallots or onion. Essentially, it’s an emulsified sauce (much like a Hollandaise) and requires clarified butter which, believe it or not, can be made by yourself in just minutes.

For this writer and (dare one say) epicure, Béarnaise is the king of the French sauces, certainly if it is to be served with a steak. It has richness yet finesse, delightful flavour yet an insouciant elegance. A fine thing indeed is the Béarnaise.

Larousse Gastronomique claims that the first known reference to the sauce was in a book which it names as La Cuisine des Villes et des Campagnes, published in 1818. I could find no reference to a book by this precise title but did come across a tome with a very similar name published in that year: Cuisinière de la campagne et de la Ville, published, yes, in 1818. Wikipedia cites this book, by Louis Eustache Audot, as an example of works that documented cuisine bourgeoise, being “the home cooking of middle class families as distinguished from elaborate restaurant cooking, haute cuisine, and from the cooking of the regions, the peasantry and the urban poor”.

Cuisine bourgeoise has been documented since the 17th century, as early as 1651. Whether the Béarnaise began its life as a dish from the bourgeois canon is moot. While it may seem unlikely, being as refined as we regard it to be, many of the great French dishes have their roots in peasant cooking, so we should not presume it is not the case. It is possible that a simpler version of a Béarnaise, perhaps more of a savoury custard flavoured with wild tarragon, may have been the precursor to the fine sauce we have today.

That’s one theory. Wikipedia would have us believe that the Béarnaise sauce was invented “accidentally” in 1836 by chef Jean-Louis Françoise-Collinet, “the accidental inventor of puffed potatoes (pommes de terre soufflées), and served at the 1836 opening of Le Pavillon Henri IV, a restaurant at Saint-Germain-en-Laye, not far from Paris. This assumption is supported by the fact that the restaurant was in the former residence of Henry IV of France, a gourmet himself, who was from Béarn, a former province now in the department of Pyrénées-Atlantiques, in southwestern France.”

Larousse begs to differ, arguing that while the sauce was first made in the 1830s by Françoise-Collinet and served in a restaurant called Pavillon Henry IV, it had been known of since its cited 1818 reference. That Henry IV was a known gourmet and came from Bearn (he was also known as Good King Henry and Henry the Great) does have the ring of truth to it. (Many references spell his name Henry by the way, though Henri in French.)

But tread carefully: Sauce Béarnaise should not be confused with preparations described as à la béarnaise, which refers to dishes from the Bearn region “such as daube, poule au pot, and game confits with cep mushrooms”, avers Larousse. So if you spot anything à la béarnaise on a restaurant menu, don’t presume it’s necessarily a Béarnaise sauce; check with the waiter.

Some tips for cooking a Béarnaise sauce:

Don’t overcook it: it is likely to curdle.

Keep the temperature very, very low, because too much heat can also cause it to curdle.

In fact, you could play it safe and finish the cooking of it entirely off the heat, as you’ll see in my recipe below.

However: if it does curdle, you should be able to save it. Larousse Gastronomique informs us that a Béarnaise which has curdled can be rescued by beating into it 1 Tbsp of hot water if the sauce is cold, or 1 Tbsp of cold water if the sauce is hot. My Béarnaise did not curdle (so try to follow my recipe exactly), luckily, so I am not able to vouch for this, but there’s a reasonable chance that Larousse knows the veracity of it.

The recipe in Larousse is somewhat complicated in that it includes chervil, thyme and a bay leaf as well as the expected tarragon. I think the very point of a Béarnaise is that the tarragon must be the purest voice in the choir, so why complicate it unnecessarily…

200 g clarified butter (see recipe for a 250 g quantity of it below; you can keep the rest)

Buy a plastic tub (not a brick in foil or paper) of butter and clarify it. The tub gives you a container in which to store the clarified butter in the fridge. Melt all the butter in a small saucepan on a very low heat until the solids separate from the fat (the curds from the whey). Leave it to stand off the heat for five minutes, then skim off the foam that rises to the top. Pour the whey back into the tub, leaving the solids (you will see a residue of it near the bottom) in the pot, to be discarded. Store it in the fridge.

First, make a tarragon vinegar reduction: in a saucepan, boil the white wine vinegar, lemon juice, 10 g of the tarragon and chopped shallots (or a young onion), with a little salt and pepper, until reduced by half.

Pour the reduction sauce into a bowl over a pot of barely simmering water on the lowest possible heat (i.e. a bainmarie).

Whisk the egg yolks into the reduction and continue beating until the colour pales and can coat the back of a spoon.

Remove from the heat (allow to cool for a couple of minutes) and drizzle the butter in very slowly, while whisking continuously.