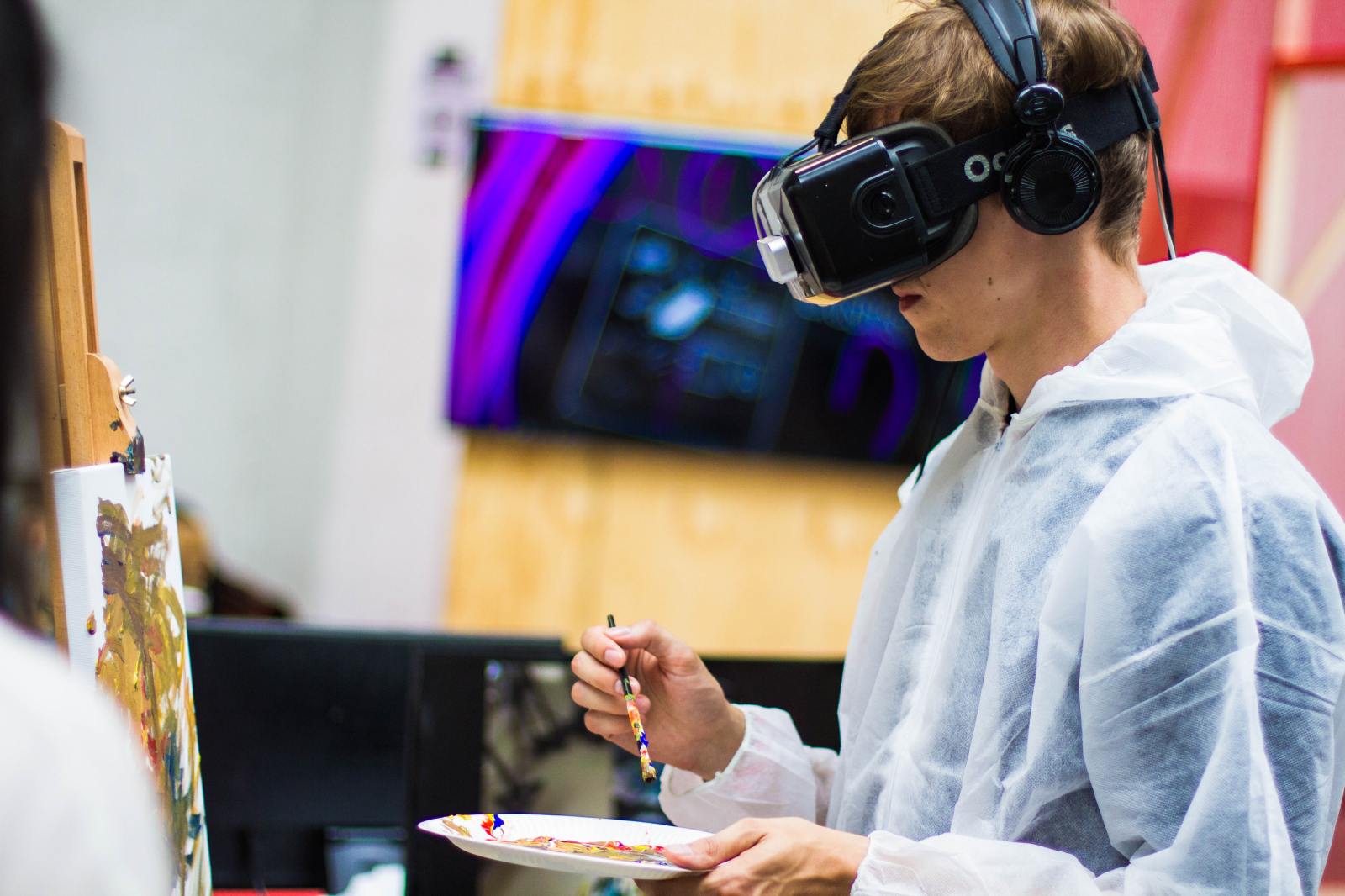 The metaverse is here, and judging by the investments tech companies are making, there is no turning back.

“Lots of things that are physical today, like screens, will just be able to be holograms in the future. You won’t need a physical TV… You’re going to be able to move across these different experiences on all kinds of different devices, sometimes using virtual reality so you’re fully immersed, sometimes using augmented reality glasses so you can be present in the physical world as well, and sometimes on a computer or phone… Instead of typing or tapping, you’re gonna be able to gesture with your hands, say a few words, or even make things happen just by thinking about them. Your devices won’t be the focal point of your attention anymore… These are some of the basic concepts for the metaverse,” explained Facebook parent company Meta’s CEO, Mark Zuckerberg, about 10 minutes into the 77-minute presentation streamed on 28 October 2021, titled “The Metaverse and How We’ll Build It Together”.

He also promised viewers that much of this will be mainstream in five to 10 years. He went on to announce the name change of the company he founded, from Facebook to Meta, effectively positioning the company as a key architect of the long-discussed metaverse.

While the version of the metaverse Zuckerberg presents might sound like something straight out of science fiction (indeed, the term was born out of science fiction, having been coined by the writer Neal Stephenson in his 1992 novel Snow Crash), some elements have already been in use for years, and companies are making moves and readying for the profits.

Fans of virtual reality (VR) games, such as those using the millions of Oculus Quest 2 and earlier iterations of VR headsets, have already been getting a taste of the early metaverse, where they can play numerous immersive games, use fitness apps such as Supernatural, as well as hang out and socialise in VR environments.

As reported by numerous news platforms, including Business Insider, during the December 2021 Christmas period, the Oculus VR app, an accompanying app for use with Meta’s Oculus Quest VR glasses, topped Apple’s app store charts, becoming the number-one downloaded app in the US on Christmas Day, and on the 26th, becoming one of the top five apps in 14 countries.

Meta doesn’t make sales figures for the VR glasses publicly available. However, in November 2021, Cristiano Amon, the CEO and president of Qualcomm Technologies, a company that manufactures the Snapdragon chipset that powers the Oculus Quest 2 glasses, let slip that more than 10 million units had been shipped since the glasses were launched in October 2020. While that is nowhere near the billions of phones sold every year, those numbers as well as the chart-topping app mark a significant moment for VR, which has long struggled to attain mainstream success through various iterations. It is also a significant moment not only for Meta, which bought Oculus back in 2014, but also for proponents of the metaverse(s) as successor to the internet as we know it today.

A peek at a profitable 3D future

Decentraland, a 3D virtual world and a metaverse on its own, launched in 2017 and accessible from a VR headset as well as a regular computer, allows users to build the world and buy virtual plots of land in the platform as NFTs via the MANA cryptocurrency. The platform made metaverse news in November 2021 when a plot of digital land in Decentraland sold for a record $2.43-million worth of cryptocurrency. Although it is far from being mainstream, it offers a peek into the profit-making potential of the metaverse through the trading of entirely digital environments.

Nike just did it

While this move protects the company’s trademark and intellectual property from potentially being used by other entrepreneurs in the metaverse, it is not yet clear whether the company is looking to produce virtual apparel that users can buy to dress their avatars. However, in an interview with CNBC, trademark lawyer Josh Gerben says it is likely that the company is looking to do just that. Says Gerben: “They’re filing new applications for the company’s main trademarks, saying that they’re going to launch and start selling virtual clothing, headwear, shoes, in online and virtual worlds.” That same month Nike also posted openings for virtual footwear material designer jobs as well as other virtual design roles.

Just over a month later, on 13 December, Nike also announced its acquisition of RTFKT, a virtual design company founded in January 2020, which according to its online profile, “was born on the metaverse” and uses “the latest in game engines, NFT, blockchain authentication and augmented reality, combined with manufacturing expertise to create one-of-a-kind sneakers and digital artifacts”.

Beyond gaming: Stepping into the immersive virtual office

While virtual meeting spaces are not exactly new, Meta took another step towards refining the existing technology during Zuckerberg’s presentation, when it presented Horizon Workrooms. The beta version of the technology is already accessible for Oculus Quest 2 users. The idea is that users can wear their VR headset and find themselves in a virtual meeting space, such as a boardroom, for a more complete feeling of presence. Each person is represented by an avatar. Where Horizon sets itself apart from the competition is its ability to bring your computer along with you into the virtual space by casting your computer screen into the metaverse. Users are also able to use a virtual keyboard in the virtual space. The environment also features infinite whiteboard space where users can draw or jot down ideas to share with all the participants in the meeting.

For additional presence, the app also uses hand-tracking through the headset’s cameras, making it possible for users to use non-verbal communication cues by moving their hands and pointing in real-time. At this beta stage the software is buggy in parts, where hands might not move as expected, and the avatars are very cartoony.

However, Meta is working on a higher-end headset, to be launched in 2022. It is currently called Project Cambria. Although Meta is yet to give full details on its capabilities, according to the company’s head of VR devices, Angela Chang, the technology users can look forward to includes avatars that will be able to make natural eye contact and reflect facial expressions in real-time, as well as unlock mixed-reality experiences where you would be able to merge the physical and virtual worlds. Says Chang: “Imagine working at your virtual desk with multiple screens while seeing your real desk so clearly that you can pick up a pen and write notes without taking your headset off. Or you’re doing a workout with a virtual instructor in your living room.”

Meta is not the only company knocking on your virtual office door. Over the past decade Google and Microsoft have unsuccessfully dabbled in the consumer headset market; the former with Google Glass in 2013, Google Cardboard in 2014, and the Daydream headset in 2016, and the latter with the Microsoft HoloLens in 2016, and the HoloLens 2 in 2019. None took off with consumers, and both companies have since pivoted their headsets towards niche professional markets.

Microsoft, on the other hand, is developing its Microsoft Mesh platform, mixed-reality software that can be used with the HoloLens as well as other VR headsets, laptops and mobile devices. As of 4 January 2022, Qualcomm Technologies, the company behind the chipset that powers Meta’s Oculus Quest 2, announced a partnership with Microsoft to create custom augmented reality chips “to enable a new wave of power-efficient, lightweight AR glasses to deliver rich and immersive experiences”. Much like Meta’s Horizon Workrooms, Microsoft aims to incorporate the technology into the virtual working space, allowing for apps such as Microsoft Teams to be much more immersive and collaborative.

Apple on the grapevine

Although Apple has kept mum on all things metaverse, rumours continue that the company has long been secretly working on its own metaverse, including a software ecosystem as well as the hardware to access it. As early as January 2021, Bloomberg reported: “As a mostly virtual reality device, it will display an all-encompassing 3D digital environment for gaming, watching video and communicating. AR functionality, the ability to overlay images and information over a view of the real world, will be more limited. Apple has planned to launch the product as soon as 2022.”

More recently, the macrumors.com website reported that “Apple has been exploring virtual reality and augmented reality technologies for more than 10 years based on patent filings, but with virtual and augmented reality exploding in popularity… Apple’s dabbling is growing more serious and is expected to lead to an AR/VR product in 2022.” DM/ML