(Bloomberg) --North Korea fired a ballistic missile that flew at almost 10 times the speed of sound into waters off its eastern coast, ratcheting up tensions as Kim Jong Un ignored calls for a return to stalled nuclear talks.

The missile launched Tuesday morning traveled about 700 kilometers (435 miles) and rose to an altitude of about 60 kms before falling into the sea separating the peninsula from Japan, South Korea defense agencies said. The rocket lifted off from the same inland province from where North Korea said it tested a hypersonic missile less than a week ago. The latest missile flew at speeds approaching Mach 10.

The South Korea National Security Council and Japanese Prime Minister Fumio Kishida separately expressed regret over the test, with Seoul urging North Korea to return to talks. The allies were working with the U.S. to analyze details of the launch, which Japan said likely landed in waters outside of its exclusive economic zone.

Shares of South Korea’s so-called “peace stocks,” which tend to benefit from talks between Seoul and Pyongyang, slipped Tuesday, led by J.Estina Co, which sank as much as 5.2%. Hyundai Elevator Co. fell as much as 2.5%, while Shinwon Corp. and Ananti Inc. were down as much as 3.5% and 3%, respectively.

While ballistic missiles commonly travel at hypersonic velocities — speeds in excess of Mach 5 — the U.S., China, North Korea and others are in a race to develop weapons with maneuverable gliders that can evade defense systems and deliver warheads. North Korea last week claimed a successful test of a “hypersonic gliding warhead” that turned 120 km from its original flight path, potentially showing its ability to get around U.S. anti-missile systems deployed in South Korea.

The country’s ability to fire a missile that travels at Mach 10, compared with Mach 3 for a previous test in September, could mark another milestone in Kim’s efforts to build an arsenal of weapons to erode U.S. strategic advantages. North Korea typically doesn’t comment on its launches until about a day after the fact, lauding its achievements in state-controlled media and releasing images that are carefully scrutinized by weapons experts.

The tests in January come after Kim told a year-end meeting of top ruling party officials he was more interested in bolstering his arsenal than returning to stalled nuclear talks with the U.S. In his remarks, Kim, who turned 38 on Saturday, urged North Korea to focus on easing food shortages and containing Covid and suggested disarmament talks were a low priority in the coming months.

Nuclear talks between the U.S. and North Korea broke down about two years ago after a brief revival under former President Donald Trump. The Biden administration has said the door is open for talks and indicated it would be willing to consider economic incentives to reward North Korea for taking steps to wind down its nuclear arsenal.

On Monday, the U.S.’s representative to the United Nations released a joint statement with countries including France, Japan and the U.K. condemning the previous hypersonic missile launch and urging Security Council efforts to oppose further tests. “These actions increase the risk of miscalculation and escalation and pose a significant threat to regional stability,” Ambassador Linda Thomas-Greenfield said in the statement. 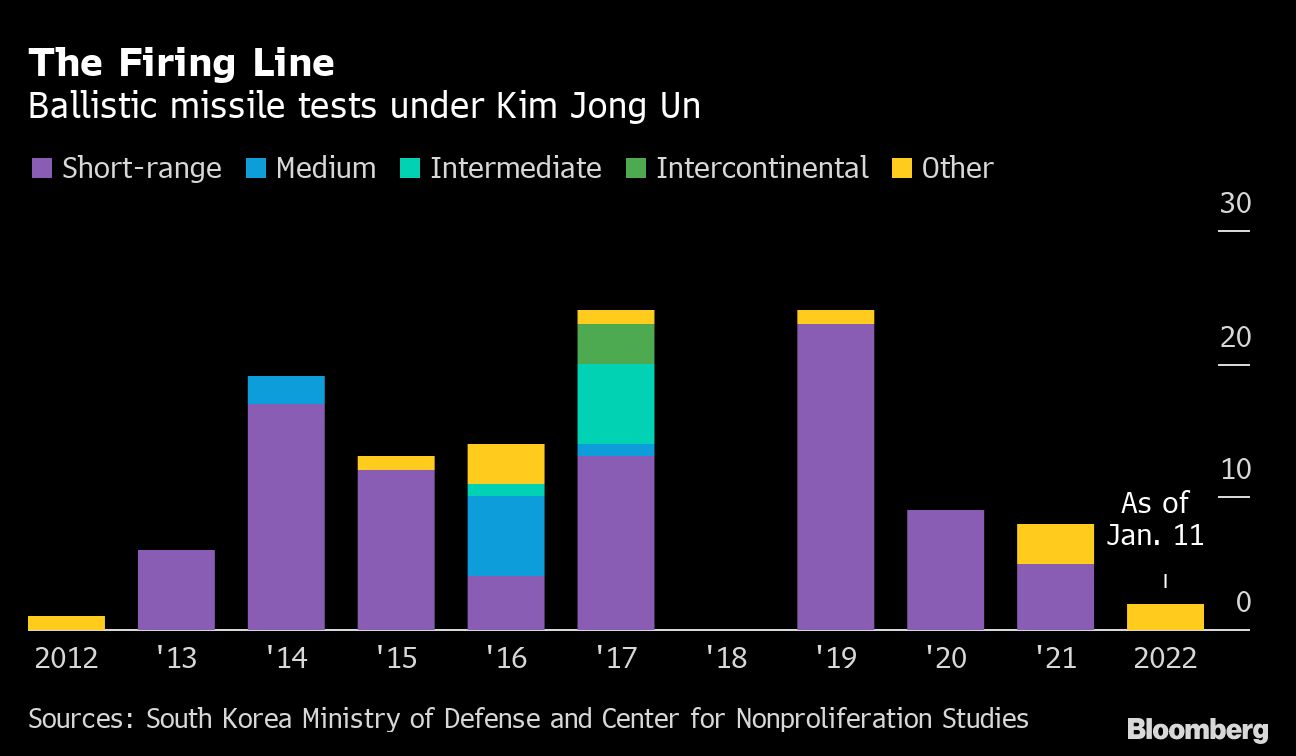 The South Korean Defense Ministry has dismissed North Korea’s hypersonic advances, saying the claims appeared to be exaggerated and that Pyongyang still hadn’t developed the necessary technology for such maneuvering reentry vehicles. Still, differing accounts of the launch suggest Japan at least may have had trouble tracking North Korea’s MARV as it approached its target, Jeffrey Lewis, director of the East Asia nonproliferation program at the Middlebury Institute of International Studies at Monterey, said in his Arms Control Wonk podcast.

Reaching the top speed of Mach 10 would be a big achievement, said Cha Du-hyeogn, who served as a security adviser to former South Korean President Lee Myung-bak and who is now a visiting research fellow at the Asan Institute for Policy Studies in Seoul. “To be a successful hypersonic missile launch, the speed of the missile must be constant throughout the flight, which North Korea’s yet to demonstrate,” Cha said.

Images released of the missile North Korea tested last week appeared to show a new variant of an engine that could be used for intercontinental ballistic missiles, Ankit Panda, author of “Kim Jong Un and the Bomb: Survival and Deterrence in North Korea,” wrote in NK News. That engine test could potentially yield “data useful for improving its longer-range intercontinental ballistic missiles as well.”