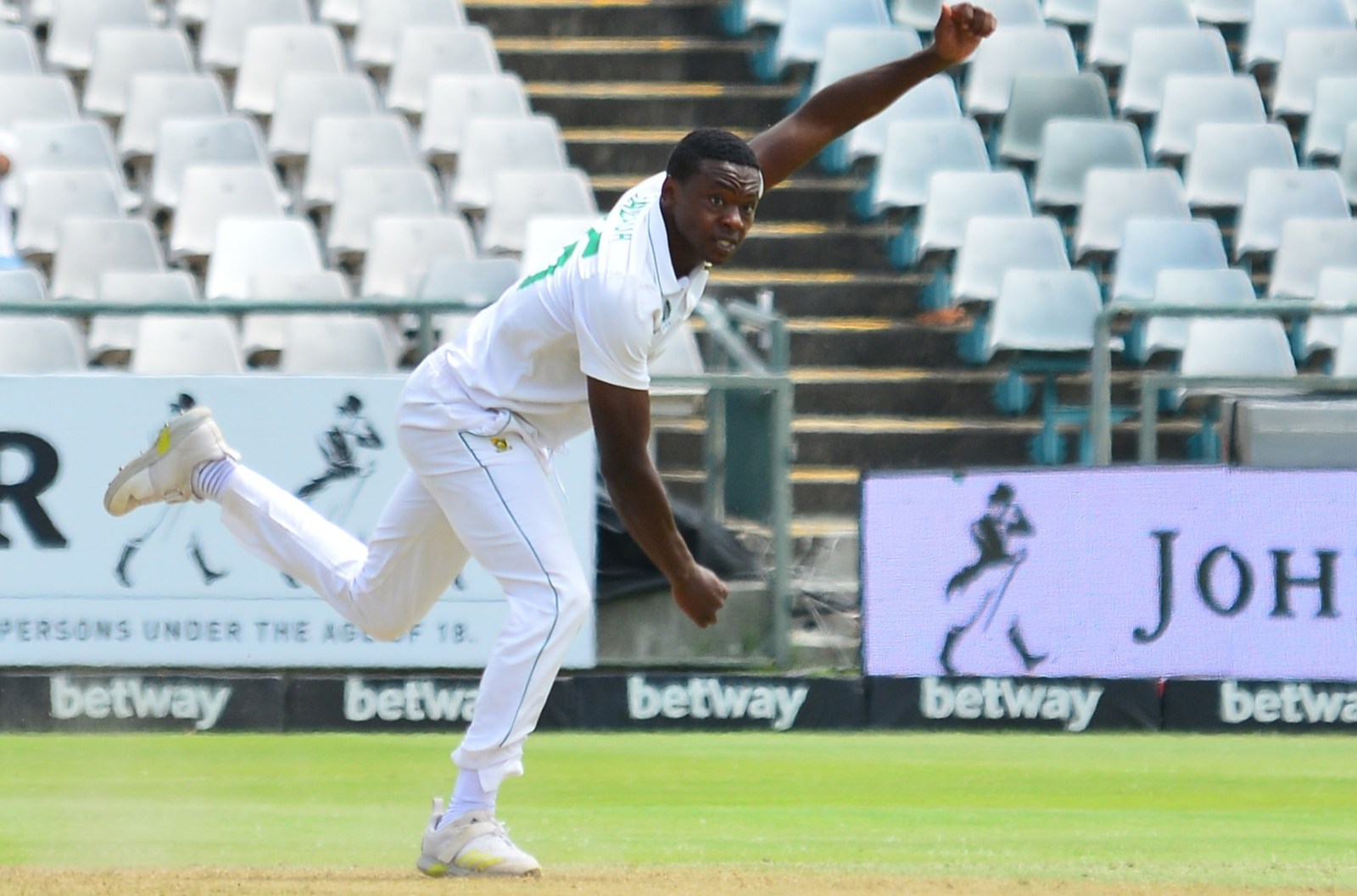 Kagiso Rabada of South Africa delivered a top bowling display against India in his 50th Test match at Newlands in Cape Town on Tuesday, finishing the day with figures of 4-73. (Photo: Grant Pitcher / Gallo Images)

A disciplined bowling display, led by the talismanic Kagiso Rabada playing in his 50th Test match, aided the Proteas in restricting India to 223 all out on Tuesday on the first day of the deciding Test.

Rabada and his colleagues kept the India batters under pressure for most of the day after captain Dean Elgar lost his third toss of the series and South Africa’s 14th in their last 15 Tests, to hand India a slight advantage.

Every South African bowler contributed by adding at least one wicket while touring skipper Virat Kohli contributed 79 runs. He was the only Indian batter to pass 50 runs, in a riveting contest with Rabada.

Under cloudy skies, there was early promise for the Proteas bowlers. Rabada drew the edge of Mayank Agarwal’s bat in his second over of the morning, but the difficult catch was put down by Keegan Petersen who dived to his right.

After Rabada and Duanne Olivier built up the pressure of 24 dot balls, a breakthrough finally came when Olivier dismissed vice-captain KL Rahul for 12 runs off 35 deliveries. Another excellent delivery induced the edge.

The very next over, Rabada finally got his man, Agarwal, caught at second slip by Aiden Makram for 15 off 35 deliveries with a beauty.

The Indians went into lunch on 75-2 thanks to a patient partnership between returning skipper Kohli and Cheteshwar Pujara as they attempted to rebuild the innings.

The pair put on a steady partnership of 62 off 151 deliveries before left-arm pacer Marco Jansen grabbed the wicket of Pujara for 43 off 77 deliveries, after striking four boundaries. India were on 95-3 when Ajinkya Rahane stepped to the wicket.

He aided India in passing the 100-run mark before he was dismissed for nine runs off 12 balls by an excellent delivery, immediately after the drinks break, by Rabada. The ball pitched on a good length and found the faintest of edges off Rahane’s bat and was well caught by wicketkeeper Kyle Verreynne who took five catches in the innings.

On the other end, Kohli brought up a patient 50 off 158 deliveries, the second-slowest half-century of his career, after the tea break.

A steady 51-run partnership between the Indian skipper and Rishabh Pant followed, but was eventually broken by Jansen. The extra bounce extracted by the tall, quick bowler forced Pant to play a back-of-a-length delivery into the gully region with Petersen doing the rest by taking the catch.

Pant scored 27 runs off 50 deliveries, striking four boundaries in the process. The 21-year-old Jansen finished with impressive figures of three for 55.

After an intense battle between the best batter and the best bowler on display today, Rabada finally dismissed Kohli for 79 runs off a mammoth 201 deliveries, striking 12 fours and one six. It was a rare loose shot as Kohli wafted at one outside the off stump,

Kohli continues to search for his 28th Test century since hitting his last hundred in November 2019.

Rabada finished with good figures of four for 73. The Proteas’ spearhead bowler is the leading wicket taker in the series with 17 scalps.

Lungi Ngidi and Keshav Maharaj helped wrap up the tail as they snapped up one wicket apiece. India were bowled out for 223.

South Africa had to see out 10 overs before stumps. Unfortunately, Wanderers hero Elgar lost his wicket to Jasprit Bumrah for three runs off 16 deliveries. Bumrah bowled an excellent line and length with the ball jagging away from the left-handed batter and finding the outside edge of the skipper’s bat. Pujara took it comfortably at slip.

Markram and Maharaj, coming in as nightwatchman, did well to see out the last few overs despite the onslaught of accurate fast bowling by India as they took South Africa to 17-1 at stumps.

Day one was a tightly contested affair. A dominant morning session by either team tomorrow could sway the Test match in their team’s direction. Markram has the perfect opportunity to put a difficult series with the bat behind him with a big score on day two. DM