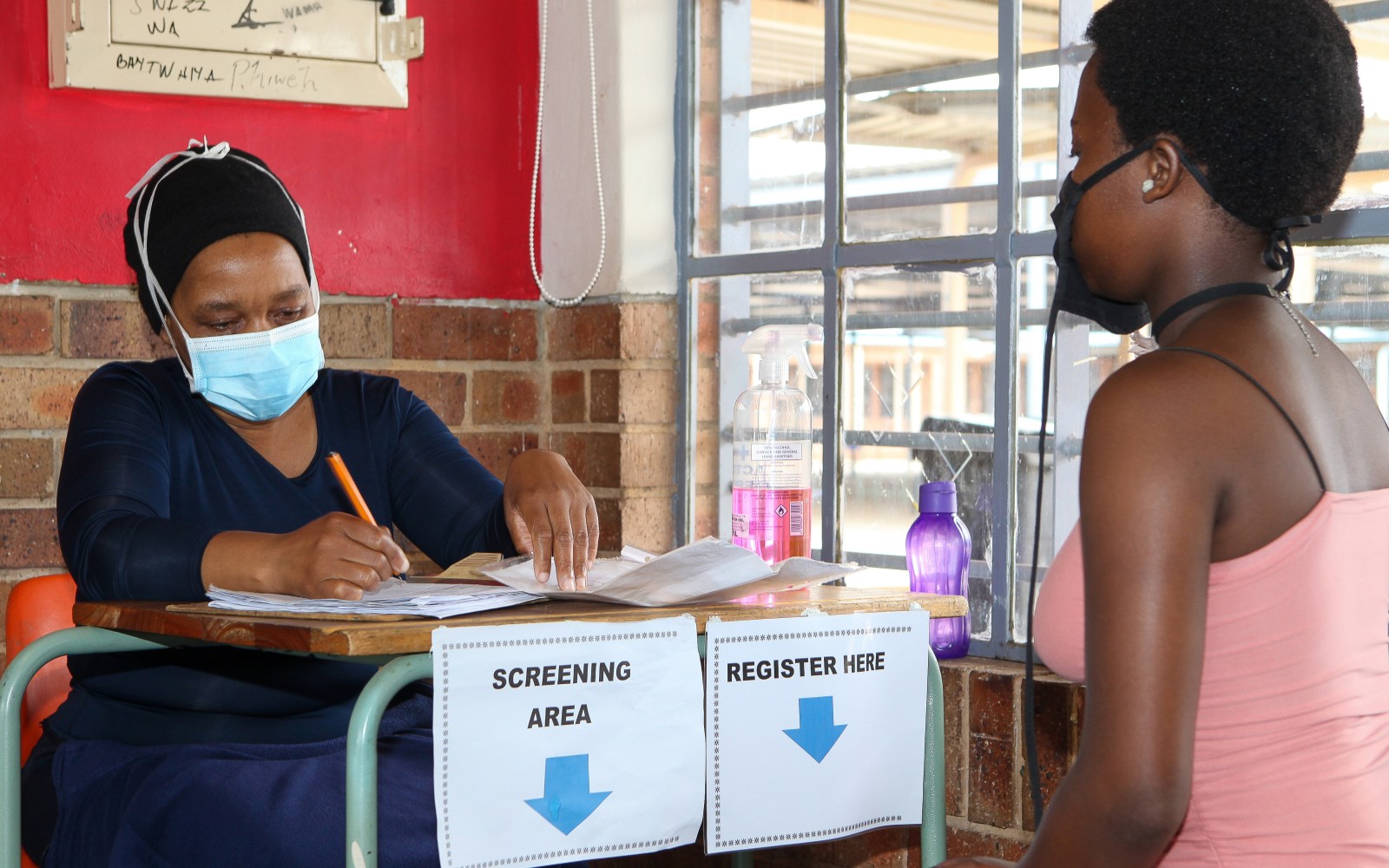 New York’s Broadway theatres will extend their mask and vaccine requirements to 30 April. At the same time, the city’s Covid-19 infections may have reached a peak, about a month after the first case of the Omicron variant was identified there.

Tennis star Novak Djokovic may stay in Australia and vie for a record 21st Grand Slam victory after a court quashed the cancellation of his visa. A new study showed high levels of protective immune cells that fight some common colds also made people less likely to contract Covid-19. 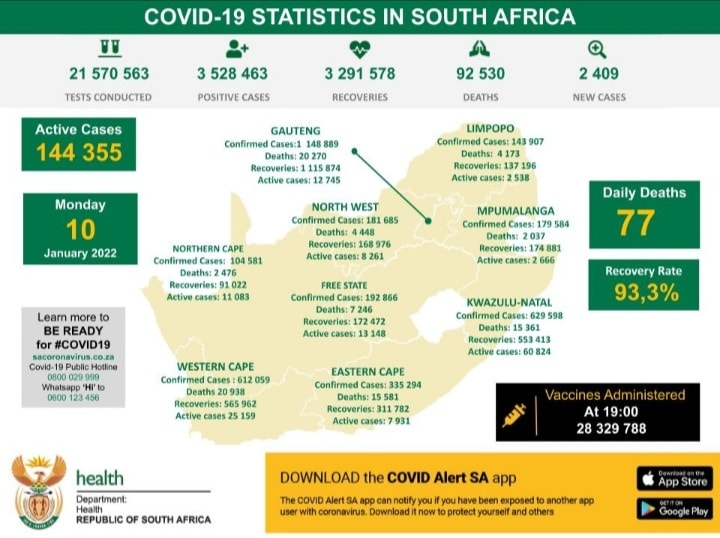 European Union member states have agreed to lift their air travel ban on southern African countries. Germany may need to tighten restrictions before its next scheduled pandemic policy meeting, a health expert said.

Omicron has flared in a Chinese port city that borders Beijing and spread inland, seeding the variant on the doorstep of the nation’s capital less than a month before the winter Olympics begin.

New Jersey may have 8,000 Covid-related hospitalisations, nearing the state’s pandemic peak, in the third week of January, according to Health Commissioner Judith Persichilli.

“We do believe we are going to have high levels for a couple of weeks,” Persichilli said on Monday during a virus briefing. She said daily cases were expected to hit 20,000 to 30,000 through January.

An earlier prediction, based on modelling, suggested as many as 9,000 hospitalisations by 14 January. New Jersey had more than 8,000 virus-infected inpatients in April 2020.

Prime Minister Mario Draghi said the Italian government’s priority is to avoid closing schools and blamed those yet to get vaccinated against Covid-19 for the nation’s pandemic woes.

“Most of the problems we have today stem from the fact that there are people who are not vaccinated,” Draghi said at a press conference in Rome on Monday. “It doesn’t make sense to close schools before everything else.”

The government successfully challenged in court a decision by the southern Campania region to keep schools closed after the Christmas vacation amid rising infections. Italy recorded more than 100,000 new cases and more than 700 new hospitalisations on Monday.

In the US, more than three of five hospitalised Covid patients are receiving it, O’Day said in a presentation at the JP Morgan Healthcare Conference on Monday.

Gilead is also working on a three-day course of the drug that can help patients outside hospital. Last year, it was shown in a big trial to lower risk of hospitalisation by 87% when given to high-risk patients. The data have been submitted to US regulators.

“It is effective against all variants so far,” O’Day said. In the future, the shorter course “will be one more piece of the armamentarium” for people who get Covid outside hospital.

Merck delivered 900,000 courses of its antiviral pill to the US in December and is set to provide three million courses ordered by the government by the end of January, CEO Rob Davis said.

Despite the supply-chain issues that have plagued companies around the world, Davis said Merck made 10 million courses of the drug, molnupiravir, as expected last year. They just need to be labelled and shipped, he said.

“We’re confident we’re going to deliver the product,” Davis said in an interview with Bloomberg Television on Monday. “We’re not seeing issues.”

Molnupiravir, which Merck makes in partnership with biotech Ridgeback Biotherapeutics, was authorised by the US Food and Drug Administration for use in high-risk adults in late December. Merck has said it will make at least 20 million courses of molnupiravir in 2022.

US school closures reached a record high for the academic year last week as Omicron-fuelled coronavirus cases caused staff shortages and disrupted classes, but the shutdowns are about to ease as more schools are set to reopen in-person.

At least 5,409 schools had cancelled classes or switched to virtual learning as of the end of last week, more than triple the count at the end of December, according to data from Burbio, which tracks closures.

New York’s Broadway theatres will extend their mask and vaccine requirements until 30 April, according to a statement posted on the website of the Broadway League.

The 41 theatres will also require full vaccination for children aged five to 11 starting on 29 January, in accordance with New York City guidelines.

Moderna said it has signed vaccine purchase agreements worth $18.5-billion for this year, along with options for another $3.5-billion, including booster shots.

In a statement on Monday, the company also said 2021 product sales would be $17.5-billion, slightly higher than the average analyst estimate of $17-billion, according to data compiled by Bloomberg. Additionally, the company said that it shipped 807 million vaccine doses in 2021. Previously, it had said it would deliver between 700 million and 800 million doses.

Serbian tennis star Novak Djokovic, who refuses to be vaccinated against Covid-19, reacted on Twitter after an Australian court quashed the cancellation of his visa and ordered his immediate release from detention in a hotel.

I’m pleased and grateful that the Judge overturned my visa cancellation. Despite all that has happened,I want to stay and try to compete @AustralianOpen
I remain focused on that. I flew here to play at one of the most important events we have in front of the amazing fans. 👇 pic.twitter.com/iJVbMfQ037

Novavax has shipped the first doses of its Covid-19 vaccine to Europe, marking the drug company’s entry into a potentially large new market.

CEO Stanley Erck announced the shipments during a presentation on Monday at the JP Morgan Healthcare Conference. The company also said in a statement that it and its partner Serum Institute of India had filed for an emergency-use authorisation for the shot in South Africa.

Only one weekly market will be allowed per day per zone in Delhi, Lieutenant-Governor Anil Baijal tweeted on Monday. The capital’s health department has been advised to beef up manpower at hospitals and scale up the vaccination drive, even among the 15-18 year age bracket.

Baltimore said some 60 of its 155 schools shifted to virtual learning on Monday because of staffing shortages caused by the pandemic or the inability to conduct testing for the virus. Maryland is among the states hit hardest by the surge in Omicron cases.

Ikea has imposed a financial penalty on UK employees who don’t get Covid-19 shots and miss work because they have to self-isolate.

The furniture retailer is cutting sick pay for staff who can’t work because of close contact with an infected person to £96.35 a week for the required 10-day isolation period — less than a fourth of average weekly wage before taxes, The Guardian newspaper reported on Monday. Ikea said it couldn’t immediately comment.

The Bangladesh government has ordered people to show vaccine certificates to dine in restaurants and stay in hotels, starting on 13 January, as virus cases surge. Buses and trains must operate at half capacity, according to a notice issued by the Cabinet Division on Monday. The government also banned all open-air social, political and religious events and made it compulsory to wear masks outdoors. Covid-19 cases rose by 2,231 in a day to about 1.6 million on Monday.

Japan’s Prime Minister Fumio Kishida is expected to announce an extension to the ban on foreign arrivals this week, Nikkei reported, without saying how it obtained the information.

The EU decision lifts the so-called emergency brake introduced in November, the French government, which holds the rotating EU presidency, said in a tweet. Travellers from the region will still be subject to health measures applicable to travellers from third countries.

European nations had suspended most air travel from Botswana, Eswatini, Lesotho, Mozambique, Namibia, South Africa and Zimbabwe as scientists scrambled to assess the severity of the Omicron variant.

Restaurants won’t be allowed to seat groups larger than eight and will have to close by 11pm. Public events with more than 50 people are only permitted if attendees present proof of vaccination. The curbs take effect on Wednesday.

Researchers found higher levels of T cells against certain colds in people who didn’t develop Covid while living with someone who had the disease, according to a study led by the UK’s Imperial College London. The prior illnesses were caused by other coronaviruses related to SARS-CoV-2.

The findings provide further evidence of the protective effects of T cells, an arm of the immune system that’s gaining attention as the pandemic stretches into its third year and new variants like Omicron erode vaccine protection. DM/MC