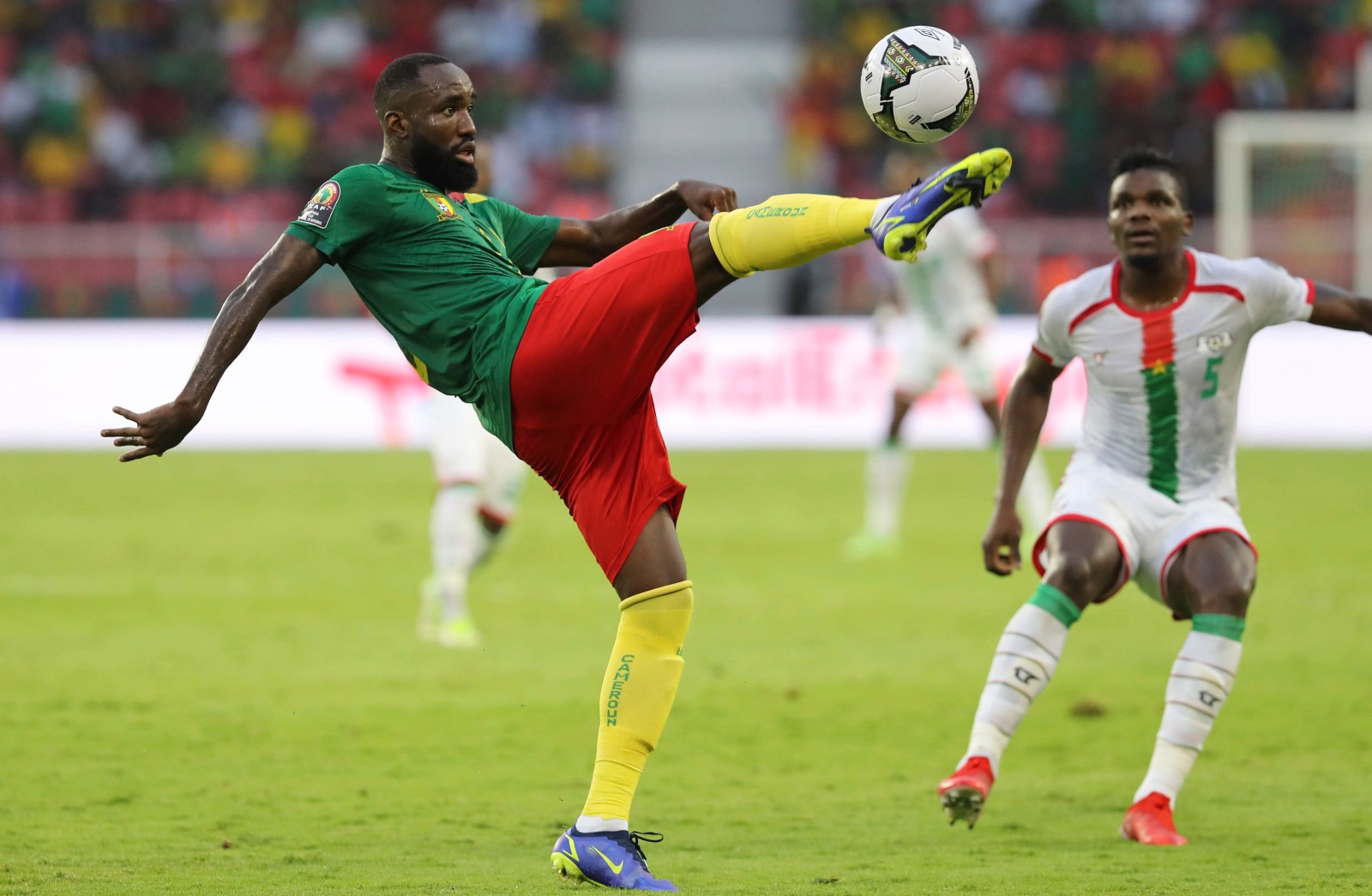 Moumi Nicolas Brice of Cameroon clears the ball away from Patrick Malo of Burkina Faso during their 2021 Africa Cup of Nations match at Olembe Stadium in Yaounde, Cameroon on 9 January 2022. (Photo: EPA/Gavin Barker)

Hosts Cameroon and islanders Cape Verde took control of Group A at the Africa Cup of Nations following victories over Burkina Faso and Ethiopia respectively.

The Africa Cup of Nations (Afcon) roared to life on Sunday with host nation Cameroon kicking off their campaign with a 2-1 victory over a stubborn Burkina Faso side, thanks to a brace from skipper Vincent Aboubakar.

In the other Group A match, minnows Cape Verde stunned 10-man Ethiopia 1-0 thanks to a Júlio Tavares close-range header.

After a colourful and vibrant opening ceremony, truncated by speeches from Paul Biya and Patrice Motsepe, presidents of the host country and the Confederation of African Football (CAF) respectively, the action kicked off with the home side on the back foot early on.

Despite thousands of Cameroonians having gathered at the Paul Biya Stadium in Yaounde to cheer their team on, it was Burkina Faso who started off the best and with a clear intent to silence the home support.

The Stallions did exactly that with 24 minutes played. Gustavo Sangaré gave the Burkinabes the lead with a ferocious volley following a defensive howler in the Cameroon box.

In the 40th minute and against the run of play, the Indomitable Lions drew level after a clumsy tackle from Burkina Faso captain and Aston Villa forward Bertrand Traoré on André Anguissa resulted in a spot kick.

With the weight of a nation on his broad shoulders, the experienced Aboubakar calmly slotted in the resultant penalty, triggering jubilant celebrations from the stands.

On the cusp of halftime the Stallions were once again their own worst enemy. Aboubakar calmy dispatched a second penalty after Fai Collins was chopped down by Issoufou Dayo in the Burkinabe box.

The remainder of the competition’s curtain-raiser produced little to no action as the Indomitable Lions held on to secure an important three points.

“It was an important victory for us,” said Toni Conceição, the Portuguese coach of Cameroon.

“We knew that playing at home in the opening game was going to be a bit stressful and that there was a psychological weight on the players’ shoulders, but they reacted well to falling behind… It wasn’t a great performance, but winning was what mattered.”

The show must go on

Meanwhile, with Covid-19 continuing to be a major factor in how the world operates, CAF has said teams participating in Afcon must still honour their fixtures if they have at least 11 players who have tested negative for Covid-19.

The tournament organisers have also said that when a team finds itself without any goalkeepers available in the squad, due to Covid-19, then an outfield player will be required to play in goal.

“A team that does not have a minimum of 11 players available will be considered to have lost the match 0-2,” the mother body of African football said. “In exceptional cases, the organising committee of the Africa Cup of Nations will take the appropriate decision.”

The organisers also said teams will be able to make five substitutions per match, as opposed to the traditional three. They can make an additional substitution if a game goes into extra time.

A number of teams competing in the pièce de résistance of African football reported positive Covid-19 cases in the lead-up to the tournament. These include tournament favourites Algeria and Senegal, as well as Ivory Coast, Morocco and Malawi.

The tournament’s opening fixture also saw hosts Cameroon missing four players, who were isolating after contracting the coronavirus, while opponents Burkina Faso had six missing due to the same problem. DM