eThekwini accused of deliberately misleading the public over sewage-polluted beaches 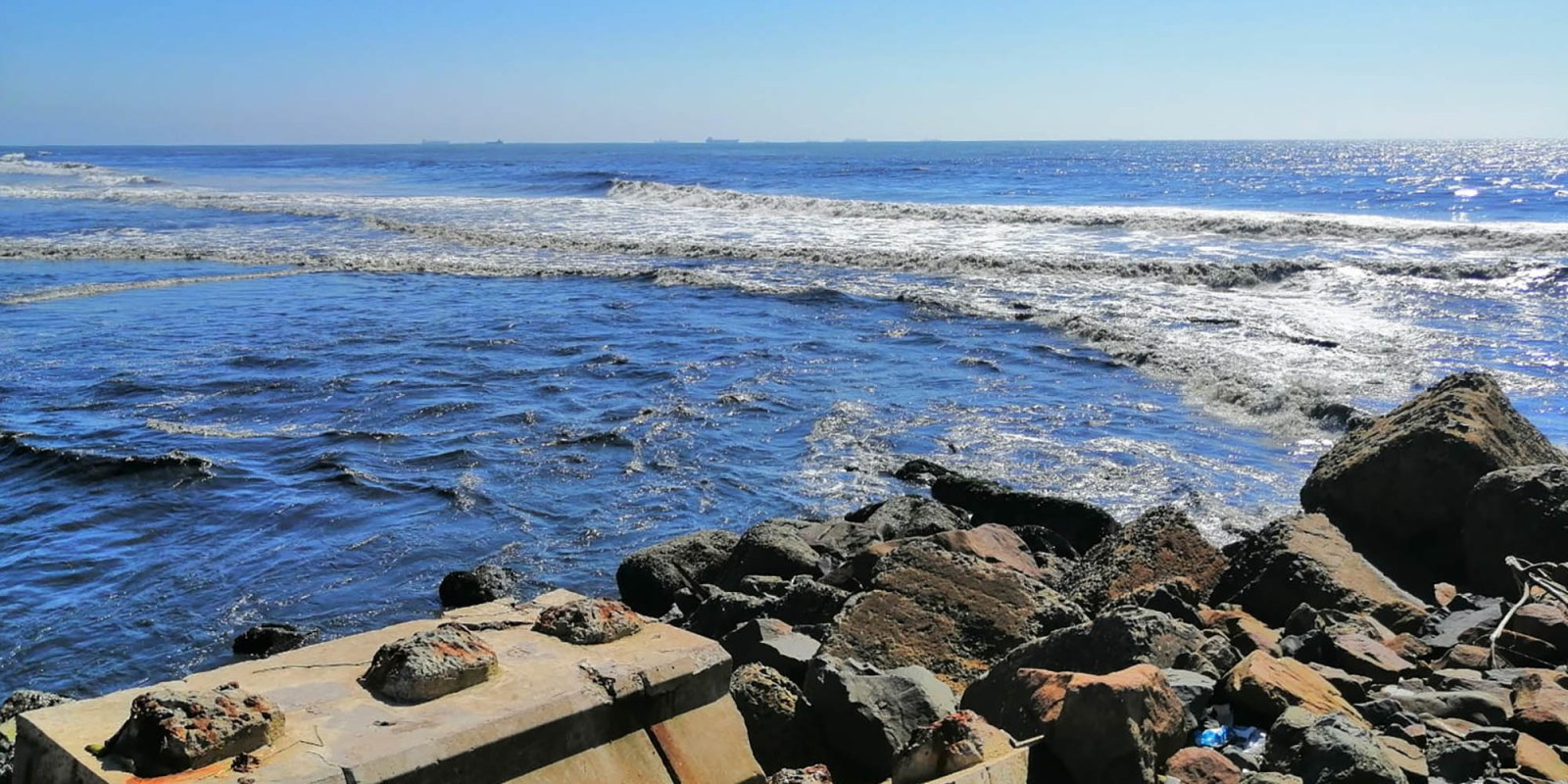 Visibly murky surf at the mouth of the Umgeni River on 1 January 2022. (Photo: Supplied)

The eThekwini Municipality has some tough questions to answer on whether it misled the citizens of Duban during a series of flip-flop decisions to close/open/close sewage-polluted beaches last week.

If the eThekwini Municipality’s communications unit and senior city official Malcolm Canham are to be believed, the recent torrent of treacle-coloured water at the mouth of the Durban’s Umgeni River “just looks a bit unsightly” and “there might be a bit of a groundwater smell” when bathers take a dip along the city’s Golden Mile.

In fact, the communications department claimed, the murky water was “free of any pollution that may pose threat to life” and was due to rotting water hyacinth plants washed down by the recent heavy rain.

No worries. Nothing to see here. It’s quite safe to take a dip, they reassured the public on Thursday.

Canham even went on camera on e.tv to declare that “the [water] samples have come back clear”.

But which samples was Canham referring to?

Surely not the results obtained by Our Burning Planet, which reveal that on the very day that Canham was reassuring the public that all was safe, Escherichia.coli levels (an indicator of sewage bacteria) in the Umgeni River exceeded 81,000 cfu/100ml of water and reached nearly 13,000 cfu/100ml at the Bay of Plenty Beach next to the Maharani and Elangeni hotels on Durban’s Golden Mile.

These levels are way in excess of Durban’s guideline values of less than 100 cfu for “excellent” quality bathing water and the upper limit of 2,000 cfu limit set for “poor” quality swimming water.

Were Canham and municipal spokesperson Msawakhe Mayisela also not aware that the murky seawater had also been linked to sewage sludge overflows into the Umgeni River from two of the city’s municipal wastewater treatment facilities?

During 2011, University of KwaZulu-Natal microbiology doctoral student Atheesha Singh also found waterborne viruses at every one of the five sampling points tested on the Umgeni River between Inanda Dam and Blue Lagoon.

She said adenoviruses, enteroviruses, rotaviruses and Hepatitis B viruses were detected in all water samples, along with bacterial pathogens such as Salmonella and Shigella.

“These results indicate the potential of viruses in the water samples, especially from the lower catchment areas, to infect the human hosts throughout the year. These observations have public healthcare implications and establish a need to monitor the viral population in addition to traditional water quality indicators,” she warned.

Last week, according to a report presented to the provincial Portfolio Committee on Environmental Affairs, large volumes of rain and stormwater caused an overflow of sewage sludge at the Northern wastewater treatment works. This was compounded by vandalism and electricity theft from the nearby Johanna Road sewage pump station.

The report was compiled by officials of the KwaZulu-Natal Department of Economic Development, Tourism and Environmental Affairs who appeared to be flummoxed by eThekwini’s sudden decision to lift the bathing ban on several Durban beaches on Thursday.

On 5 January, the city issued a media statement announcing the temporary closure of six beaches as a precautionary measure because of the “very abnormal murky water” flowing out of the mouth of the Umgeni River.

But the following day the city issued another statement declaring that the beaches were safe again.

“Following tests that were conducted, the city is reopening all beaches that were closed yesterday with immediate effect. According to the results, water is free of any pollution that may pose a threat to life. The water was murky because of hyacinths naturally found in water. It usually increases during summer months.”

Immediately after the bathing ban was lifted on 6 January, Canham was interviewed on e.tv at Blue Lagoon beach as visibly dark water continued to pour into the sea behind him from the mouth of the Umgeni.

During this television interview, Canham (a senior official of the eThekwini municipality’s Disaster Management Unit and chair of the city’s Festive Season Management Committee) blamed the heavy summer rain for “bringing down lots of products, plastic debris and that sort of thing” as well as water hyacinth weeds.

Because the river water was very discoloured, a decision had been taken to close neighbouring beaches the previous day “to the disappointment of the city and residents”.

In a previous press release on 2 January, eThekwini Mayor Mxolisi Kaunda declared that Durban was determined to “recement its place as a tourist mecca” after losing hundreds of millions of rands in tourism revenue as a result of Covid-19.

During this festive period, the city recorded more than 80 percent occupancy rates across its accommodation establishments.

“Over the Christmas weekend alone, preliminary indicators show close to 200,000 visitors descended on the City, spending close to R150-million and the contribution to the city’s GDP is approximately R350-million,” the city said.

Happily, Canham told e.tv, the city had collected water for analysis on 5  January and “the samples have come back clear – but for the fact that the waters are a little more discoloured and murky because of the groundwater that has come from the river.

“It just looks a bit unsightly,” he remarked, before announcing that the beaches would be reopened with immediate effect “so that people can enjoy themselves”.

Mawande Kheswa of e.tv seemed content to accept Canham’s account without further interrogation, and signed off by remarking: “Thank you very much for that clarity.” But many others did not buy this official explanation – including Department of Economic Development, Tourism and Environmental Affairs officials.

According to the report to the KZN Parliament: “The Department of Economic Development, Tourism and Environmental Affairs was not convinced about the change in the colour of the water being solely attributed to the decomposition of the water hyacinth.”

In the course of their subsequent investigation, officials were tipped off about a “black discharge” flowing from an outfall pipe from the Northern treatment works. They confirmed this information and also established that “the discharge was not reported to the authorities by eThekwini” as required by Section 30 of the National Environmental Management Act.

During subsequent site visits, they also found “black water with a foul odour” flowing into the ocean through the Umgeni River Mouth. Laguna beach had been reopened, but when lifeguards and officials on duty were questioned about which sample results had informed the decision to reopen the beach, “no clarity could be provided”.

An official then drove to Willowfield Crescent in Springfield Park and found a black substance flowing into the Umgeni River through an outfall from the Northern sewage treatment works.

According to the report, a government authorities meeting was held on 7 January and a decision was taken to close the beaches once more due to water quality test results “which indicated levels of E. coli which were in excess of the acceptable limits for recreational bathing”.

The Department of Economic Development, Tourism and Environmental Affairs was also considering “further enforcement actions in this regard”.

Further enquiries by Our Burning Planet have established that several water samples were collected from the Umgeni River and Durban beaches on 6 January.

These results show that on the day Canham and the city communications department announced the lifting of the ban, E. coli levels on three sections of the Umgeni ranged between 81,640 and 21,420 cfu.

Along the Durban beachfront, E. coli levels were North Beach (4,569), Bay of Plenty (12,997), Suncoast and Laguna beaches (9,208) – all considerably in excess of Durban’s own safe swimming water guidelines.

How does the city explain its decision to close the beaches (5 Jan), reopen them (6 Jan) and then close them again (7 Jan)?

We sent questions to the city communication unit on 7 January, asking:

When no response to telephone, text and email messages was received from city communications head Msawakhe Mayisela, we contacted Canham on his cellphone at 4.18pm on Saturday 8 January and asked him to clarify his e.tv interview assertion that “the samples have come back clear”.

Canham’s first response was that the decision to reopen the beaches had now been “rescinded”.

“The first lot of tests were on the okay side … Since then, more have been done,” he said.

At this point, before we could ask more questions, Canham stated that he was travelling in a rural area with poor mobile phone reception and requested that the conversation be continued later in the day.

Sure, we responded. “Shall we call you back, or will you call us back?”

Canham promised to call us later. He hasn’t. DM/OBP

eThekwini accused of deliberately misleading the public over sewage-polluted beaches