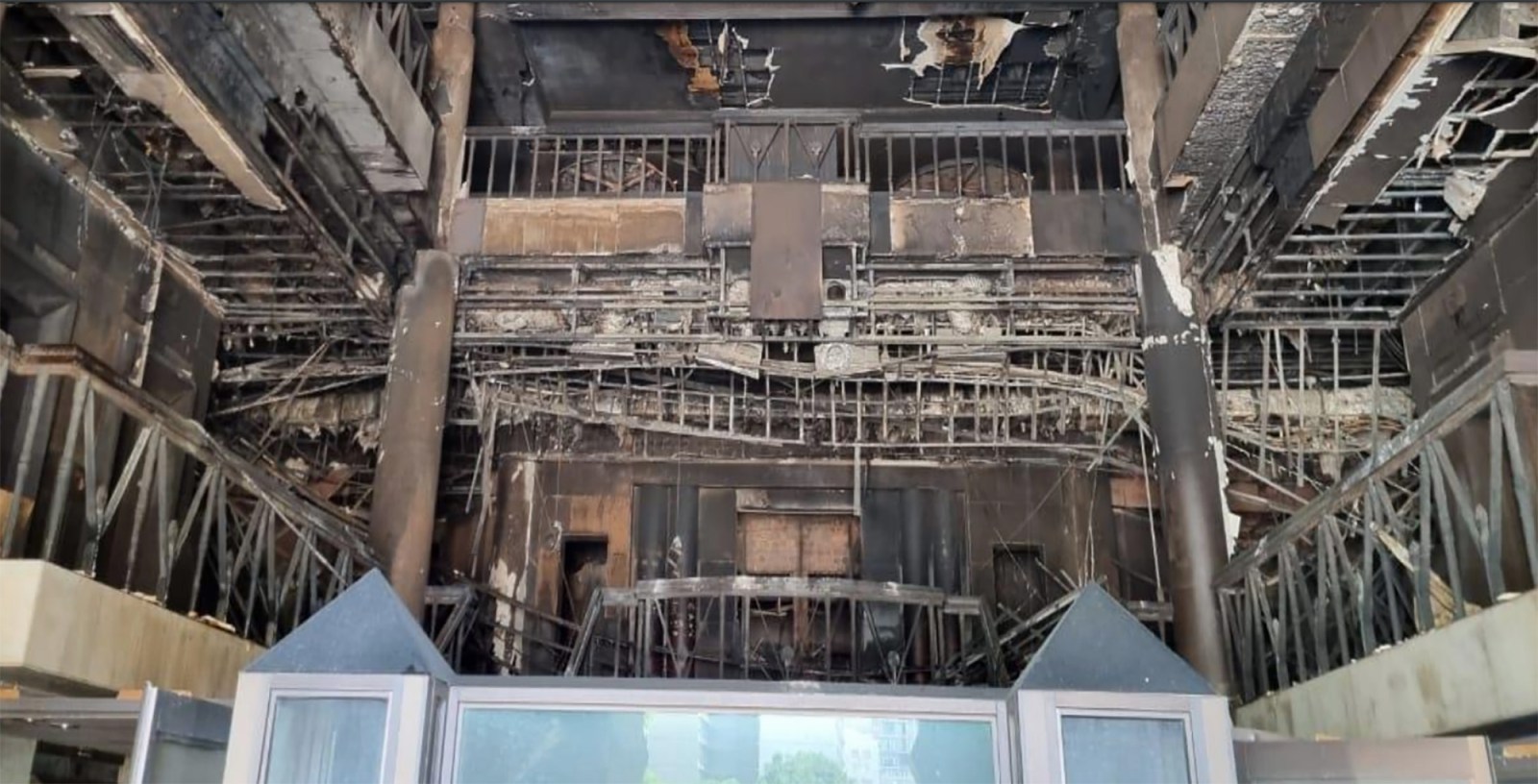 The interior and roof of the New Assembly building were destroyed in the fire on Sunday, 2 January 2022. (Photo: Supplied)

An observational report on the devastating fire that swept through Parliament on Sunday, 2 January 2022 identified faulty fire equipment and neglect as major factors that exacerbated the blaze. Meanwhile, the State of the Nation Address will now be held at the Cape Town City Hall.

An observational assessment report compiled by the City of Cape Town Fire Service and released to the public on Friday, paints a grim picture of the state of fire equipment at Parliament.

It would seem that the devastating fire that started on Sunday may have been an accident waiting to happen.

Answers to serious concerns raised by members of Parliament during a virtual meeting called by the Joint Standing Committee on Financial Management of Parliament on Tuesday, are also found in the report.

Whether the sprinkler system was operational was one of the major points that elicited a heated debate.

Observations carried out by the fire service between 4pm and 11.30pm on the night of 2 January revealed that there was non-compliance.

Sprinkler system did not activate

“The sprinkler control valve on the southern façade of the Old Assembly building had not been activated. The sprinklers did not activate. The sprinklers were serviced last in 2017, with another service scheduled for February 2020,” reads the report.

Fire service station commander JJ Williams, on a walkabout in the affected areas, found that the National Assembly sprinkler valve had not been serviced, the service date was February 2017, and the valve appeared to be closed.

“If properly serviced, this valve should have been locked with a chain in an open position and a block plan would have been available showing system layout. Roof smoke vents also did not activate at the National Assembly,” Williams said in his remarks.

The report further highlighted that the required layout block plan at the valve set was illegible. Another disturbing factor that seems to have contributed to the excessive heat and smoke encountered throughout the building was the open-latching of the fire doors into the fire escape staircase using small metal latches.

Questions around the fire alarm

At this stage, the report indicates, it appears to be unclear whether the fire alarm and detection were operational. It says no fire alarm was received by the Cape Town Fire Service from the Old or New National Assembly buildings. An alarm was only received after firefighters were already on scene from Tuynhuys adjacent to the Assembly building.

The City of Cape Town underlined that the cause of the fire will be addressed in the official investigation.

The briefing report  is not an official fire report, but for information purposes, providing the observations of City fire safety officers who worked on the scene.

Public Works and Infrastructure Minister Patricia de Lille confirmed earlier this week that nobody monitored the CCTV from 2am when the suspect allegedly entered the building until the police arrived at 6am.

FireSafetyObservations-ParliamentaryComplex-2January2022 by janet on Scribd

The suspected arsonist, Zandile Christmas Mafe (49), is alleged to have roamed the precinct for at least four hours before being spotted. He faces charges of housebreaking with intent to steal and theft, two counts of arson, possession of an explosive device and destruction of an essential infrastructure.

Responding to the fire observation report, the City’s Mayoral Member for Safety and Security JP Smith said: “The City is also cooperating with the SAPS investigation into the fire and will be meeting with the Hawks next week to assist and make such resources available.”

De Lille said that the observations related to “administrative issues”:  The Director-General of the Department of Public Works, Imtiaz Fazel, is busy going through the report and will respond to it by Monday.”

The fire report was forwarded to Parliament’s presiding officers, who held a meeting at 10am on Friday to consider various reports on options available for business continuity at Parliament, including the hosting of the State of the Nation Address (SONA).

Parliament’s spokesperson, Moloto Mothapo, said: “Following a sad and devastating week in which fires that started on Sunday and destroyed Parliament’s buildings, including the New Assembly and sections of the Old Assembly Chamber, we made a solemn undertaking that, despite the devastation of the disaster, we will not allow a situation where Parliament’s work is derailed or disrupted in any manner.

“Also damaged was the New Assembly chamber where official sittings of the National Assembly and joint sitting of both Houses of Parliament are usually held.

“Hence it was imperative to find a suitable venue for President Cyril Ramaphosa to deliver the 2022 SONA. This is the only occasion that brings together the three arms of the state – the legislature, the executive and the judiciary – under one roof.

“The Western Cape provincial government and the City of Cape Town stepped up and came to the rescue by offering the Cape Town International Convention Centre, the City Council Chambers and the City Hall as alternative venues.”

Mothapo continued: “After a great deal of consideration and following a thorough on-site inspection of alternative places, we have decided on the most suitable facility that meets our requirements. We are pleased to announce that the 2022 SONA will be held at the Cape Town City Hall.”

He reiterated that Parliament had ensured that the decision to host the SONA outside the Chamber of the National Assembly was taken in compliance with the Joint Rules of Parliament which determine where a joint sitting may be held.

Significantly, the City Hall was the first place from which Nelson Mandela addressed the nation after his release on 11 February 1990. Another highlight was when the late Archbishop Desmond Tutu introduced Mandela to thousands of jubilant South Africans in the same balcony on 9 May 1994, after his election as the first democratic president. DM/MC

Update:  Evidence of structural damage: According to a statement by the Department of Public Works and Infrastructure (DPWI) in consultation with the Hawks, a team have concluded a high level preliminary visual assessment of the damages, including the safety aspect of the site due to the recent fire at Parliament. “The professional team’s visual assessment started with the Old National Assembly and then proceeded to assess the structural damages on the National Assembly. On the basis of the preliminary visual inspections, there is evidence of severe structural damage (Major Spalling) to the slabs. The slabs affected by the damage are the 2nd, 3rd and 4th floor. In addition to the above there are major cracks in the walls on the 2nd and 3rd floor,” the statement reads. The l team recommended that the New Assembly building is “unsafe, should be cordoned off and closed with immediate effect”.