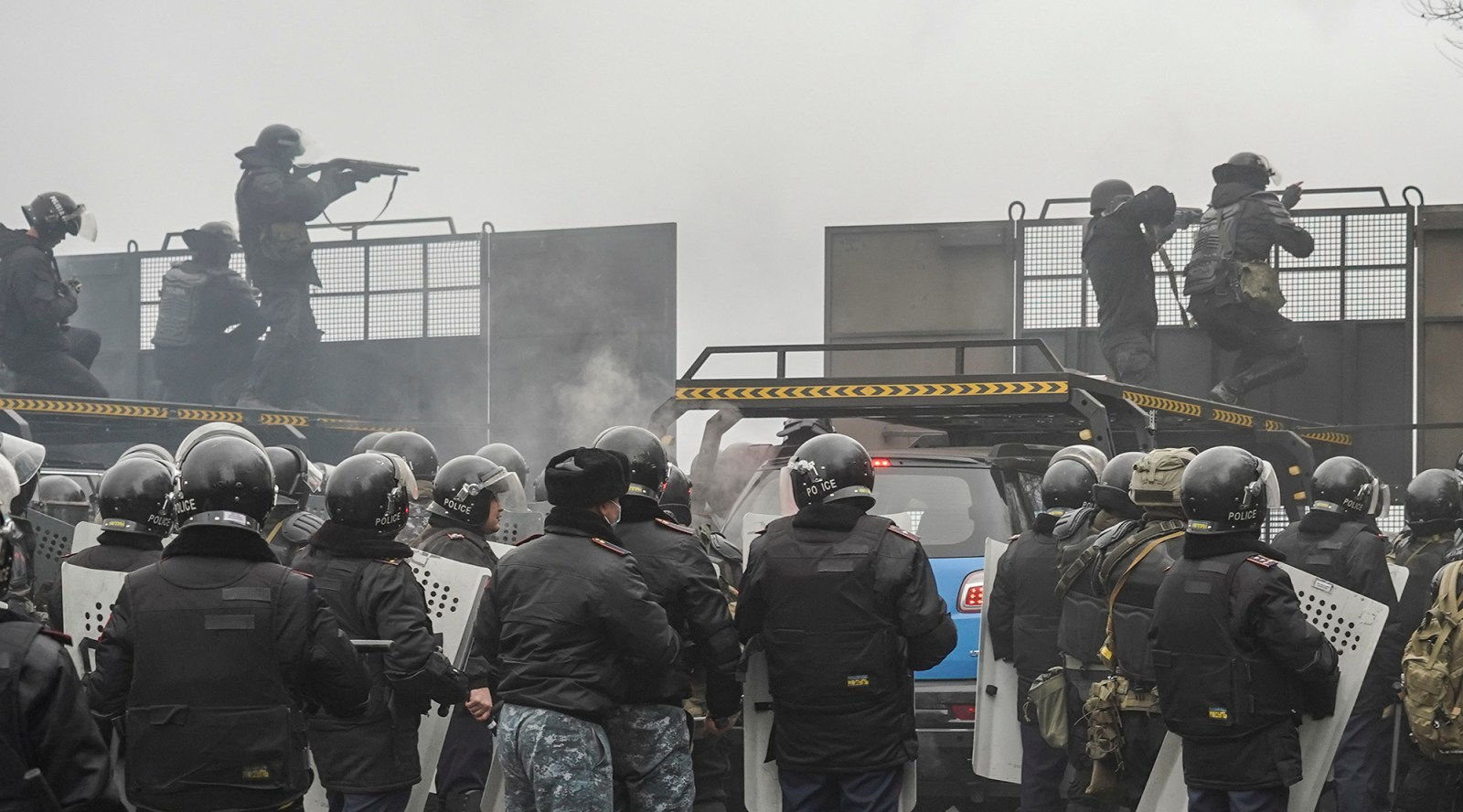 Riot police officers patrol in a street during a rally over a hike in energy prices in Almaty, Kazakhstan, on 5 January 2022. Protesters stormed the mayor's office in Almaty, as Kazakh President Kassym-Jomart Tokayev declared a state of emergency in the capital until 19 January 2022. (Photo: EPA-EFE / STR)

The protests, which rapidly spread across the country after starting over local grievances about rising fuel prices, drew thousands and brought calls for longtime leader Nursultan Nazarbayev to give up the reins of power.

Kazakh President Kassym-Jomart Tokayev asked Russia and partners in a military alliance for help after anti-government protesters seized official buildings including a major airport in the biggest challenge to the country’s leadership in decades.

A State of Emergency was imposed across the country. Military units fought what Tokayev called “terrorist bands” outside the country’s largest city and former capital, Almaty, where demonstrators had seized the international airport, he said. Authorities later said it had been retaken, Interfax reported.

“Their attack on Kazakhstan must be viewed as an act of aggression,” Tokayev said at a televised late-night meeting of his Security Council, saying he’d appealed to the leaders of the Russian-led Collective Security Treaty Organization (CSTO) for help.

The protests, which rapidly spread across the country after starting over local grievances about rising fuel prices, drew thousands and brought calls for longtime leader Nursultan Nazarbayev to give up the reins of power. Nazarbayev (81) turned over the presidency to Tokayev in 2019 but retains substantial influence in the country’s repressive political system.

There was no immediate public response from the Kremlin to Tokayev’s appeal for help, but the prime minister of Armenia, who chairs the CSTO bloc’s Collective Security Council, said on Facebook he had begun consultations on the issue. Tokayev also spoke by phone with Belarusian leader Alexander Lukashenko, Belta reported.

The instability in a key ally is a test for Russian President Vladimir Putin, who stepped in to support Lukashenko in Belarus after protests broke out there in 2020. He also spoke by phone with the embattled Belarusian leader on Wednesday on the Kazakh crisis, Belta reported. The Russian leader now is involved in high-stakes negotiations with the US and Europe over a simmering conflict on Ukraine.

“The appeal to the CSTO means that Tokayev has lost control,” said Arkady Dubnov, a Moscow-based specialist on central Asia.

In Almaty, both the city hall and the president’s residence were ablaze after protesters stormed the buildings on Wednesday, Interfax reported. Later in the day, authorities said an “anti-terrorist operation” was underway in the city, Tass reported.

Seeking to defuse the crisis, Tokayev accepted his government’s resignation and removed several top security officials on Wednesday. He also said he was taking over as head of the Security Council from Nazarbayev and pledged to stay in the capital “whatever happens”.

The State of Emergency gives Tokayev the power to impose a curfew, ban protests, and restrict internet access to quell the rare show of dissent in central Asia’s biggest oil producer.

There was an internet blackout around the country by Wednesday after a day of mobile internet disruptions and partial restrictions, according to NetBlocks, a London-based monitoring agency.

Kazakhstan’s benchmark stock index fell 3% in Almaty. The tenge weakened and yields on dollar bonds due in July 2045 rose to the highest since May 2020, according to data compiled by Bloomberg.

The Kremlin has regularly condemned street protests in former Soviet states, labelling them attempts by the West to use “colour revolutions” to overthrow governments.

Russia is facing “strategic instability on both flanks and it can’t afford to get distracted,” Alexander Baunov, a senior fellow at the Carnegie Moscow Center, wrote on Facebook. “Just as Russia was encroaching on Ukraine, suddenly there are protests across Kazakhstan, which might need saving.”

State Department spokesperson Ned Price called Kazakhstan a “valued partner” and said the US was following the situation closely.

“We condemn the acts of violence and destruction of property and call for restraint by both the authorities and protestors,” Price said on Wednesday. “We urge all parties to find a peaceful resolution of the State of Emergency.”

Like other countries, Kazakhstan has seen inflation soar and its wealth gap widen during the coronavirus pandemic. Consumer price growth jumped to 8.7% in November, exceeding the central bank’s 6% target.

The country of 19 million people has struggled with price growth and domestic fuel supplies as the global energy crunch made exports more appealing. Kazakhstan produced roughly 1.9 million barrels a day of oil in December. DM