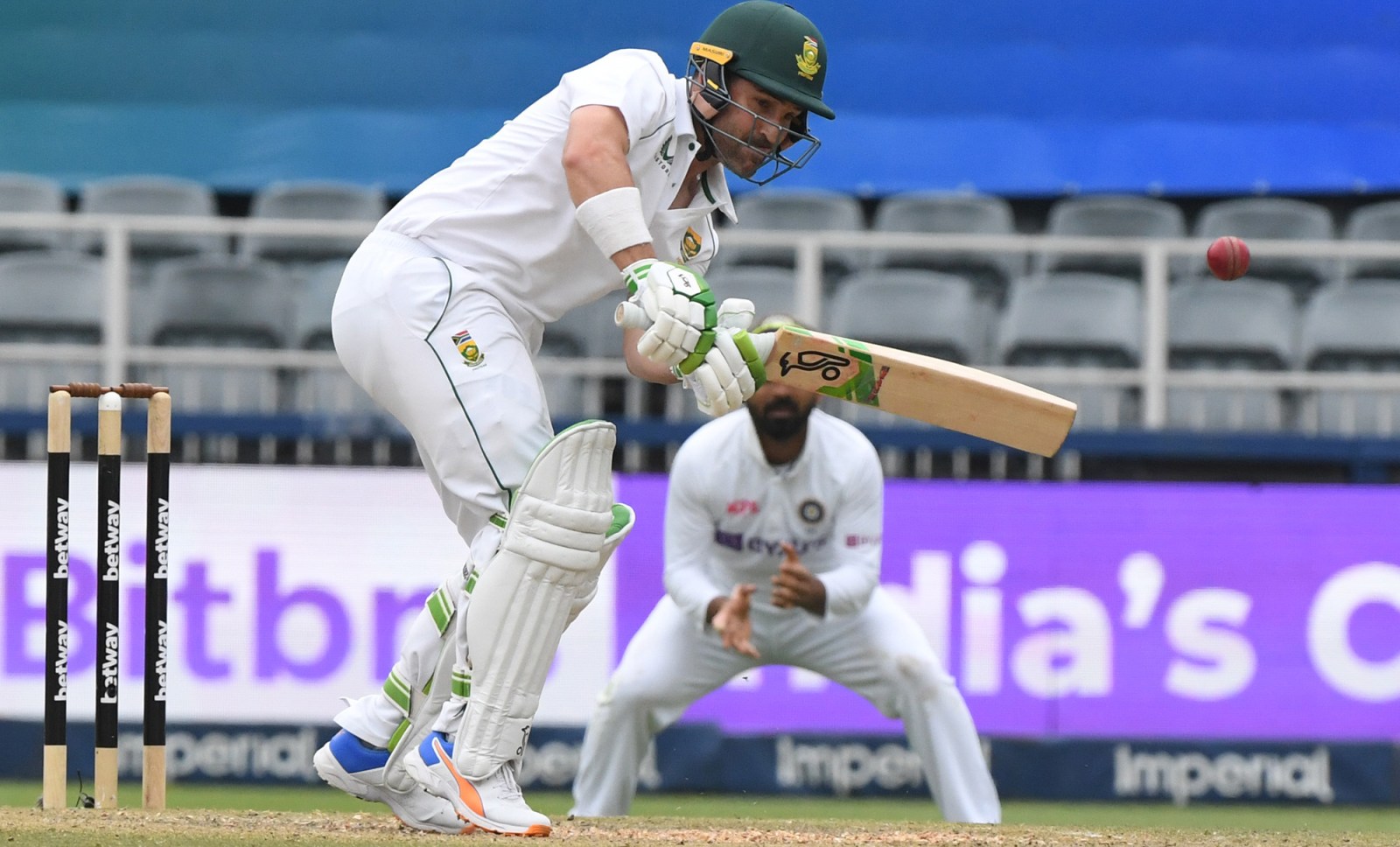 Dean Elgar of South Africa bats South Africa to victory with a gritty 96 not out on day four of the second Test against India at the Wanderers in Johannesburg on 6 January 2022. (Photo: Sydney Seshibedi / Gallo Images)

A mighty innings of sheer bloody-mindedness, unflinching determination and supreme technique and discipline by South Africa skipper Dean Elgar provided the foundation for a much needed and deserved victory by the Proteas over India in the second cricket Test on Thursday.

South Africa achieved their highest run chase at the Wanderers and their first victory over India at the stadium when they claimed a seven-wicket triumph in the gloaming on day four.

Elgar’s 96 not out was as good an innings he has played and the support he received from Aiden Markram (31), Rassie van der Dussen (40) and Temba Bavuma (23 not out) was vital. The Proteas reached the 240-run target when Elgar flicked Ravi Ashwin through midwicket for the match-winning boundary shortly before 6pm.

They reached the target under floodlights after a day under woolly thunderclouds with only three wickets down. Elgar was battered and bruised after a physical assault from India’s excellent seam bowling unit, but he was never beaten.

The Proteas levelled the three-match Test series at 1-1, with a match to play at Newlands next week, setting the stage for a dramatic finale to a compelling series.

India’s final frontier — winning a Test series in South Africa for the first time — will have to wait a little longer. Man for man, the tourists might have the superior team, at least according to statistics, but they are now up against a Proteas side carrying momentum and buoyed by a terrific performance in Johannesburg.

“I don’t know what’s the right or wrong way to win a cricket match, but it’s all about doing the basics right,” Elgar said after the match.

“We ticked a lot of boxes right to make it 1-1. We now go to Cape Town with plenty of confidence. It wasn’t easy, but the batters were determined. But credit to our bowlers, the effort they put in was very impressive.

“When you perform like this over the period of four days, it does make you forget the pain in doing so. We have struggled to find the right batting line-up, find the people for the right roles, entrust the people to do their roles and to bat in such a way in difficult conditions. This result pleases you a lot.”

Despite the delay to the start of day four, with the Proteas needing 122 for victory with eight wickets in hand, the home team played with determination, skill and courage to secure a historic victory.

The showers eventually passed as the teams took to the field at 3.45. Elgar and Van der Dussen dug in to get the score into two digits with an excellent 82-run partnership on a tough Wanderers wicket.

Van der Dussen was eventually dismissed, off the bowling of Mohammed Shami, caught at first slip by Cheteshwar Pujara, after playing an important innings in the context of his career as well as the match.

In stepped Bavuma, and the vice-captain with captain Elgar struck a 68-run partnership off only 82 deliveries. Bavuma scored 23* off 45 deliveries, striking three fours, while Elgar batted for 309 minutes in his mammoth innings, facing 188 deliveries and striking 10 boundaries.

The Test match started dramatically when it was announced that Indian captain Virat Kohli would not play due to a reported back spasm. The captaincy duties were taken over by first Test man-of-the-match KL Rahul.

Left-arm quick Marco Jansen was the standout bowler for the Proteas in the first innings, with a spectacular haul of 4-31.

Stand-in skipper Rahul was the only Indian batter to pass the half-century mark, as he struck 50 runs, with nine boundaries, as India were dismissed for 202 on the first day.

South Africa’s first batting innings was a coming-of-age moment for the immensely talented Keegan Petersen, on day two, as the elegant stroke-maker scored his first Test match half-century in his fourth Test match, going on to top-score for the hosts with 62 off 118 deliveries, striking nine boundaries in the process.

An injury at the end of day one to Mohammed Siraj meant that skipper Rahul had to throw the ball to Shardul Thakur earlier than perhaps planned. It was an inspired toss to the medium-fast bowler, who picked up career-best figures of seven for 61.

Bavuma continued his free-flowing scoring from the first Test match as he struck a quickfire 51 off 60 balls, hitting six fours and one boundary six, to help South Africa reach 229 all out and achieve a lead of 27 runs heading into the second innings.

Day three brought about anxious moments for South Africa as Cheteshwar Pujara and Ajinkya Rahane threatened to put on a huge second-innings lead for the Proteas to chase, scoring 111 off 140 balls for the third wicket.

An inspired spell of bowling by Kagiso Rabada broke the partnership as the Proteas spearhead went on to take the wickets of Rahane, Pujara and Rishabh Pant in consecutive overs. The right-arm fast bowler finished with figures of three for 77. Rabada was well supported by Jansen and Lungi Ngidi, who produced figures of three for 67 and three for 43 respectively.

India went on to score 266 all out, setting the Proteas 240 runs to win the Test.

South Africa’s batters contributed throughout, with Elgar and Markram laying a solid foundation of 47 runs for the first wicket before Markram was dismissed leg before by Thakur.

Petersen could not follow his first-innings heroics as the No 3 batter was dismissed for a useful 28 off the bowling of Ashwin.

But day four was dominated by the home team as South Africa completed their highest successful run chase since beating Australia in Perth in 2008, when they chased down 414 for victory. DM