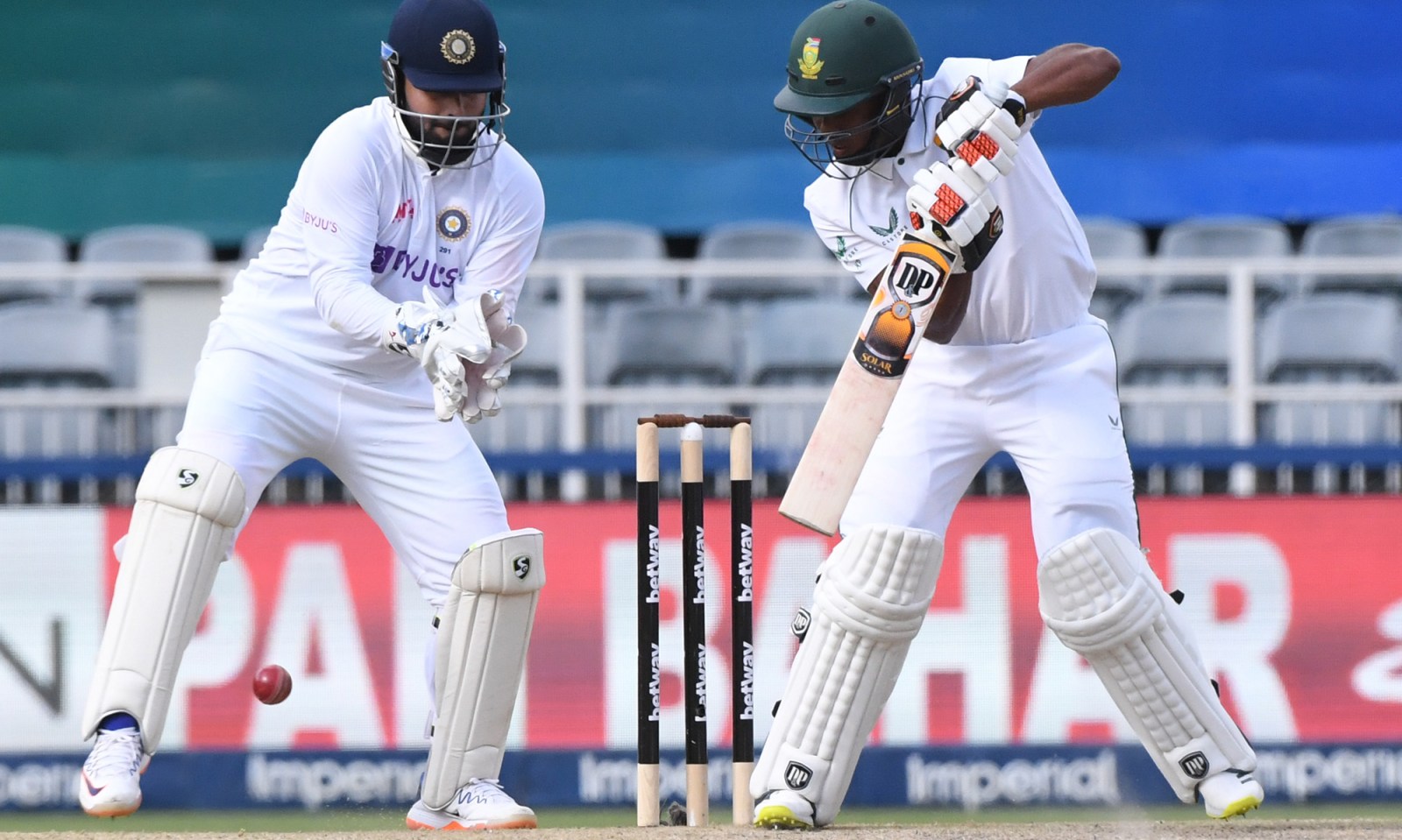 Batter Keegan Petersen of South Africa on day three of the second Test against India at the Wanderers in Johannesburg. (Photo: Sydney Seshibedi / Gallo Images)

The second Test of the three-match series between South Africa and India is tightly poised with the Proteas perhaps slightly ahead, requiring 122 runs to win with eight wickets in hand going into day four.

Despite relentless fast bowling by India’s pace quartet, aided by the world’s best-rated spin bowler, Ravichandran Ashwin, South Africa made it to the end of day three with only two wickets down — and almost halfway to the required victory target of 240.

India resumed their second innings on 85-2 on day three with Cheteshwar Pujara and Ajinkya Rahane well set. The pair got India off to a flying start in the morning session, scoring at nearly six runs an over for the first 10 overs.

Pujara brought up his 32nd Test 50 in the process, a much-needed half-century in the context of his current form. India’s steely No 3 batter brought up the milestone in only 61 balls, striking 10 fours in the knock.

Shortly after, Rahane joined his partner in bringing up a half-century of his own, the 25th of his career, striking eight fours and one six in the innings.

The pair took India’s total from 85 overnight to 155 as they put on a partnership of 111 in only 23 overs, having come together with the score on 44.

Kagiso Rabada stemmed the flood of runs and began a tide of wickets before lunch when he dismissed Rahane, Pujara and Rishabh Pant in consecutive overs. The middle-order batters were dismissed for 58, 53 and zero respectively. Rabada ended the day with solid figures of 3-77.

Lungi Ngidi continued where Rabada left off when he dismissed Ashwin for a quick 16 off 14 balls, Ngidi taking his first wicket of the match.

The bowling hero from day two, Shardul Thakur, struck a rapid 28 runs off 24 balls to put India back on track to produce a substantial lead for South Africa to chase in the last innings. But Thakur went for one big shot too many and was caught on the boundary by Keshav Maharaj off the bowling of Marco Jansen. The tall left-arm quick grabbed three wickets in the innings for 67 runs.

Jansen bowled with hostility and was involved in a fascinating skirmish with India tailender and fellow fast bowler Jasprit Bumrah. Jansen struck Bumrah on the shoulder three times in one over, and an aggressive exchange transpired between the two.

Ngidi eventually grabbed Bumrah’s wicket for seven runs off 14 deliveries, having struck one lusty six off the bowling of Rabada. Ngidi produced figures of 3-46 in the second innings, in a good comeback after the burly fast bowler was unlucky to not take any wickets in the first dig.

Later in the day, it was Proteas skipper Dean Elgar who bore the brunt of Bumrah’s anger when he had the ball in his hands, as he peppered the left-handed opener with a series of hostile deliveries.

Hanuma Vihari batted well with India’s tail, scoring 40 runs off 84 balls and striking six boundaries. This enabled India to put on 266 runs before Ngidi wrapped it up, setting South Africa 240 runs to win the match and level the series 1-1 with one match to go at Newlands.

South Africa started their run chase positively, scoring 34 runs in the seven overs they faced before the tea break and most importantly, both opening batters were still at the crease.

Aiden Markram and Elgar put on 47 runs for the first wicket before Thakur broke the opening stand, dismissing Markram leg before wicket after the ball hit him on the back leg. Hawkeye confirmed that the ball would strike the middle of the middle stump. Markram was dismissed for his highest score in the series so far, 31 off 38 balls, striking six fours.

The dismissal meant Ashwin became the first Indian spin bowler to take a Test match wicket at the Wanderers since Anil Kumble in 2006.

Elgar wore a few blows to the body, including one in the neck off the bowling of Bumrah. Despite this, the Proteas’ captain carried his bat to the close of play, scoring 46 runs off 121 balls, hitting two fours in the process.

The skipper was partnered by Rassie van der Dussen who finished the day on 11 runs off 37 deliveries.

The Wanderers pitch will play a big factor in the result with the variable bounce exacerbated on day three. The grit and determination displayed by Elgar will need to be replicated by the rest of the South African batting line-up if on day four they are to secure their first victory over India at the Wanderers. DM