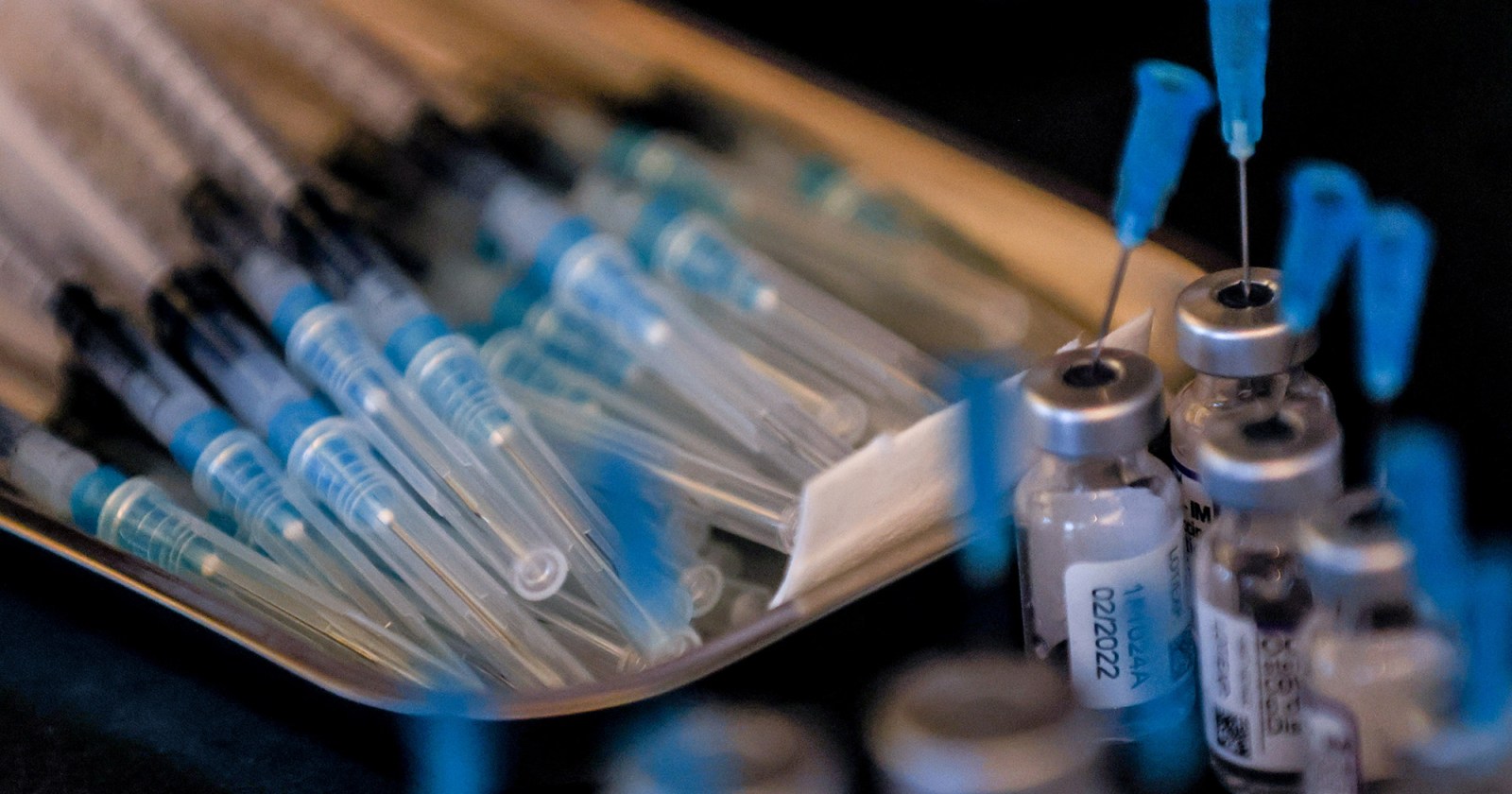 Syringes containing the Moderna vaccine against Covid-19 on display during a vacination campaign in a beach bar and restaurant in Berlin, Germany, on 4 January 2021. (Photo: EPA-EFE / Filip Singer)

US hospitals are so far seeing significantly fewer severe outcomes from the Omicron wave than they saw in past Covid-19 spikes, mirroring the experience of South Africa and the UK. The Omicron variant now accounts for 95% of new sequenced cases in the US.

Pfizer said the US government has agreed to buy an additional 10 million courses of its Covid-19 pill, adding to the country’s stash of virus-fighting tools. American Express delayed its return to US offices.

Maryland Governor Larry Hogan declared a 30-day State of Emergency as he predicted hospitalisations could reach more than 5,000, a 250% increase from a peak reached a year ago.

Hong Kong will ban most unvaccinated people from restaurants, libraries and museums starting next month and require all teachers and school staff to get shots. Hong Kong found one positive preliminary Covid-19 case with an unknown source of infection, health officials said. 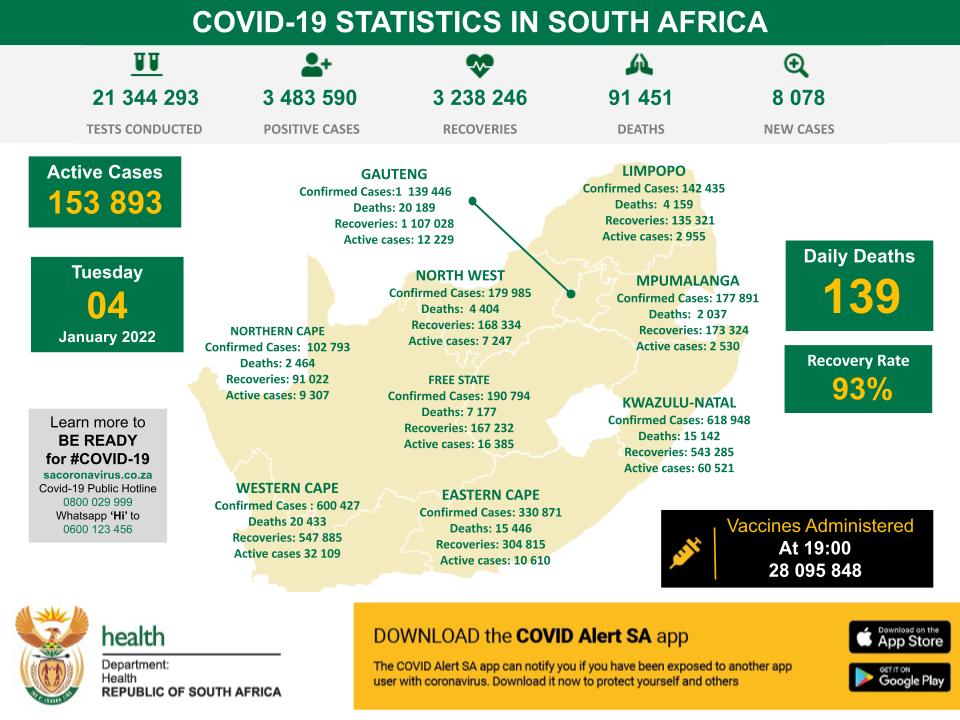 American Express postponed its return to US offices amid a surge in Covid-19 cases linked to the highly contagious Omicron variant.

The New York-based credit card giant will give employees two weeks’ notice before it starts bringing a larger number of staffers back to its offices. The firm had previously said it intended to start bringing back employees beginning on 24 January.

Omicron now 95% of new US cases

The Omicron variant is accounting for the lion’s share of new coronavirus cases as Americans return to work and school after the holiday season, according to estimates from federal health officials.

The US is reporting a weekly average of 485,363 cases, about twice the peak of last winter, and true prevalence is projected to be far higher. But US hospitals have just 64% of the Covid patients in adult intensive-care beds than they did at last winter’s peak, and hospital deaths with Covid are around 52% of last winter’s worst period.

US hospitals are so far seeing significantly fewer severe outcomes from the Omicron wave than they saw in past Covid-19 spikes, mirroring the experience of South Africa and the UK. Even New York, the uber-dense site of one of the nation’s worst outbreaks, is seeing similar results.

The Republican governor and the state’s surgeon-general, Joseph Ladapo, criticised what they see as over-testing, such as for those seeking to engage in social events or for children to return to in-person education.

Pfizer in pact with US for more pill courses

Pfizer said the US government has agreed to buy an additional 10 million courses of its Covid-19 pill, adding to the country’s stash of virus-fighting tools.

The Greek government reached an agreement with the country’s association of private clinics to use 10% to 15% of their ordinary beds for managing Covid patients when needed, Health Minister Athanasios Plevris said. Greece reported 50,126 new coronavirus cases on Tuesday, the highest daily increase since the start of the pandemic. Despite the jump, the country’s schools will reopen as scheduled on 10 January with stricter testing protocols.

Maryland Governor Larry Hogan declared a 30-day State of Emergency as he predicted hospitalisations could reach more than 5,000, a 250% increase from a peak reached a year ago.

The next four to six weeks “will be the most challenging time of the entire pandemic”, Hogan said on Tuesday at a virus briefing.

Hogan announced several actions to deal with the crisis, including giving the state’s health department the authority to direct and expedite transfer of patients; establishing alternative care facilities; allowing inactive healthcare practitioners to help without having to renew their licences; authorising graduate nurses to provide full nursing services; and activating 1,000 members of the Maryland National Guard to assist.

The Centers for Disease Control and Prevention recommended that people get a booster shot with the Pfizer-BioNTech vaccine five months after their first two shots, shortening the interval from the previous six-month regimen.

The new recommendation comes one day after the US Food and Drug Administration changed its emergency authorisation for the shot to reflect a shorter dosing interval for the booster.

Germany has eased travel from the UK and South Africa by dropping them from its list of so-called areas of variants of concern.

Vaccinated travellers from those countries will no longer need to quarantine in Germany if they can show a negative test result before arrival.

The move comes as total suspected and confirmed cases of the Omicron variant rose by 17% to 35,529 cases.

Giorgio Armani has cancelled January’s shows in Milan and the Paris fashion weeks due to increasing infection rates in Europe, the Italian company said in a statement on Tuesday.

The move was made “with great regret” because the shows are considered “crucial and irreplaceable occasions”, the fashion house said in the release. Valentino’s Vintage campaign has also been moved from January to April, the Italian company said in a separate statement.

The World Health Organization said it has been monitoring a new coronavirus variant with atypical mutations that was identified in 12 people in the southern Alps of France since November.

The variant, called B.1.640, has had a lot of time and opportunity to expand, though it hasn’t picked up as much as other mutations, according to Abdi Mahamud, a WHO incident manager on Covid.

Ireland’s government is under pressure to delay reopening schools following the Christmas break to contain one of the world’s worst outbreaks of Covid-19.

The country’s contagion rate rose to almost 2,500 cases per 100,000 people over the past seven days — the highest in Europe as of Monday.

The recommendations include requiring citizens to show vaccine certificates to dine in restaurants, wear masks outdoors and avoid social and religious gatherings.

The number of Covid-19 cases in Indonesia surged to 299 in a 24-hour period, the highest addition since 2 December 2021, according to health ministry data. Southeast Asia’s biggest economy has recorded nearly 4.3 million confirmed cases since the start of the pandemic. Its confirmed Omicron cases more than doubled to 152 in the past month.

The government on Monday shortened the mandatory quarantine period for travellers arriving from heavily infected nations to seven days from 10, but added more into its “red list” of riskier countries of origin.

Government staff will shift to work from home, while private companies have been told to ensure no more than 50% of employees come to the office, New Delhi’s deputy chief minister Manish Sisodia said.

New Delhi’s virus cases surged to 11,000 in the past 10 days and people should only leave their homes for urgent matters, while masks have been made compulsory in public transport, according to officials

Roughly 1.06 million cases were diagnosed in the US on Monday as of midnight New York time, according to Johns Hopkins University data. The tally may fluctuate as more data is entered.

That’s more than any country has ever reported since the pandemic began more than two years ago and comes after the recent record of about 590,000 cases was itself a doubling from the prior week.

The stratospheric numbers come even as many Americans rely on tests they take at home, with results that aren’t reported to authorities. That means that the record is likely to be a significant underestimate.

Taiwan to tighten some curbs

Taiwan said it found four locally transmitted cases of coronavirus, with one having been confirmed as infected with the Omicron variant. It also found 30 more imported cases.

The government will strengthen controls at Taoyuan, home of the island’s main international airport, Health Minister Chen Shih-chung said at a briefing. Masks can only be removed outdoors at Taoyuan for dining, he said.

Thailand aims to treat Covid-19 as endemic in 2022 by resuming normal activity, increasing immunisation through booster shots and reducing hospitalisations, Opas Karnkawinpong, director-general of the Department of Disease Control, said on Tuesday in Bangkok.

Cases have dropped to a six-month low amid curbs on mobility and businesses and a ramp-up in vaccinations. The country reported 3,091 new cases and 12 deaths on Tuesday, taking the cumulative caseload to 2.2 million. About 10% of its 72 million residents have received a third dose, and about 64% have received at least two shots.

The “living with endemic Covid” strategy marks a shift from its “zero-Covid” approach in 2020, and “learning to live with Covid” blueprint last year, which saw the tourism-reliant economy reopen its borders to foreign visitors.

Almost two weeks of lockdown is starting to wear on the residents of Xi’an, the western city at the centre of the longest outbreak of Covid-19 in China since the virus was first detected.

Shortages of food and medical care have worsened in the past 12 days since officials sealed off the city of 13 million people to stymie a flare-up that has already led to more than 1,600 infections. More posts are starting to emerge on Chinese social media criticising the government’s poor management and complaining that access to food is extremely limited.

The outbreak appears to have spread from Xi’an, which reported 95 new cases on Tuesday. The eastern province of Zhejiang and central province of Henan reported eight and five cases respectively, while another 21 asymptomatic infections were detected countrywide and counted separately.

Hong Kong Chief Executive Carrie Lam announced a vaccine requirement for restaurants and public leisure facilities will be imposed from 24 February. That’s later than initially planned, with the government having delayed the start of the restrictions to after the Lunar New Year holidays, when families gather in homes and restaurants across the city.

Lam said the delay was needed so businesses can prepare, and to give the city time to roll out vaccines to the roughly one million people who haven’t yet had a first dose. “We can’t possibly ask them to make all the required preparations within a very short time because they have to make big changes with their facilities,” she said of the catering sector.

Private workplaces and shopping malls are exempt from the mandate.

Arvind Kejriwal, Delhi’s chief minister, tested positive with mild symptoms as a wave of infections continues to strengthen across the country. India confirmed 1,892 Omicron cases on Tuesday and 124 more deaths, taking the total tally of Covid-related fatalities to 482,017.

More than 9.9 million vaccines were administered in the previous 24 hours, according to federal health ministry data. This included four million doses to teens aged between 15 and 18. DM