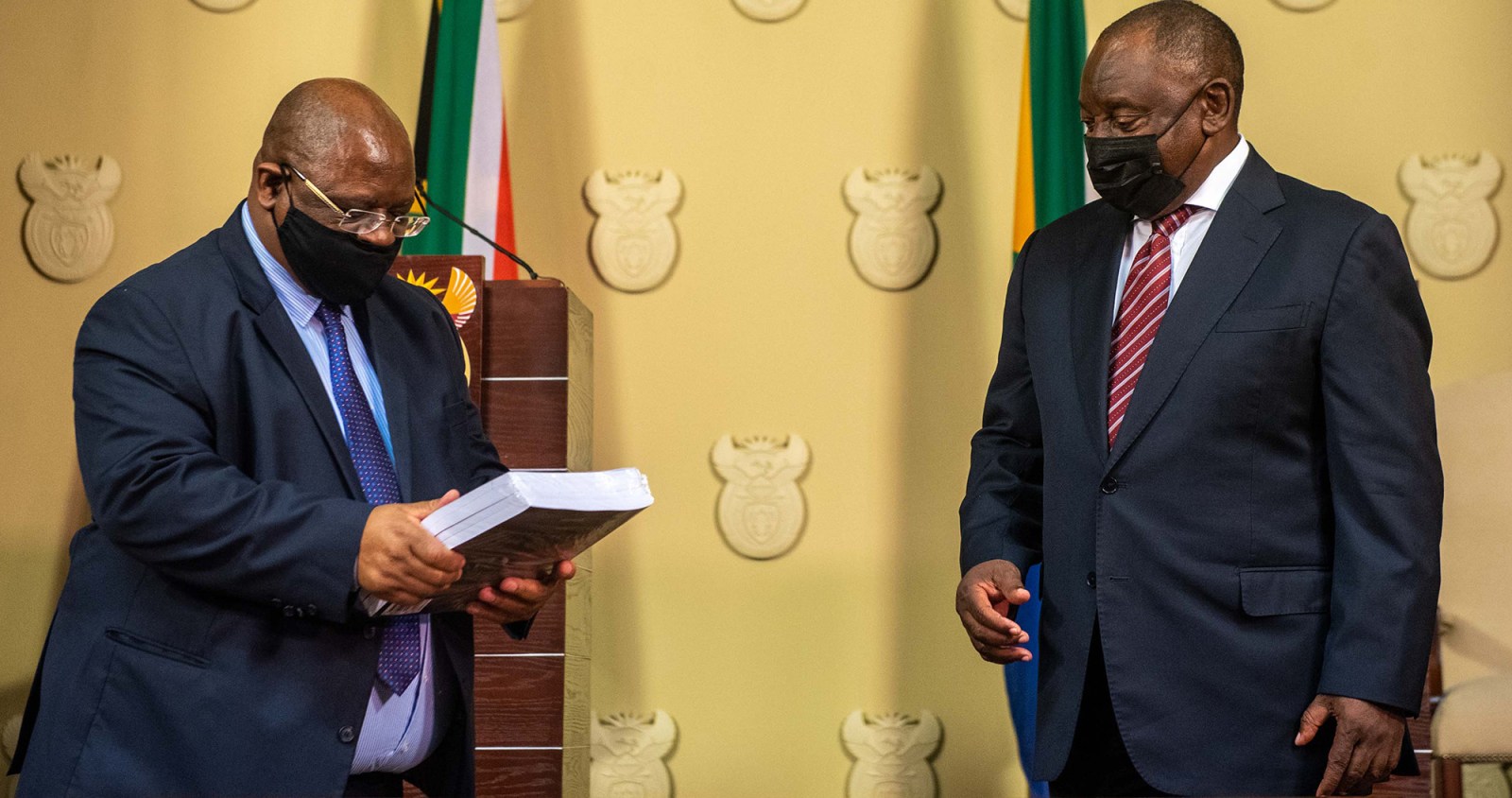 President Cyril Ramaphosa (right) receives the first part of the report of the Judicial Commission of Inquiry into Allegations of State Capture from the commission’s chairperson, acting Chief Justice Raymond Zondo, on Tuesday, 4 January 2022 at the Union Buildings in Pretoria. The commission’s final report will be submitted to the president in three parts. The second part is expected to be handed over at the end of January 2022, and the final part at the end of February 2022. (Photo: Alet Pretorius)

The Zondo Commission has described the link between corruption and political party funding as an ‘existential threat to our democracy’ and recommended establishing a new anti-corruption body free of political oversight.

Mechanisms will be put in place by the ANC’s National Executive Committee (NEC) to deal with the parts of the State Capture Inquiry report that are about the ANC and its leaders, public representatives or members, the party has said.

This comes as the first part of acting Chief Justice Raymond Zondo’s report warned that “there is alarming evidence” that political parties were being financed through the granting of corrupt tenders. He found “at least two instances” of the proceeds of corruption from high-value contracts being diverted to the ANC.

ANC spokesperson Pule Mabe released a statement soon after Zondo handed over Part One of his three-part report from the State Capture Inquiry, over which he presided, to President Cyril Ramaphosa late on Tuesday afternoon.

Mabe said the governing party knew it “would itself be placed under great scrutiny” when it called for the establishment of the commission, something which Ramaphosa mentioned during his testimony before the commission.

“The ANC will engage with the findings and recommendations of the commission as the parts of the report become available, and consider how these can help to enhance the process of fundamental renewal and rebuilding within our movement,” Mabe said.

He said the ANC felt that the commission was “a necessary part of the broader social effort to end all forms of State Capture and corruption”.

Although this is the dominant view of the party’s NEC, not everyone in the party supported the commission’s work. After initial testimony, former president Jacob Zuma refused to return to testify before the commission, and his defiance of a Constitutional Court order to do so landed him in jail.

Large-scale looting, arson and riots in KwaZulu-Natal and Gauteng broke out days after he was incarcerated.

In the first part of the commission’s report, Zondo highlighted a number of issues with party political funding to the ANC under the heading “The Consequences of State Capture and Systemic Weaknesses”. According to the report, evidence before the commission established a link between the corrupt granting of tenders and political party funding.

Zondo warned: “Such a link can represent an existential threat to our democracy. It is inconceivable that political parties should finance themselves from the proceeds of crime, and yet there is alarming evidence to that effect.”

He mentioned two examples, the first of which involved the late Johannesburg mayor Geoff Makhubo using a front company to solicit money from a contractor, EOH. Makhubo requested a R50-million donation from EOH for the ANC’s 2016 local government election campaign.

The other example involved the Free State government’s dealings with Blackhead Consulting, which received “a number of lucrative contracts including a 2014 asbestos audit tender valued at R255-million”. Blackhead paid the ANC millions of rands between 2013 and 2018.

Suspended ANC Secretary-General Ace Magashule, who was Free State premier at the time, is facing charges in relation to the asbestos tender.

Zondo went on to mention the now-defunct security company Bosasa as a third example, saying it got tenders over the years from various government departments or entities, including Correctional Services, Home Affairs and the Airports Company of SA, and made donations to the ANC in cash and in kind.

“It cannot be that it only gave the ANC ‘clean’ money or that it did not spend ‘dirty’ money on the ANC,” he said.

“Thus far the National Assembly has been tentative in addressing this problem,” he said.

The report recommended that the act goes further “to prohibit donations linked to the grant of tenders”, whether the donations are made to the party directly into its coffers or indirectly.

He said there should be “significant monetary penalties” on both the tenderer and the political party found to have transgressed this.

Zondo warned that the state cannot be trusted in leading the fight against corruption, and recommended the setting up of an “anti-corruption body free from political oversight”, adding that the Hawks themselves “may have been captured”.

The commission also made public minutes of the ANC’s cadre deployment meetings, dating back to 2018, after Ramaphosa had already relinquished his position as deployment committee chairperson to become party president.

Following a successful application under the Promotion of Access to Information Act, DA MP Leon Schreiber said the minutes that were made available show that the ANC’s cadre deployment committee “interfered in the appointment [process]” of at least 96 different government departments, agencies and the boards of state-owned enterprises between 3 December 2018 and 17 May 2021.

In some cases applications were made directly to the ANC’s deployment committee — something Schreiber described as making “a complete mockery of the state’s own appointment process”. DM