A CONTINENT IN TROUBLE

Africa ventures tentatively into 2022 with huge economic and political challenges 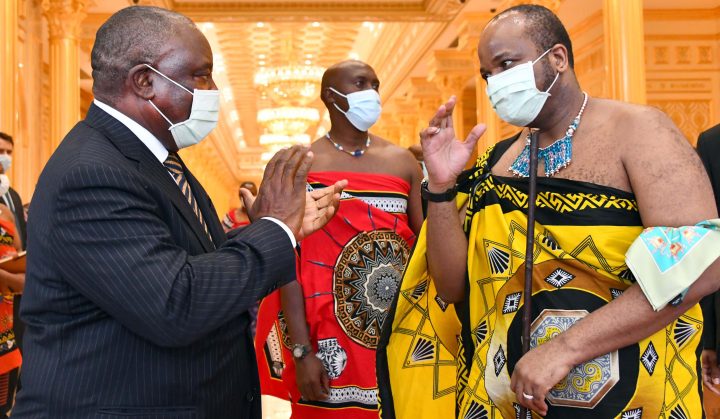 President Cyril Ramaphosa said on 2 November 2021 after a meeting that he and King Mswati III had agreed that SADC’s Secretariat would work closely with the Eswatini government to draft the terms of reference for a national dialogue forum. (Photo: Elmond Jiyane / GCIS)

Africa enters 2022 tentatively, with the prospect of a slight economic recovery from the shocks of Covid-19, but also huge political challenges in trying to correct and repair serious setbacks to peace and democracy.

Arresting a continuing civil war in Ethiopia, battling to keep violent and determined Islamist extremists at bay in the Sahel, Somalia, eastern Democratic Republic of Congo, Uganda and Mozambique; resuscitating a strangled democratic transition in Sudan; holding together a fragile peace in Libya; reversing coups in Guinea, Mali and Chad; and trying to introduce democracy to Eswatini are just some of the more pressing items on the continent’s political to-do list next year.

The year will tell whether southern Africa can decisively eliminate the Islamic State-affiliated insurgency in Mozambique’s northernmost Cabo Delgado province – or will get bogged down in an Afghanistan-like endless low-level conflict.

In July the Southern African Development Community (SADC) sent its standby military force to try to defeat and expel the jihadists who have terrorised the province since October 2017. South Africa has so far deployed only about 300 special forces in the SADC Mission in Mozambique (Samim), which seems to have left most of the fighting to the 2,500 Rwandan troops Mozambican President Filipe Nyusi also invited into the country in July.

The Rwandan troops expelled the insurgents from their main base in Mocimboa da Praia and they and Samim have won a few other battles. But the insurgents may well have just melted into the bush to fight another day.

South Africa seems to be poised to send in larger numbers of infantry to try to consolidate Samim and Rwanda’s gains.

Early in the year President Ramaphosa – wearing his hat as chairperson of the security organ of the SADC – will attempt to start the long-deferred national political dialogue in Eswatini to avert further violent clashes between pro-democracy protesters and security forces like those of this year. Transforming King Mswati III from an absolute to a constitutional monarch is clearly the answer to the crisis, but whether he and an entrenched and prosperous royal establishment can be persuaded to surrender political power and economic privilege is uncertain.

Ramaphosa may see another one of his nearby personal responsibilities blowing up in his face as the perennial political rumbling in Lesotho could erupt again. The country has appeared relatively stable since Moeketsi Majoro succeeded the controversial Tom Thabane as prime minister in May last year. But Thabane’s determination to retain leadership of the All Basotho Convention (ABC) the leading party in the fragile governing coalition, is threatening to rip Majoro’s government apart – even before elections set for about September. Ramaphosa has been SADC’s special envoy there since an aborted coup in August 2014 and political and military assassinations rocked the tiny mountain kingdom.

In Angola President Joao Lourenço and the ruling MPLA face re-election this year. The president started well, after replacing long-time President Jose Eduardo dos Santos in 2017, by prosecuting corruption and expanding political space. But falling oil prices and an opposition political coalition may make for a tough electoral contest.

Further afield, in Kenya, Uhuru Kenyatta must step down after two terms as president and the main electoral contest in August is expected to be between vice-president William Ruto and the perennial challenger Raila Odinga. Many observers are concerned about candidates mobilising support on the basis of ethnicity, as in the past, possibly stoking inter-communal violence.

In Sudan, democrats will battle – and many will probably die on the streets – in 2022 to try to save their once-promising but now imperilled transition to civilian democratic rule, which began after long-time dictator Omar al-Bashir was ousted in April 2019.

Tunisian democrats will also fight to try to rescue the only surviving democracy of  the 2011 Arab Spring, after elected President Kais Saied suspended the government in July and began to rule by decree. Saied – ironically, a professor of constitutional law – has also made a dubious promise to return Tunisia to constitutional rule.

Libya is due to hold presidential elections on 24 December and legislative elections in January, as the culmination of protracted political negotiations to try to end a civil war that has raged on and off since longtime dictator Muammar Gaddafi was toppled and killed in 2011 by a popular revolt, greatly assisted by Nato-led air attacks.

The election, though, remains uncertain and its benefits for Libya’s future welfare very dubious. It seems to have been hijacked by acquisitive interests, with the presidential candidates including the likes of Saif al-Islam Gaddafi, son of the deposed Brother Leader.

Economically, Africa is slowly recovering from the 2020 shock and the sharp contraction caused by global and local lockdowns imposed to try to contain the Covid-19 pandemic. The International Monetary Fund (IMF) has forecast sub-Sahara’s economy will expand by 3.7% in 2021 and 3.8% in 2022.

And it predicts North Africa’s economies will grow by an average of 4.1%.

It said the rebound was primarily the result of better harvests and a favourable external environment, including a sharp improvement in trade and commodity prices. “Yet, the outlook remains highly uncertain as the recovery depends on the progress in the fight against Covid-19 and is vulnerable to disruptions in global activity and financial markets,” the IMF said in its latest Regional Economic Outlook for Sub-Saharan Africa.

It added that sub-Saharan Africa’s recovery would be the lowest of any region, largely because of much lower vaccination rates and much smaller fiscal resources to refloat economies than other regions.

Only 7% of Africans had been completely vaccinated by this week, according to the Africa Centres for Disease Control and Prevention (Africa CDC), far short of the 70% plus it had earlier said would be needed to attain herd immunity. A far greater global effort is needed to vaccinate Africans, as the IMF said – not least to prevent new Covid-19 variants breeding in unvaccinated bodies.

The IMF noted that North African economies were likely to bounce back further, largely because of their higher vaccination rates and greater stimulus packages. The Africa CDC, for example, says Morocco has vaccinated 92.38% of its population; Tunisia, 50.02%; Egypt, 40.78%; Algeria, 25.96%; and Libya, 24.33%.

All African economies were supposed to have been lifted this year by the official start of trading through the ambitious African Continental Free Trade Area (AfCFTA)  on 1 January 2021. But that hasn’t happened yet for a number of reasons, including unrealistic expectations and tougher than predicted negotiations over trade concessions and trading rules. AfCFTA secretary-general Wamkele Mene recently forecast that trading would start “early next year”.

If the trade deal delivers on all it promises, it could be a big shot in the arm for African economies – but not in 2022. Its benefits will take much longer to kick in. DM168