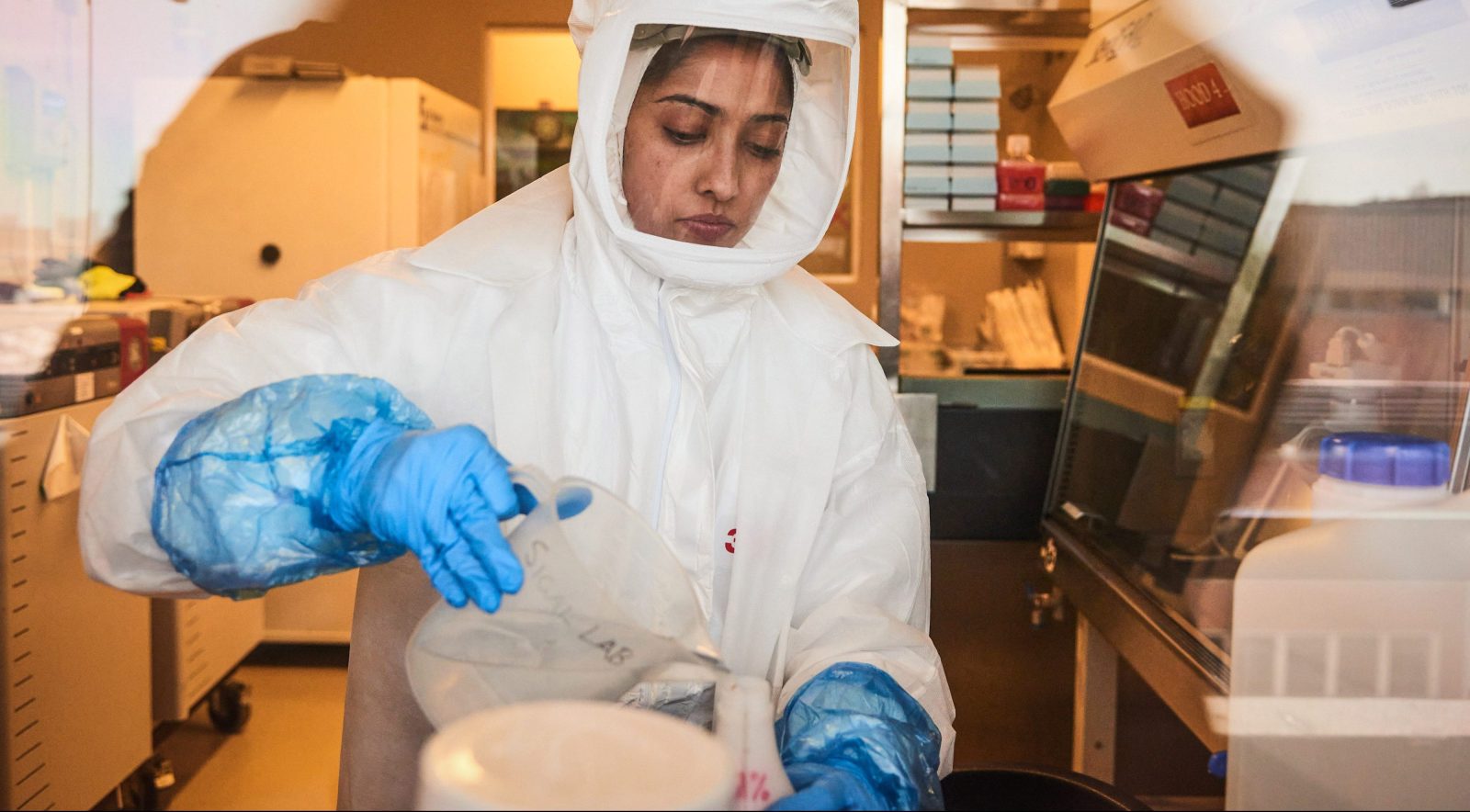 On Wall Street, Goldman Sachs Group Inc. changed tack and is now asking U.S. employees to work from home if they can until Jan. 18.

Across the Atlantic, the U.K. is worried by the number of health workers on sick leave as the Omicron variant spreads, while the Financial Times reported Boris Johnson’s government will develop contingency plans to help avoid supply chain disruptions from staff absences.

Israel will start offering a fourth vaccine dose to people older than 60 as the Omicron strain has caused a surge in new cases in the country. 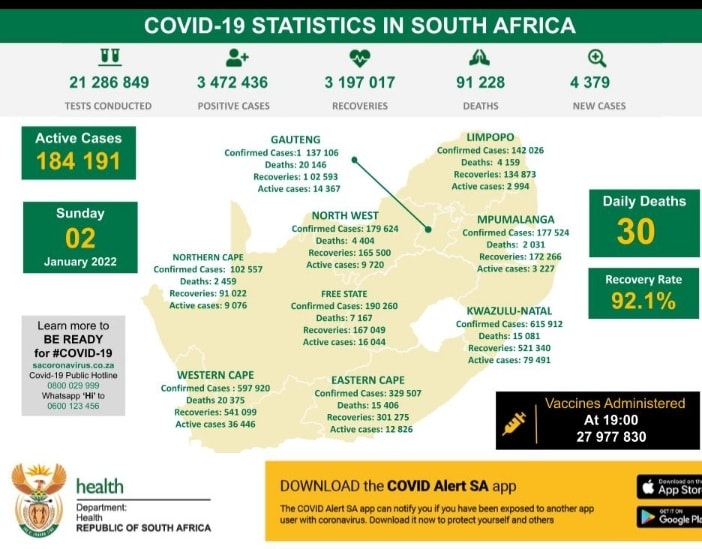 Israel will start offering a fourth vaccine dose to people older than 60 as the Omicron strain has caused a surge in new cases in the country.

The fourth dose will also be made available to medical staff for whom at least 4 months have passed since their last jab, Prime Minister Naftali Bennett said in a press conference on Sunday. Last week, Israel approved the extra shot for people who are immunocompromised, as well as residents of nursing homes, and patients at geriatric hospitals.

Israel expects new coronavirus cases to climb to tens of thousands per day soon, Bennett said at the opening of a Cabinet meeting on Sunday.

“It’s our next move and decision,” Adams said of boosters on ABC’s “This Week” on his second day in office. “If we feel we have to get to the place of making that mandatory, we’re willing to do that.”

Asked whether the city should test the roughly one million students before public schools resume on Monday, Adams said it’s a “great idea” but that he’s deferring to Governor Kathy Hochul’s plan to only test kids after they’ve been exposed to classroom Covid-19 cases.

Fauci says testing may be added to isolation rule

The U.S. Centers for Disease Control is considering adding a negative test to recommendations on a shortened isolation period for people with asymptomatic infections, President Joe Biden’s chief medical adviser said on ABC’s “This Week.”

A testing requirement may be added to last week’s move by the U.S. to shorten the isolation period for some people who test positive for Covid-19, Anthony Fauci said.

Last week, U.S. health officials cut the recommended isolation time to five days from 10 after a positive test. Fauci acknowledged “pushback” to the shortened span without any further test that might indicate if a person is still infected.

“We’re going to be hearing more about that in the next day or so from the CDC,” he said on ABC.

Twitter Inc. on Sunday said it permanently banned the personal account of Republican Representative Marjorie Taylor Greene for repeated violations of the platform’s prohibition against spreading misinformation about Covid-19.

The Georgia legislator was previously suspended for tweeting false claims about the Covid vaccine and health risks during the global pandemic. A tweet Saturday misrepresented data on the death rate from the vaccine, a company spokesman said.

Goldman Sachs, one of Wall Street’s fiercest champions of returning its staff to offices, is asking U.S. employees to work from home if they can until Jan. 18.

Goldman’s reversal comes after most of its major peers, including JPMorgan Chase and Citigroup, adopted a more cautious stance.

“As we continue to monitor the trajectory of this spike, we now encourage those who can work effectively from home to do so,” Goldman said Sunday in a memo.

England has no plans to cut isolation period

Health Minister Edward Argar, who oversees virus policy for England, ruled out cutting the number of days an infected person must isolate from seven to five.

“We haven’t had scientific advice to cut that at this point,” he told Times Radio.

Hospitalisation data are showing a rise in the number of people over 60 in the hospital, he added.

However, “I’m seeing nothing at the moment in the data in front of me, in the immediate situation, that suggests a need for further restrictions,” he said.

There are 9,353 coronavirus patients hospitalised in South Africa, of which 7.8% are in intensive-care units, according to data from the National Institute for Communicable Diseases. That’s a slight decrease from the 9,378 patients a day earlier. Of the 733 people in ICU, 310 are on ventilators, the data show.

Bulgaria reported its first 12 Omicron cases on Sunday. No one has been hospitalised. The Balkan country is the EU’s least vaccinated, with less than 30% of the population having two doses. When adjusted for population, it also has one of the world’s worst mortality rates from the virus since the beginning of the pandemic, according to John Hopkins University data.

Soccer star Lionel Messi tested positive for Covid-19 and is isolating, his Paris Saint-Germain team said. “Leo Messi has been in regular contact with our medical team and when he is negative he will travel to France,” PSG coach Mauricio Pochettino said in his weekly press conference. “Until he gets a negative test in Argentina he won’t be able to travel to France.”

Hundreds of Dutch protesters gathered in Amsterdam to demonstrate against coronavirus measures, even as the city banned the event, citing public health risks. “The organisation is not prepared to cooperate in a safe and orderly course and has announced that it wants to seek confrontation and break the rules,” the municipality said on its website on Thursday.

The protesters circumvented the ban by changing the stated purpose of their gathering to “drinking coffee”, according to news agency ANP. The gathering place on Amsterdam’s Museumplein has been declared a “security risk area” until 11 p.m. in case the protest turns violent, ANP reported.

The Dutch government announced a stricter lockdown in December to stem the spread of the Omicron variant. The so-called full lockdown, which will last until at least Jan. 14, allows only supermarkets and essential shops to stay open. Cases, hospitalisations and deaths have all fallen in the past month.

Covid-related absences among hospital staff in the U.K. jumped nearly two thirds in the post-Christmas period, the Times reported, citing NHS data. Regionally, the situation is even worse, with parts of one London hospital closed because half of the nursing staff were off sick, the paper reported. Health service staff have also faced difficulty accessing Covid-19 tests.

Government ministers are reported to be testing emergency contingency plans to minimise disruption to hospitals and other public services. Public sector leaders were told to plan for a worst-case scenario of 25% of staff being absent, the reports said.

The U.K. Health Security Agency argued in a blog post that easing the rules on self-isolation and allowing people back to work after five days instead of the current seven would worsen the situation. Its modeling showed as many as a third of people would still be infectious six days after a positive test.

Russia reported the lowest level of cases since the middle of September. There were 18,233 new cases in the past day, according to the government’s reporting center. The number of deaths declined to 811, the lowest in more than three months.

Singapore reported more Covid-19 infections among travellers from abroad than local cases for the first time in nearly half a year, testing the resolve of the country to keep its borders open amid the spread of the Omicron variant.

There were 260 imported cases reported as of noon on Jan. 1, compared with 187 community infections, according to data released by the Health Ministry. The last time Covid-19 cases among travellers surpassed local infections was on July 12.

While Singapore has chosen to freeze ticket sales via its vaccinated travel lanes until late January, the business hub’s decision to maintain quarantine-free travel for vaccinated people from several countries, including Omicron hotspots such as the U.K. and U.S., is increasingly being tested. Other nations including Thailand halted quarantine-free entry to prevent the spread of the new variant.

The U.K. government will develop contingency plans to help companies and supply chains avoid disruptions from staff absences due to Covid-19, the Financial Times reported, citing the Cabinet Office.

The government has identified a range of staff-support measures, including former teachers for schools and volunteers in the public sector, the newspaper said. It has asked private businesses to test the plans against a worst-case scenario of as much as 25% in workforce absences, according to the report.

U.K. Cabinet Office Minister Steve Barclay will lead regular meetings to monitor the impact of the Omicron variant on workforces and company operations, the FT reported.

Germany recorded 12,515 new cases, less than half the 26,392 of the day before, according to the country’s public health authority RKI. Reported new deaths associated with the virus rose by 46, bringing the total to 112,155. DM