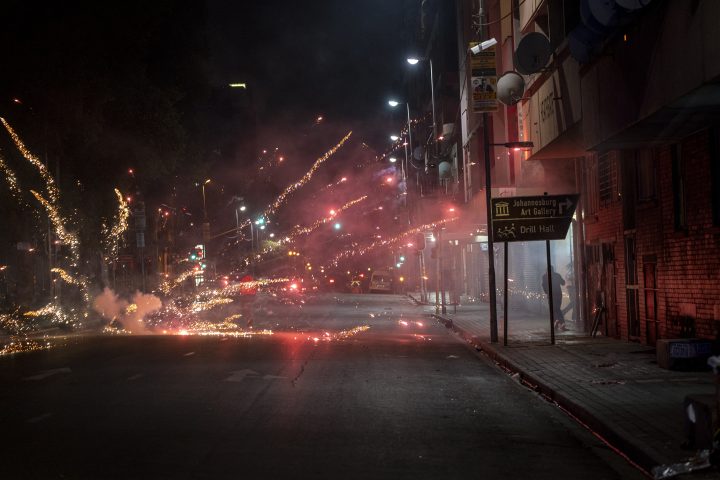 Instead of the fireworks soaring into the sky it detonated on the street. Photo: Shiraaz Mohamed.

Johannesburg law and emergency services were on high alert this weekend following the announcement of the lifting of the curfew and other restrictions. Expecting the worst they were out in full force. However, Hillbrow residents proved them wrong with very few incidents reported. Shiraaz Mohamed spent Friday and Saturday in Hillbrow, documenting the residents’ celebrations and authorities’ efforts to keep matters calm.

Police had started conducting raids in Hillbrow earlier on Friday and by late afternoon the Hillbrow police station was a hive of activity with policemen and women from other stations arriving to assist with the raids. The raids were aimed at confiscating alcohol from unlicensed outlets. Outside the charge office, police offloaded confiscated crates of beer. Others sat waiting in their vehicles before they went out again.

Groups of people gathered outside the police cells. Some looked worried as they waited to hear the fate of their relatives who were locked up. A man was overheard complaining that on his visit to the charge office earlier, he witnessed a bail application being conducted for someone arrested for not wearing a mask. “For not wearing a mask,” said the man in disbelief.

Another man was busy on his cell phone and said pointing to the cells., “I am waiting for my brother, I don’t know when he will come out, he is still inside.” His brother was also arrested for not wearing a mask.

Opposite the Hillbrow police station in the parking lot, several Nyalas vehicles were parked. A police water cannon was amongst them. Outside the parking lot on the road, stood an armoured ambulance.

Said Gauteng Emergency Medical Services (EMS) JP Von Benecke as he explained their readiness for the crossover. “We were not actually going to do a big deployment tonight because of the curfew. But then this morning we woke up to news of the relaxation of most of the regulations, including the curfew, so we decided to do a proper deployment using the armoured ambulance.”

In another parking area adjacent to the police station, EMS personnel and volunteers were seen in a briefing before setting up their makeshift triage area.

At 8.30pm a convoy stood outside the police station. Said an unidentified officer, “It’s past 8pm, Hillbrow is now declared a red zone, it is too dangerous to go into without the Nyalas.” But a drive through the streets revealed otherwise. The streets were unexpectedly quiet. Music blared from a few pubs and other drinking spots, prompting cops to yell at patrons and making calls to managers asking them to close down the establishments.

A question was posed to one of them, asking why establishments should close when the curfew has been lifted? His response, “It’s for their safety. This is Hillbrow, it’s dangerous, anything can happen here. It might be quiet now but that can change.”

“Hillbrow changes like the weather,” chuckled another police member.

Back at the police station, sirens blared as a convoy carrying SAPS Provincial Commissioner, Lieutenant General Elias Mawela and other high ranking officials from within SAPS and other law enforcement agencies arrived. They were returning from a roadblock on the M1 North, part of their Operation O Kae Molao. The operation boasted successes from Johannesburg, Ekurhuleni, Tshwane, Sedibeng and the West Rand claiming that more than R250,000 worth of fines had been issued.  More than 480 people had been arrested for crimes ranging from possession of unlicensed firearms, drunk driving and dealing in drugs.  Items seized included drugs, alcohol, dangerous weapons, firearms and ammunition.

Later, in a show of force, the convoy of Nyalas patrolled the streets of Hillbrow and Braamfontein. “Happy New Year,” shouted a little girl from a building. Very few people were out on the streets, some whistled at the convoy and others shouted profanities.

In Braamfontein, a brief stop was made where Mawela addressed the media. He said he was happy at what he had witnessed and, “All credit to the residents because they heeded to our call. The station commanders of Hillbrow and Johannesburg Central police stations engaged with communities during the week and encouraged them to enjoy themselves in a responsible manner. The way the residents are conducting themselves, I wish they can continue to do that even beyond the cross over. It would be pleasing for me to see Hillbrow forever clean.”

The convoy then made its way back into Hillbrow where they stopped. A woman peeked from the window of her flat as the convoy pulled up. The streets were empty but residents stood at their windows shouting while others lit fireworks. “Watch out, they just threw a beer bottle,” warned a policeman.

By the time the clock struck midnight, the shouting intensified and the fireworks had gotten bigger. Four men emerged from a building and danced in the street as they made their way to the group of law enforcement officials. “Go back,” shouted police and private security personnel. A few moments later a few women from a block of flats were seen taking a selfie with a policeman, they danced around and more people made their way out of the building. A woman stood atop a car dancing while others cheered her on.

Police kept a watchful eye but then asked her to get off. As if they were happy that the curfew was over they danced at the entrance of the building. A policeman later dispersed the small group with pepper spray. This did not go well with a man who swore at police from behind the security gate.

Back at the police station in the makeshift triage area paramedics were seen bandaging the head of a stab wound victim. But paramedics were pleased at the uneventful evening. “Every time the alcohol ban is lifted it’s been crazy. People have been irresponsible. I expected to see people party as much as they can and being irresponsible, more assaults from alcohol related injuries and its not here this year,” said volunteer paramedic Graham Musgrove,

“I’m happy we didn’t get action tonight. The little bit of action we had is like any other night of any other day of the week. We used to get things thrown at us before but now we have people thanking us as we drove around with the convoy. It’s not something I have experienced before so I am very surprised.”

A member of a Hillbrow based security company also commented, “Quietest new year ever and I have been in Hillbrow for 50 years. I only heard two firearms shooting.”

At 2am the parking area was empty except for vehicles from EMS. Shortly thereafter the armoured ambulance had brought another stab wound victim to the makeshift triage area. He was assessed and then taken to hospital.

Von Benecke said “People have been reasonably well behaved, I expected worse to be honest. It’s not the worst night spent in Hillbrow. Most of the buildings that we went into had a lot of alcohol usage and rowdy crowds that we had to deal with but nobody was really aggressive. Hillbrow had quite a few assaults, a lot of stabbings but nothing too serious. Four or five patients were transported to Helen Joseph Hospital.”

At the time of publishing the Department of Health were unable to give statistics on the trauma cases for Helen Joseph but provided statistics for Chris Hani Baragwanath Hospital. Between 12pm and 12am (31 December 2021 till 1 January 2022) a total of 95 trauma cases, with the majority being assaults and stab wounds, had been treated. This compared to their zero trauma cases for 2021’s new year due to the curfew. DM