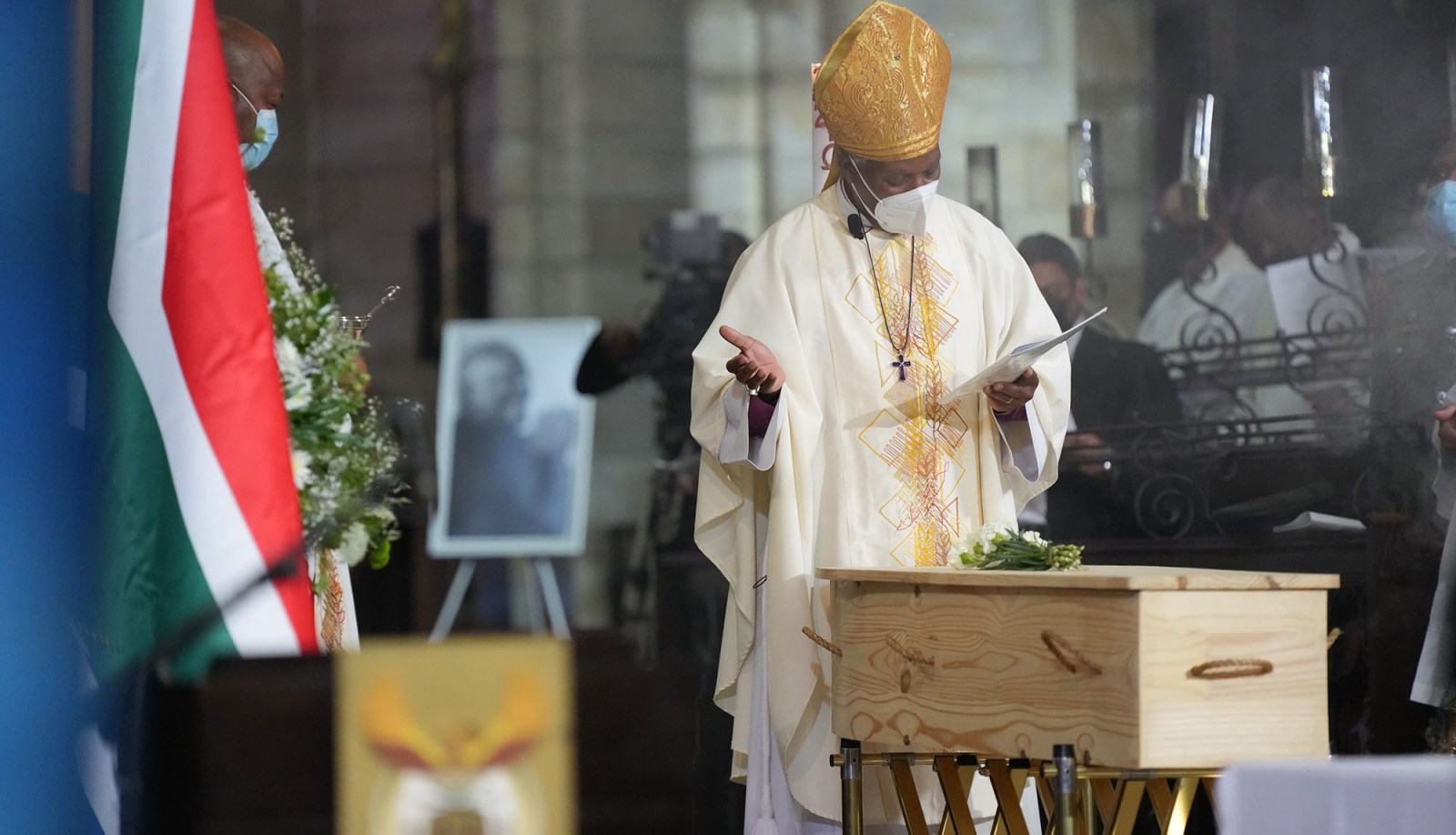 The New Year began with a farewell. The funeral of Archbishop Emeritus Desmond Mpilo Tutu saw dignitaries, clergy, family and friends braving wind and rain to be present at St George’s Cathedral on Saturday. After a week of mourning, memorials and tributes, the funeral was intended as a reflection of Tutu’s life – modest, heartfelt and steeped in the symbols of his faith.

In Archbishop Emeritus Desmond Mpilo Tutu, the principles of justice, kindness and humility were interwoven with a long-lived authenticity – a trait for which he was loved and respected by many. Though he was small in physical stature, he was a giant among others both morally and spiritually.

These were the words of the Right Reverend Michael Nuttall, retired Bishop of Natal, when he acted as the preacher at Tutu’s funeral. The ceremony took place at St George’s Cathedral on Saturday, presided over by the Most Reverend Dr Thabo Makgoba, Archbishop of Cape Town

“Desmond’s response to grave injustice came from the depths of his being, and often in response to what he called the divine nudge,” said Nuttal. “His was not a harsh, ideological quest for justice. Always, it was grounded in mercy.” Nuttal went on to recall Tutu’s warm smile, and the “inclusive, all-embracing love” in which he lived.

Tutu was the first black priest to be Anglican Dean of Johannesburg, Bishop of Lesotho, General-Secretary of the South African Council of Churches and Bishop of Johannesburg. In 1986, he became Archbishop of Cape Town and head of the Anglican Church of southern Africa. He is remembered by many South Africans as an activist and moral authority, and for his role as chair of the Truth and Reconciliation Commission in the aftermath of apartheid.

The funeral was a Requiem Mass, which is a Eucharist service offered on behalf of the dead. This was appropriate given the Arch’s commitment to the Eucharist in life, according to Reverend Wilma Jakobsen, one of the first women to become an Anglican priest in South Africa, ordained by Tutu in 1992.

“The Eucharist was central to [Tutu’s] life. He celebrated Eucharist every single day, come what may,” said Jakobsen.

While only 100 people attended the service at the cathedral due to Covid-19 restrictions, a large screen outside Cape Town City Hall allowed members of the public to view the ceremony from the Grand Parade.

Archbishop Tutu’s coffin, a simple pine box with a small bunch of white carnations, was carried into the cathedral by his grandchildren. During the course of the ceremony, symbols of the Arch’s faith – a white stole and a chalice – were placed on the coffin.

A vote of thanks on behalf of the Tutu family was delivered by Reverend Naomi Tutu, daughter of the Archbishop.

“Thank you for loving our father, grandfather, husband, uncle, brother, brother-in-law. Many of the messages we have received said, ‘Thank you for sharing him with the world’. It is actually a two-way street, because [while] we shared him with the world, you shared part of the love you held for him with us…and so we are thankful,” she said.

Ramaphosa spoke of Tutu as a humble and brave human being, who spoke for the oppressed and downtrodden.

“How fitting is it that his parents named him Mpilo when he was born, meaning life. In his life, he enriched the lives of all those that he met, and all those who got to know him,” said Ramaphosa.

Tutu’s activism was not limited to any one situation or group. During his lifetime, he was involved in the treatment and care for people living with HIV/Aids, the empowerment of women and campaigns against child marriage across the globe, according to Ramaphosa. He was also an outspoken supporter of the Palestinian cause and LGBTQI+ rights.

Within South Africa, Tutu was a voice for justice both during and after apartheid. “Archbishop Desmond Tutu has been our moral compass, but he has also been our national conscience. Even after the advent of democracy, he did not hesitate to draw attention – often harshly – to our shortcomings as leaders of the democratic state,” said Ramaphosa.

Ramaphosa went on to say that while Mandela was the father of South Africa’s democracy, Archbishop Tutu was the spiritual father of the new nation.

“The most fitting tribute we can pay to him, whoever and wherever we are, is to take up the cause of social justice for which he campaigned throughout his life,” said Ramaphosa. “We celebrate him for what he was – life. Mpilo.”

After the funeral, the Arch’s remains were taken from the cathedral for a private cremation. In the coming days, his ashes will be interred at the cathedral as part of a private ceremony. DM