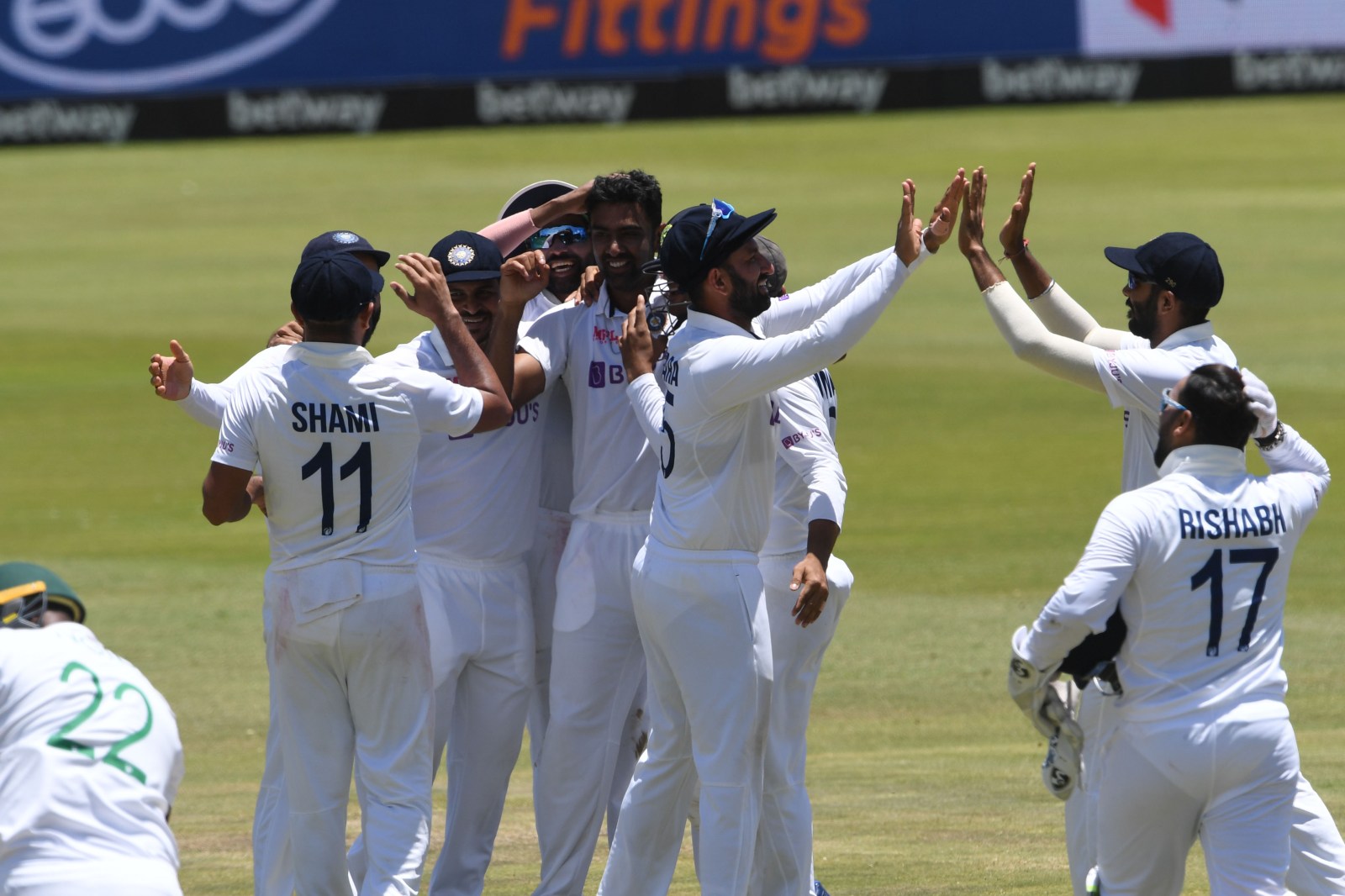 Ravichandran Ashwin of India celebrates the wicket of Lungi Ngidi of the Proteas during Day 5 of the 1st Betway WTC Test match between South Africa and India at SuperSport Park on 30 December 2021 in Centurion, South Africa. (Photo: Lee Warren / Gallo Images)

India have set themselves up for a first series win in South Africa with an emphatic 113-run win in the first Test at SuperSport Park on Thursday to heap further pressure on coach Mark Boucher.

South African wicketkeeper Quinton de Kock announced his retirement from Test cricket with immediate effect hours after the first Test between the Proteas and India ended.

De Kock was due to miss the second and third Tests of the series because of the imminent birth of his first child, but his announcement to retire was surprising.

“This is not a decision that I have come to very easily,” De Kock said in a statement. “I have taken a lot of time to think about what my future looks like and what needs to take priority in my life now that Sasha and I are about to welcome our first child into this world and look to grow our family beyond that.

“My family is everything to me and I want to have the time and space to be able to be with them during this new and exciting chapter of our lives.

“I love Test cricket and I love representing my country and all that it comes with. I’ve enjoyed the ups and the downs, the celebrations and even the disappointments, but now I’ve found something that I love even more.

“In life, you can buy almost everything except for time, and right now, it’s time to do right by the people that mean the most to me.

“I would like to take this opportunity to thank everyone who has been a part of my Test cricket journey from the very beginning. To my coaches, teammates, the various management teams and my family and friends – I couldn’t have shown up as I did without your support.”

Earlier this year De Kock was a centre of controversy after players were instructed to take a knee as an anti-racism gesture at the T20 World Cup. De Kock initially refused but later conceded to the dictum issued by Cricket South Africa (CSA).

The former Test captain’s talent as a wicketkeeper set him apart on the world stage, with 232 dismissals, including 221 catches and 11 stumpings. De Kock has also taken the third most catches in the inaugural ICC World Test Championship – 48 in 11 matches (47 catches and a stumping) and has a personal best of six dismissals in an innings, against England in Centurion in 2019.

​​“It’s sad to lose a player of Quinton’s calibre at what we still see as the prime of his career and relatively young life, but family, as we all say here at CSA, is everything,” said CSA acting CEO Pholetsi Moseki.

“He has been a loyal and proud servant of the Proteas team for the last seven years and we are glad that we have not lost him from the game entirely.”

The tourists were in control of the match from day one after captain Virat Kohli won the toss and elected to bat. The Proteas were well beaten by the time Kohli’s accomplished bowling unit returned after lunch on day five to mop up the Proteas tail with three wickets in 12 balls following the break.

Once again the Proteas’ batting failed to support the bowling cast as they were dismissed for fewer than 200 runs in each innings.

“In Test cricket facing the new ball and opening is not easy. You get a good ball and you go and sit and watch the rest of the game. That’s the nature of the beast,” Elgar said. “Aiden and I have had the rough of the green but we are very mindful that we need to start well.

“He (Pietersen) has had a bit of a rough start and it doesn’t reflect on him as a player. He is extremely talented – one of our better players in the first-class system. The stats don’t reflect his ability. I feel for him. I know he wants to make a play and is maybe a little bit anxious. We need to, as a leadership group, try and give him a better opportunity to try and contribute.

“You need runs to compete and it’s safe to say we didn’t get that in our first innings,” Elgar said. “They bowled well with the new ball and the nature of Test cricket is that you’ve got to compete against the new ball. The way they started was something we struggled against. We know what it’s like scoring 250-plus runs here.”

The loss was only South Africa’s third-ever defeat in 27 matches at a ground that has historically been a fortress for the home team.

Man-of-the-match KL Rahul struck a brilliant 123 in India’s first innings, his seventh Test match hundred, six of which have come outside of India. The hundred was the highest score of the match as South Africa’s captain, Dean Elgar’s typically gritty innings of 77 in the second innings was the next closest to the century mark.

When no play was possible on day two due to persistent rain, there were doubts whether a result was possible in the first Test match of the three-match series.

However, a flurry of wickets on day three, which included Ngidi picking up three wickets, adding to his three from day one, meant he finished the first innings with six for 71 runs. India ended their first innings on 297.

Mohammed Shami then returned the favour on the pitch that suited fast bowling, taking five for 44 runs in the Proteas’ first batting innings. In the process, Shami claimed his 200th Test wicket, becoming only the 11th Indian to achieve the mark.

South Africa was dismissed for only 197 with Temba Bavuma providing the only real resistance. He top-scored with 52 runs, striking 10 boundaries. No other Proteas batter scored more than 40 runs in the innings.

India was forced to bat for a second time on day three. This time there were no heroics from their openers as Mayank Agarwal was dismissed late on day three by Marco Jansen. A total of 18 wickets fell on the day.

Jansen, who stands over two metres tall, made his Test debut for the Proteas. The left-arm fast bowler presented excellent second innings figures of four for 55, dismissing India’s captain Virat Kohli in the process. The 21-year-old came back well after he had an edgy start in the first innings, having claimed one wicket for 69 runs.

Alongside Jansen, Proteas spearhead bowler Kagiso Rabada claimed superb figures of four for 42 in the second innings. The pace bowling pair struck regularly, ensuring no Indian partnership passed the 50-run mark, as they were dismissed for 174 on the fourth day.

Needing a SuperSport Park record fourth-innings chase of 305 runs to claim an unlikely victory, skipper Elgar provided a sliver of hope as he ended day four on 52 not out and the Proteas on four for 94.

Temba Bavuma and Elgar allowed South African supporters to dream in the morning session on day five, accruing a 36-run partnership. First innings bowling hero, Shami, eventually got the wicket of Elgar for 77, which initiated another Proteas batting collapse.

Bavuma once again provided resistance for the Proteas as he finished on 35 not out. Unfortunately, the Proteas tail did not wag and offered the diminutive right-handed batter with little support. Wiaan Mulder, Jansen, Rabada and Ngidi faced a cumulative 22 balls before each being dismissed, leaving Bavuma stranded at the non-strikers’ end.

This victory caps off an incredible year of Test cricket for India. They played 14 Tests, winning eight, drawing three and losing only three times. One of their three defeats, however, came in the final of the World Test Championships, a match that New Zealand won by eight wickets in Southampton in June.

The second match of this series, the New Year’s Test match starts on 3 January at the Wanderers, in Johannesburg. The Proteas will be desperate to turn things around as quickly as possible as a loss at the Bullring will secure the Test match series for India and ensure their first Test series victory in South Africa.

South Africa remain confident in their ability and will look to recent Test match success against the West Indies in June this year, according to Elgar. DM