Creature comfort: No animal is turned away from this wildlife rehab centre 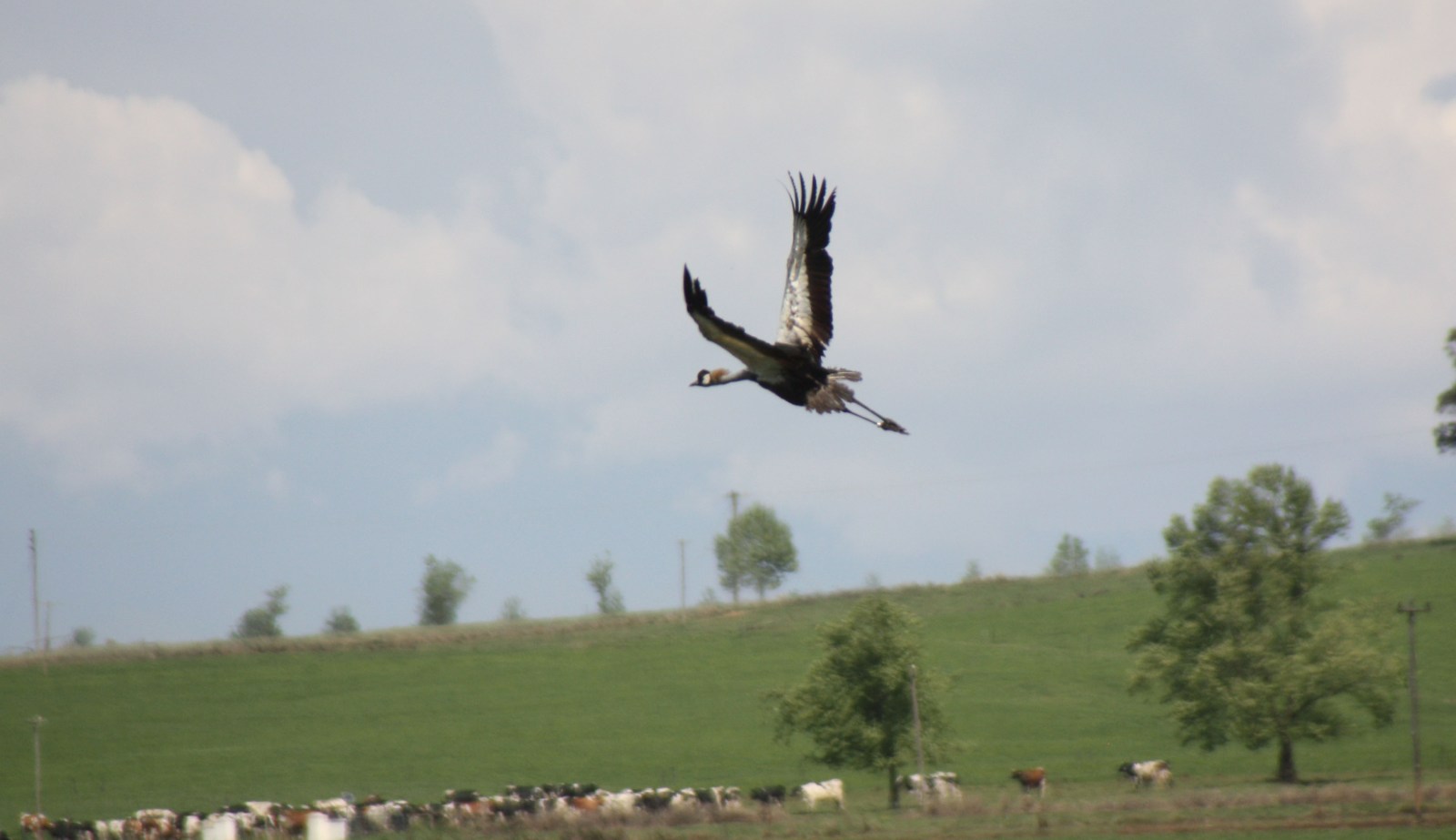 No patient is too big or too small for FreeMe Wildlife, an animal rehabilitation centre in KwaZulu-Natal.

As human and wildlife habitats overlap and collide, there are the inevitable victims. Owls hit by vehicles, antelope caught by dogs, fences or a combination of both. Orphans of all kinds.

In the parking lot at FreeMe Wildlife, Howick, KwaZulu-Natal, an elderly man with wisps of hair blowing mist-like from his head is cradling a box as a staff member stands on tip-toe to see inside. Odds are that it contains a fledgling bird – it’s that time of the year – but it could be anything. FreeMe treats up to 2,000 patients annually. A cane rat was on the examination table just 30 minutes earlier; a baby large-spotted genet, minus a tail, is recovering in a sterile intensive care unit. Outside are antelope, serval kittens, appalled-looking owls.

“Someone brought in a rhino beetle once,” says Michaela White, front office and tortoise project coordinator, as we stare at bristly hairs left by the unfortunate cane rat. The horned insect, nicknamed Douglas, had hitched south in a tourist’s car after his holiday in Zululand. Douglas was not fed to another creature, nor released nearby, but returned safely to his place of origin –just in case his genetics proved incompatible with local variants.

It sounds amusing, but it shows the lengths to which this wildlife treatment and rehabilitation centre goes to meet its mandate. Creatures from all over the province end up here after accidents, often caused by encounters with people or human infrastructure. Threatened or protected species such as cranes, Cape Parrots, oribi and pythons have been rescued over the years, but standard locals – speckled pigeons, hadedas – are also welcomed. FreeMe checks in every patient (each has a file), and a network of specialist vets provide care, often charging nothing but the cost of the materials.

The level of medical care can be impressive: Martin de Scally of Hilton Veterinary Hospital remembers a serval with balance problems that was taken to St Anne’s in Pietermaritzburg for an MRI. Then there was a young barn owl, operated on by Margie Roach of the Umgeni Veterinary Clinic – with virtual help from a UK-based orthopaedic raptor surgeon, Neil Forbes. Together they repaired a leg that had been broken and healed at right angles. The patient was successfully released.

All animals are equal, but some do elicit extra empathy or urges to anthropomorphise, says FreeMe’s Tammy Caine (organisational development officer and raptor specialist).

Take the young aardvark Garfunkel, found dehydrated, emaciated and alone on a game farm. A local vet in Estcourt, Delon Alwar, stabilised him and rushed him to FreeMe on a drip. “He spent the next few days in ICU, and Kirsten, our clinic manager, literally slept on the floor in the room next door to monitor his condition. We received help and advice on his care from facilities in South Africa, Africa, and abroad. Garfunkel spent the next two weeks dipping between life and death.” Sadly, as does often happen, death won.

That Garfunkel’s story was told without sugar-coating is part of what makes FreeMe special. Under new management since 2016, it is an impressively paraat facility. It has no hodge-podge outbuildings and the lawns are freshly trimmed. The 10 staff wear uniforms, interns and volunteers commit long-term. And the food in the many fridges must be fresh enough for human consumption. (Although some volunteers have blanched at having to serve foods such as silkworms, mice, fish, day-old chick mortalities and the odd crab to patients.)

CEO Wade Whitehead believes FreeMe offers “an essential service” in a world where the ever-increasing human population is decimating habitats. A former entrepreneur, game guide and camp manager, he is compelling, near evangelical about the job, being proactive and professional at all times. “[Through hard times] we never sat down or gave up, we remained actively open 24/7 throughout the Covid pandemic and the recent riots and unrest.”

He believes rehabilitation is about people as much as it is about wildlife – “the rescue of an animal starts with a single person who cares enough to want to do something”, he says. Also: “People accept the lives they lead and do the things they do because no one ever showed them an alternative… We have a vision of helping humanity live on Earth. This means living in harmony with nature, as we are nothing without it.”

Yet FreeMe is a no-human-visitors zone, the better to ensure patients’ survival and release. One of only 20 NSPCA-accredited rehabilitation facilities in the country, there are no ambassador animals or educational tours – or paid volunteer programmes. Young antelope are fed via bottles affixed to a fence to prevent imprinting on people. Even medical treatment is best given under sedation, says De Scally – so a jackal with a broken leg can’t receive the follow-up physio and care a dog might welcome. Hard decisions are made when an animal won’t recover sufficiently to survive in the wild.

Caine learnt this early in her career when treating a lanner falcon with an injured spine and paralysed leg. After eventually being able to stand, it was sent to a captive facility against the advice of her mentor. But when it died a year later, the autopsy found essential muscles had atrophied further, slowly. All Caine had done, she says, was “give him 12 months of agony that ultimately led to his death. It was a lesson I have never forgotten.”

“Captivity is not a psychological state wild animals understand or adapt to,” Whitehead says. A successful release must always be the key objective. Caine too believes that a tamed wild animal has a kind of Stockholm Syndrome, which inflicts psychological if not physical damage.

No-visitor principles, however, make fundraising tough. This is where FreeMe’s social media skills come into play. A mix of hope, humour, adorable baby animals and visceral reality flickers across their feeds; ups and downs are shared as they happen. There’s the Blue Crane chick that must be fed just enough to grow 5% of its body weight a day – otherwise its leg bones could break or become deformed (and cranes need legs!). A Cape Eagle Owl that didn’t make it is laid out next to a Spotted Eagle Owl victim to help teach identification. A succession of wobbly antelope in various states of repair, warthog piglets, bats being x-rayed: stories of individuals unfold in fascinating detail.

Most staff contribute to these social media feeds, which help the NGO attract donations from larger sponsors, like the Brigitte Bardot Foundation, to local children – and the artist who contributed a painting of Garfunkel.

Advocacy and research keep staff busy, too. A current success story is the Tortoise Project, a five-year-old collaboration with Ezemvelo KZN Wildlife and A Rocha South Africa to safely reintroduce tortoises to the wild. This on-the-face-of-it simple task has until now been illegal – to protect wild populations from pathogens the adventurers may have picked up, as well as to prevent genetic mixing through interbreeding with individuals with uncertain backgrounds. But also: most captive tortoises simply aren’t fit enough to forage successfully. They die.

For five years, FreeMe has worked with conservation authorities to change this status quo. In November, following quarantines, vet tests and a stringent fitness programme, five endemic Natal-hinged tortoises and 11 eastern hinged tortoises were finally released in Zululand. This could open the door to establishing protocols that allow hundreds of trafficked tortoises to be released in the future.

FreeMe is also establishing a new professional rehab centre to cover Zululand. It will focus on smaller endangered and critically endangered species. Permits have been issued, and land secured in the Greater Ukuwela Conservancy.

It matters: Facilities that can deal with injured wildlife in a humane and ethical way will be needed as people continue to encroach on wild habitat through need or greed. On the most basic level, as De Scally says, people have a responsibility to the creatures harmed by our activities. On another, as Whitehead and Caine suggest, an urge to alleviate suffering and rescue animals in need feeds something vital in people, too. DM/OBP

Creature comfort: No animal is turned away from this wildlife rehab centre