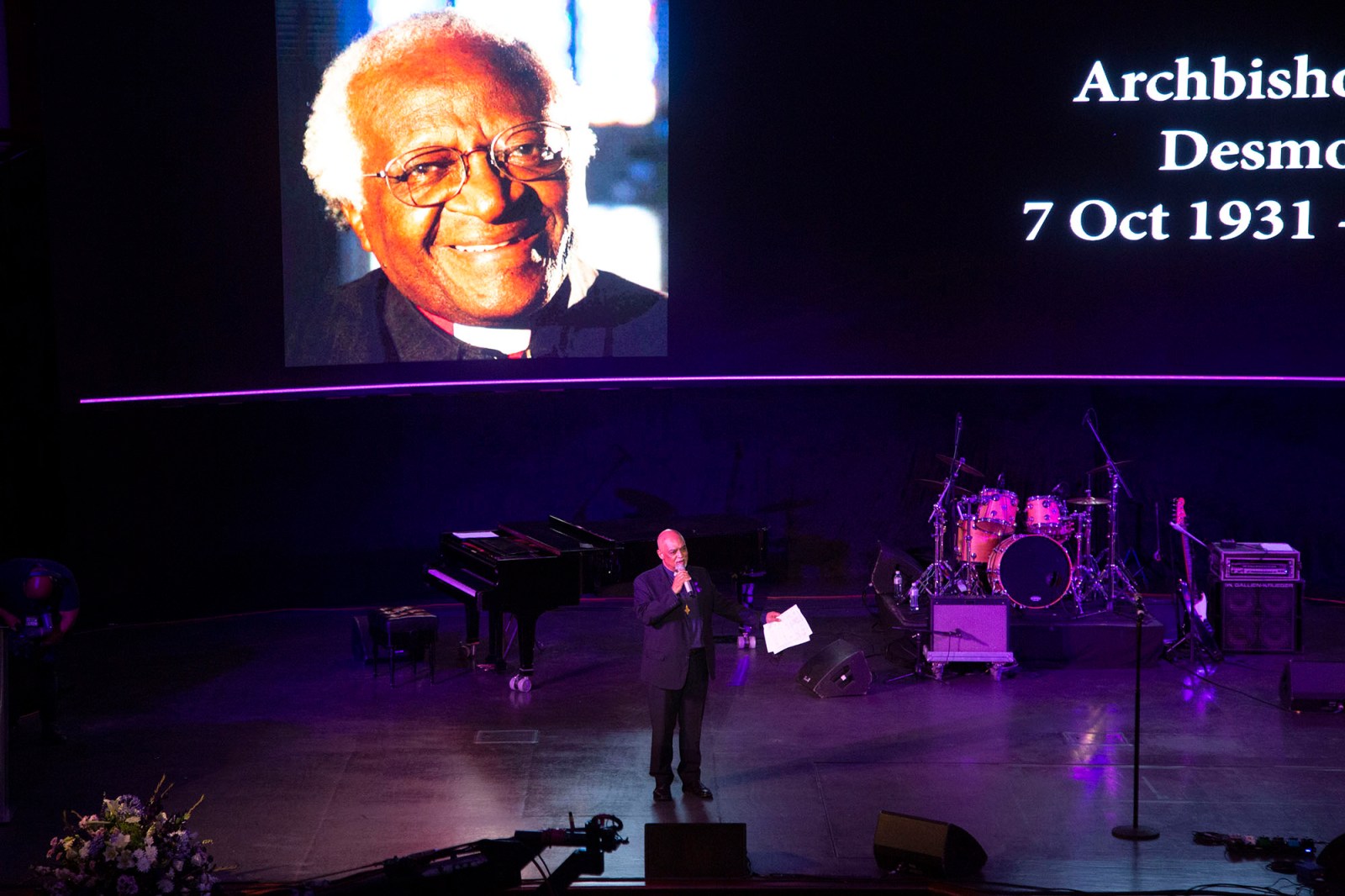 The Archbishop will lie in state on Thursday and Friday at St George’s Cathedral. Members of the public will be permitted to visit the cathedral and pay tribute to Tutu during this time.

A number of years ago, the Very Reverend Michael Weeder, Dean of St George’s Cathedral, overheard Archbishop Desmond Tutu telling a story about a man who died and got a tour of heaven from the Archangel Gabriel. In a remote part of heaven, the man saw a group of people under a tree and asked the angel, “Wie is daai mense?”

And the angel responded, “Shh, those are Christians. They think they are the only ones in heaven.”

Weeder went on to describe Tutu as a man who understood that “heaven is only truly beautiful if everybody is there”. He was acting as emcee at Wednesday’s interfaith tribute to Archbishop Tutu at Cape Town City Hall, which was organised by the City of Cape Town.

The tribute was attended by Tutu’s family, as well as a variety of political and faith leaders. Speeches were given by Mayor of Cape Town Geordin Hill-Lewis; Western Cape Premier Alan Winde; South African politician and activist Cheryl Carolus; and Dr Mamphela Ramphele, chairperson of the Archbishop Desmond Tutu IP Trust.

“[Tutu’s] life showed that our politics can be big, not small; that our society can be all-encompassing, not exclusive; that most people are basically good and worthy of respect… and that the easiness with which we give way to hate is wrong,” said Hill-Lewis.

Though the number of people within City Hall was limited due to Covid-19 restrictions, large screens outside the hall allowed members of the public to watch the memorial from the Grand Parade.

The memorial was a celebration of music and the diversity of faith, with performances by the Desmond Tutu tribute band, Zolani Mahola, Fancy Galada, Ard Matthews, Jonathan Butler, the South African Youth Choir and the Gugulethu Tenors.

The Archbishop was remembered by Winde for his role in the fight against HIV/Aids, tuberculosis and the Covid-19 pandemic in South Africa.

“If we are all to follow in the Arch’s words of making that little difference, if we all live our lives just taking a small amount of the values that he lived with, can you imagine the different world, the different country, the different province […] city or town in which you [would] live… the change that will be made,” said Winde.

Carolus reflected on Tutu’s activism during apartheid, saying that even during moments of great difficulty, the Arch kept to his beliefs and stood against those actions he considered wrong.

“The Arch took on governments, corporations, the Church and society at large, globally, around what it means when we assert that we are all created equal before God,” said Carolus. “He asserted this with simplicity, and he asserted that discrimination was an affront to his beliefs as a Christian.”

Tutu drew deeply from the well of Africa’s greatest gift to humanity, which was the philosophy of ubuntu, according to Ramphele.

“Can we dare to recommit to live a life that is infused by the values of ubuntu, as the Archbishop taught us? Because then life, love, hope, faith, become so much easier… if we simply return to the essence of being human,” she said.

The Archbishop will lie in state on Thursday and Friday at St George’s Cathedral. Members of the public will be permitted to visit the cathedral and pay tribute to Tutu during this time. DM