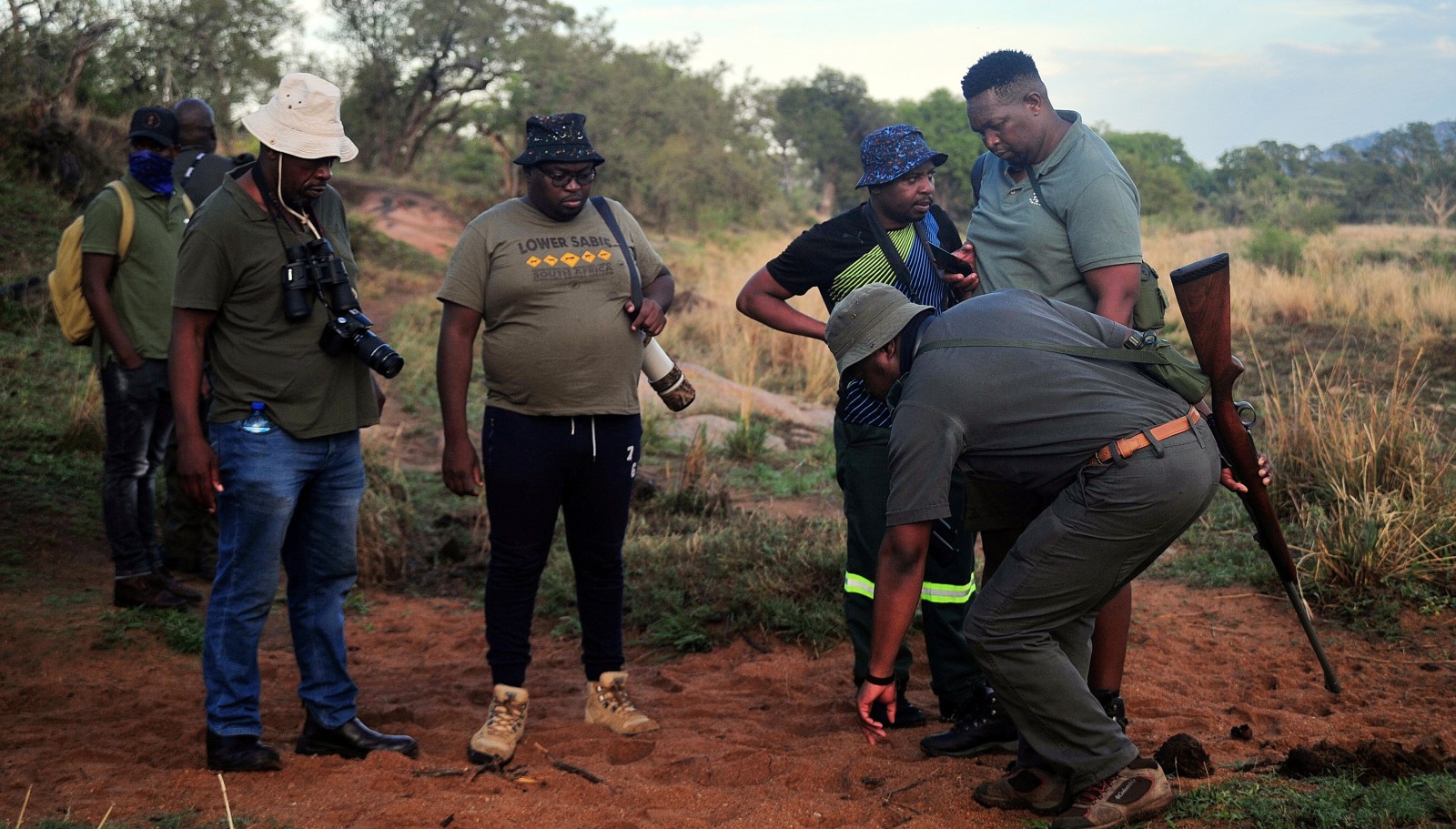 Members of African Safari Brothers on a bushwalk near Berg-en-Dal in the Kruger National Park. (Photo: Lucas Ledwaba / Mukurukuru Media)

The number of black people visiting game parks still does not reflect the demographics of the country. A social group started by wildlife photographer and tour operator Rodney Nombekana is set to change this.

A ripple of laughter filled the cool early-morning air when our guide Excellent Hlatshwayo removed his rifle from the dashboard of the game-viewing truck.

“Let me get my walking stick,” he said as we prepared for a 4km walk through Big Five country near the Berg-en-Dal rest camp in the south of the Kruger National Park.

We were a group of about eight men, energised by the sweet morning air and the adventure that would unfold. The previous night we had slept through pouring rain in tents pitched at the campsite after an evening of excited chatter around the fire.

It was another outing by the African Safari Brothers, a social group started by wildlife photographer and tour operator Rodney Nombekana. The group’s mission is to recruit more black brothers to embrace the great outdoors lifestyle – camping, hiking and visits to wildlife reserves from which they were previously excluded. Membership of the group, however, is not racially exclusive.

Writing in the Sowetan in 2011, Fanyana Shiburi, a journalist who later joined the SA National Parks (SANParks) communications department, captured the history of black exclusion from parks thus: “For at least six decades, Kruger [National] Park was the symbol of white domination and black exclusion. This has been the experience of the people living on the borders of Kruger National Park and black South Africans in general. Black South Africans were never allowed to go into the park, except as labour to the exclusively white management.”

Although the laws of exclusion went with the demise of apartheid in 1994, Nombekana, who spends most of his life in the bush with clients, has noticed the number of black people visiting game parks still does not reflect the demographics of the country.

“Somehow I always feel lonely and left out when I’m in the bush and holidaying. And I feel that there’s not enough people who come from the same places that I come from who actually come and be in the bush together,” Nombekana said when he explained why he started African Safari Brothers.

He began by mobilising a few friends through a WhatsApp group “to share ideas about spending time in the bush”.

This was two years ago, and even though the movement was interrupted by the outbreak of Covid-19 in 2020, the group that started with only seven people now has 115 members who come from different parts of the country.

“Any brother who wants to come and join us and is passionate about nature and the outdoors, this is the place. It’s all about the love for nature. So there’s no prerequisite for joining the African Safari Brothers. It doesn’t matter if you are a lawyer, if you are somebody who sweeps the streets, who does whatever, everybody is welcome here,” said Nombekana.

“Some people don’t even know how to get to the Kruger National Park. It’s like a land that is foreign to them. For me, there’s something wrong with that. This is the heritage that should not only be enjoyed by everybody but protected by us,” he said.

The Safari Brothers make regular visits to the Kruger, which also include an imbizo, at which new members are formally introduced, and members are encouraged to network and exchange ideas. Part of the imbizo includes orientation of new members regarding the rules and general conduct expected from visitors to the park. Nombekana hopes the members will extend their visits beyond the country’s borders.

She said the park, through its Social Economic Transformation Department, engages with structures such as community forums, people and parks and other relevant committees to build capacity and assist local communities to come up with ideas to develop and implement sustainable conservation projects in their communities.

As part of initiatives to bolster racial quotas at game parks, SANParks has established a special package for stokvels and travel clubs. These offer special payment terms and discounted rates for selected national parks on particular dates.

“There are over 800,000 registered stokvels and even more formal and informal travel clubs or groups in South Africa. Travel clubs that qualify include groups of people who have special interests, such as hiking or biking but also just groups of friends and large families who enjoy group travel.”

Mukwevho said there are environmental education centres in the Kruger that serve as “an excellent outdoor classroom for gaining an ecological understanding of natural areas, especially for the learners. These are linked to programmes such as Kids in Kruger, Walk and Learn on the Wild Side and Kids in Parks.”

Our 4km walk, which took a little more than two hours, was a breathtaking adventure into Big Five territory.

We stopped to learn valuable lessons from the excellent guidance of Hlatshwayo and his colleague Bridgeman Zulu. These included tips about animal behaviour, the use of different plant species, how to read animal spoor and, most importantly, how to behave to survive in the wild.

Hlatshwayo caused great excitement among the men when he showed us where an elephant had dug up a tree to consume its roots, which, apparently, gives it the power of a rocket during mating. A pair of hyenas about 50m away raised their heads to check us out as we walked by in single file and in silence. In the distance, a tower of giraffes looked down curiously at us like bored security guards. In the end, our two guides had no use for their rifles, perhaps justifying Hlatshwayo’s earlier reference to his as a walking stick. – Mukurukuru Media/DM168