SPORTS TEAM OF THE YEAR 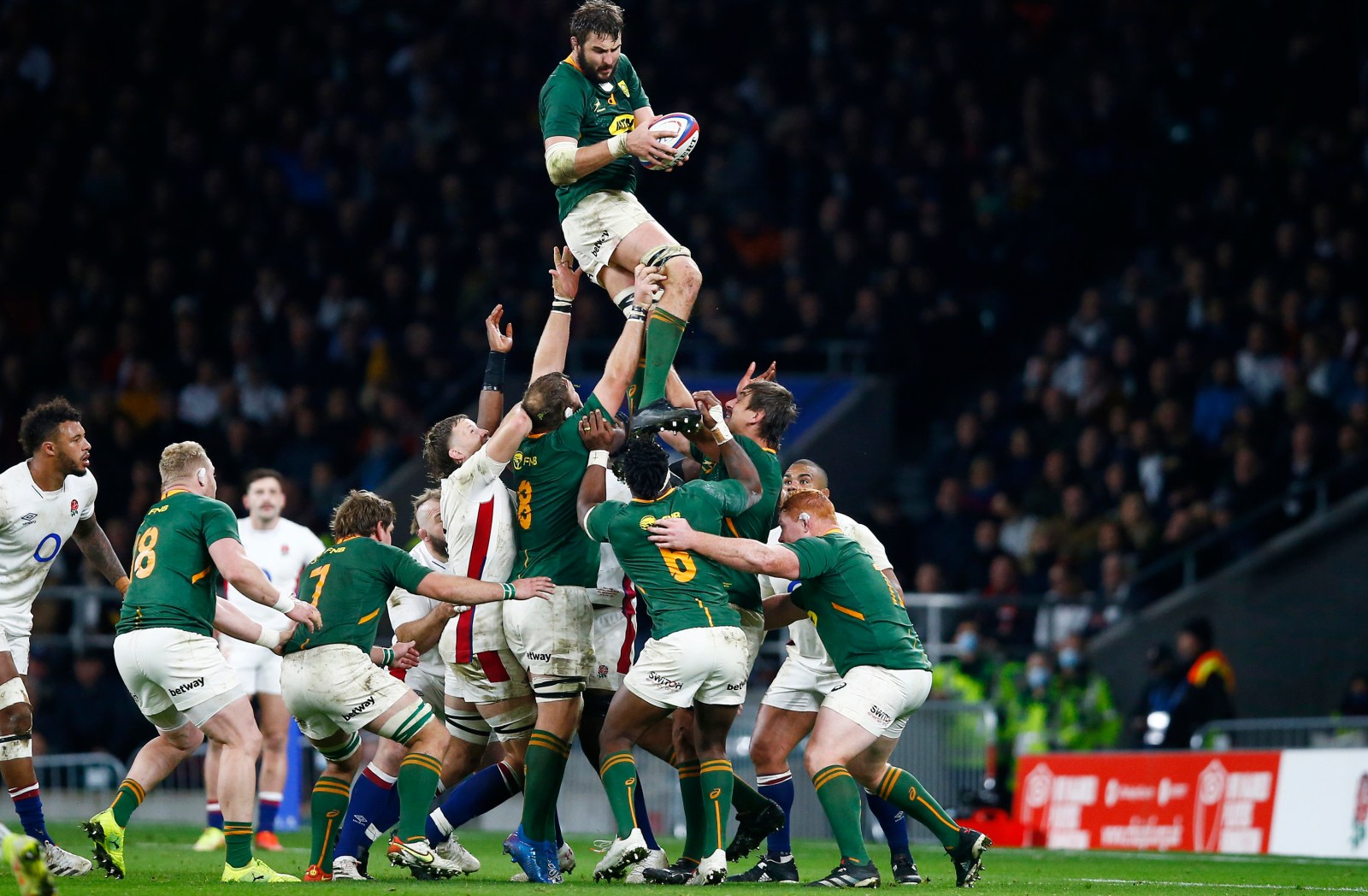 The Springboks against England could be a regular sight in a revamped Six Nations from 2024 if SA Rugby's dream is realised. (Photo: Steve Haag/Gallo Images)

Despite setbacks during the most challenging year in Springbok rugby history, the Boks regained the number one spot.

A casual glance at the Springboks’ record in 2021 might lead to some debate as to why they have been named our team of the year. They played 13 Test matches and lost five. In other words, they only won 63% of the time.

But, sometimes, such broad statistics are misleading because that simple metric only tells a small tale of the most challenging year in Springbok rugby history.

First, from the moment the Springboks won the final of Rugby World Cup (RWC) 2019, their attention moved to playing and winning the 2021 series against the British & Irish Lions.

It only comes around every 12 years and competing in a Lions series is considered the single biggest Test rugby achievement outside of a World Cup. In a perfect world, it is a monumental challenge – but the lead-up to the 2021 series took place in anything but a perfect world.

The Covid-19 pandemic scuppered the Springboks’ entire 2020 season, which meant losing 12 Tests-worth of player and team development. No one would have guessed in the afterglow of winning RWC 2019 that, barring one Test against Georgia, the Lions would be their next opponents.

Before their July Test against Georgia, the Boks had not played a match in 20 months.

Never before, and hopefully never again, will a squad of players and coaches have to endure what the Boks of 2021 suffered while still performing at an exceptional level.

In all, the Springbok squad spent 18 weeks in various bio-bubbles, which came on top of various bubbles for players at club level. To say it was mentally challenging on the players would be an understatement.

In a normal year, the 2021 calendar would have been one of the toughest in Bok history. It was scheduled to include 14 Tests, which is a staggering amount.

The Lions duly arrived as scheduled, after a reshuffle of the touring dates because of the rise of the Delta Covid variant. The Boks had scheduled two warm-up Tests against Georgia before the Lions challenge. But, after winning 40-11, the second Georgia Test was cancelled as Covid cut a swathe through the Bok camp. Georgia coach Levan Maisashvili would fight for his life for months in a SA hospital as a consequence.

Following that game, Bok coach Jacques Nienaber, captain Siya Kolisi and 11 other players either contracted Covid-19 or were in isolation. It disrupted preparations significantly and, by the time of the crucial first Test at an empty Cape Town Stadium, the Boks were underdone. They lost 22-17 in a game marred by several bizarre decisions by Australian referee Nic Berry, which would become the subject of a now infamous Rassie Erasmus dissection.

The upshot, though, was that the Boks needed to become the first team since Australia on home soil in 2001 to lose the first Test of the series and go on to win it. After the controversy over Erasmus’s video, the Boks produced a stellar second half of the second Test to win it 27-9, scoring 21 unanswered second-half points. In the process they lost star flank Pieter-Steph du Toit and scrumhalf Faf de Klerk to season-ending injuries.

But in the deciding third Test, star wing Cheslin Kolbe, who – a few weeks later – was also ruled out for the rest of the season, scored a brilliant try with deft footwork to set the stage for a dramatic climax.

It was 37-year-old veteran Morné Steyn, making his first Test appearance in five years, who stepped off the bench and slotted the match- and series-winning penalty. His kick three minutes from time gave the Boks a 19-16 victory and rekindled memories of Steyn’s similar heroics 12 years earlier against the Lions at Loftus Versfeld.

Although the series was a tight arm-wrestle, with plenty of sniping off the field, winning it was the Boks’ major priority. The remainder of the year was used to build depth and experience, establish combinations, and grow the attacking game plan.

They ended up beating the All Blacks at the Gold Coast for another significant scalp and three of their five defeats were with the last kick of the game. It was a season that could have been better in terms of results with a little more luck, but it was also a year of success.

Despite the challenges, the Boks finished 2021 deservedly as the number one-ranked team in the world. DM168

The Italian football team has had an impressive year. They won the Uefa Euro 2020 title (held in 2021) after being undefeated in the tournament and beating England 3-2 on penalties in the final at Wembley Stadium in London.

Italy rose from bitter lows to clinch the Euros title. Their lowest point came in 2018 when they failed to qualify for the World Cup – the first time in 60 years that they had not made it. Roberto Mancini, a former Manchester City manager, took over the reins as manager of the Azzurri in May 2018, eventually leading the team to European delight on 11 July.

The veteran Juventus centre-back duo of Giorgio Chiellini and Leonardo Bonucci formed the foundation on which the Italian success was built.

Skipper Chiellini led from behind as the 37-year-old centre back, along with the rest of the Italian defence, did not concede a goal in the group stage matches. In fact, they did not concede more than one goal in any of their matches in the knockout stage of the tournament.

Italy scored many of their goals from their fast and incisive counter-attacking play. They won their group stage matches 3-0, 3-0 and 1-0 against Turkey, Switzerland and Wales, respectively.

Italy performed greater than the sum of their parts with no real “superstars” among their ranks. Despite their lack of a talisman, they scored the joint highest number of goals in the tournament, with 13 goals across their seven matches.

In the final against England at Wembley, Juventus defender Bonucci – at 34 years and 71 days old – became the oldest scorer in a Euro final.

Italy went on to win the final 3-2 on penalties to claim their first Euro title in 53 years. – Keanan Hemmonsbey/DM168