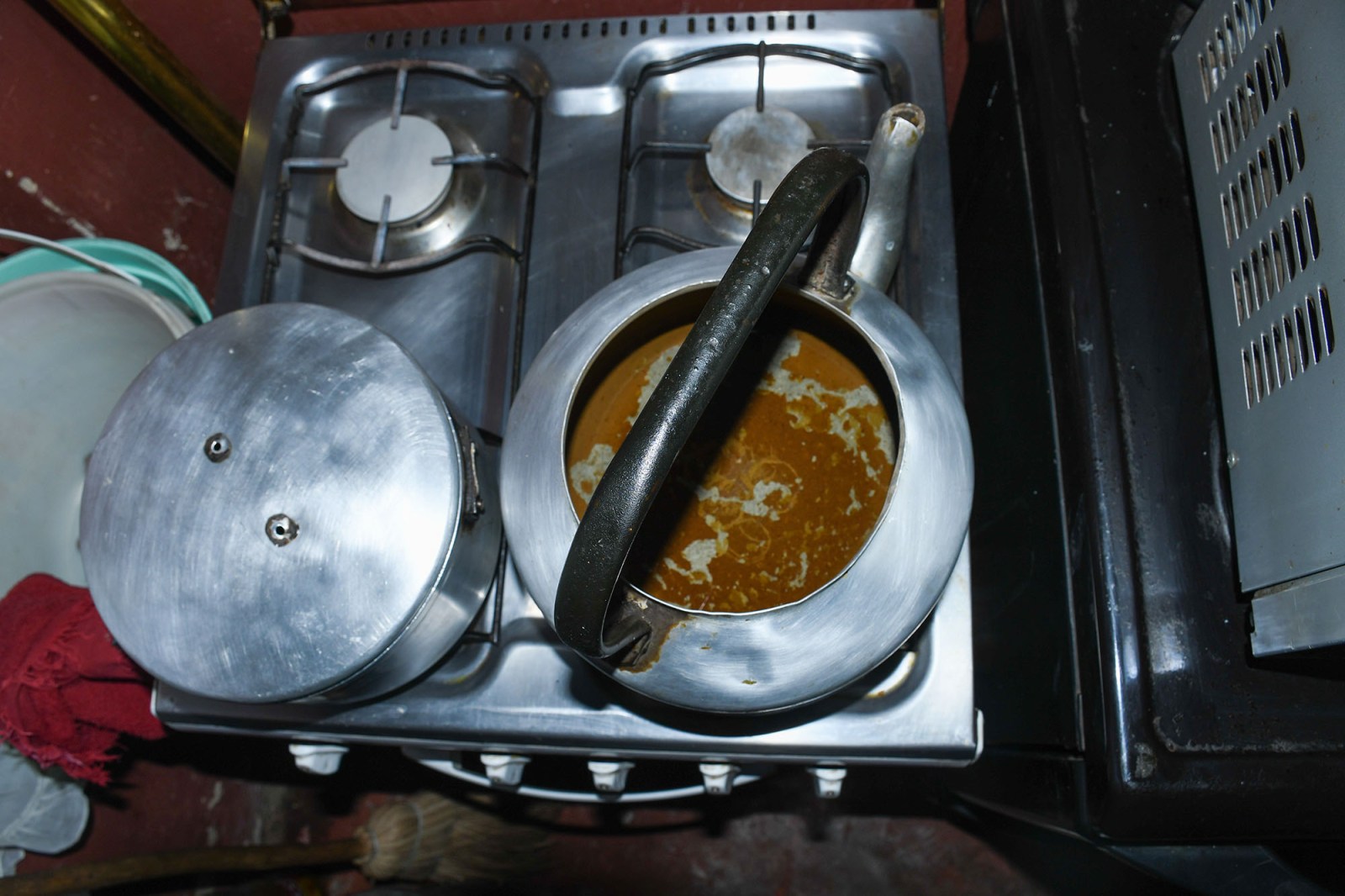 The kettle that Cavlyn Fredericks found the mercury in, on the gas stove in her home. (Photo: Julia Evans)

On 18 November 2021, Cavlyn Fredericks of Kliptown found beads of metal in her kettle while she was filling it up with water, which turned out to be Mercury. How it got there remains a mystery.

Read the previous Daily Maverick article on it here.

After facing initial inaction from her local ward councillor, Cavlyn Fredericks contacted the media, and a Daily Maverick journalist visited her home on 30 November to collect the sample of what was thought to be mercury.

The sample was taken to Modderfontein Laboratory Services, where Dennis Gregory, managing director of analytical chemistry said, after observing the sample, “after years of working in a laboratory that the sample is mercury.”

However, Gregory was stumped as to where the mercury could have come from.

Cavlyn was worried for her family’s health, as one day after finding the mercury, her whole household of seven people – including her three children aged two, six and 12 – started experiencing stomach pains, nausea, vomiting and diarrhoea. At least five other households in the area reported similar symptoms, and the residents – who have lived in Kliptown their whole lives – said they have never got sick from the water before.

The World Health Organisation reported in 2017, “Mercury may have toxic effects on the nervous, digestive and immune systems, and on lungs, kidneys, skin and eyes”.

Read about Mercury and its impact on health from the World Health Organisation here.

Initially the Fredericks’ local clinic didn’t help the family, but after Mathee spoke to an environmental health practitioner who advised the clinic manager to write a referral and a Daily Maverick journalist visited the clinic, the family was taken more seriously.

The Fredericks were first referred to Lilian Ngoyi Hospital, from where they were referred to Chris Hani Baragwanath Hospital.

Cavlyn’s three children were admitted to Chris Hani Baragwanath Hospital on 6 December and stayed for three days, while various urine and blood tests were conducted.

The results are outstanding, but the family was taken seriously, with the hospital seeking advice from several Poison Control Centres, and follow-up appointments scheduled for the next three months, the first of which will be in January.

After the substance had been confirmed as mercury, the issue was reported to a senior environmental health practitioner in the City of Johannesburg (COJ) on 1 December 2021.

Johannesburg Water spokesperson, Puleng Mopeli, said in a media statement on 15 December 2021, “Johannesburg Water would like to confirm that the laboratory test results of all four sample points did not detect mercury as samples were found to be compliant with drinking water standards as per SANS 241 (2015).

“The entity prides itself with providing residents with good quality drinking water with the monthly water quality compliance reports available to the public from our website.”

Mopeli told Daily Maverick that the results found that the water samples collected at the Fredericks’ residence on 3 December were clear of mercury, E. coli and coliform.

Daily Maverick also sent a water sample from the Fredericks’ kitchen tap for microbiological testing to Modderfontein Laboratory Services. The Microbiological analysis of the tap water (conducted according to methods stipulated in SANS 241) found no aerobic bacteria, E. coli or coliform.

Gabisile Mbhele of the City of Johannesburg Environmental Health Division, who conducted the inspection on 3 December, told Daily Maverick that they could only comment on their microbiological results.

“We were clear and transparent to you and to the family,” said Mbhele. “Why we did the microbiological testing is because of other symptoms [diarrhoea, vomiting, nausea etc] they showed which were not in line with mercury. So we wanted to also clear that up.”

Their results found that bacteria, coliform and E. coli levels in the water sample taken from the Fredericks’ house were compliant with the South African National Standard (SANS) 241 Drinking standards.

However, a water sample collected from a house across the yard as a control, showed high bacteria and coliform levels that are non-compliant with SANS standards. Mbhele said that Johannesburg Water visited that site to conduct an investigation on 22 December 2021.

“But from the Fredericks’ and the surrounding houses in that yard, that water is safe to drink. What we don’t have is the mercury, which is a mystery,” said Mbhele.

Dr Cindy Stephen, head of the Poisons Information Centre at the Red Cross War Memorial Children’s Hospital, told Daily Maverick that while mercury is very toxic and we shouldn’t play with it, a once-off small exposure to it, as in this case, is not necessarily of grave concern.

“Mercury gets problematic when one is exposed to it regularly or to large amounts,” explained Stephen. “Chronic exposure to mercury is an issue, as with artisanal miners who may be exposed to it every day.”

Analytical chemist Dennis Gregory agreed, saying that while one must always be aware that mercury is toxic, “it only becomes ‘dangerous’ with long exposure”.

When asked how she feels about the situation now that the results were out, Cavlyn said, “it shows there’s no bacteria in our water as per results, but it’s clear there was mercury in the water. We saw it, Gabisile saw it.”

As to where the mercury came from, that remains an enigma. DM/OBP